Does the Orient Express Live Up to Its Glamorous Golden-Age Reputation?

The journey begins at the Nyugati train station in Budapest. More specifically, it begins in a finely appointed, Belle Epoque–era waiting room, tucked away, unbeknownst to most passersby, right next to the train tracks. At one end of the room is a pair of large, ornately carved and gilded doors. When a uniformed porter slips through them, I get a glimpse of something shiny and black, decorated with gold trim, the subject of more than a century of fantasies and the reason I’m here: the Belmond Venice Simplon-Orient-Express. 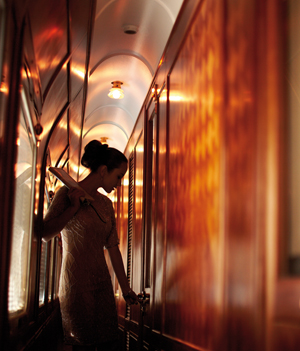 Over the next two days, the legendary train officially called the Belmond Venice Simplon-Orient-Express, will take passengers through Hungary, Slovakia, Austria, and France, where we will disembark at Calais to cross the channel for England. Of the 40 or so guests waiting to board in Budapest, most of them are couples and most of them, I will learn over the next 30 hours, are taking the trip to celebrate that coupledom in some fashion. It is a train for honeymoons and anniversaries, birthday surprises that took months of secretive planning, and last-ditch efforts to find that elusive spark. In other words, it is a train for romance. But as the only passenger traveling alone, I’m here for quite another reason: murder. In particular, the one that occurs in Agatha Christie’s Murder on the Orient Express, the 1934 novel that has lived in the collective imagination for nearly 85 years, and that will no doubt charm moviegoers this weekend with the Johnny Depp–starring blockbuster by the same name.

I first read Murder on the Orient Express in high school. But like a lot of Christie fans, it was the subsequent rereadings that have secured its place in my heart. It’s the book I turn to when I am sad, can’t sleep, am hungover, am nervous . . . my own literary Xanax. Though the plot centers around a murder, the book’s enduring appeal (and cinematic potential) is the window it offers into a disappeared era: one not yet touched by the atrocities of World War II nor the coming technological advances; a world of manners, evening dress, and, of course, luxury train travel. Ever since I first picked up the book, I’ve fantasized about riding the Orient Express, and I’m far from alone.

First launched in 1883, the Orient Express has, to some degree, always existed in the realm of the imagination. For one, it never actually went to the Orient. It was first dreamed up by Georges Nagelmackers, a wealthy Belgian banker’s son, after a trip to America impressed upon him the advances of train travel. The maiden voyage traveled from Paris to Romania, where VIP guests alighted on a ferry to Istanbul; it was the press that dubbed it—quite sensationally—the Orient Express, and the name stuck. Even before she rode it, Christie referred to the Orient Express as the “train of her dreams.” 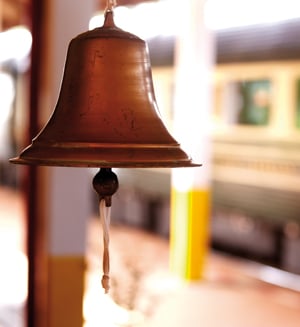 But let’s get back to the beginning of the journey. The room we are milling about was originally built as a private waiting hall for Emperor Franz Joseph I and his wife, Elizabeth, in the 1870s. It’s not open to the public and, though its massive green doors are hard to miss, most people don’t even know it’s there; in fact, I wander for some time around the train station before an attendant at the information booth directs me to the correct place. When I arrive, a white-gloved porter whisks away my bag, and I’m invited to take a seat in one of the polished wood armchairs. Unlike the rest of the station, which is like any other train station these days, all fluorescent lighting and fast-food joints, this room is quiet, richly furnished, distinctly Old World, and hidden, a slightly dusty corner the world seems to have forgotten. This sets the tone for the entire trip. For though the Orient Express is known the world over, there’s also something a bit secretive about it. Or as Max, an acquaintance I make on the train, will put it as we relax in the bar cart to live jazz later that night: “It’s like we’re in a bubble within a bubble.”

At its maximum length, the train consists of 17 carriages. Three of those are restaurants, one is a bar, and the rest are sleeper cabins. All of it has been lovingly restored down to the finest detail, from the Art Deco marquetry designed by René Prou in sleeping car 3309 to the Lalique glass panels in dining car 4141. Max is wrong: The Orient Express isn’t a bubble. It’s a time capsule.

Well in advance of arriving in Budapest, guests are given brochures describing all this and a few rules: No smoking, no cell phones or laptops in public areas, no jeans, no trainers; the dress code is “smart casual” during the day and evening or cocktail attire at night. “You can never be overdressed aboard the Venice-Simplon Orient Express,” the brochure reads. If you aren’t sartorially up to snuff, you may be asked to change. 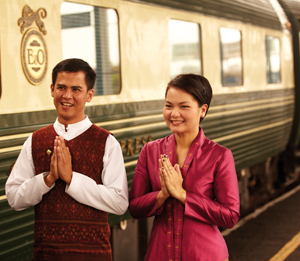 I am assigned to cabin D1, which is identical to all of the twin berths on board. It consists of a washbasin hidden behind two curved doors, a large window that can be rolled down by turning a crank at the sill, a collapsible table, small footrest, and—the pièce de résistance—a banquette that, come night, will be transformed into my bed. As someone who has lived in a series of small apartments in New York for 12 years, I am delighted by the economy of this; at my insistence, Rupert, my indefatigably smiley cabin steward, shows me how the magic happens. If I were traveling with a partner, a second bed would be flipped up, rested on top of metal posts, and connected to the floor by way of an upholstered ladder. Like all the other cabins, D1 is the original 1920s model. When Christie first rode the Orient Express in 1928, she would have traveled in a cabin exactly like this, except, being in second class, she shared it with a rotating cast of characters on her way to Istanbul.

Christie had long fantasized about riding the Orient Express, but it wasn’t until her first marriage fell apart that she finally embarked to do so, in order to get to Baghdad. Ignoring all warnings and advice to the contrary, the author resolved to make the trip alone: “I should find out what kind of person I was . . . I knew well enough that I was a dog character; dogs will not go for a walk unless someone takes them. Perhaps I was always going to be like that. I hoped not,” she wrote in her autobiography. Christie needn’t have worried. On that very trip to Baghdad she met her second husband, archaeologist, Max Mallowan, whom she wound up traveling the world over with. The two spent their honeymoon on the train.

After settling in, Rupert pours me a glass of Prosecco. Then I’m left to my own devices. And lack of devices. There’s no television, no reliable Wi-Fi, and no telephone in the cabins (for that matter, there isn’t a toilet either—those are located at the end of each train car). 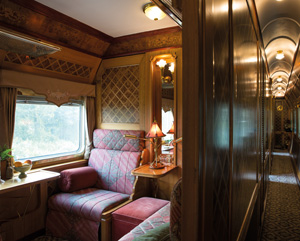 Preferred cabin pastimes include: conversation, crossword puzzles, books, card games, and—my personal favorite—looking out the window as if you might have a dark secret lurking in your past. But mostly what is done on board is eating and drinking, two activities greatly facilitated by the onboard chef. Guests are visited in their room by a mâitre d’ and given a reservation at either the first or second seating. They will be reminded of the dress code. At the appointed time, guests make their way to the designated table, where a three-course meal (for lunch) and a four-course meal (for dinner) will be served to them with the efficiency and delicacy of the finest French restaurant. After either lunch or dinner, they will almost certainly make their way to the bar cart to enjoy a cocktail (the signature is Agatha Christie)—or two or three—while listening to the onboard pianist (an Italian who has played on the Orient Express for nearly two decades) or the jazz band (a Berlin trio named the Whisky Drinkers).

In New York, it’s not uncommon to dine in a fancy restaurant next to a man in a baseball cap and sneakers; indeed, in certain circles, dressing down is a status symbol. I was doubtful that men would really wear tuxedo jackets as the brochure had suggested. Well, they did; many, if not most, were in black tie, and the women wore evening dresses. This, and the fact that many guests are here to celebrate special occasions, adds to the festive feeling in the bar cart. Sometimes after you down your second Agatha Christie, as you gaze about at your tuxedoed and diamond-dripping compatriots, you lose track of time, and not just the hour but the decade and the century, so that when a minivan appears alongside the train on a country road, it’s a bit of a shock.

The bar cart is where the real magic of the Orient Express happens. Everyone is dressed up and, having paid a good deal for the privilege, determined to have a good time. There’s limited seating in the bar, so you inevitably have to share a drinks table. Without phones or the possibility of a smoke break, we’re forced to do something that’s become even rarer than train travel these days: Talk to one another. I meet a series of fascinating people, including one criminal psychologist, and a stylish blonde traveling with her husband to celebrate their 15th anniversary. I nickname her Poirot. The couples share marriage war stories and heartwarming tales of first dates, lips loosened no doubt by alcohol but also a camaraderie unique to journeymen. We are, after all, a bunch of strangers stuck on this train; there is no way on or off until we reach our destination. It was the perfect setting for Christie’s murder mystery, but it’s just ideal for those in search of lighter intrigue.