Commonwealth's origins can be traced to a redoubtable group of 11 golfing enthusiasts who in May 1915 formed the Murrumbeena Golf Club and later aspired to a home on the Melbourne Sandbelt. 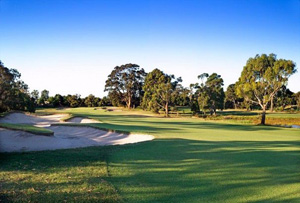 Designed by club professional Sam Bennett, the first 12 holes opened early in 1921 and the full 18 were in play by 1924. In 1926, Charles Lane, the Club Captain, travelled abroad to study golf architecture and met British designer Harry Colt, a former partner of Alister MacKenzie.

Lane brought what he learned home and put the finishing touches on Commonwealth's greens and bunkers. He did much of the work himself, often being seen stripped to the waist and digging out bunkers.

Among the big events played on the course are the 1967 Australian Open, which Peter Thomson won by seven shots, and the 2010 and 2011 Women's Australian Open, both won by Yani Tseng of Taiwan.

The Club has also been included in Tom Doak's list of 31 courses 'among the first I would take a good friend to see'. He said that…

Commonwealth is revered for its challenging driving holes and subtle sloping greens which call for accurate shot making when playing from the fairway.

The trees that line these fairways have long been considered amongst the finest stands in golf seen in Australia. Credit for their selection, planting and tender care in the Club's formative years is due in a large part to longterm Captain and Life Member, Alec Brahe.

In a threeyear programme completed in 1938, all 18 greens were redesigned and returfed, a completely new system of greenside bunkering was implemented, many fairway bunkers were altered and new teeing grounds were constructed. This work resulted in the strategic character of the course for which Commonwealth became famous. It was planned and supervised by former New Zealand Open champion Sloan Morpeth who was Commonwealth's manager for 33 years.

Since the 1930s, additional purchases of land and minor changes to the course layout have been made. For example, in the mid1960s the 10th and 11th holes were redesigned by Sloan Morpeth as Course Architect following the acquisition of additional land along Old Dandenong Road known as Miller's Paddock.

Then, in 1992, the Club commenced a programme to improve the drainage on all greens. The opportunity was also taken to modify the surrounds of several greens and to carry out bunkering, mounding, drainage and reticulation work. The final stage of this programme included alterations to the 6th and 12th holes and the construction of a new 7th hole. Kevin Hartley, the architect retained by the Club to assist with the greens drainage programme, designed these changes.

One of the classic par 3s on the Melbourne Sandbelt, the 9th at Commonwealth presents a devilishly tricky tee shot.

For the first timer the perils are not immediately obvious from the tee box, but if you miss the green short, left, right or long - which doesn't leave many options you can be assured of a difficult shot back to the putting surface.