Perfectly located at the edge of the Great Barrier Reef, the Hamilton Island Golf Club has some of the most spectacular views and settings of any golf course in the world. 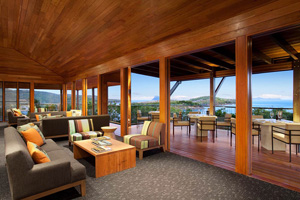 Designed by champion golfer, Peter Thomson of Thomson Perrett, the Hamilton Island Golf Club on neighbouring Dent Island is the only championship golf course on its own island in Australia, and the perfect destination for your next golfing holiday.

From conception and construction, through to its daytoday operations, the Hamilton Island Golf Club is strongly committed to preserving the pristine environment of the world's largest protected marine area the Great Barrier Reef Marine Park.

The island's natural and rugged beauty, together with its mountainous terrain affords stunning 360 degree views across secluded coves and beaches to adjacent islands and the mainland beyond.

The stunning Chris Beckinghamdesigned Clubhouse is ideally perched to catch the soft sea breeze and to take in the stunning views of Passage Peak and the sparkling Coral Sea. The Clubhouse offers a stylishly relaxed restaurant and bar, along with a well stocked pro shop and ladies and mens locker rooms including showers. The staff can assist with a variety of services including bookings, rental clubs, oncourse refreshments and comprehensive expert tuition to help finetune your game.

Getting to Hamilton Island is easy as it's the only island in the Whitsundays with a commercial airport. There are direct flights from Sydney, Brisbane, Melbourne and Cairns and simple connections from other major Australian cities. Once on Hamilton Island, Dent Island is just a short ferry ride from the Hamilton Island Marina. 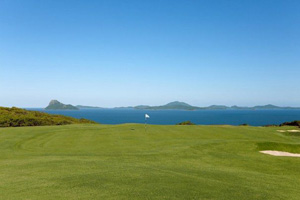 Peter Thomson designed this course to challenge all levels of golf enthusiasts, from casual players to professionals. The course is designed as a series of holes strung along ridges and played across steep valleys.

Its layout works with the landform, presenting generally broad fairways taking the 'line of least resistance' to avoid the steeper, more sensitive areas. Changes in course elevation, restricted landing areas and everpresent breezes provide a definite challenge from the back tees and enjoyable resort golf from the forward marks.

The par 71, 18hole course features two distinctly different nine hole circuits returning to the central Clubhouse with panoramic views of Dent Passage and Hamilton Island. The outward nine holes are a more compact layout around the centre of the island and the inward nine are strung out along the ridges to the south.

Courage and instinct are required on this signature hole. Take particular notice of the breeze, as it will be more influential on club selection than just distance.

Played to an elevated target, with bunkers surrounding the green on three of the four sides, this shot needs to be practically perfect to find the putting surface. The bail out, if there is one, is to the left of the green where a relatively easy pitch and putt will follow. Anything short or right off the tee will need to be reloaded, as chances of playing from the trees will be nil. Take three and proudly go to the next.