Huntingdale Golf Club, located in the heart of Melbourne's worldfamous Sandbelt region, is one of Australia's premier championship golf courses. Consistently rated as one of the best conditioned courses in the country, Huntingdale is also the Sandbelt's youngest. 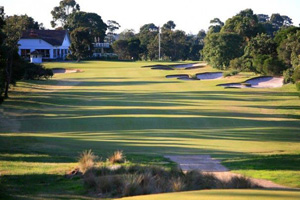 Rising to fame in 1979 with the inaugural hosting of the Australian Masters, Huntingdale has emerged as one of the most recognisable golf courses in Australia. Since 1979, Huntingdale has played host to some of the most famous names in golf, including Jack Nicklaus, Arnold Palmer, Seve Ballesteros, Greg Norman, Nick Faldo and world number one, Tiger Woods.

Huntingdale's golf affiliations go back to 1896, when Surrey Hills Golf Club was established. The Club prospered until 1914, when it disbanded on the outbreak of the First World War. By 1941, after moving from the Surrey Hills site, to Canterbury Road in Box Hill then Doncaster Road, Doncaster, club members elected to move into the Sandbelt region, and onto land previously used for coursing by the Melbourne Hunt Club. When the course reopened in 1941, it took the name Huntingdale Golf Club.

The course design at Huntingdale was entrusted to renowned English golf architect C.H. (Hugh) Alison and is today the only example of his work to be found in Australia. Alison is probably best known for his golf architecture partnership with H.S. Colt and together the pair were responsible for many of England's best known courses including Sunningdale and Wentworth.

The course greets golfers with superbly manicured fairways, strategic bunkering, large true greens and great memories of the game's finest players gracing the fairways in the Australian Masters. This combination of features ensures that Huntingdale challenges the best professionals and the latest technology.

The greens at Huntingdale are true and fast and are kept in 'Masters' condition throughout the year. Players hitting wayward shots to the far side of the greens can anticipate long undulating putts. The final stretch of holes contain some of the toughest and finest finishing holes in the world.

"If I could play golf for the rest of my life, for fun, I would play courses like Huntingdale. It's almost like something magical…"

At 515 metres most golfers will need to keep their bravado in check and choose discretion over valour when considering the possibility of reaching the green with their second shot.

Initially the fairway bunker on the right hand side must be avoided at all costs, especially for the long hitters contemplating reaching the green in two. For the more conservative player, positioning the second shot to leave a short iron to the green is the paramount concern. The 6th green is quite long, making sound club selection vital in avoiding long treacherous putts.