One of the jewels in the Melbourne Sandbelt, Kingston Heath enjoys an enviable reputation for its superb conditioning all year round. 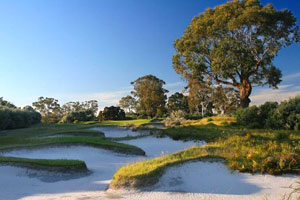 Shortly after World War One, prominent Melbourne solicitor Stanley Dutton Green led a committee of members from the Elsternwick Golf Club in a search to acquire sufficient land within the Melbourne Sandbelt to construct their own championship golf course. The search for the ideal site brought them south to Cheltenham, to a small gently undulating parcel of land with perfect sandy soil and a number of excellent natural features.

Designed by Dan Soutar with bunkering from Dr. Alister MacKenzie, and constructed by Royal Melbourne greenkeeper Mick Morcom, the course was ready for play in 1925. It was officially the longest course ever seen in Australia. Measuring a little over 6200 metres, its par of 82 included 12 par 5s and just two par 3s.

Nowadays as a par 72 course, many golfers are grateful they were not around to tackle the Heath in its infancy armed with hickory shafted Brassie and Niblick.

Since the 1948 Australian Open, Kingston Heath has regularly hosted national and international tournaments, including seven Australian Opens and one Women’s Open. Having first played at Elsternwick in 1909, the club marked its centenary in 2009 with a new clubhouse and by staging the Australian Masters, won by Tiger Woods. 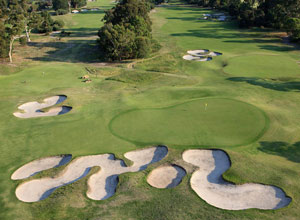 While most courses in the modern era are built on over 100 hectares, the 18 holes at Kingston Heath were built on only 50 hectares. The course is perfectly manicured. Its bunkering and clever use of dips and hollows fool the nonobservant golfer. If you wildly deviate from the fairway, the rough (comprising long grass, tea tree and sandy scrapes) will test your ability to get the ball back into play.

The 14th hole is a longish par 5 which, depending on the wind direction, can tempt the golfer into reaching the green for 2. One golfer, Roger Mackay, did better than that in the 1987 Victorian Open when he holed his second shot for an albatross. Roger went on to win the tournament.

The three par 3 holes are a feature of Kingston Heath and show off one fantastic feature of this great golf course - the classic, natural bunkering. In particular, the 15th hole is a real test - one that’s not necessarily needed towards the end of your round.

The remaining finishing holes are long par 4s and can ruin an otherwise good score. The 16th is known in golfing circles as the hole where Greg Norman took a 9 on his way to losing the 1987 Victorian Open - the very same tournament where Roger Mackay had his famous albatross.

Avid students of golf dream of standing on the tee of Heath’s 15th. This hole is undoubtedly one of golf’s finest par 3s, and the opportunity to duel with this golfing icon is an opportunity to be savoured.

Yawning chasms protect the green on both sides. A tee shot that doesn’t find the putting surface leaves a player contemplating either a diabolical chip back to the green or a challenging bunker shot. The temptation is to go at the flag, but landing in the centre of the green and taking just two putts is usually the more prudent plan.