Situated in the beachside suburb of Cheltenham, Victoria offers a golfing experience on par with the world’s best. The beautifully landscaped course is designed to challenge both amateur and professional golfers. It is one of the region's tougher courses, with lightning-fast greens and some of the best bunkering in Australia. 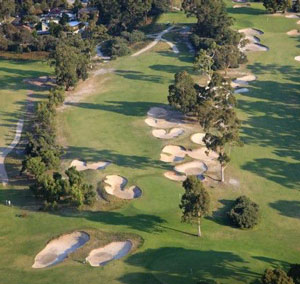 The Victoria Golf Club was founded in 1903 by Mr. Bill Meader and was initially located at Fishermans Bend in Port Melbourne. The Club moved to its current location in 1927 and the new course was designed by Oscar Damman and Bill Meader with the assistance of the doyen of course architects, Dr. Alister MacKenzie.

The Club has an incredible history in world golf and in 1954, perhaps one of the most remarkable feats in world golf occurred. VGC Club Members, Doug Bachli and Peter Thomson set the Club on the world stage when Bachli won the British Amateur Championship and Thomson won the first of his five British Open Championships. Both trophies sat side by side on the mantelpiece in the Members Bar. In recognition of this feat and the contribution of these two great members to the game of golf, the Club named a room in their honour - the Bachli Thomson Room. Club member Geoff Ogilvy has also had recent international success, winning the 2006 US Open.

The Clubhouse is regarded as one of the best in Australia and includes 15 twin-share accommodation rooms. The contribution of these houseguests to the ‘fabric’ of the Club is significant. The hospitality experiences offered by the Club are exceptional and the awe of first-time guests ensures that they become regular visitors to the Club.

As Peter Thomson said, "Some clubs have a special character that sets them apart. It is not necessarily the quality of the course or the accommodations of the buildings that distinguish them. It is more essentially the membership, past, and present, and the file of achievements over such a period of decades that creates such a tradition. Victoria Golf Club is such a Club".

The course has changed considerably in the last 15 years, under the guidance of Michael Clayton. It is still unmistakably a course featuring all of the design characteristics of a traditional Sandbelt course. These courses typically feature wonderful green complexes with strategic bunkering and the effects of the weather determine the most appropriate line of play.

Typically in tournament play, holes 11 to 16 play a significant role in determining which player will hold the trophy aloft on the final day. Holes 11, 12 and 13 are all par 4s requiring accuracy and placement off the tee followed by an approach shot to the ‘right spot’ on the green to hopefully allow the player to make a putt. Fourteen is a tricky uphill par 3 requiring the most accurate of tee shot - missing the green will make par unlikely. The 15th is perhaps the most interesting - anything from a driver to a six-iron - again reaching the green in regulation is essential for par. Sixteen typically plays as one of the hardest holes of all during tournaments and a long iron with careful placement is required to make three. Two par 5s finish the nine - with 18 often the scene of a heroic birdie or even eagle to snatch a victory.

At 461 metres the 18th is not a long par 5. Avoiding the fairway bunkers is paramount off the tee.
The Centre of the fairway is always the place to be on any hole. Over the fairway rise and in the centre on Victoria’s 18th will open up every possibility of being on the green in two. Finish with a regulation two-putt - and you’re home with a birdie. Easier said than done of course, but a good drive followed by a second shot to the right-hand side of the green will give you the chance to finish in fine style.