As the home of the Australian PGA Championship, Palmer Resort, Coolum offers the best ranked resort golf course in the country. 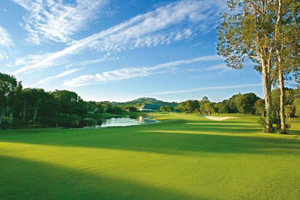 What's more, it is a major drawcard for corporate groups, social clubs and event organisers, taking advantage of the luxury accommodation and meeting facilities of one of Australia's leading integrated resorts.

The course is supported by Australia's leading golf education centre, offering undercover tuition and the very latest technology to help refine swing and technique. The centre offers oneonone coaching sessions with its team of PGA professionals as well as complimentary group clinics each weekday covering everything from putting to psychology.

Palmer Resort Coolum offers a range of golf packages for pairs, couples or groups, combining luxury accommodation with unlimited golf and extras such as breakfast and spa access. 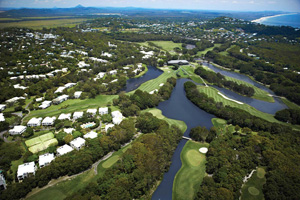 Again designed by Robert Trent Jones Jr, the new holes blend with the natural landscape and create a subtle drama in the length and orientation of the fairways.

Throughout all 18 holes, the course makes the most of the local subtropical environment, weaving around coastal bushland, native forest and landscaped grounds and lakes. It has a true championship layout with generous fairways, plenty of bunkers and lots of water particularly on the back nine.

A classic finishing hole and well worthy of its Index #1, the 18th is hailed as the course's 'hardest hole'.

The ideal line is to play the tee shot towards the fairway bunkers on the right with a touch of draw any tee shot landing left of centre will naturally kick down towards the water running parallel with the entire length of the hole. Careful club selection is required so as not to go too far and end up in the bunkers.

If the sensible option of a 3 wood from the tee is used, you should be in an ideal position in the middle of the fairway in or around the two fairway bunkers leaving you with 180m (from 1st fairway bunker to the green). This is what sets the hole apart from any other - the player has to decide whether to go for it or lay up.

If you go for it, the ball needs to be carried all the way to the green as anything landing short, like with the tee shot, will naturally kick left towards the water. If you decide to lay up, play down the right side and land short of the greenside bunker. This will allow you a chip onto the green. Then, depending on where the flag is, you still need to approach with caution.