Situated on the banks of the Brisbane River, the Royal Queensland Golf Club is the premier golf club in Queensland and one of the finest in the country. The Club boasts a proud reputation for providing outstanding golf and quality service. 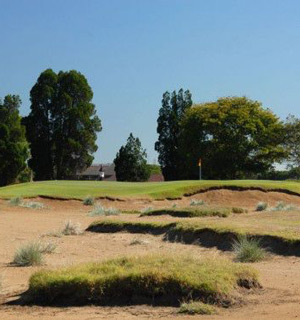 The (Royal) Queensland Golf Club was established in 1920 at Hamilton and was granted its Royal Charter in 1921 by King George V. In 1926 the famous Scots course architect Dr. Alister MacKenzie contributed his renowned design wisdom to a number of holes, as well as the greens and bunkering of the course generally. At a farewell function for MacKenzie, the great man said, ‘Royal Queensland already compares favourably with some of the British Championship courses. It should have a very great future, and will be an excellent test of golf.’

A distinctive feature of Royal Queensland is the striking profile of the Gateway Bridge which soars high over the course and the adjacent Brisbane River. In 2005, the Queensland Government decided to erect a second identical structure to cope with increased traffic flow on the Gateway Arterial. The scope of this huge project meant that the Club would lose seven holes, and it, therefore, had no alternative but to undertake a reconfiguration of the historic layout.

Accordingly, new designs were considered from a number of high-profile Australian and overseas golf course architects before a unanimous Board decision to accept Michael Clayton’s outstanding concept. The result is a unique opportunity to play a strategic links-style course that provides a truly memorable experience for golfers of all abilities.

Royal Queensland has hosted three Australian Open Championships, two Australian PGA Championships and four Australian Amateur Championships, as well as a multitude of other significant professional and amateur events. It has welcomed many world golfing greats, from Walter Hagen and Gene Sarazen in the 1930s to later masters of the game including Arnold Palmer, Gary Player and Peter Thomson. The Club has also been home to many outstanding Australian golfing personalities, including Charlie Earp - Club Professional for 45 years until 2003 - and his onetime trainee, Greg Norman.

At Royal Queensland, the acclaimed golf course, expansive practice facilities, and five-star food and beverage offerings provide the ideal environment to satisfy the joys of the great game of golf.

Michael Clayton describes the new layout and the philosophy of the design as follows:

‘Royal Queensland is a course that was designed to place an emphasis on strategic golf. The width and space afforded the golfers from the tee give them every opportunity to decide for themselves where best to play.

‘There are very few shots on the course where the architecture dictates where the golfer must play. At most of the two and three-shot holes, the test from the tee is of accurate driving to position as opposed to simple straight hitting.

‘The majority of the greens are arranged so the player is presented with a preferred line of play into the flag and those playing from the nonpreferred side are likely to face a quite different shot and one that is more difficult.

‘The most highly rated courses in the world are based on strategy and providing choices for golfers, rather than dictating that there is only one way to play a hole. The Old Course at St Andrew's is still perhaps the best course in the game. Certainly, it is the most interesting and consequently the most fun to play. No shot there is dictated to the player and there are multitudes of options for all players, no matter their handicap, to consider.’

Although only a short Par 3 at 120 metres, the 17th is a little beauty — a challenging hole that has played a significant role in deciding a number of major tournaments.

Players are required to judge their 17th tee shot perfectly to carry the wastelands from the tee to the elevated green. For golfers who manage to harness the wind and find themselves placed on the green, they face two distinct tiers on the green which will provide some fun putting challenges. One of those great Par 3s that can make your knees tremble on the tee, the 17th at Royal Queensland is proof that a hole does not need to belong to be challenging and memorable.