Largely unheralded outside of Melbourne, the Woodlands Golf Club is yet another exceptional example of classic Australian golf course architecture. It is also one of the few private golf clubs that remains on its original site.

Cofounder Mr. G H Rogers, a school teacher with a passion for golf, suggested the site for the course in 1912. A year later, the club was established on leased, open woodlands that were, at the time, used for grazing. The land was part of the estate of Count Fonceca, a French nobleman, known as the ‘Mad Count’ for his eccentric behaviour.

By 1919, the basic design of the course was completed and little has changed since then. The course is in a natural bush setting and was declared a sanctuary for the native game in 1925.

The present Clubhouse was rebuilt after a fire destroyed the old Clubhouse in 1927. In 2010, it was renovated at a cost of over $8 million and is an outstanding example of Australian architecture. The Clubhouse provides panoramic views of the golf course and hosts many members, and golf and business events. 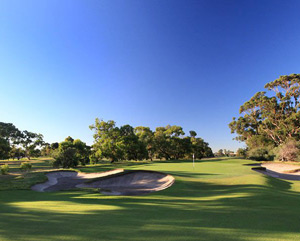 Woodlands is a typical first-class championship course with relatively small greens and tees. Befitting a course of its class, it has hosted a number of professional events and numerous State and National championships. Together with pure couch fairways, firm bent grass greens, brilliant bunkering and striking tree lines, it is a true test of golf.

Much of the course today is as it was designed by an English architect, Mr. J D H Scott. In particular, the traditional bunkering epitomises the highly strategic and characteristic influence of Dr. Alistair MacKenzie. The bunkers, while not directly associated with the famed Scottish designer, clearly exhibit a degree of his influence as they were built by Mick Morcom who, as the Course Superintendant at Royal Melbourne, constructed much of the work at RMGC on instruction from MacKenzie.

Golfers will remember Woodlands because it tests all aspects of their shotmaking ability. The greens are small, hard and generally very fast, the fairways are bordered by indigenous vegetation including magnificent Red Gums, many of which are hundreds of years old.

Players will experience the Par 4, 4th hole, regarded as one of the best short Par 4s in Australia. Position from the tee is paramount to allow any chance of attacking this narrow green. The green is reachable, but any shots left or right of pin high leaves a near impossible up and down. The ideal position from the tee is short right to leave a short pitch into a green protected by steep banking on either side.

Equally impressive, the Par 5, 15th hole was rated by Tom Doak as one of the best Par 5 holes in the world. A monster from the back tees, a par is a great result on this hole which is fraught with danger from tee to green. A fearsome set of cross bunkers stretch across the fairway some 100 metres from the green, after negotiating these an elevated green protected by a deep greenside bunker on the left and steep slope on the right and behind awaits.