Taiwan’s official currency is the New Taiwan Dollar (NTD). USD and CAD are only accepted at duty-free shops, so be sure to exchange cash for local currency upon arrival at the airport or at a local cash exchange location. Major international credit cards such as American Express, Mastercard and Visa are accepted at most hotels, upscale shops, and restaurants.

Mandarin is the official and most widely spoken language in Taiwan. Another common dialect is Hokkien, which is also referred to as Taiwanese. While travelling in tourist areas, you can find many locals that speak English.

With the perfect balance of dry and cool weather, September to November is the best time to visit Taiwan. During these months average temperatures range from 12°C–25°C/60°F–78°F, with lower humidity. During the winter, it’s mild and foggy, but relatively dry with average temperatures between 12ºC–19ºC/55ºF–65ºF) making it still very comfortable for North American travellers. It’s best to avoid travel during typhoon season from June to October when it’s very hot and humid, and there’s lots of heavy rain.

Taiwan is an island surrounded by oceans, making it mostly subtropical; it's warm year-round with mild winters and hot summers. However, on the southern part of the island near Tainan, Kaohsiung, Hualien, and Taitung, the climate is more tropical. Annually, the average temperature hovers around 22°C where the lowest temperature only dips down to 12°C-17°C.  So feel free to leave those winter coats at home, unless you plan on heading into the mountains, where snow is common during the winter.

Travellers that are interested in food, culture, and nature will find a lot to like about Taiwan. They can discover diverse culinary dishes, bask in the insta-worthy landscapes from mountains to coastline, and explore the well-preserved cultural and historic sites and meet the friendly people. 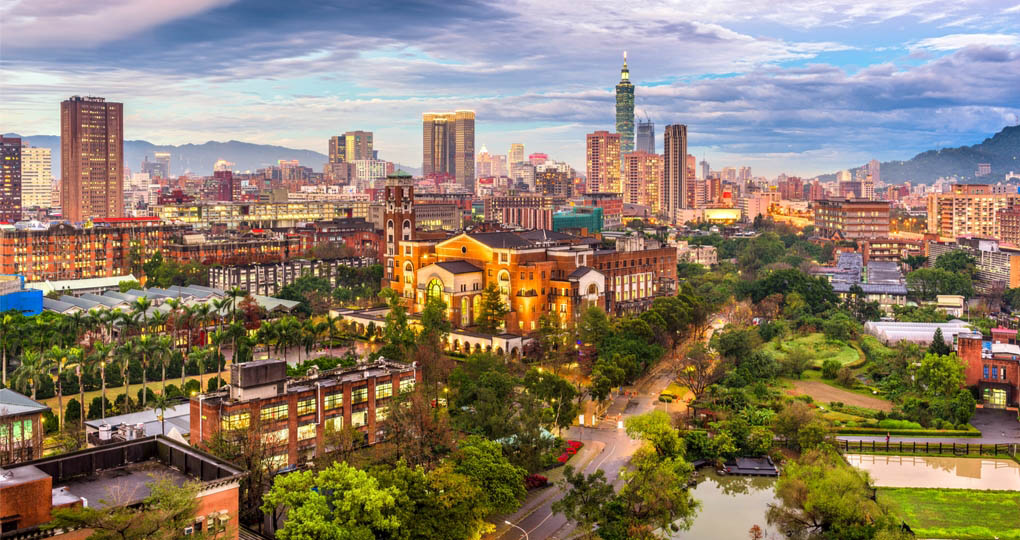 Taiwan Taoyuan International Airport (TPE) is the primary airport on the island located 30 km away from the city. From there you can connect to your next destination, with most flights on the same day as arrival.

Major routes from the United States Taipei is the capital of Taiwan located in the northern part of the country and the nation’s cultural centre. Travellers can discover countless cultural treasures at the National Palace Museum, dine on a wide range of culinary delicacies at the Shilin Night Market, or bask in the architectural and cultural landmarks like Taipei 101, which was the tallest building in the world between 2004 and 2010. Spend the day exploring the city’s natural features while hiking up Elephant Mountain or simply sit back and relax in the hot springs.

Sun Moon Lake is the pearl of Central Taiwan and the largest natural lake in Taiwan. The name comes from its shape, as the eastern part is round like the sun and the western part is shaped like a crescent moon. Enjoy an evening or day boat ride taking in the panoramic view of Sun Moon Lake. It’s also home to the Formosan Aboriginal Culture Village, a unique amusement park devoted to the region’s Indigenous peoples.

Kaohsiung is known as "Taiwan's Maritime Capital” and is home to scenic mountains, ocean views, and many impressive skyscrapers like Tuntex Skytower. Explore the many cultural and historic attractions such as the famous temples of the Dragon and Tiger Pagodas and the Spring and Chimei Museums. Try a vegetarian lunch at Fo Guang Shan Monastery, the largest Buddhist monastery in Taiwan, and participate in a unique cultural experience using the traditional oil paper umbrella art at Hakka Village in Meinong. Foodies should make sure to sample some delicious street food at Liuhe Night Market.

This impressive canyon is located along the nation’s east coast. Taroko Gorge National Park is a 19km-long landmark gorge carved by the Liwu River. The gorge makes for a great day trip for families or hikers who can explore the marble river footpaths of Zhuilu Old Road or Shakadang Trail.

Other Highlights of Taiwan Off the Beaten Path Tainan is the oldest city in Taiwan and famous for its centuries-old temples and fortresses, such as Confucius Temple and Anping Castle. Travellers can walk around Anping’s old streets that surround the Anping Old Fort to discover early Dutch and Chinese settlements, take a stroll through Liuho Night Market to try out local delicacies than those found in Taipei.

Travelling east from Taipei, you’ll find this well-preserved old mountain town known for its narrow alleyways, tea houses, and breathtaking views of the ocean. Jiufen is a former gold mining hub. Learn about the mining history at the Gold Mine Museum or marvel at the historical architecture of the commercial district. As you walk along Suchi Street you’ll be amazed at the unique stores and restaurants built right into the mountainside. It’s the perfect place to visit local eateries and teahouses and shop for handicrafts and other memorable souvenirs.

Kenting National Park is Taiwan’s oldest national park and is located in the southernmost part of Taiwan. Thanks to its unique location surrounded by the mountains and the ocean, it’s a great spot for nature and beach lovers.

Top Activities and Experiences in Taiwan Food culture is very important in Taiwan. Without eating street food (xiaochi) at a night market your trip wouldn’t be complete. Taiwanese food is incredibly delicious with a variety of dishes available at a reasonable price. There are a few famous night markets in each city offering mouth-watering food and shopping opportunities, such as Shilin Night Market and Raohe Street Night Market in Taipei, Liouhe Night Market in Kaohsiung, and Tainan Flowers Night Market in Tainan.

Taiwan is one of the best places for hiking and adventure sports due to its mountain ranges, turquoise waters, and national parks. Jade Mountain and Snow Mountain are the tallest mountains in Taiwan. You can try river trekking for an exciting summer adventure in Yangmingshan Park and the Hualien area on the east coast. You can also enjoy great natural views while cycling in almost every part of the country, from Hualien to Taitung and Sun Moon Lake to the central mountain range.

Depending on when you visit, you may be able to take part in one of Taiwan’s many exciting festivals throughout the year. The most important festivals are Chinese New Year and the Lantern Festival, which both take place in mid-to-late January or early February. Bright lights and colourful lanterns light up the night sky like fireflies and exciting parades and elaborate costumes fill the streets. Other important festivals are the Dragon Boat Festival and the Mid-Autumn Festival.

When visiting Taipei, be sure to stop by this historical landmark. Built in 1976, this famous monument was created in memory of Chiang Kai-shek, the former First President of the Republic of China. Walk around the massive grounds which feature huge white temples covered in blue and red tiles, perfectly manicured gardens, and a large gathering area that’s typically used for large democratic assemblies.

Due to its geographic location, Taiwan is an ideal hot spring location offering people a natural way of rejuvenating their bodies through its therapeutic properties. It has several hot springs throughout the island, including Yangminshan, Beitou, and Wulai. Bubble tea or pearl milk tea was created in Taiwan and has since become popular around the world. It's a tea-based drink that is shaken with ice, milk, and chewy tapioca balls ("pearls"). This fruity-flavoured beverage can be found at many street food stands and cafes throughout the nation.

Beef noodle is considered the national dish of Taiwan; it even has its own festival called the Taipei International Beef Noodle Festival hosted every year. You can find this delicious braised beef soup anywhere in Taiwan. In Taipei, check out Tao-Yuan Street Beef Noodle Shop for some of the best beef noodles in Taiwan.

Taiwanese fried chicken is arguably the most popular street food snack in the country. This twice deep-fried, crumbly coated chicken is typically tossed with salt, pepper, and basil leaves then dusted with spice powder. With so many food stands mixing up their own take on this classic recipe, grab a stick or two when exploring the different night markets.

Pineapple cake is like a shortbread tart filled with pineapple that tastes very buttery and fluffy. Pineapple in the Taiwanese dialect is “ong lai,” which means  “luck is coming.” Thus, pineapple cake became a symbol of wealth, good luck, and prosperity in Taiwan. It’s the country’s prized pastry and makes a great souvenir to bring back home to share with your family and friends.

Gua Bao or Taiwanese Hamburger is a local specialty consisting of a steamed bun filled with braised pork belly and pickled cabbage. You’ll often see this snack come with nuts and tons of coriander mixed in, so be sure to request nut-free if you have food allergies. Environmentally-friendly transport options like cycling will help reduce your carbon footprint when travelling through Taiwan. Purchase locally produced crafts from artisans to support local economies, but be cautious not to buy products made from endangered species, hardwood, or ancient artifacts. Reuse hotel linens to help reduce water consumption.

Extend your trip to many other destinations in Asia with convenient air transportation from Taipei to China, Singapore, the Philippines, Malaysia, Thailand, Cambodia, Laos, Vietnam, Indonesia, and Japan.

Most Popular Itineraries for Taiwan

Taiwan Showcase is a 5-day itinerary offering a condensed package that’s ideal for nature lovers. Explore natural scenery from Central Taiwan to the South, including the charming Sun Moon Lake, the port city of Kaohsiung with its scenic mountain and ocean view, tropical Kenting National Park, and the impressive Taroko Gorge. If you have a week to spend in this memorable destination, Enchanting Taiwan gives you 8 days to fully enjoy the natural beauty and history of Taiwan. Explore the amazing lakes and rivers, tropical national parks, temples, and monasteries of this island nation.

FIRST-CLASS | ESCORTED COACH TOUR: Discover this diverse country with time spent in the capital city of Taipei, touring through the scenic East Coast area including Taitung, visiting iconic Taroko Gorge and soaking in hot springs in Chiaohsi (Yilan). Taiwan will surprise even the most traveled globetoretter with its natural beauty, culture, history and fabulous cuisine.