The Euro is the accepted form of currency in Spain. Many locations accept Visa and Mastercard, and many larger establishments will accept Amex. Discover Card is not accepted throughout most of the country. Cash is the most recommended form of payment, especially when visiting small, rural towns.

The official language of Spain is Spanish. However, many people speak English, especially in popular tourist areas in the major cities.

No matter the time of year, there is always something to see or do in Spain, but summer and winter are the most popular times to visit. In the summer, travellers can enjoy many of the festivals that are held across the country, hike breathtaking trails, or get lost in the culture and history of the country. In the winter, travellers can escape the cold with a trip to the south coast where they can relax and stay warm while experiencing Spanish culture and tradition first-hand.

The climate in Spain is very standard for Mediterranean regions, with hot dry summers and cool winters. Of course, the weather can vary across the country, with the south of Spain and the islands being popular resort destinations for those looking to escape the colder months.

With different regions offering different climates, terrain, and history, Spain is a great country for all travellers. History buffs can wander through hundreds of different landmarks to learn about Spain's unique and rich history. Adventurers can hike, bike, and kayak their way through Spain’s beautiful scenery. Spain is also paradise for foodies, with one of the world’s great culinary cultures. 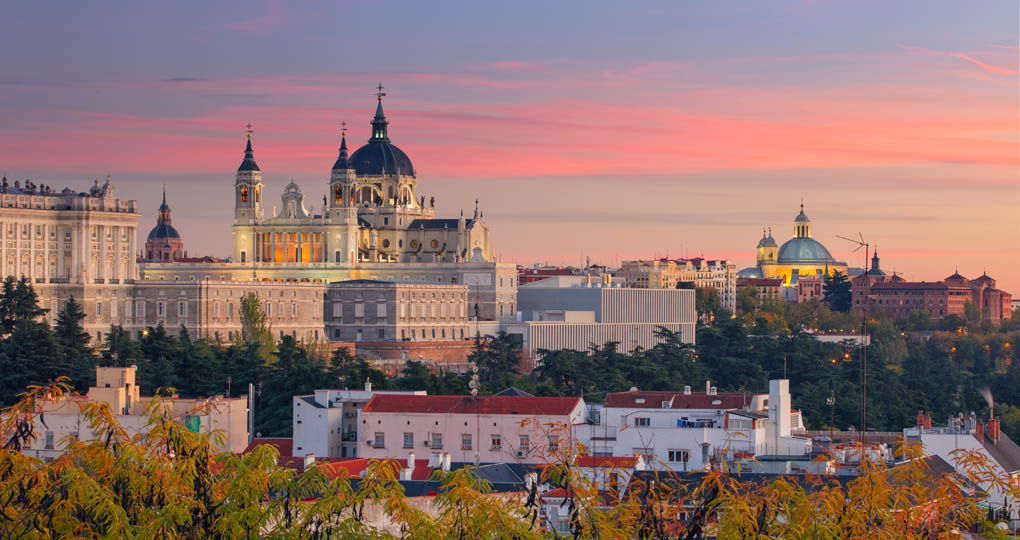 There are direct flights to Barcelona and Madrid daily from major US cities like New York, Chicago, Los Angeles, and Atlanta. Many routes also connect via cities such as London, Dublin, and Istanbul, creating a perfect opportunity to add a stopover en route.

Toronto and Vancouver both have direct flights to and from Barcelona and Madrid. There are also connecting flights from major European cities like London, Zurich, Amsterdam, and Paris, which are great stopover options. 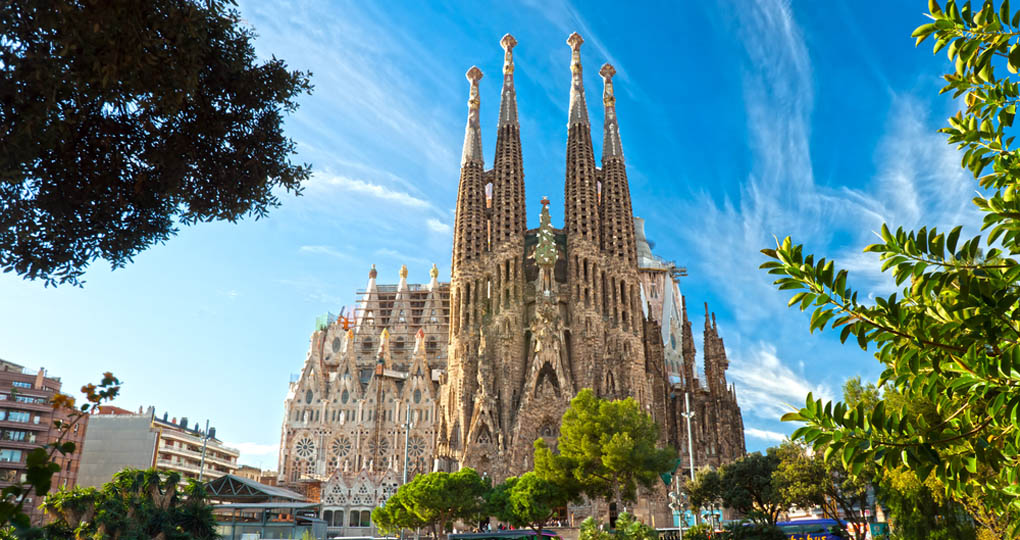 Barcelona is Spain’s largest tourism hub and is located right on the coast of the shimmering Mediterranean. The city is Spain’s artistic centrepiece, with vibrant works and buildings by famous Spanish artists like Antoni Gaudi and Pablo Picasso. The city has a vibrant culture, delicious food, and incredible views.

The capital of Spain and its largest city, Madrid serves as a gateway to both the north and south. It also has some of the most beautiful architecture in the country with Palacio Real and Plaza Mayor, and famous art at the Prado Museum. The famous GranVia is known as the “Broadway of Spain” and offers a first-hand experience of Spanish culture.

Seville is the capital city of the Andalusia region of Spain, and is known for its culture and monuments. Spend your days exploring Royal Alcazar or the Plaza de Espana, and spend your evenings enjoying a traditional flamenco performance, which the city is famous for.

This port city in the Costa del Sol is a very popular resort destination. The city is known for its beautiful yellow sand beaches and is an excellent destination for travellers looking to combine history, culture, and a relaxing beach stay.

Other Highlights of Spain Off the Beaten Path 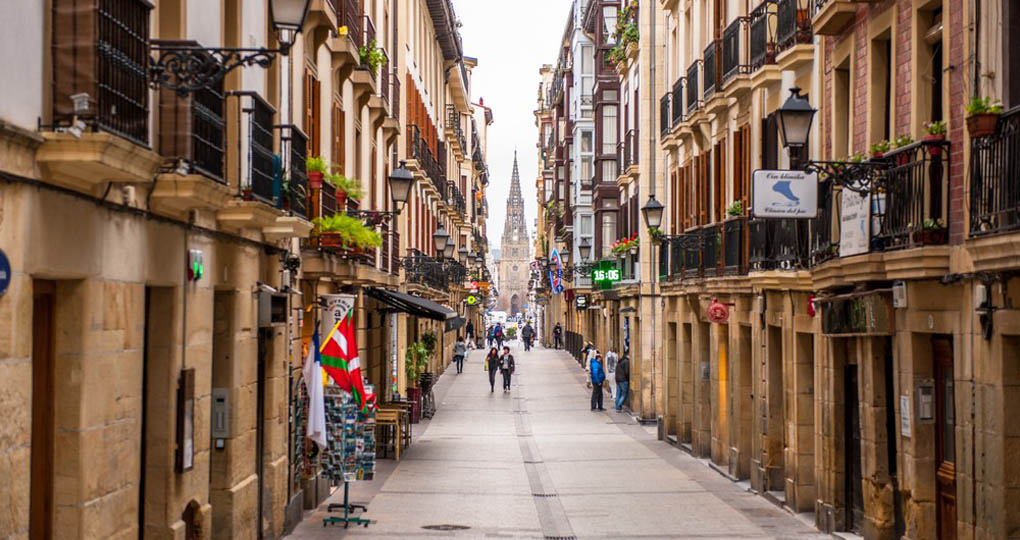 Palma de Mallorca is the capital city of the Spanish island of Mallorca, located in the Mediterranean. It’s a stunning city full of vibrant people, incredible scenery, and remarkable architecture. Wander the streets to explore the many shops and cafes, or visit the historic Santa Maria Gothic Cathedral to get a taste for its cultural scene.

San Sebastian is located in the north of Spain and is one of the most popular cities in Basque country. It has beautiful beaches and lush hillsides, making it a popular stopover for nature lovers. It’s also known for its gastronomy, with a bayfront promenade hosting many world-renowned restaurants offering traditional food combining the Basque and Spanish cultures.

Valencia is the third largest city in Spain and is located on the Mediterranea Sea. It is known as the City of Arts and Science and is home to a world famous planetarium, an oceanarium, and a museum with interactive exhibits. No visit to Valencia is complete without trying paella, which originated in the city.

This city is located in the northwest of Spain and known as an important site along the Camino de Santiago pilgrimage route. Its historical landmarks such as the Cathedral de Santiago de Compostela, the Monastery of San Martino Pinario, and the Praza do Obradoiro are some of the most ornate buildings in Spain.

Top Activities and Experiences in Spain 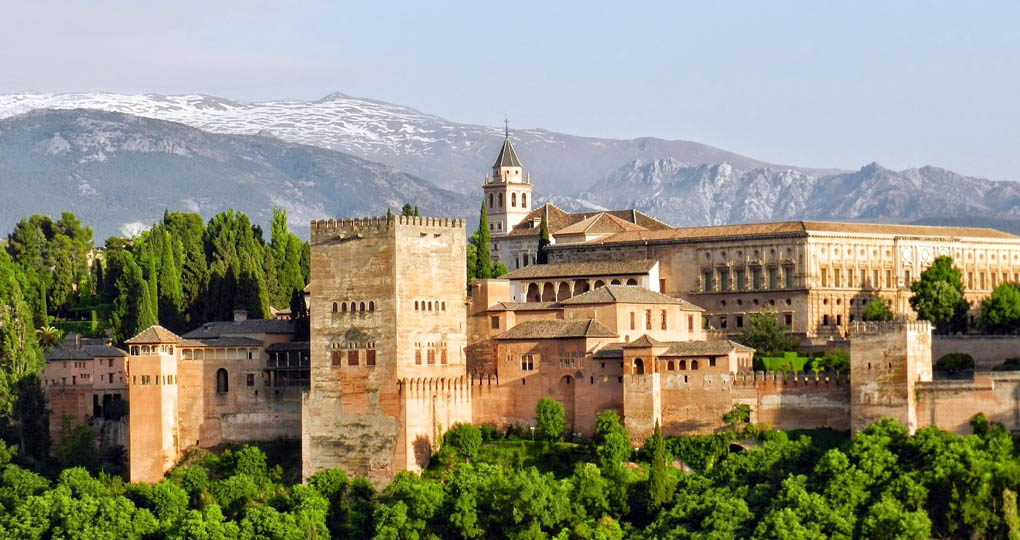 Designed by the famous architect Antoni Gaudi, this fabulous church is considered Gaudi’s greatest creation, despite being unfinished to this day. Located in the Eixample district of Barcelona, this basilica showcases elaborate designs, tableaus, and sculptures and is a true masterpiece inside and out.

See the Best of Gaudi

While La Sagrada Familia is known as Gaudi’s most famous work of art, it is not his only masterpiece. Explore the most iconic Gaudi sights, such as the Park Guell, Casa Batllo, and La Pedrera, and learn about Gaudi and the impact he had on both art and Spanish culture.

One of the most important sites in Spain, the Alhambra was originally constructed in 889AD as a small fortress before growing into the palace it is today. Spend a day in Granada and explore this beautiful UNESCO World Heritage Site that is known for being one of the most remarkable mixes of Islamic and 16th-century Christian architecture in the world. Its garden, Generalife, is also remarkably beautiful.

This musical style combines a wide variety of musical traditions and is a fixture of Spanish culture. Spend an evening listening to a musical performance while watching traditional Flamenco dancers move across the floor. To complete the experience, many shows offer traditional tapas menus and local wines to enjoy during the performance. 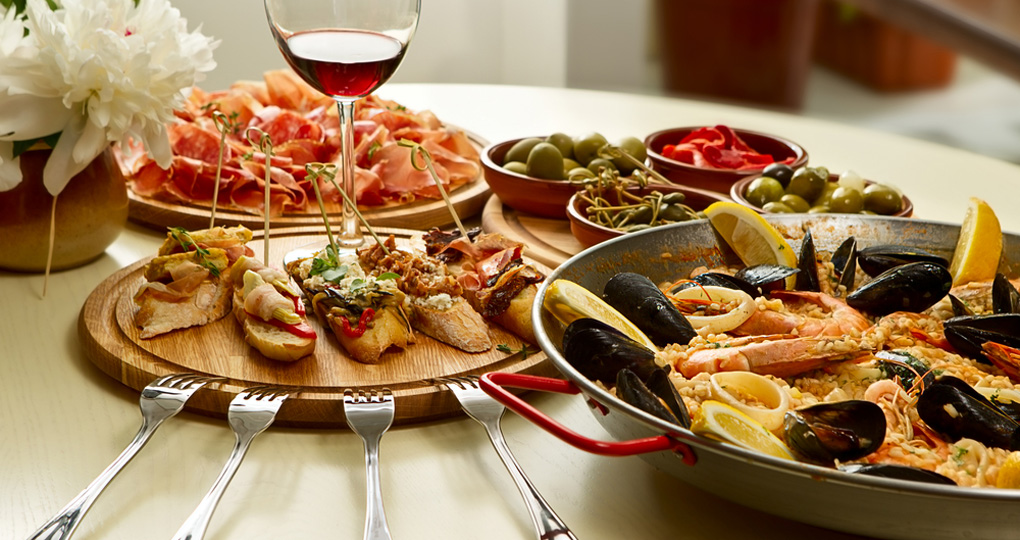 While paella originated in Valencia, it has become an integral part of Spanish culture across the country. This rice dish is cooked in a large frying pan, with the traditional recipe including a variety of beans along with rabbit, duck, chicken, and snails. However, seafood is also a popular alternative to meat. Paella is served across the country in a variety of ways that are unique and special to each different region.

Gazpacho is a traditional Spanish soup. However, unlike most soup across this world, Gazpacho is served cold. Traditionally, this dish is a blended mix of raw vegetables and is very popular amongst locals during the hot summer months, as it’s very refreshing.

Tapas can be found all across the country. These bite sized snacks are usually served as appetizers in numerous cafes and restaurants. Tapas can come in all forms, from local meats and cheeses, to seafood and other regional delicacies.

Also known as a Spanish omelette or Spanish tortilla, this dish is traditionally made out of egg and potato, and served at room temperature. It can be enjoyed for any meal, and is typically served as tapas. 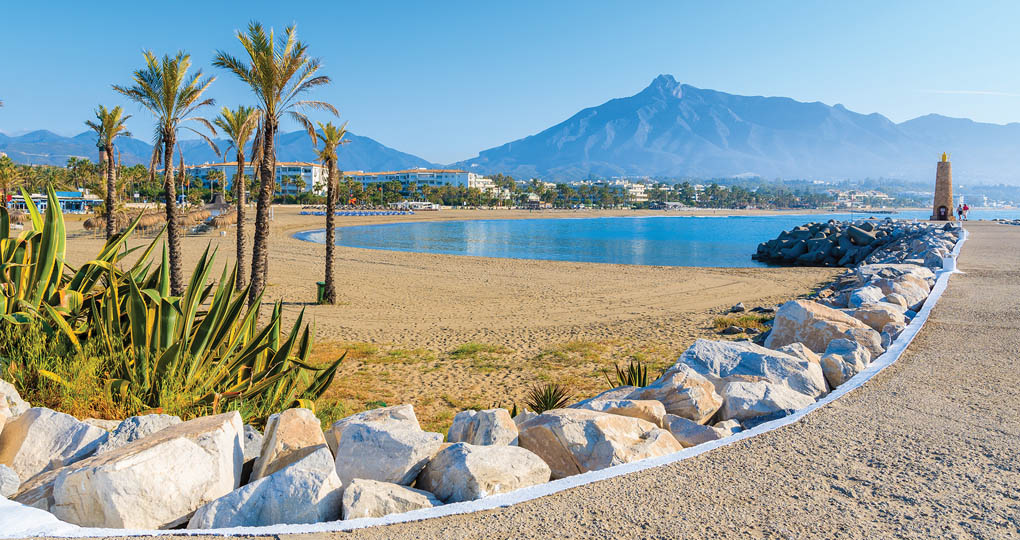 With a high number of UNESCO World Heritage Sites, and local initiatives to shine a light on local Spanish products, Spain is a country focused on sustainable travel. Many main cities are easy to navigate by foot or bike, and Spain has an excellent railway system making it easy and efficient to travel between cities.

Spain shares a border with France and Portugal, giving you two very easy options to continue your European adventure. Due to Spain’s central location, it does make for short flights or train rides to much of Europe. For those looking for something a little different, head to Costa Del Sol and take a quick ferry south to magical Morocco.

Most Popular Itineraries for Spain

Classic Discover Spain serves as a perfect introduction to the nation and takes travellers on an independent journey through three of its most popular cities: Madrid, Seville, and Barcelona. Spanish Adventure Self Drive takes travellers along the road from Barcelona to the historic town of Huesca and Jaca. It then connects into France to visit Lourdes and the small nation of Andorra before returning to Barcelona. Snowbird Long Stay: Costa Del Sol is a great option for travellers who want to escape the winter for a few weeks. Travellers stay in a one-bedroom apartment in Benalmadena in the Costa Del So, enjoying the sunny beaches each and every day.

FIRST-CLASS | TAILOR-MADE: Explore the quintessential highlights of Spain in Madrid, Seville, and Barcelona. Discover historical landmarks and artistic masterpieces in Madrid and Barcelona, explore the old cities of Toledo and Ronda, and enjoy delicious tapas and beautiful Flamenco music.

MODERATE | SELF-DRIVE: Get off the beaten path and discover three countries in 9 days! Starting in Barcelona, enjoy the city at your own pace. Then, drive to Huesca and Jaco, charming medieval cities located close to the French border. In Lourdes, France, visit a famous pilgrimage site before finally heading out to Andorra, located high in the Pyrenees mountains.

FIRST-CLASS | LONG-STAY: Enjoy a Mediterranean climate with hot summers and warm winters and a variety of year-round activities in Benalmadena in Costa del Sol. Stay in first class accommodations, a One-Bedroom Apartments. Easy access to golf courses and driving ranges, options for cuisine and golden sandy beaches, Benalmadena has something for everyone all year-round.