The Perfect First-Timer’s Week in Ireland

For a relatively small country, Ireland fires the imagination like few others. For many North Americans, Ireland is in their blood. The history of North American immigration is in many ways the history of Irish emigration, and countless stories from Ellis Island, Newfoundland, and other points of arrival find their beginnings in Ireland. In some parts of the United States and Canada, up to a quarter of the population can trace Irish ancestry.

Split between Dublin and one of Ireland's signature scenic routes such as the Dingle Peninsula or the Ring of Kerry, one week is usually enough for a good grasp of Ireland 101, and probably gives you time for a night in Galway en route. With longer than a week, add Northern Ireland to your plans. The Antrim Coast is nature’s star attraction here, and with a car or well-planned day trips, you can reach pretty much everywhere from either Belfast or Derry. If pushed for time, you can swap Galway or the southwest for Northern Ireland.

How to Spend 3 Days in Dublin

Besides being its capital, Dublin is Ireland’s cultural heart, and at its centre is Trinity College. The college’s most prized possession is the Book of Kells, housed inside the exquisite Old Library. The ultimate symbol of Irish culture and religion, this Ninth Century manuscript documenting the Four Gospels of Christ will return to public view in March 2020 after restoration work is complete. Nearby is the National Museum of Ireland, where you can soak up the broader Irish story. If time allows, finish your day with a lap of the National Gallery of Ireland.

Start your second Dublin morning amid the ghosts of British rule with a tour of Dublin Castle, making sure not to miss the Chester Beatty museum and library. Then take in the spectacular Gothic architecture of Christ Church Cathedral, paying your respects to local icons ‘Tom and Jerry’ in its magnificent crypt. A logical next stop is Ireland’s most important church, St Patrick’s Cathedral, where a free guided tour reveals the highlights while putting the role of this incredible building into perspective. Cap off the day at a building some would say is just as integral to Irish identity, Guinness Storehouse.

With a third day in Dublin, spend a morning exploring the eerie and sometimes grisly history of the Kilmainham Gaol. The Irish Museum of Modern Art is right nearby, or if weather is on your side, a hop-on, hop-off bus ticket will help you explore expansive Phoenix Park. On a rainy afternoon, head to the Hugh Lane Gallery instead, leaving yourself time to pop into the Dublin Writers Museum. If you trace family roots to Ireland, you may want to make time for EPIC: The Irish Emigration Museum for stories of the lives Irish expats have forged in foreign lands.

MODERATE | TAILOR-MADE: Discover all that Dublin has to offer on this trip that’s perfect for first-timers. Spend a day seeing Dublin’s most famous sights, from Trinity College to the famous Guinness Factory. The next day, head on a day trip to the stunning Cliffs of Moher, one of Ireland’s greatest natural wonders.

Exploring the Ring of Kerry and the Dingle Peninsula

The Dingle Peninsula embodies Ireland’s west coast at its finest and is responsible for many visitors’ most romantic notions of this green island. Driving the 30 mile/50km Slea Head Loop from Dingle town gives you an overview, though it’s best done with a guide as there is an astonishing amount of history to discover on this relatively small stretch of land, which some describe as an open-air museum. Try to visit the Blasket Islands. The residents of Great Blasket Island were forced to abandon their home in 1953, leaving it to the marine life that remains prolific on the island to this day.

The Ring of Kerry is 112 miles/180km of gorgeous green scenery that also takes in some of Ireland’s most beautiful towns and villages including Killarney. You’ll absolutely want to see the Skelling Rocks, Cahergal Stone Fort, and the town of Kenmare among other popular highlights. But if things do get a bit crowded, devote some time to exploring the less-touristy Ross Castle or the trails of Killarney National Park. 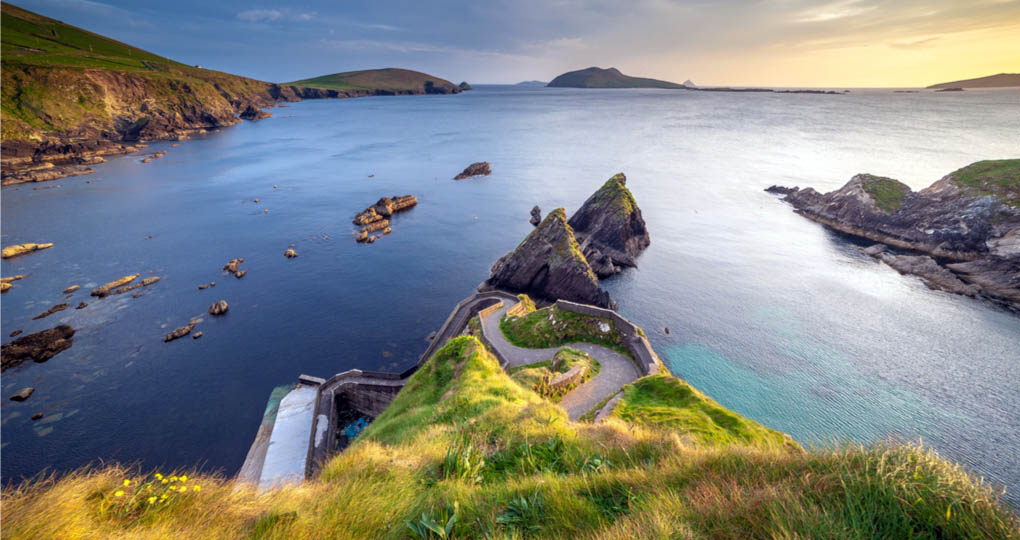 A Good Time in Galway (and surrounds)

Galway serves as gateway to the Aran Islands, the Cliffs of Moher, and The Burren. All are highlights of Ireland’s west coast, but if you plan to see them all, give Galway at least three nights. The Aran Islands are an all-day trip, but they’re also arguably the most essential stop in the region. This is where the wild beauty of Irish grit against the choppy Atlantic is on full display. Explore Iron Age forts, early Christian ruins, and villages that thrive today like Kilronan. The spectacular Cliffs of Moher and The Burren National Park can be seen on the same day.

Galway itself isn’t so much about tourist attractions, though it has its share. Ireland’s Bohemian harbour city is best taken one atmospheric street, artwork, story, show, or yes, pub at a time.  As one of the friendliest cities in Ireland (no small feat), Galway makes it easy to feel close to its creative heart.  If you are keen on capturing the city at its most photogenic, be sure to stop in at the Galway Cathedral, and the Spanish Arch, part of the old city walls.

FIRST-CLASS | SMALL GROUP: This exhilarating tour of Ireland is the perfect addition to a trip around the British Isles, or an ideal extension to a Dublin city break, visiting much of the countryside, including Galway - the 2020 European Capital of Culture - Connemara and Burren before returning to the capital.

The Perfect Weekend in Belfast

Northern Ireland makes a practical and easy addition to an Ireland vacation, probably beginning in Belfast. Part of understanding Ireland – and Northern Ireland especially – is understanding The Troubles that plagued the country’s 20th century. A  Black Cab Tour puts that unsettling history into context in Belfast, but it’s not the only story you’ll find in this complex city. The Titanic Museum stands where the ill-fated ship was built, and no place on earth explains the ship’s story quite so well.

Devote your second full day in Northern Ireland to a day trip. The Antrim Coast is home to the Giant’s Causeway and the town of Portrush. Northern Ireland was also one of the main production locations for the hit series Game of Thrones, so fans may way to plan their adventures around locations such as Shane’s Castle. Brave day trippers can also step out onto Carrick-a-Rede Rope Bridge for magnificent coastal views. 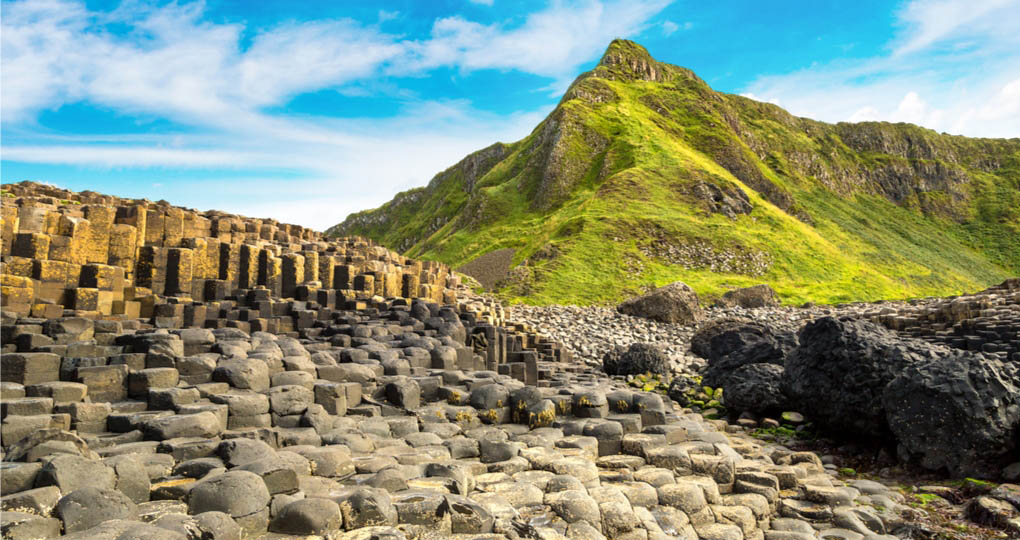 Should I Rent a Car in Ireland?

Ireland is one of the most self-drive friendly countries in Europe, so for those wanting to maximise their freedom to explore, renting a car is an easy and practical option. Many small tour and seat-in-coach trips however also do a good job of covering Ireland’s highlights, often with the context and commentary of an expert guide. The itineraries also often allow free time at many points of interest. It really depends how much you want to customise your itinerary. In the high season of summer, popular sightseeing routes can seem a bit congested, though having a car also allows you to visit at off-peak times to beat the crowds.

MODERATE | SELF-DRIVE: On this eight day adventure, discover Ireland at your own pace by way of a leisurely self-drive program that will take you through the beautiful and rugged west coast of the country, including Galway, Connemara, Killarney, the Ring of Kerry and the Dingle Peninsula. With plenty of time in Dublin, it is an excellent way to acquaint yourself with the Emerald Isle.

What is the Best Time of Year to Go to Ireland?

Irish winters are relatively mild, averaging about 5C/41F, but there’s a catch. They’re often damp and windy, and you’re lucky to get more than an hour or two of sunshine per day. Many attractions in the countryside and in small towns also close through January and February, if not earlier, opening again in time for St Patrick’s Day. This won’t hamper your Dublin or Belfast city breaks however, so don’t hesitate to spend a few winter days in these capitals, enjoying the lighter crowds and cosy pubs of the darker months. Imagine getting into Temple Bar without having to elbow your way through!

July and August see good weather throughout the country, but brace for crowds, queues, and peak prices, especially in the Dingle Peninsula and Ring of Kerry regions. For this reason, spring and autumn are usually considered the sweet spots for Ireland travel.

MODERATE | ESCORTED COACH TOUR: Experience the charms and attractions of this friendly country taking in all the highlights including visits to both Dublin and Belfast. Marvel at the spectacular beauty of the West and North Atlantic coastal scenery plus have lake cruises, pony rides, walking tours and much more!

A Flavour of Ireland: Dublin, Galway & the Cliffs of Moher

MODERATE | ESCORTED COACH TOUR: Discover essential delights of the Emerald Isle – from rugged cliffs and wild scenery to historic castles and green swards – on this insightful, five-day escorted introduction to the charms of Ireland.

A Glimpse of the North Self-Drive: Dublin & Belfast

MODERATE | SELF-DRIVE: Starting and finishing in Dublin, on this self drive tour of the north of the Emerald Isle, you will have time to discover, at your leisure, historic sites, battlefields, Belfast itself, the Giant’s Causeway and above all, the beauty of the Irish countryside.