The official currency is the South Korean won. Credit cards including Visa, Mastercard, and American Express are widely accepted at high-end restaurants and hotels. Some places will accept US dollars, but ATM machines are extremely common and can be found throughout the country. Cash is preferable.

Korean is the official language of South Korea. You’ll find that many people speak English, especially in Seoul and other main tourist areas. Most of the population under 40 have learned English in school, making it easier to interact with international tourists.

Although the start of spring signifies the beginning of blossom season and is the most popular time to visit, South Korea actually has two great visiting periods: spring from March to May and autumn from September to November. During these two seasons, the weather is milder, sunny and dry with temperature averaging between lows around 10°C/50°F to highs around 25°C/77°F. The summer months are considered monsoon season and the air becomes very muggy and wet. Winter between January and February is bitterly cold and unpleasant for most travellers.

South Korea has four distinct seasons with winters that are long and dry and summers that are short but hot and humid. Spring and Summer offer some of the best weather, with spring also coming alive with pink cherry blossoms. Autumn is as appealing as spring, with mild temperatures and little rainfall.

South Korea has a lot to offer nature and history lovers. It has a long, fascinating history and is home to 14 UNESCO World Heritage Sites including Changdeokgung Palace, Bulguksa Temple, and the Royal Tombs of the Joseon Dynasty. Escape the city to Jeju Island for amazing waterfalls and beaches or explore the historical relics in Gyeongju and Busan. 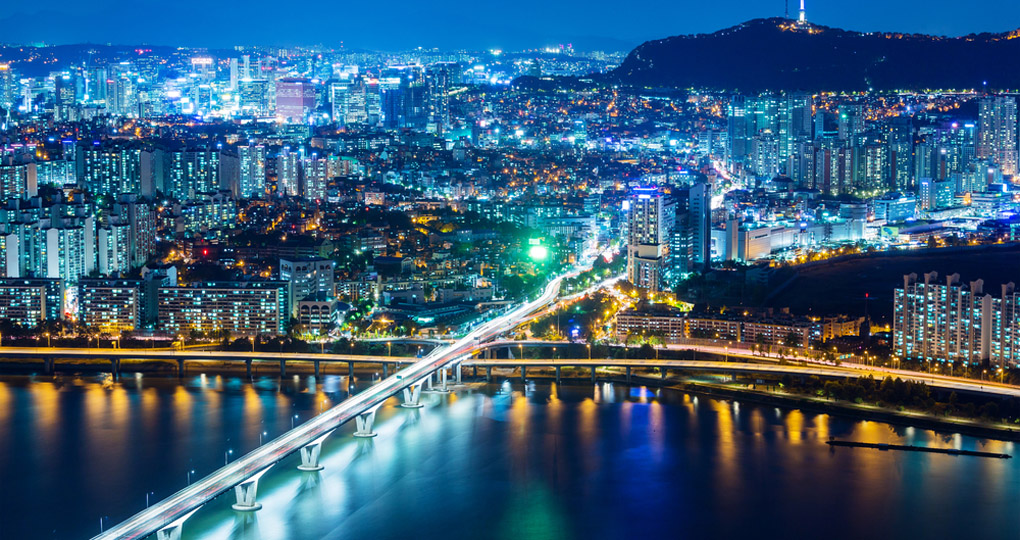 South Korea has seven international airports, but most international flights arrive into Incheon International Airport, which is located 48km/30mi west of the city and about an hour from Seoul. The airport is known as one of the top three airports in the world and has spacious terminals, dining and shopping, modern facilities, and public transportation into the city.

There are direct flights from major U.S. cities like New York and Los Angeles to Seoul on several carriers.

There are nonstop flights to Seoul from both Toronto and Vancouver on several airlines. 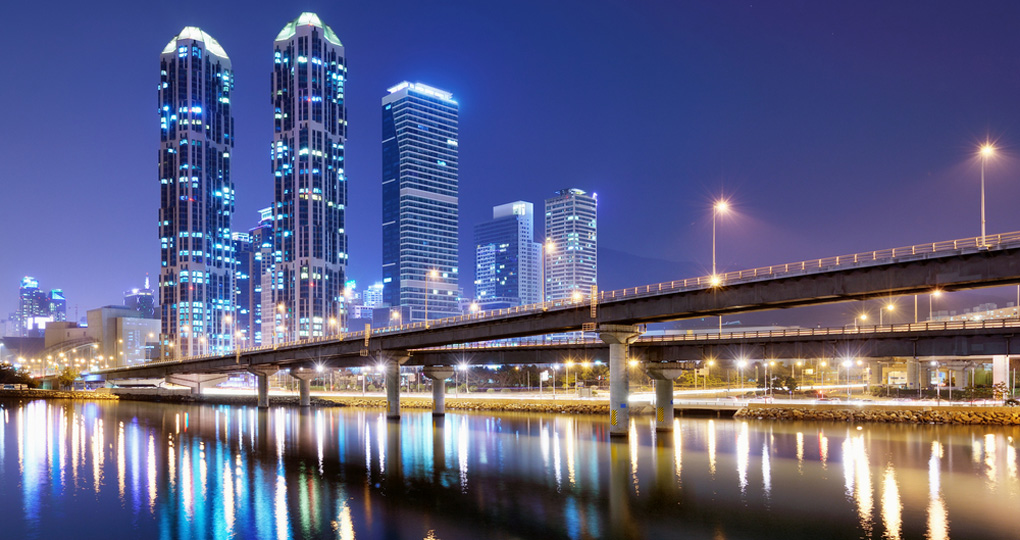 The capital of South Korea offers the perfect fusion of ancient and new-age architecture, from modern skyscrapers to cultural and artistic attractions to Buddhist temples and palaces like Gyeongbukgung and Changdeokgung. Travellers can get lost in the eclectic shopping plaza in Myeong-dong and Dongdaemun Design Plaza with its rooftop park and futuristic architecture. It’s a world-class city with a lot to offer.

Known as an open-air museum, this ancient capital has the most temples, palaces, castles, and pagodas in the country. The city is the former capital of the Silla Kingdom, which ruled Korea from the 7th to 9th centuries. Trek into Gyeongju National Park for some great hiking trails leading up the mountain or take a short ride from Bulguksa Temple to Seokguram Grotto, a hidden Buddhist treasure.

A large port city that’s known for hot springs, mountains, laid back beaches, and ancient temples. Busan offers a slower alternative to bustling Seoul. Visit Beomeosa Temple, a Buddhist shrine and one of Korea’s greatest temples. Explore the colourful alleyways of Gamcheon Cultural Village, a former refugee town during the Korean War. Spend the day relaxing on Haeundae Beach, considered one of South Korea’s most beautiful beaches and a great spot to catch breathtaking sunsets.

Other Highlights of South Korea Off the Beaten Path 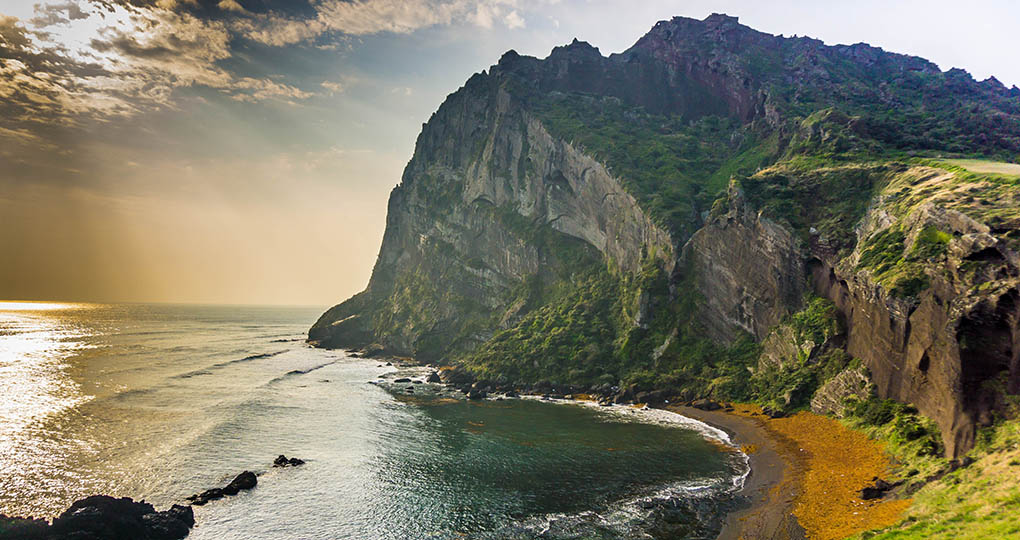 This island is known for its natural wonders, like South Korea's highest mountain, Hallasan Mountain. The island’s volcanic landscape has cave-like lava tubes, hiking trails, and a crater lake formed from a dormant volcano. The island offers natural wonders in addition to white-sand beaches, cultural attractions like Gwaneumsa Temple, and amazing local seafood.

Located 48km/30mi north of Seoul is a strip of land that separates South Korea from North Korea. Technically, both countries are still in a state of war and the DMZ serves as a buffer zone to separate their borders. Diplomatic talks between the countries are held along the DMZ, which has also become one of South Korea’s most famous tourist spots because it allows travellers to see into elusive North Korea. 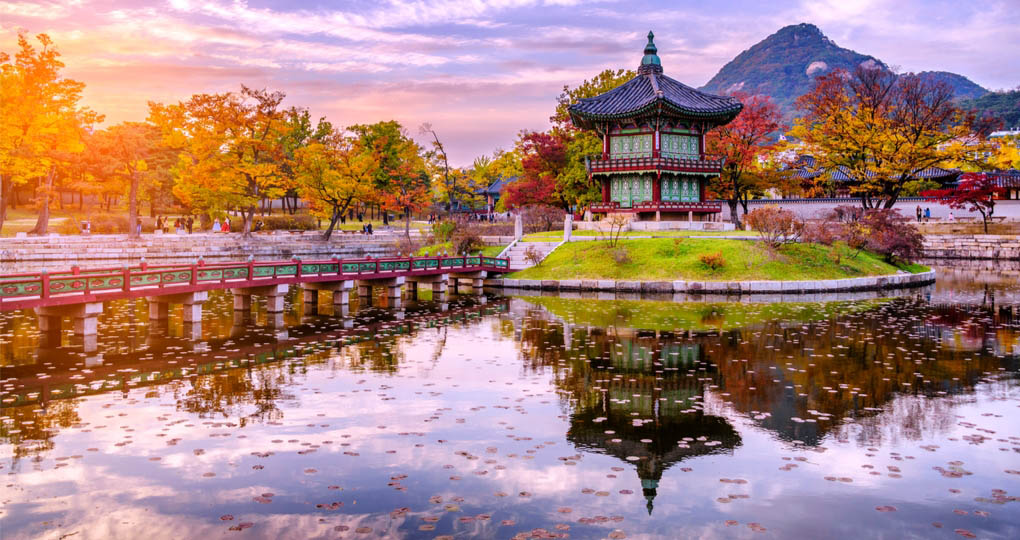 Korea is a great place to explore historic palaces and villages. In Northern Seoul, you can take a trip into the past at Gyeongbokgung Palace, which was the seat of the Joseon dynasty. It’s regarded as being the most beautiful and grandest of Korea’s five palaces. Although it was destroyed during the Japanese invasion of 1592, it has since been rebuilt. Afterwards, explore the alleyways of nearby Bukchon Hanok Village, which is home to hundreds of hanoks or traditional Korean houses.

Stay in a Temple

You can learn about Korean Buddhism with an overnight temple stay near Seoul. It lets you experience Buddhist traditions, lifestyles, and rituals first-hand. It also lets you enjoy delicious Buddhist vegetarian temple food, which has become increasingly popular as a healthy form of eating. You can easily add a 1-night stay onto most trips to Korea.

Try on a Hanbok

A hanbok is a traditional Korean dress worn for festivals and formal events. When you visit South Korea, you can rent your own hanbok to wear for a memorable occasion and some fun photos as you explore historical sites.

Watch the Women Divers of Jeju

Known as Haenyeo, the women divers of Jeju Island have been diving to collect seafood and seaweed for centuries. They’re even recognized by UNESCO. You can learn about the history of the women divers at the Haenyeo Museum on Jeju Island. If you’re especially lucky, you may even see them in action off the coast as they dive to the ocean floor to collect shellfish and other food. 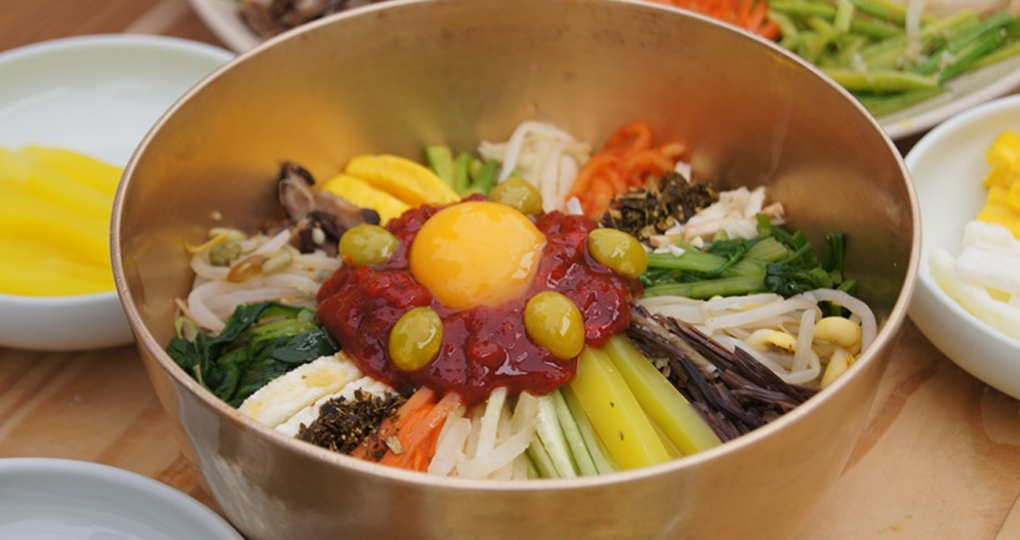 Korean barbeque has quickly become one of the most popular barbeque styles in the world. Traditionally, meats such as pork belly, fresh seafood, or marinated beef such as bulgogi are grilled on charcoal grills along with onions and garlic. The slices of meat are then served with spicy, savoury ssamjang paste and wrapped in lettuce. Today, Korean barbeque restaurants provide each table with their own tabletop gas barbeque to cook at their own pace.

Kimchi is the most essential dish in South Korea. It’s a side dish of fermented cabbage that’s served with every meal—breakfast, lunch, and dinner. The spicy, fermented flavour is quintessentially Korean and the health properties are lauded across the land. It’s not a Korean meal if kimchi isn’t served.

This dish is a bowl of mixed ingredients served over rice and often presented in a hard-rock bowl, which slowly crisps the meal as you eat. While the ingredients used vary from region to region, bibimbap usually involves mushrooms, cuts of beef, namul or spinach, vegetables such as carrots and onions, and is topped with gochujang (Korean chili sauce) and a fried egg.

This stewy soup is a winter favourite across Korea and extremely popular in restaurants in Seoul. It consists of a spicy, soup made with pork back -bone and cooked vegetables such as potatoes, radishes, and green onions. The pork back-bone provides a fatty flavour in the broth, while the other ingredients provide lots of nutrients. Few dishes are better at warming you up on a cold day.

This cold noodle dish is a summer favourite. It’s typically made with long buckwheat noodles in a beer or chicken broth and served with a spicy dressing. Boiled eggs and sliced cucumbers are often added as garnish. 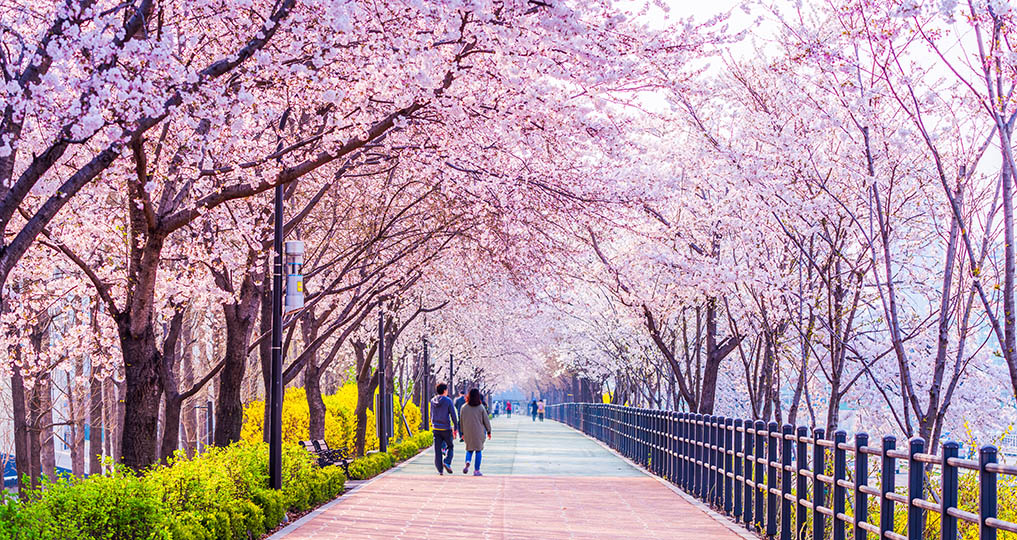 South Korea has made recent efforts toward green living by recycling and having buses with reduced emissions for public transportation. Take a refillable water bottle with you as you travel and use your own metal straws. In Seoul and other cities, the government has provided a bike rental program to get around town. The subway is also highly-efficient and a sustainable way to get around.

South Korea has many nonstop flights to many destinations across the world. Japan and Taiwan are easy connections, as are nations in Southeast Asia such as Thailand and Vietnam. You could also add on a trip south to destinations such as Australia and New Zealand for a longer holiday.

Most Popular Itineraries for South Korea

The 9-day Korea Highlights is perfect for a first trip through Korea, introducing travellers to Seoul, Gyeongju, Busan, and Jeju Island. Essential Korea focuses more on the country’s history with stays in Seoul, Gyeongju, and Busan. Jeju Island Stopover adds on three days on the beautiful island for a natural addition to any mainland journey.

DELUXE | PRIVATE-GUIDED: With stays in the capital, Seoul, historic Gyeongju and its archaeological sites, the port of Busan and idyllic island of Jeju, this itinerary will give you an excellent insight into Korea.

FIRST-CLASS | PRIVATE-GUIDED: Jeju is known for its stunning natural scenery, fine beaches, waterfalls, cliffs, excellent seafood and mild weather. A stay here will be varied and rewarding with much to see and do.