Austria accepts the Euro as its form of currency, with Visa, Amex, and Diners Club being the most commonly accepted credit cards. If an establishment has a “Eurocard” or an “Access” sign, this means they also accept Mastercard.

The main language spoken in Austria is German, although there are many other languages spoken throughout the country, including Croatian, Hungarian, Slovenian, and Turkish, due to foreign workers and the influx of people across European Union borders. English is also widely spoken and understood across the country.

For those who like nature and the outdoors, spend the summers hiking the Alps and their magnificent valleys, and in the winter ski some of the most famous slopes in the world. For those who are into culture, the summers offer you an opportunity to see some of the most famous landmarks, and in the winter watch as cities come alive with an abundance of Christmas markets. During the spring and autumn, you can expect a quieter, more relaxed atmosphere with a temperate climate and fewer visitors.

Depending on which region of Austria you are staying in, you are looking at either a temperate or an alpine climate. Across the country, summertime usually provides hot temperatures in the day time with cool nights. Winters are usually cold, and frequently drop below freezing, making Austria a popular destination for skiing and snowboarding—even in the summer in the Alps.

Fans of The Sound of Music can visit the filming locations for some of the most iconic scenes, or those with a passion for art can follow in the footsteps of some of the world’s most influential musicians and composers, and take in live music and dance performances. Of course, Austria is famous for its skiing and hiking and is perfect for anyone looking to get outdoors into nature and experience breathtaking views. 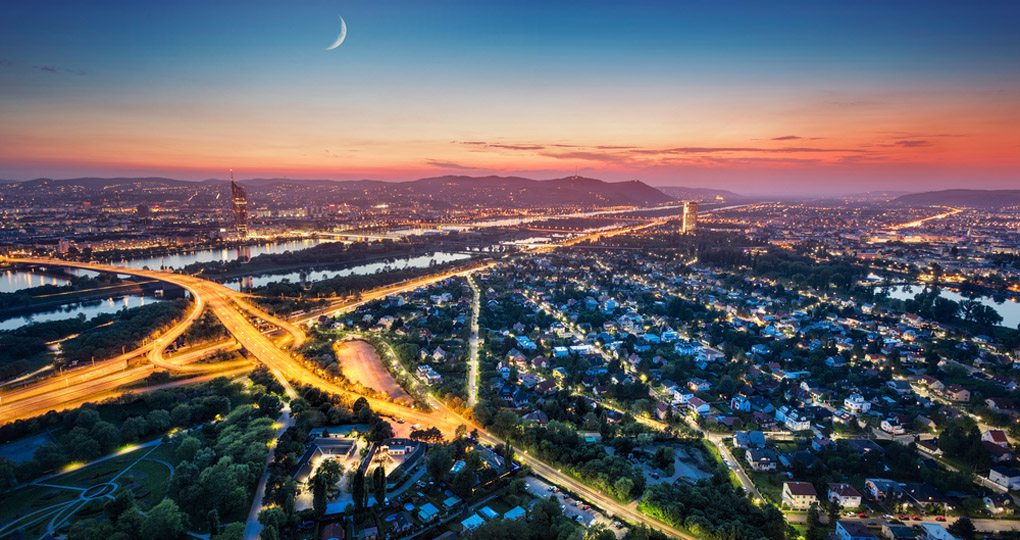 The two major airports in Austria are Vienna and Salzburg. However, Innsbruck also has an airport with many international flights.

Year-round direct flights to Vienna are offered from many major airports in the US such as Atlanta, New York, Chicago, and Los Angeles. A connecting flight is required to get to Salzburg or Innsbruck from the USA.

Toronto and Vancouver both have direct flights to Vienna, and multiple flights to Salzburg and Innsbruck, although these flights require a connection. 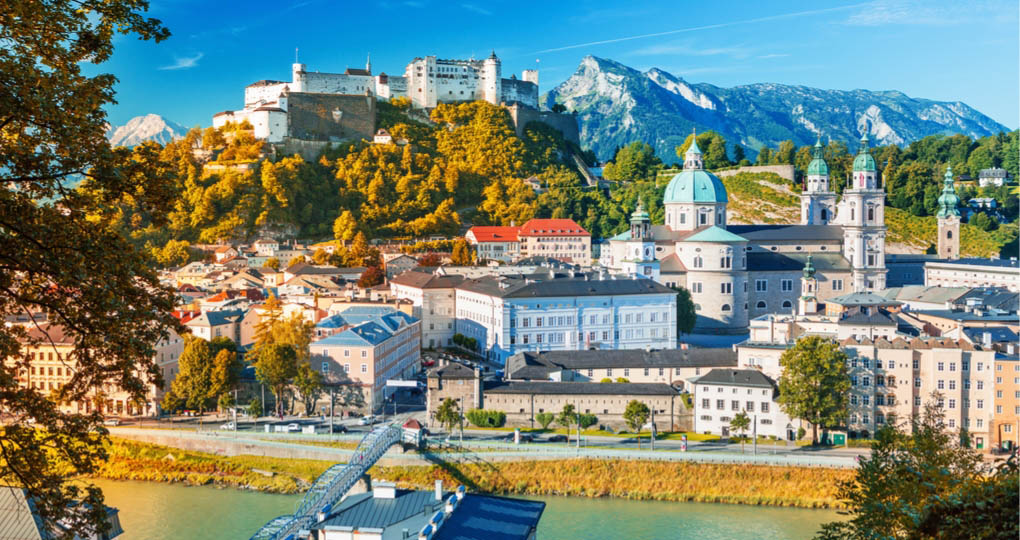 Vienna is a vibrant city full of music, culture, and tradition. The national capital embraces both imperial and modern traditions and is home to many cultural events, coffee houses, and wine taverns. It’s also where you’ll find some of Austria’s most iconic landmarks such as Schonbrunn Palace, the Hofburg, and Belvedere Palace.

Listed as a UNESCO World Heritage Site, Salzburg is the birthplace of Mozart and known as Austria’s centre for musical culture. It’s a great city in which to see a musical performance, whether an opera, concert, or musical, either at the opera house or as part of the famous Salzburg festival. The old town also has many castles, palaces, and museums to explore.

Innsbruck is a winter sports haven that welcomes thousands of tourists a year. It is tucked away in the Austrian Alps and not only offers stunning scenery and outdoor experiences, it also has a rich history and is home to some very unique museums. The city offers a perfect mix of mountain and city experiences.

The Austrian Alps are an outdoor lover’s paradise, offering majestic views and plenty to do on an active vacation. The Alps stretch across the country and offer many opportunities for hiking and skiing, and some of the world’s best winter and summer sports playgrounds.

Other Highlights of Austria Off the Beaten Path 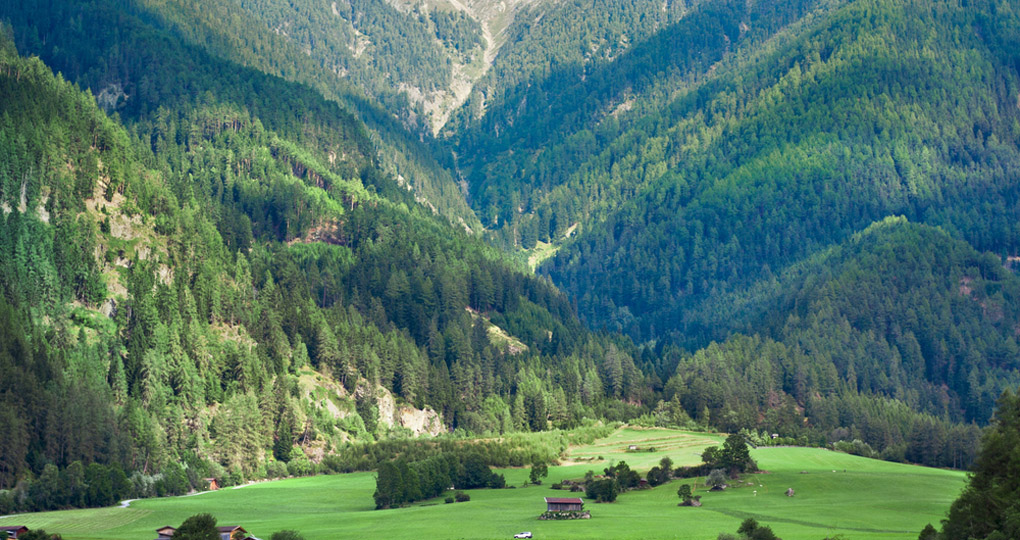 Werfen is a small town just outside of Salzburg that’s home to the Festung Hohenwerfen, the second-largest fortress in the Salzburg region. The fortress overlooks the town from a cliff and offers imposing views. Active travellers will also want to check out Eisriesenwelt, the largest accessible ice cave in Europe.

The second largest city in the country, Graz is one of the best preserved historical cities in Europe. Visit some of its many historic landmarks such as Eggenberg Palace or the Kunsthaus Graz, a massive art museum that is home to works by many famous contemporary artists. Visitors looking for something slower paced can spend the day tasting wine at one of the many wineries located just outside the city.

This small, traditional alpine village with houses and lodges nestled in the trees is home to only 2,600 people. Translated to English, Alpbach means “flowering village,” which accurately describes this town where fresh flowers can be found in the windows and gardens of each house and scattered across the countryside. Offering multiple ski hills, this is a perfect place for a unique ski vacation and for travellers looking to hike mountains and valleys in the summer.

Mellau is a unique town with quite a spectacular history. This tiny village is nestled in the Bregenz Forest in the westernmost region of Austria and has shifted between Austria, Bavaria, and France over the centuries. Mellau combines elements of all these national cultures, with beautiful wooden structures, charming houses, and an abundance of flowers. It’s also home to some very popular skill hills for locals.

Top Activities and Experiences in Austria 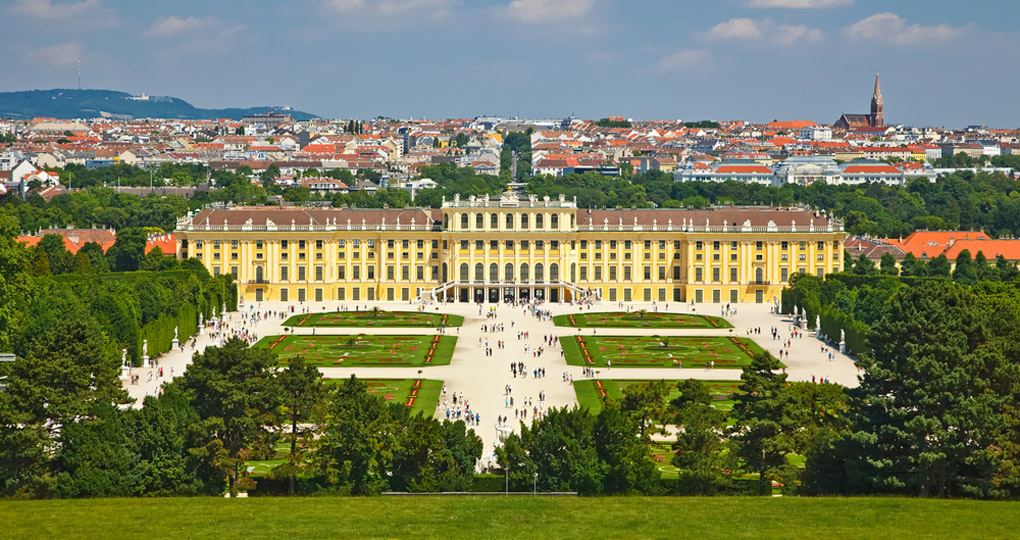 Schloss Schonbrunn was the summer residence of the Habsburgs, who ruled the Austro-Hungarian Empire, and is now a UNESCO World Heritage Site. The palace and its mesmerizing gardens are home to some of the most important architectural and cultural monuments in the country. Today, the palace is open to tourists and also hosts live concerts playing music from Austria’s most famous composers.

Located in the heart of Vienna, the Hofburg was the main residence of the Habsburg dynasty for several centuries. Today, it is the official residence for the President of Austria and one of the city’s most popular attractions, with many museums and galleries within its palace grounds.

This historic landmark sits atop a hill towering over the city of Salzburg. Construction of the fortress started in 1077 at the request of the Archbishops of Salzburg and once finished, it became the largest and best preserved medieval castle in all of Europe. Travellers can learn about the extensive history of the building and enjoy breathtaking panoramic views of Salzburg. 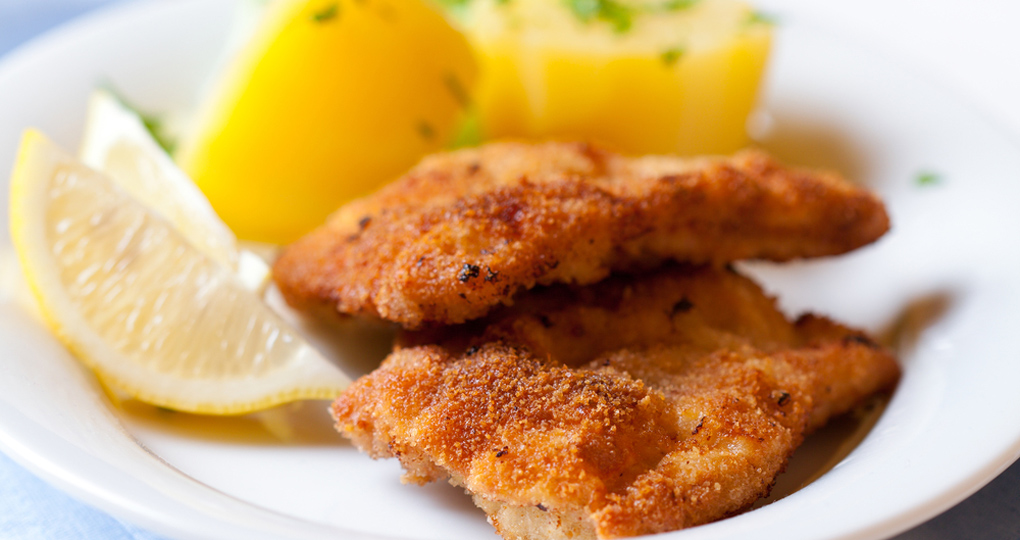 Wiener schnitzel (sometimes spelt wienerschnitzel) is one of the national dishes of Austria. Traditionally, wiener schnitzel is made with a thin, breaded piece of veal that’s fried and served with a variety of different side dishes. Germany has its own version of schnitzel that’s distinct from the Austrian kind; it’s usually made with pork instead of veal.

Tafelspitz is a very popular meat dish in Viennese culture and is popular across the country. This dish is veal or beef that is boiled in broth and served with apples, horseradish, and slices of roasted potato. The dish was made popular by Franz Joseph I, the former Emperor of Austria.

Apfelstrudel is a traditional Viennese apple strudel and is a beloved dessert across the country. The oldest known strudel recipe dates back to the 1600s, so it’s long been a part of the nation’s history. It’s a sweet layered pastry with apple filling that’s baked and served warm, usually sprinkled with powdered sugar. 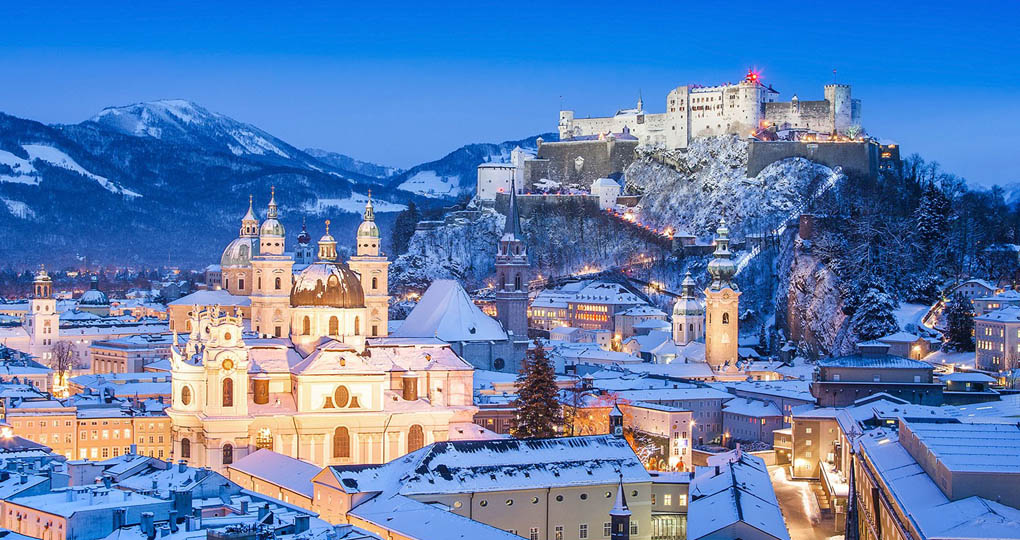 Travelling between cities and regions can easily be done via train, as Austria is centrally located in Europe. Many cities in Austria now offer bike share programs, providing easy and clean transportation around the city. The public transit system also offers a sustainable way of getting around. When heading into the Alps and other natural regions, be sure to stay at accommodations that reduce environmental impact and focus on green initiatives.

Because Austria is centrally located in Europe and shares borders with many countries, it makes for a great connecting destination by train, car, or short flight. Travellers looking to enjoy nature can continue their vacation into Switzerland and see the Swiss Alps. Culture lovers canpass into Italy or head east to Hungary to learn more about the Austro-Hungarian Empire.

Most Popular Itineraries for Austria

To discover the richness of Austria, consider Essence of Austria: Munich to Vienna, a tailor-made adventure that pairs a city-stay in lovely Vienna with a deluxe small group exploration of sites often overlooked. Whether looking for a brief city-stay or to add to a larger European trip, the Highlights of Vienna program is an excellent starting point for a tailor-made trip. Finally, if you’re seeking an in-depth exploration of some of Austria’s finest composers, look no further than our detailed program, Great Austrian Composers Private Tour.

Essence of Austria: Munich to Vienna

Fall head over heels for Austria’s deep valleys and sparkling blue lakes on this leisurely journey through the country. Venture to enchanting alpine villages, charming baroque cities, and fascinating castles. If the breathtaking scenery doesn’t capture your heart, the delicious cuisine certainly will.

FIRST-CLASS | TAILOR-MADE: This short stopover in Vienna is the perfect way to devote a little extra time to one of the world’s great creative cities. Cruise down the Danube and day trip out to Salzburg, birthplace of Mozart and a pilgrimage for Sound of Music fans.