While the Renminbi (RBM) is the official currency of China, this monetary form is mostly used for international trading. Thus, the Yuan (CNY) is the most common currency in China. Credit cards like Visa and Mastercard are accepted in the larger cities, but should not be relied on at all times. Thus, it’s good to carry cash. Luckily, ATMs are found in all the major cities and towns.

Mandarin is the official language of China, but there are many dialects throughout the different regions, such as Cantonese in the south around Hong Kong. Many people, especially younger people, speak at least a little English, particularly in the major cities and tourist centres. English signage is available in major airports, metros and bus terminals.

With China being such a large geographic area, the climate varies from region to region. The best times to travel to China are generally from March to May and from September to early November when the temperature ranges from 10°C/50°F to 22°C/72°F. It’s better to avoid the crowds in the first weeks of May and October since these are long weekend holidays for locals.

China has a diversity of climates comparable to North America. Most areas in winter are dry and cold and the temperature is around 10°C/50°F or lower. Summer is hot and rainy and the temperature averages 25°C/78°F with monsoon rainfall in southern China. The capital region around Beijing enjoys mid-temperate conditions with all four seasons, while the south around Shanghai, Guangzhou, and Guilin is subtropical. Haikou and Sanya are tropical, with the temperature constantly 20ºC/68 ºF and above. Inversely, Tibet and the Tibetan Plateau are cooler than the rest of the country.

China is an amazing destination for travellers looking for rich culture, history, and wonderful scenery. This is a huge country that balances natural and made-made wonders. History buffs may choose to focus on Beijing and Xi’an while travellers seeking natural beauty might cruise the Yangtze and the Three Gorges region. Fans of big modern cities might focus their journey on Shanghai or Guangzhou. Each part of China offers its own history and beauty, as well as culture, cuisine, and even language. Foodies will also love China’s culinary diversity. 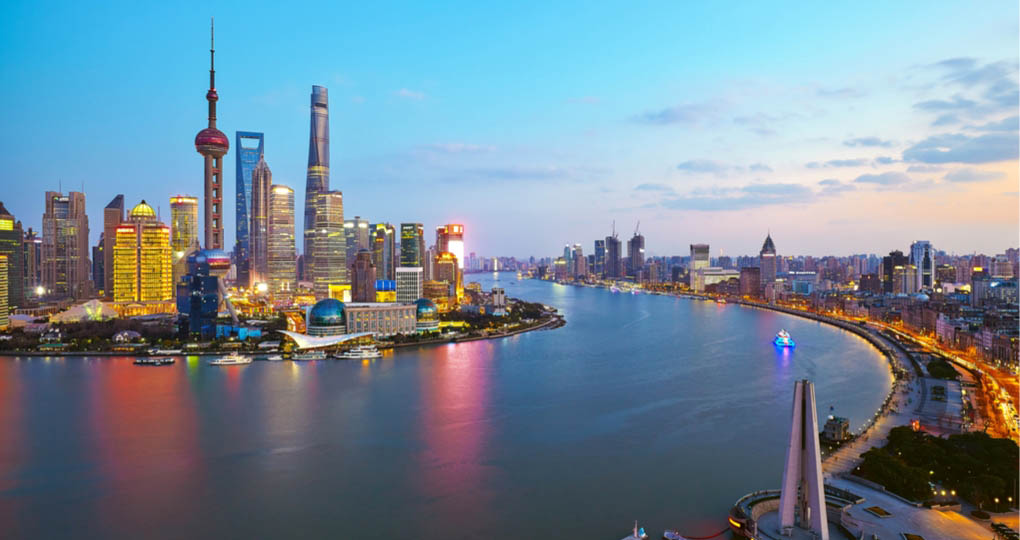 Most airlines have direct flights to Beijing (PEK), Shanghai (PVG), and Guangzhou (CAN) International Airports. From there, it’s easy to connect with domestic flights to your next destination, even on the same day.

Major routes from the United States

In the United States, some major cities like Detroit, Seattle, Atlanta, Los Angeles, Chicago, and Washington have direct flights to Beijing, Shanghai, Guangzhou, and Hong Kong.

In Canada, most non-stop flights to Beijing depart from Vancouver, Toronto, and Montreal. 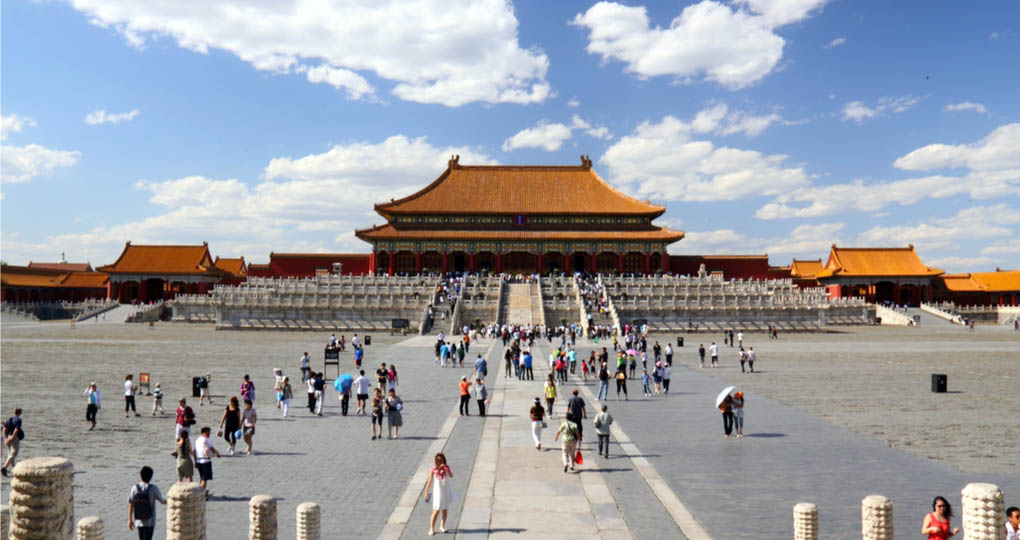 Beijing has been China’s capital for hundreds of years and blends modern city life with ancient wonders. It’s the access point to the Great Wall of China, which is just to the north, as well as the Forbidden City, a massive palace that used to be home to the Emperor of China. Beijing is a great starting location for any journey into China.

Xi’an is the capital of Shaanxi Province and is known as the “cradle of Chinese civilization,” since it was the nation’s first capital. It also marks the start of the famous Silk Road trade route to Europe. The Tomb of the first emperor of China, Qin Shi Huang, and its famous Terracotta Warriors are the city’s most popular attraction, but the preserved City Walls, Giant Wild Goose Pagoda, and atmospheric Muslim Quarter also deserve attention.

Shanghai sits along the Yangtze River Delta and is the financial and trade hub of China. It offers world-class museums, historic buildings along The Bund, the beautiful Jade Buddha Temple, and excellent shopping on Nanjing Road. Be sure to spend some time strolling through the lavish Yu Garden, a highlight when visiting the Old Town.

Located in Jiangsu Province only 120km from Shanghai, Suzhou first gained international attention when Marco Polo dubbed it the “Oriental Venice” due to its canals. It’s a beautiful city known for the intricate canal system and historic gardens. Take a boat ride on the Grand Canal, explore the ancient private gardens at Humble Administrator's Garden or the Master-of-Nets Garden, and discover all types of embroidery at the Embroidery Research Institute.

The longest river in Asia and the third-longest river in the world, the Yangtze flows an impressive 6,300km across China from west to east. You can take either a 4-day downstream or 5-day upstream all-inclusive cruise and enjoy the majestic mountains and mysterious cliff scenery of both banks along the river. Shore excursions are a great way to see the Three Great Gorges and Shennong Stream.

Other Highlights of China Off the Beaten Path 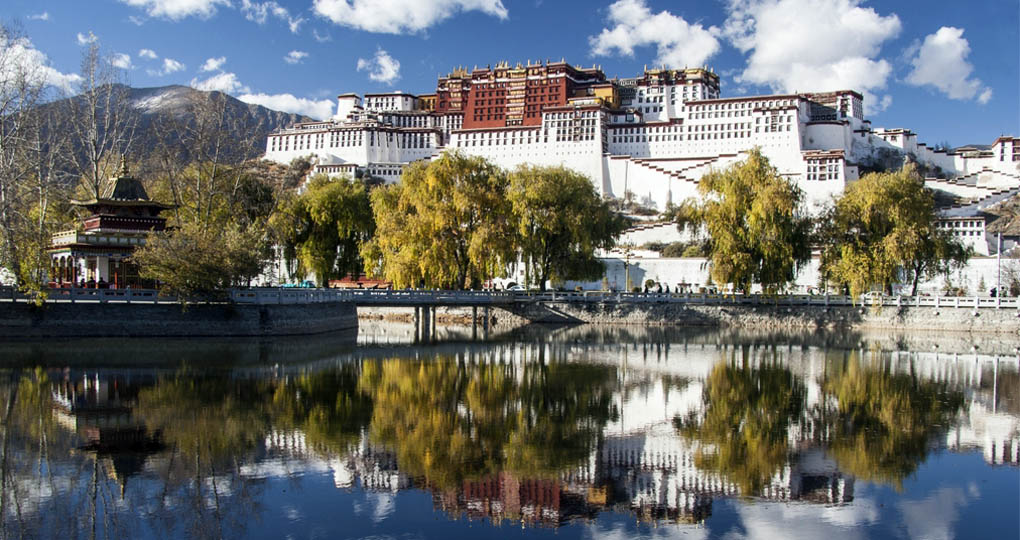 The capital of Sichuan province, Chengdu is famous for the country's national animal, the Giant Panda, which you can see at the Panda Research Centre. The Giant Buddha at Leshan is another key attraction. Sichuan is famous for its spicy cuisine, so Chengdu is also a great spot for foodies to try specialties such as spicy chicken with peanuts (gongbao jiding), mapo tofu, and hotpot.

Guilin is located in the southwest of China and is renowned for its impressive cave system. Travellers can admire the towering green mountains, crystal waters, and natural limestone caves along the Li River. The cascading rice fields of Longji and Elephant Trunk Hill are other attractions.

Known as “Land of the Gods”, Lhasa is the capital of Tibet and the centre of Tibetan religious and cultural life. Lhasa offers a cultural deep-dive with its strong local traditions, amazing natural landscape, and spectacular histori buildings such as Potala Palace, former home of the Dalai Lama, and Jokhang Temple.

Also known as the Yellow Mountains, Huangshan is a granite massif made up of 86 different peaks, low hanging clouds, and some of the most beautiful scenery in the world, which has inspired hundreds of poems and classical paintings. It’s a great place to take a cable car ride up the steep peaks and pathways to see some of the area’s most famous viewpoints.

Top Activities and Experiences in China 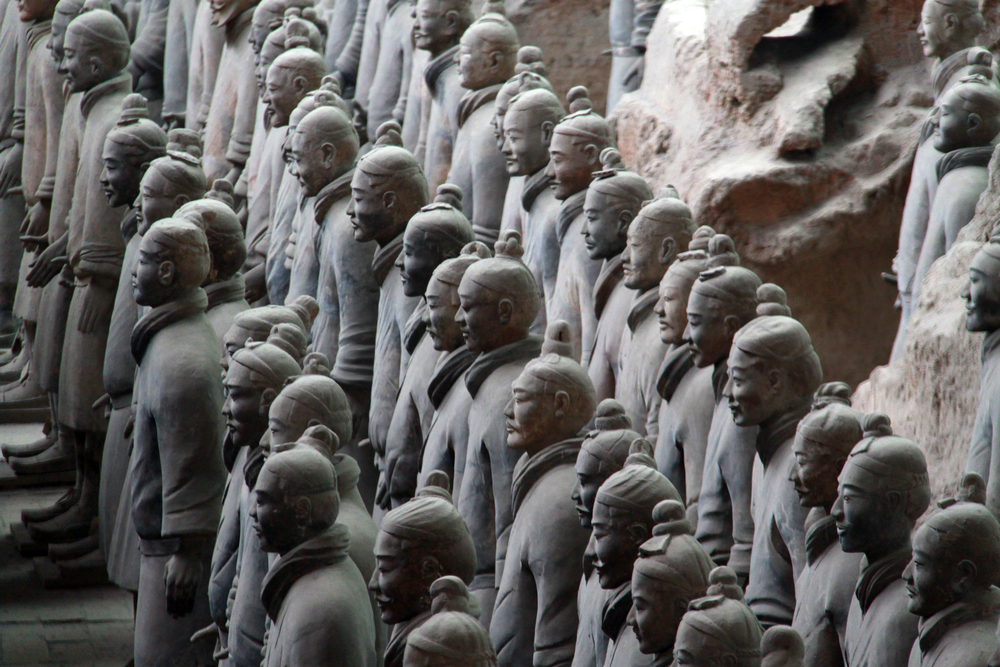 Spend the day hiking along the world's longest man-made structure. During the three to four hour trek, you will admire the extraordinary scenery and enjoy the bucket list views. The trek can be a bit of challenge, but it’s worth the adventure, not to mention the bragging rights of having hiked the Great Wall.

Spend an evening enjoying the Beijing Opera, a traditional style of Chinese performance, or a Chinese acrobatic performance in Shanghai, which incorporate bright artistic designs and elaborate acrobatics. The Tang Dynasty Show in Xi’an is another must-see experience that attracts hundreds of thousands of tourists every year.

If you're an animal lover, be sure to add a visit to the Giant Pandas at the Chengdu Research Base. Learn about their Giant Panda breeding program and observe up close how these cuddly national animals play, munch on bamboo leaves, and sleep in a natural, safe habitat.

Marvel at the Terracotta Warriors

One of the most important archeological finds in history is the vast collection of terracotta sculptures resembling the armies of Qin Shi Huang, China’s first emperor. Discovered in 1974 in Xi’an, these life-sized soldiers still stand beautifully preserved in the Terracotta Museum.

Explore the Canals of an Ancient Water Town

Visit one of the well-preserved ancient water towns around Shanghai. Away from the hustle and bustle of the modern city, you can take a gondola ride along the canal and stroll along the arched bridges and cobblestone lanes. Options include the Zhouzhuang Water Town, Tongli Water Town, and Luzhi Water Town.

Tai Chi is considered a national sport in China. Inspired by Taoist philosophy (the balance of Yin and Yang), Tai Chi seeks to regulate health of both body and mind. Although it’s technically a martial art, it’s known worldwide as a yoga-like stretching and breathing exercise. It’s usually done in the early morning. You can join in a Tai Chi session in local parks across China. 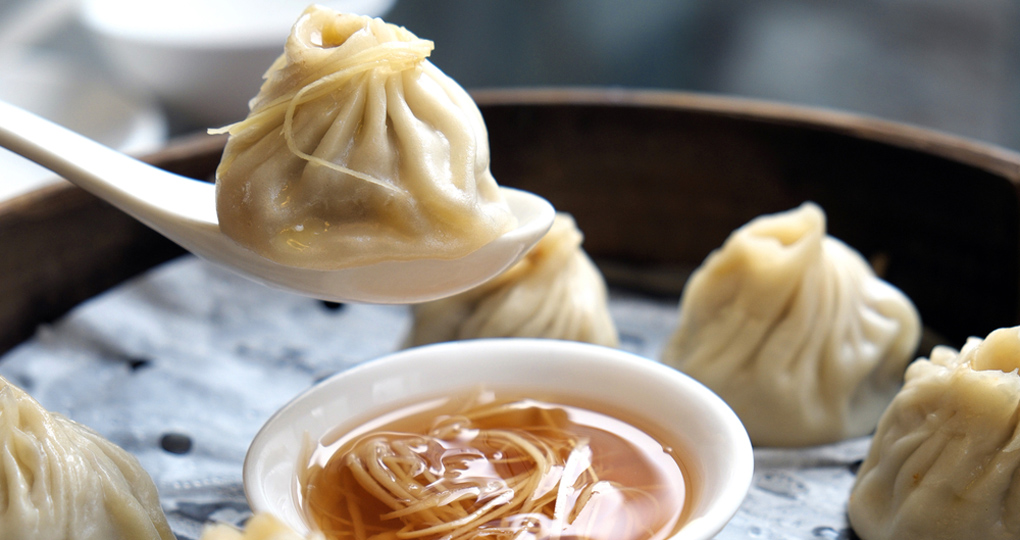 A special dish in Beijing that’s been beloved for hundreds of years, Peking Duck is an elaborate dish of roast duck, painstakingly prepared and served as several dishes over several courses. Often, the chef will slice up the roasted duck right in front of you at your table.

When you visit Sichuan, be sure to try Chongqing hotpot, the famous hotpot of Sichuan. Made with a variety of ingredients such as meat, vegetable, bean curd product, and mushrooms that are boiled into a soup and then served with a variety of sauces, hot pot is a simple and fresh dish to share with friends.

This 100-year-old spicy dish is made with tofu, fried ground beef, green onions, and spices all mixed into a savoury sauce. It’s usually served with a heaping bowl of rice. You can order this Chinese favourite at any restaurant.

Dim Sum is part of the local lifestyle in Canton and Hong Kong. Today, it's become popular in many other cities in China and across the world. Literally translated, Dim Sum means “morning tea” (“yam cha” in Cantonese) as tea is typically served with Dim Sum. These stuffed dumplings are served steamed, baked or fried and are a popular street food and snack dish. You can order and share with your friends to try as many as different flavours as you want. 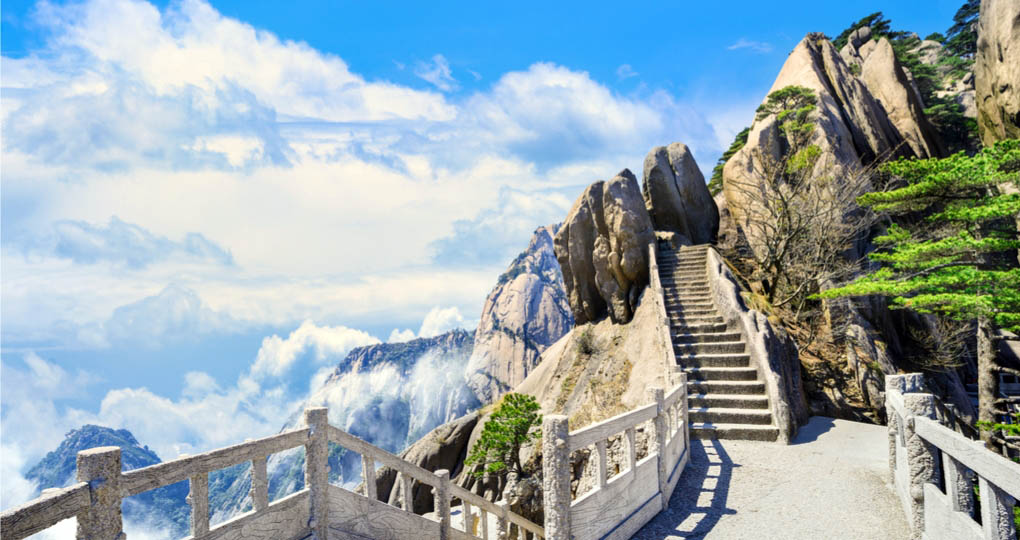 Since China has a very-well developed high-speed train network, taking a high speed train between cities instead of travelling by domestic planes will help reduce your carbon footprint. Reusing the hotel linen during a short stay will also help save water. Also be sure to buy locally produced crafts from artisans to support local economies and don’t buy any black market goods or illegal animal products.

After an enjoyable trip in China, extend your trip to many other destinations around Asia with convenient gateways from Beijing, Shanghai, and Hong Kong to Japan, South Korea, Mongolia, Russia, India, and Southeast Asian countries, such as Singapore, Thailand, Vietnam, Cambodia, Indonesia, Malaysia.

Most Popular Itineraries for China

A Taste of China is a great 8-day introduction to China. This short and sweet package includes three major destinations: Beijing, Xi’an, and Shanghai. Have a little more time to spend? The private 11-day China Odyssey trip will let you explore China’s over 5,000-year history in more depth, with visits to Xi’an, Guilin, Shanghai, and Suzhou. Roof of the World ventures into Tibet to visit Lhasa and explore the history of Tibetan Buddhism.

FIRST-CLASS | SMALL GROUP: The ideal locally hosted tour to visit four of China’s major destinations including Imperial Beijing, the ancient capital, Xian and the modern futuristic Shanghai all in 10 days.

The ultimate locally escorted tour for China visiting Imperial Beijing, the ancient capital, Xian, exotic Guilin and vibrant Shanghai with a day to the beautiful Suzhou. Most meals included.

FIRST-CLASS | PRIVATE-GUIDED: Journey to the top of the Himalayas to discover Tibet and the Roof of the World. Staying in first-class accommodations, you’ll travel through this ancient land and explore the key sites of Tibetan Buddhism, including the Pelkor Chode Monastery in Gyantse, the summer palace of Norbulingka, and marvellous Potala Palace in Lhasa.