Spanish is Bolivia's official language. There are also 39 Indigenous languages also spoken in different regions of the country, including Quechua, Aymara, and Guarani. Half of the population has an Indigenous mother tongue, which means that Bolivian Spanish can vary in vocabulary and pronunciation depending on the region.

Bolivia is a year-round destination depending on what region you wish to visit. Typically, the best time to travel to Bolivia is the dry season from May to October (winter), although temperatures will drop considerably at night. This time of year also allows for fewer travel interruptions due to weather. From November to April (summer), temperatures are warmer, but it is also the wet season, which is ideal for visiting the Uyuni Salt Flats and witnessing their incredible mirror effect.

Bolivia has two distinct seasons, summer and winter, and different climates that vary depending on region and altitude. Summer (November to March) is considered the wet season and winter (May to October) is the dry season in most areas. The Andes and Altiplano region is typically cold and dry, with temperatures in summer rising to 22°C/72°F and dropping to 15°C/59°F in winter, with nights just above 0°C/32°F. The Yungas and Chapares regions have a humid tropical climate with distinct wet and dry seasons. Summers are hot and humid with temperatures rising to 31°C/88°F with heavy rains causing flooding in some parts. Winters are slightly cooler and dry with clear skies on most days. The Valley region is a temperate climate and considered the most comfortable year round with temperatures ranging from 17°C–27°C/63°F—81°F with cooler nights. The Chaco Scrub and Plains are desert climates and do not see extreme temperature changes between seasons. Winters are typically hot, dusty and dry with temperatures rising up to 37°C/99°F and summers are hot and muddy due to the increased rain.

Bolivia has a variety of attractions to appeal to all kinds of travellers. Culture lovers and history buffs can learn about the history of the Incas and explore colonial cities. Nature lovers and photographers can enjoy breathtaking sights such as the reflecting waters of the Uyuni Salt Flats. The country also has a lot of hiking opportunities for active travellers, although travellers do need to keep the altitude in mind when booking trips. 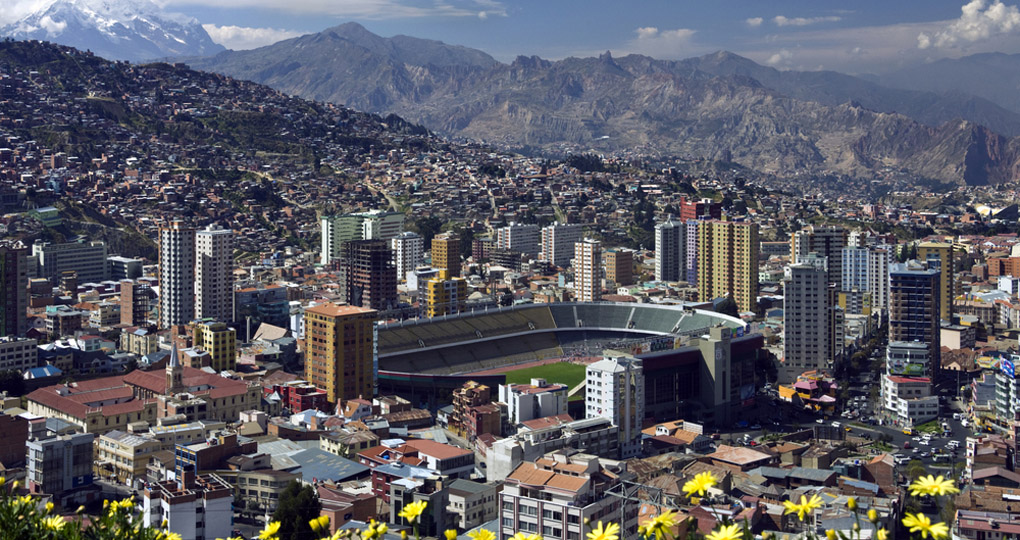 Boliviana is the only airline with a direct flight from the USA, departing Miami and arriving in Santa Cruz. Major airline hub cities like New York, Atlanta, Houston, Los Angeles, Dallas, and San Francisco require stopovers in either Bogota, Lima, or Panama City.

There are no direct flights from Canada. Travellers need to make at least one connection to reach Bolivia, usually in Miami, Bogota, Lima, or Panama City. 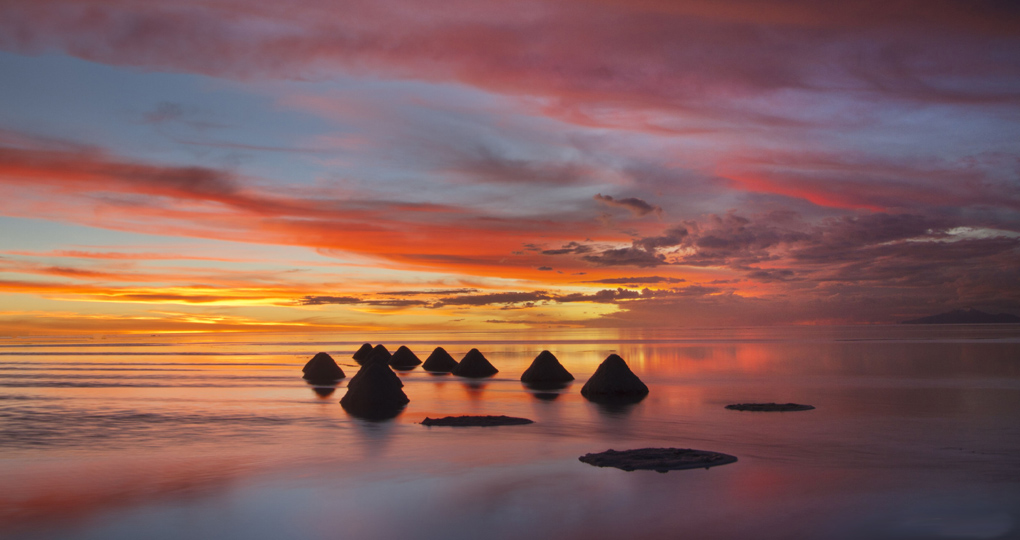 La Paz is one of Bolivia’s major cities and one of the highest cities in the world. Located on a plateau in the antiplane of the Andes at 3,500m above sea level, the city offers a spectacular panoramic view of the Andes. The old town boasts beautiful colonial Baroque architecture. The city has a variety of restaurants and cultural attractions that make it a comfortable place to visit.

The Salar de Uyuni, also known as the Uyuni Salt Flats, is the largest and highest salt desert in the world, with an area of 10,582 km. The flats are great to visit anytime of year, but they are particularly great during the rainy season. During this time, the rain collects and creates a thin layer of calm water on top of the flats, which then reflects the sky and clouds creating a magical mirror effect and an endless horizon. This phenomenon typically occurs between January and February and sometimes lasts until the first week of March.

Lake Titicaca is the highest-navigable lake in the world, located at 3,812m above sea level. Just over half of the lake is located in Peru, with the other 40% in Bolivia. The lake is not only naturally beautiful, but significant to Bolivian culture as the legendary birthplace of the first Inca Emperor. Sun Island is the largest island on the lake and a significant Inca site, with other 80 ruins. Most of the island is inhabited by local Indigenous farmers and fishers.

Other Highlights of Bolivia Off the Beaten Path 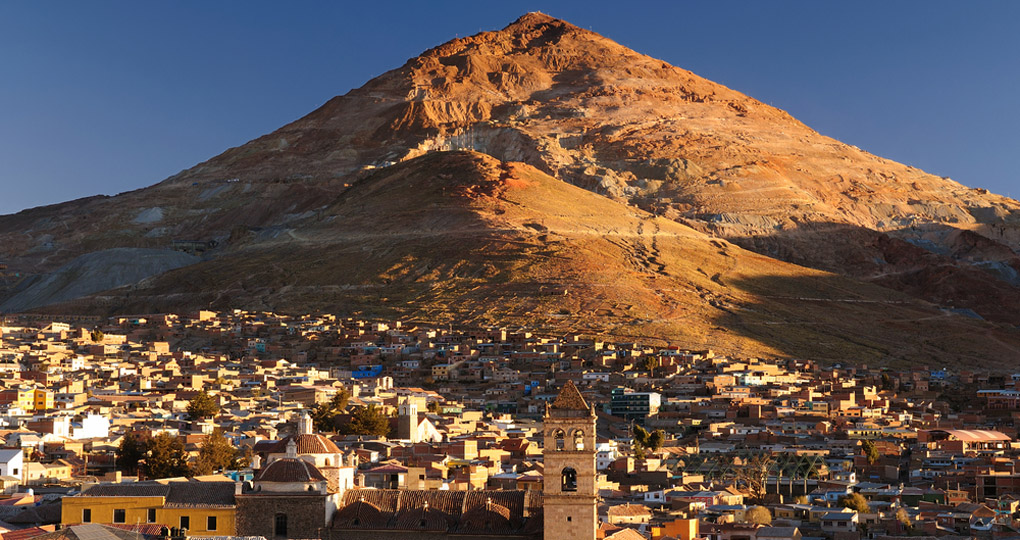 Santa Cruz is a tropical paradise, with a pleasant climate in addition to cheerful and friendly people. It’s the most populous city in Bolivia and the country’s economic centre. Travellers can visit the beautiful Metropolitan Cathedral, stroll along Monsenor Avenue, or visit nearby Yvaga Guazu Park, where they can see ancient trees and a wide range of flowers all year round. Santa Cruz is also a gateway to Amboro National Park and Cotoca town.

Potosí is a Bolivian city with a long mining history. The working silver mine, Cerro Rico, is one of its main attractions, allowing visitors to head underground to experience the living and working conditions of Bolivian miners. Potosí also has la Casa de la Moneda and Plaza10 de Noviembre, which are significant historical sites, with ornate colonial architecture and historical attractions.

The Bolivian Amazon is divided into two zones: one is the Pampas with very large savannas, immense wetlands, and fewer Amazon trees; and the second is the jungle/rainforest “selva” region. There are various ways to access the Bolivian Amazon, but the most popular is through the town of Rurrenabaque, which has a well-established tourist infrastructure for jungle tours.

Top Activities and Experiences in Bolivia 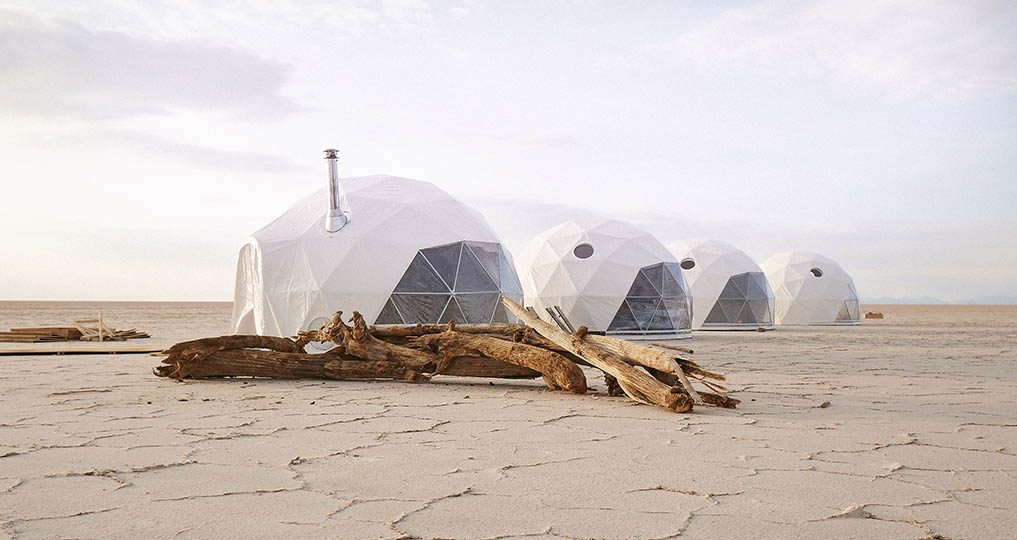 You can catch this cable car at the former train station. It’s known as the Red Line and allows you to enjoy the best view of the beautiful architecture of the city and the red clay houses that give La Paz its unique look.

Laguna Colorada or the Red Lagoon is located at an altitude 4,260m in the southwest of the altiplano and close to the border with Chile. The lagoon is known for its spectacular red colour and beautiful flocks of James, Andean, and Chilean flamingos. The surrounding landscape of snowy mountains is also breathtaking.

Camp on the Uyuni Salt Flats

You can take advantage of the unique opportunity to stay on the Uyuni Salt Flats themselves, sleeping in a geodesic dome. Camping on the flats allows you to stay up late to enjoy the views of the Milky Way—Uyuni is considered the best stargazing spot on the planet. You may also have the chance to wake up after a rainfall and emerge from your dome into what looks like a sea of sky.

Soak in Hot springs in Potosí

Experience a variety of hot springs in Potosí that have been created by the heavy activity from the Polques Volcano. Relax in the mineral-rich thermal swimming pools and lagoons with water temperatures usually at 28°C–30° C/82°F—86°F. 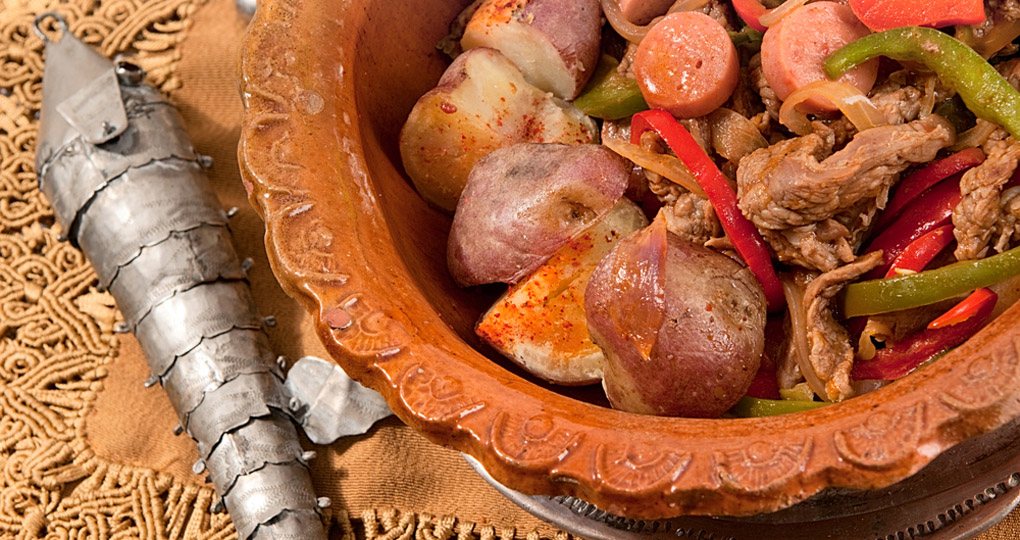 Anticucho is a flame-grilled cow heart served with grilled potato smothered in spicy peanut sauce. It is considered a street food staple which can frequently be found outside the local watering holes. It’s a local favourite.

Sometimes referred to as “Andean stir fry,” this simple but tasty dish consists of pieces of sliced beef, fried sausage, onions, bell peppers, and chili peppers topped with ketchup, mustard, and mayonnaise on top of a bed of french fries. It is a very popular dish and one of the most emblematic dishes of Bolivian gastronomy.

Traditionally, Charquekan was a stew of dried beef or llama meat that was typically eaten by merchants travelling between destinations or peasant farmers. Today, it’s made with ground beef, potatoes, pumpkin, onions, and peas or corn topped with a fried egg is popular with more than travelling merchants and farmers.

This traditional Bolivian drink can be found at food stalls in most markets. Mocochinchi is made with peaches that have been peeled and dried, left in water overnight, then boiled with cloves, cinnamon, and other spices. It is typically served cold. After finishing your drink, it’s customary to eat the peach. 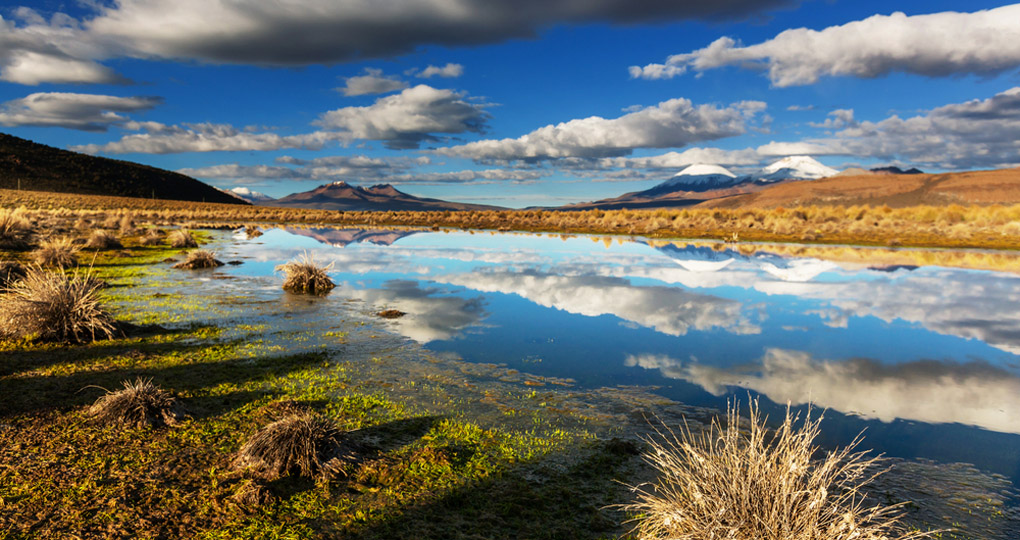 The Bolivian government is very serious about carrying out tourism with the least possible impact on natural habitats. Ensure the company you are booking your tour or trek with treats their guides and porters fairly and respects the cultures and environments their tours are based in. Book with tour operators who are dedicated to sustainable travel and committed to responsible and ethical practices. Rest peacefully and stay in eco-lodges and hotels when possible, as they focus on providing sustainable accommodations that reduce the impact on the environment and locals. Try to travel with reusable items to help reduce waste, like reusable straws, refillable water bottles or even better, reusable water bottles with filters. Avoid plastic bags or items wrapped in plastic and try to take rubbish with you when you can. A good guideline? If it came in your luggage, it should leave in your luggage.

Bolivia is in the centre of South America, making it a great starting point for a trip through several other countries such as Peru, Brazil, Argentina, or Chile. Combine Peru and Bolivia by visiting both sides of Lake Titicaca or visit the Uyuni Salt Flats then transfer by road to the Chilean border and visit the Atacama desert before continuing on to Santiago. You can also take a train from Uyuni and go to northern Argentina where you can visit the beautiful Salta region, Iguassu Falls, the Mendoza wine region, or Buenos Aires.

Most Popular Itineraries for Bolivian

Wonders of Bolivia offers a week-long introduction to Bolivia’s most popular locations and sites, such as La Paz, Sun Island, and Uyuni. The Best of Bolivia and Peru offers an opportunity to explore the best of both countries over 10 days that include Machu Picchu, Cusco, and La Paz. Classic Best of Bolivia explores historical sites in  La Paz, Sun Island and Lake Titicaca, and Uyuni. Potosi: City of Silver is a 3-day visit to explore the rich colonial history of Potosi and Cerro Rico.

Landlocked in the heart of the Andes Mountains, Bolivia remains a well-kept secret. Often overshadowed by its neighbours, Bolivia is a traveller’s dream, with beautiful landscapes and a culture all its own. Take in the key sights over 7 days, from spectacular ruins to eerie salt lakes, and the world’s highest capital, La Paz

DELUXE | PRIVATE-GUIDED: Landlocked in the heart of the Andes Mountains, Bolivia remains a well-kept secret. Often overshadowed by its neighbours, Bolivia is a traveller’s dream, beautiful and full of culture. Take in all the key sights over 8 days, from spectacular ruins to glittering salt lakes, and the world’s highest capital, La Paz.

Visit Potosi, a famous colonial city and main source of silver during Spanish colonial times. Explore the mines, visit the mint and discover why a trip to Potosi is a trip back in time.