The Philippine Peso (PHP) is the currency of the Philippines. Credit cards are accepted by major hotels and larger restaurants, while cash is preferred at small shops and businesses. ATMs are available in large cities, but not in rural areas, so plan ahead.

Filipino (Tagalog) is the official language of the nation, although English is also spoken. Most Filipinos speak some English, but you shouldn’t assume that people will understand you, especially outside of the major tourist centres.

The Philippines has a warm climate year round but the best time to visit is usually between November and April. It is best to avoid typhoon season from June to October as there can be heavy rains and high winds.

The Philippines has a tropical climate with hot and humid weather. December to February is the cooler season with trade winds and May to November is the hot and humid rainy season. The hottest months are between March and May. Temperatures fluctuate between 21°C/70°F in the cool season and 32°C/90°F in the hot season.

The Philippines is perhaps best known for its tropical islands and beaches, so will most appeal to those travellers looking for a relaxing escape. Snorkellers and divers will love seeing marine life, coral reefs, and shipwrecks. The destination also has rich culture and heritage, and is a particular delight for foodies. 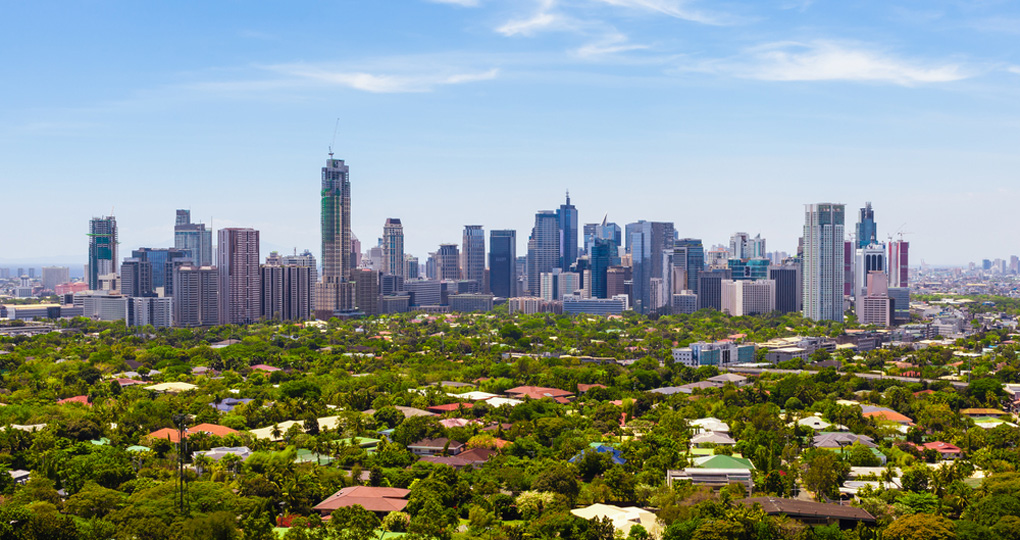 Manila Ninoy Airport (MNL) is the main international airport in the Philippines and major gateway into the country. The airport has four terminals and is located about 7km south of Manila.

Philippine Airlines is the only airline to offer nonstop service from the United States, from Los Angeles, San Francisco, and New York City. Several other airlines have connections in major Asian cities.

Essential Sights in the Philippines 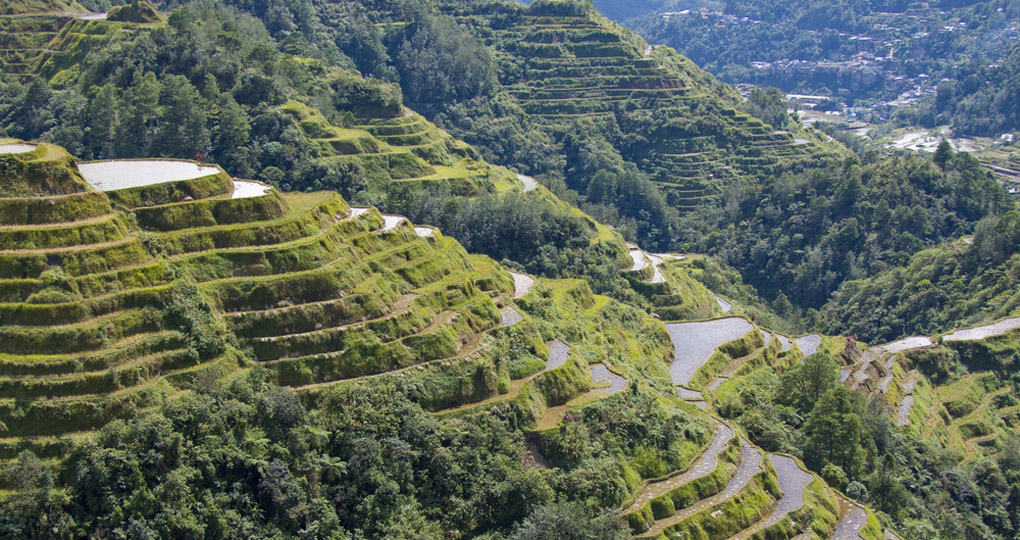 A small island in central Philippines known for its resorts, beaches, and variety of water-based activities. White Beach on the west coast is the most popular tourist spot with bars and restaurants, while the east coast beach side has strong winds for water sports such as kiteboarding. There are also more secluded beaches that are accessible by boat.

These cascading rice terraces carved into the mountainside of Ifugao on north Luzon were made more than 2,000 years ago by Indigenous people of the region, working with minimal equipment. The rice terraces are considered a national cultural treasure and one of the most beautiful sights in Asia.

These hills in Bohol Province are called the “Chocolate Hills” because their green grass turns brown in the dry season, making them look like they’re made of chocolate. The hills are spread over 50 square kilometres, and look symmetrical in shape, making it seem like they’re manmade. However, they’re natural formations, which is even more stunning. Bohol is also home to the smallest primates in the world, the tarsier.

Like other major tourist islands in the Philippines, Cebu offers beaches, turquoise waters, and a variety of water-based activities. Cebu City was also the original capital of the Philippines, so the island also offers many historical sites to explore, including colonial landmarks, museums, and temples.

Manila is the capital of the Philippines, known for its Spanish colonial history and the walled city of Intramuros. Manila also has a vibrant art scene, unique Filipino foods and dishes, and one of the oldest Chinatowns in the world. History buffs will want to visit nearby Corregidor Island, where a major World War II battle took place with American and Filipino soldiers fighting against the invading Japanese.

Other Highlights of the Philippines Off the Beaten Path 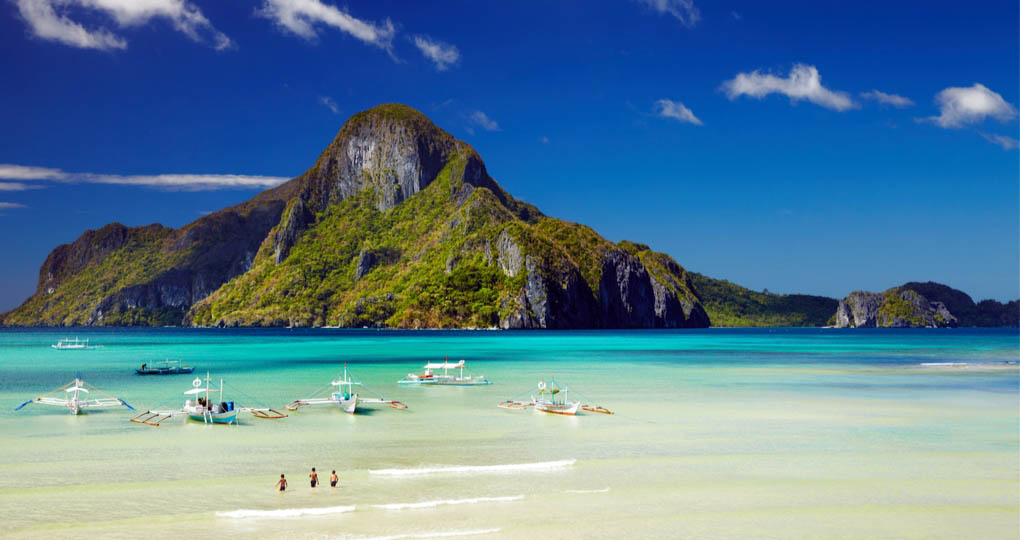 This island in the Palawan Archipelago is known as a world-class wreck diving destination, where scuba divers can see the Japanese shipwrecks from World War II. The island itself is also known for its limestone karst landscapes, shallow water coral reefs, and clear freshwater lakes.

A small, remote volcanic island with some of the best scuba diving and snorkelling in the country. Accommodations choices are limited and services are basic, but if you are interested in fish species and coral, this is the place to go. The marine area has 650 species of fish and 400 species of coral.

El Nido comprises 45 islands and islets with karst limestone cliffs, coves, and lagoons in the Bacuit Archipelago. Travellers can go island hopping, swimming, diving, or hiking in this stunning region, which is quickly becoming a major tourist destination.

Top Activities and Experiences in the Philippines 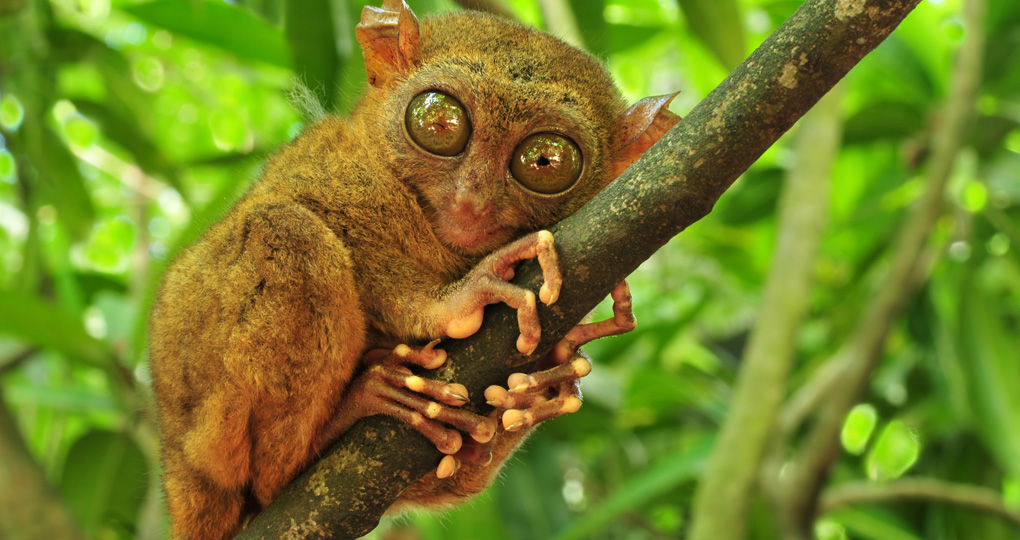 Home to hundreds of species of marine life and coral plus WWII shipwrecks, the Philippines offers divers and snorkellers an underwater paradise to explore. There are dive sites for all levels of amateurs and near all the major islands.

With so many islands, it’s impossible to choose only one to visit. Depending on your vacation time, you might be able to visit two or more major island destinations and then travel around by ferry to explore smaller islands and lesser-visited beaches.

There are countless historical sites to visit across the Philippines, but Intramuros, the walled city in Manila, should be at the top of your list. This 64ha Spanish fortress was built during the colonial era and has many historic buildings and streets to explore. Make sure you wear good walking shoes!

If you visit Bohol, include a stop at the Philippine Tarsier and Wildlife Sanctuary, dedicated to protecting these furry, bug-eyed endangered primates that are endemic to the Philippines.

If you are not keen on water-based activities or have had your fill of beaches, you can visit other nature sites and try adventure activities on land. Take the 70m-long zipline in Boracay, trek to Taal Volcano, or visit Hinagdanan Cave in Bohol. There is no shortage of options. 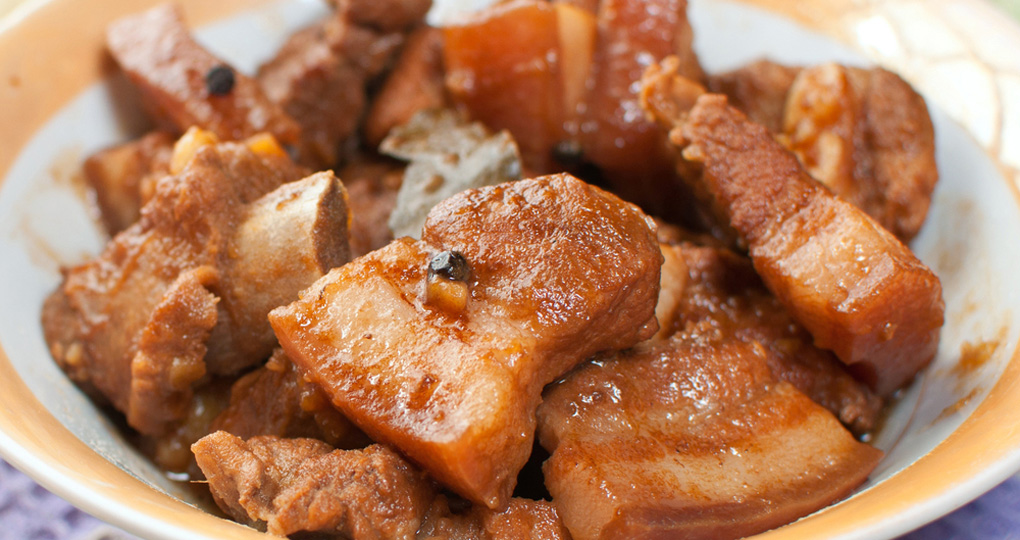 The national food of the Philippines. A balance of vinegar, soy sauce, garlic, bay leaves, and peppercorns and sometimes fish sauce is used to marinade seafood, vegetable, and meats and then simmered slowly.

A centerpiece of any Filipino celebration and holiday is a roasted suckling pig. The pig is stuffed with herbs and spices or just salt and pepper and cooked on a bamboo split for a few hours with constant turning. Lechon is a staple at weddings and Christmas celebrations.

The ceviche of the Philippines is a raw seafood dish made most often with Spanish mackerel and yellowfin tuna. The raw fish is cured with vinegar and normally served for casual gatherings. 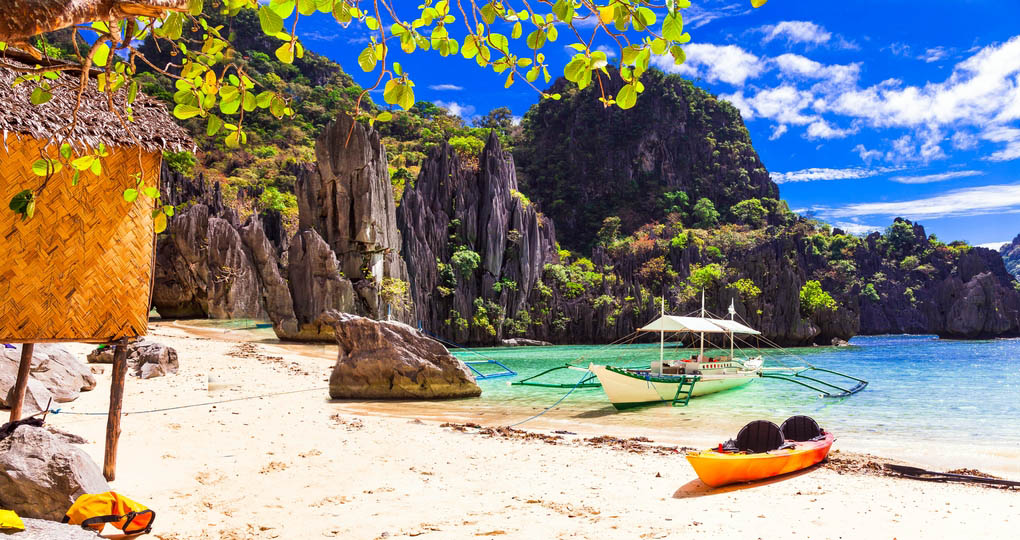 Take your own reusable plastics, such as a refillable bottle, metal straws, reusable cutlery, and a shopping bag to cut down on plastics. Use coral friendly sunblock when on beaches and going snorkelling or scuba diving. Support activities that are not harmful to animals. Reduce resource consumption by limiting water and electricity use. Also, be sure not to stray off the path in national parks or purchase illegal animal products in urban markets.

With direct flights into Manilla from North America, the Philippines are often a self-contained trip. However, there is a wide variety of airlines that offer stopovers in Tokyo, Taipei, Seoul, Hong Kong, Beijing, and Shanghai, making it easy to extend your trip.

Most Popular Itineraries for the Philippines

Essential Philippines is a 9-day introductory tour that takes travellers to Manilla, Boracay and Cebu. Cebu, the Chocolate Hills and Boracay Beach is a 7-day variation that skips out on Manila while offering a bit of natural beauty, history, and beach relaxation. There are also private or escorted tours to the Banaue Rice Terraces as well as 3 and 4-day modules to different locations across the country.

FIRST-CLASS | PRIVATE-GUIDED: Discover the history and beautiful landscapes of the Philippines on this introductory 9-day vacation. Start in Manila, where you’ll delve into the country’s colonial history and visit nearby Pagsanjan. Then spend a few days on sunny Boracay before exploring Cebu City and the Chocolate Hills of Bohol.

MODERATE | PRIVATE-GUIDED: Designated a UNESCO World Heritage Site, it’s not hard to see why this spectacularly laid-out, beautiful rice terraces are a gift of nature. Experience amazing views in this unique setting.