The official currency of the United Arab Emirates is the Emirati dirham (AED). Major credits cards are accepted in malls and major restaurants, but smaller markets only accept cash. You’ll find an abundance of ATMs available across the nation.

Arabic is the official language of the Emirates. English is widely spoken, but knowing a few words in Arabic can be helpful, especially when bartering in marketplaces.

There’s no rainy season in the United Arab Emirates making them easy to visit all year-round. However, the country gets extremely hot from May through September, so the cooler months of October through April are more popular with western travellers. It’s also wise for non-Muslims to avoid travel during the holy month of Ramadan, when there are restrictions on food and drink during daytime hours.

Due to its desert landscape and coastal location, the Emirates has mild winters and hot, sunny summers. Due to the location on the Persian Gulf, the country can be quite humid, making it feel even hotter than it is. There are low levels of rain annually, with most of it concentrated in the winter months. In Dubai, average temperatures are 20°C/68°F in winter and 37°C/98°F in summer.

The Emirates are most popular with travellers who can afford the modern comforts of the nation. The country is especially popular as a stopover point on a trip to the Indian Ocean, or as a honeymoon or family vacation spot. While Arabian culture is typically conservative, the Emirates have worked hard to accommodate travellers from all over the world, so you’ll be surprised by how welcoming the country is. 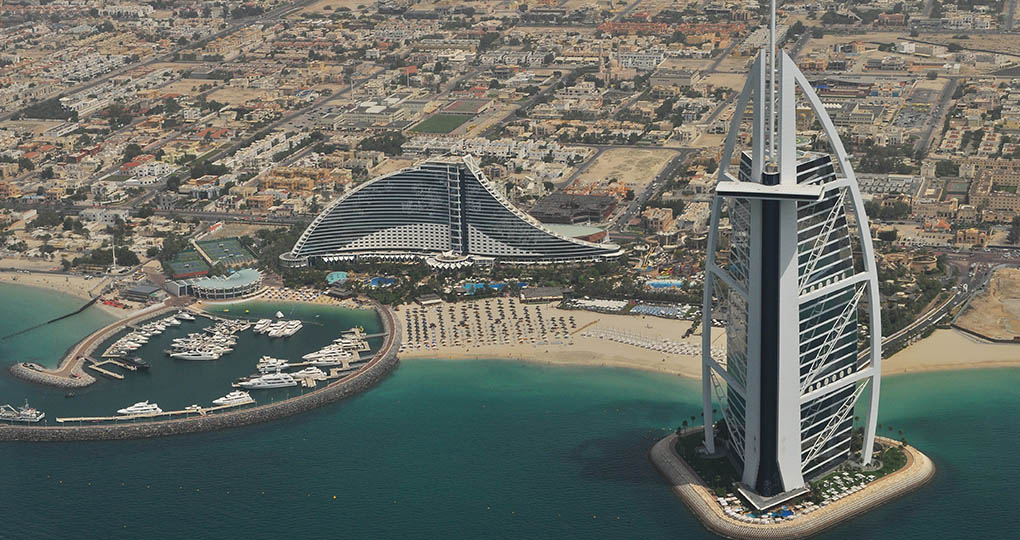 There are direct flights from many American cities to Dubai, including Boston, Chicago, Dallas/Fort Worth, Los Angeles, and San Francisco. Many other flights connect through a gateway city in Europe or other parts of the Middle East.

Air Canada offers weekly nonstop flights to Dubai from Toronto Pearson. Other flights either connect through Toronto or through a gateway in Europe. 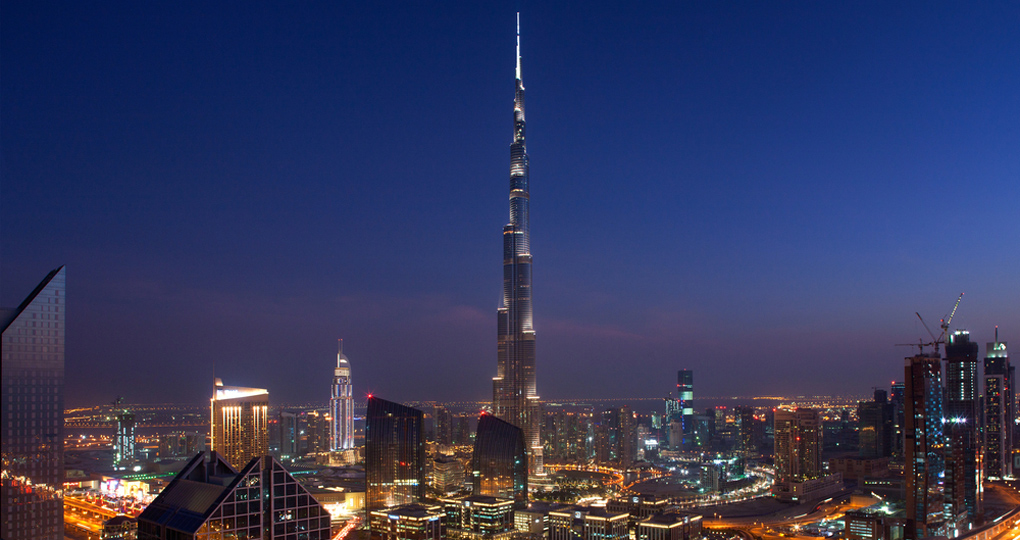 Dubai personifies the 21st-century like no other city. A backwater port town half a century ago, Dubai has grown with the oil wealth of the Emirates and today is a futuristic haven for business travellers, honeymooners, and lovers of culture. Its ultramodern skyline is crowned by the Burj Khalifa, the world’s tallest tower, while the many theme parks, marinas, souks, malls, and museums offer attractions for all manner of travellers.

The Emirati capital is the largest city in the country and the centre of its political power. Located on an island in the Persian Gulf, Abu Dhabi is defined by the mixture of Arabian historical landmarks and modern malls and skyscrapers. Sheikh Zayed Grand Mosque in nearby Fujairah is the most important cultural monument, but the Abu Dhabi Mall and Marina offer more modern comforts for international travellers. The city also has the brand-new Abu Dhabi Louvre, the sister museum to the famous one in Paris.

This “Garden City” is an oasis in the desert, with palm groves, natural springs, and an enviable landscape amidst the mountains. You won’t find skyscrapers or modern malls in Al Ain. Instead, the city has a laidback cultural vibe, with archaeological parks and a historic fort for cultural travellers to explore and the zoo and Wadi Adventure water park for families to enjoy.

Other Highlights of the United Arab Emirates Off the Beaten Path 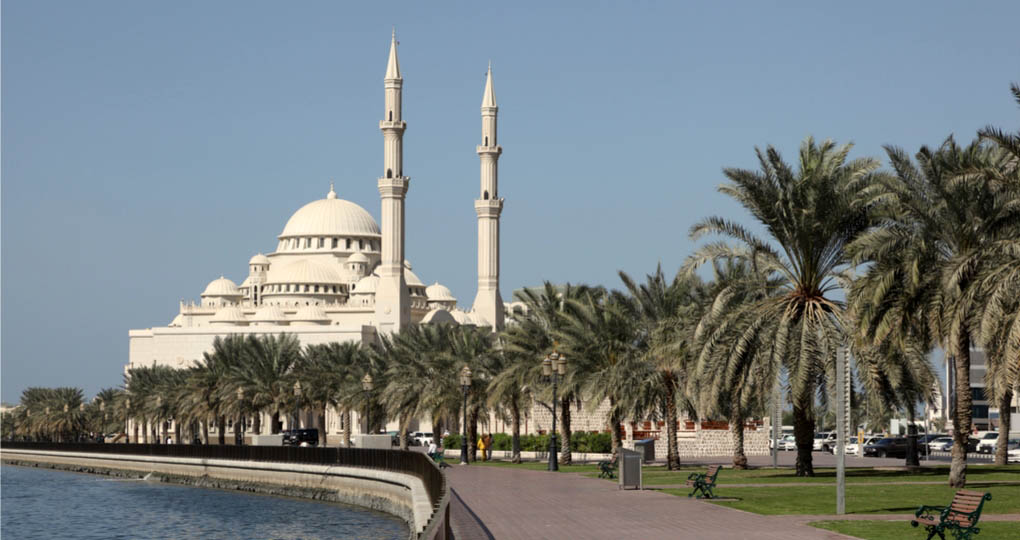 The third-largest emirate, Sharjah works as a convenient day trip for travellers staying in Dubai. Its cultural attractions such as the Sharjah Museum of Islamic Civilization, Sharjah Art Museum, and Al Noor Mosque offer attractive options for afternoon touring. Al Mazar Beach Street is also an appealing spot to spend an afternoon.

The fourth-largest and northernmost emirate is known for its pristine beaches along the gulf and cultural attractions that shed light on past centuries. Landmarks such as the Mohammed bin Salem Mosque, Dhayah Fort, and the National Museum of Ras al Khaimah allow travellers to explore the 19th century trade and historical period, but the beaches and beautiful views of the mountains remain the most appealing attractions for travellers.

Top Activities and Experiences in the United Arab Emirates 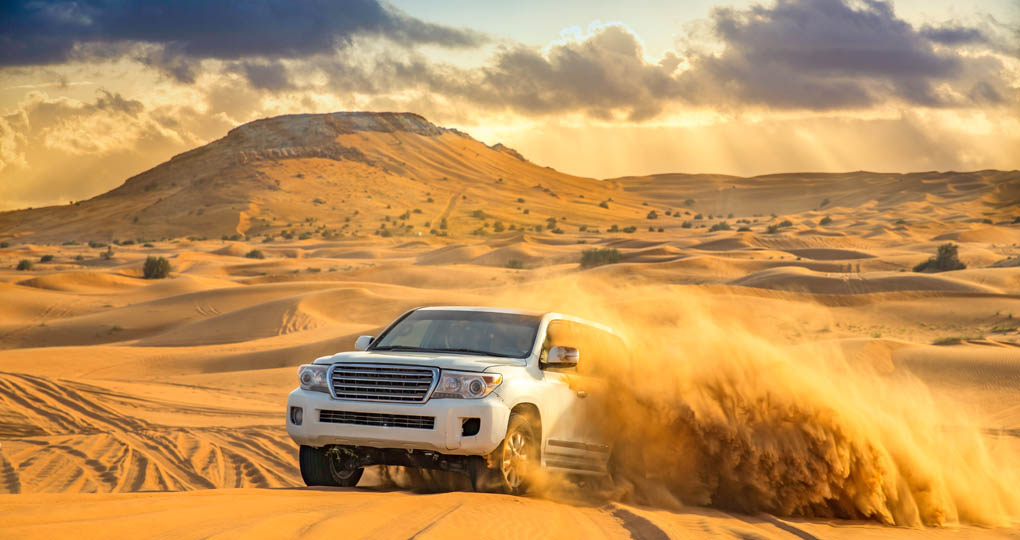 Head on a Desert Safari

Dubai and Abu Dhabi are located along long stretches of desert, so it’s easy for travellers to arrange for a desert safari to head out onto the sand dunes and experience the windswept desert for themselves. Travellers can ride in 4x4 vehicles over the dunes, arrange for a camel ride, or spend the night in a Bedouin tent to enjoy the desert under the stars.

Head up the Burj Khalifa

As the world’s tallest tower, the Burj Khalifa offers a view like no other building. Visitors can head up to the observation decks on the 125th or 148th levels to look out over the city’s skyline, gulf coast, and receding desert. You can even book a dinner reservation or high tea to enjoy a meal like no other.

Go Shopping in the Souks and Malls

The Emirates are some of the most appealing shopping destinations in the world. Whether you want to barter for gold or spices in the souks of Old Dubai or window-shop for designer goods at the Dubai Mall or Abu Dhabi Mall, you’ll find a lot to occupy you and your wallet. 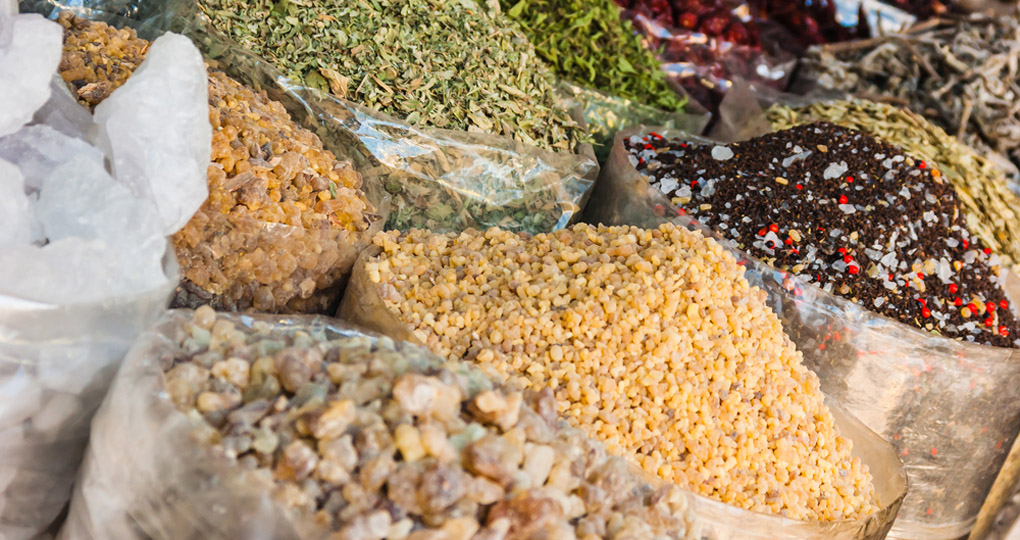 This meat and rice dish is made with lamb, chicken, or shrimp that’s boiled in stock with spices until the meat is tender. The finished meat is then removed and the rice is added along with further vegetables, all being recombined before plating. It’s a popular dinner option.

Often considered the national dish of the Emirates, ghuzi is a roast lamb or mutton that’s cooked with spices and plated on a bed of rice, vegetables, and nuts. All the components of the dish make it a meal in itself.

This savoury and sweet dish of vermicelli and eggs is popular as a breakfast or dessert. The noodles are cooked with spices such as cardamom and cinnamon, which give them a sweet flavour that contrasts with the savoury eggs and nuts such as pistachios.

This “bread salad” is a great vegetarian choice when visiting the Emirates. The salad consists of lettuce, tomatoes, cucumbers, mint, onion, garlic, lemon, olive oil, and toasted bits of bread. It works as an appetizer or a meal in its own right. 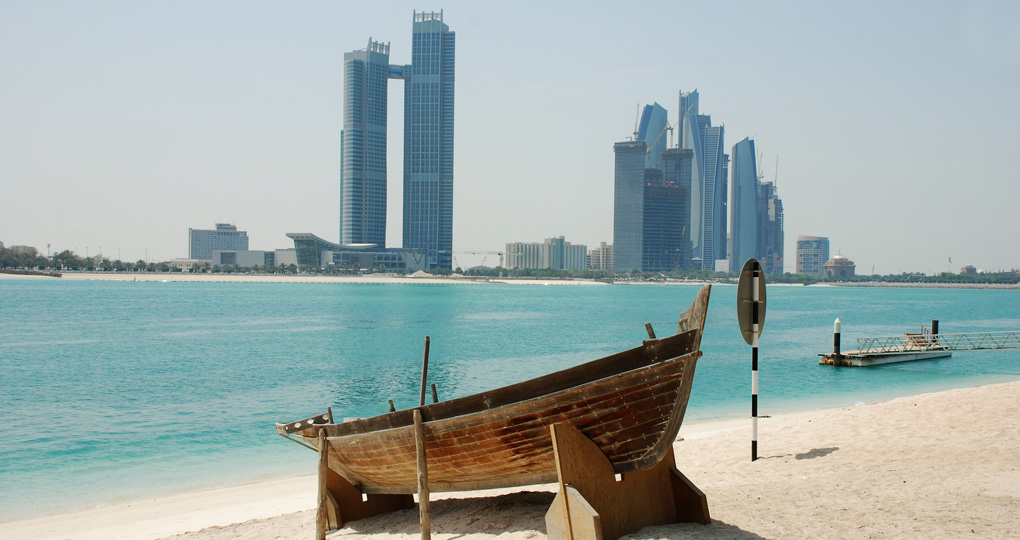 Due to the modern infrastructure and many sustainable travel options in the Emirates, it’s easy to reduce your carbon footprint when travelling. Take advantage of good public transportation in Dubai and Abu Dhabi, opt for sustainable touring options when visiting the desert, and avoid purchasing products made from animals in the souks. Bring a refillable water bottle and reusable bag to avoid plastic waste.

The Emirates are conveniently located to make for easy connections into other Middle Eastern countries or Africa. Travellers can head north to explore Jordan, Israel, and Egypt, or connect onwards to Kenya or Tanzania for a safari. Dubai is a popular stopover point on a trip to the Maldives and other Indian Ocean destinations, so don’t feel limited in what your connection options are when visiting the Emirates.

Most Popular Itineraries for the United Arab Emirates

Discover Dubai showcases the city of the future with a week in Dubai to explore the Burj Khalifa, go shopping, hit the beaches, and visit Abu Dhabi on a day trip. Best of the Emirates splits time between Abu Dhabi and Dubai to delve into the history of the Emirates and showcase the desert and traditional cultural practices. Dubai & Maldives Escape includes Dubai as an appealing stopover option for a few nights to explore the city before spending a week on an island resort in the Maldives.

DELUXE | TAILOR-MADE: Discover Abu Dhabi, the metropolitan capital of the UAE with its melting pot of international cultures, styles and traditions. Then continue onto Dubai, the most vibrant of cities, where the best cosmopolitan, avant-garde architecture blends harmoniously with the mystique and culture of Arabia.