Few travel itineraries offer the chance to see Antarctic life in the wild along with rare stellar phenomena, but for only the second time, travellers will have the opportunity to witness a Total Solar Eclipse in Antarctica. Noted astronomer Bob Berman will join Goway’s Antarctica Solar Eclipse cruise in December, 2021, as onboard ‘astronomer in residence’ during the event.

The last Total Solar Eclipse took place over Antarctica in 2003, when Quark Expeditions launched the first cruise allowing travellers to experience the once-in-a-generation event. Now, that rare opportunity has returned. Goway is inviting passengers to witness the eclipse and benefit from Bob’s expert insights into the phenomenon.

Who is Bob Berman?

One of the world’s most widely read astronomers, Bob Berman is famous for his accessible and often witty takes on astronomy and science, published in Discover Magazine, Astronomy Magazine, and The Old Farmers Almanac, where he’s also served as astronomy editor for the past 25 years. Bob’s sly sense of humour has even netted him guest spots on television shows including Late Night with David Letterman.

Bob is also the celebrated author of eight books, one of which, The Sun’s Heartbeat will be included as a gift – personally autographed by Bob – to Goway travellers booking this journey. 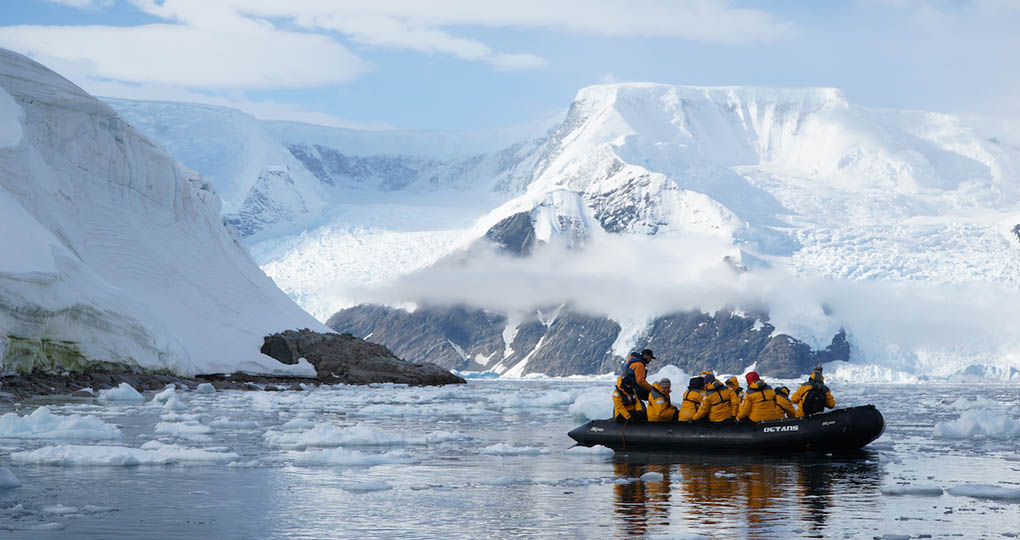 Why See the Total Solar Eclipse on an Antarctica Cruise?

An Antarctica cruise is a dream trip for many globetrotters, but this one is just that little bit special.

A round trip from Ushuaia, Argentina, commonly regarded as the world’s southernmost city, the 20-day itinerary crosses the Drake Passage bound for the Antarctic Peninsula. All the highlights of a more typical Antarctica Cruise are included, with stops at the South Shetland Islands, South Georgia, and the Falkland Islands. Beyond exceptional wildlife viewing, passengers will have a chance to explore the history of settlement in these remote regions and learn about the communities that live there – permanently or seasonally – today.

Zodiac expeditions take travellers in for a closer look at the wildlife that thrive in this inhospitable part of the world. A wide variety of seal, penguin, and whale species call the icy waters and coastal regions of the Antarctic Peninsula home. With almost no human interaction or interference, this is one of the world’s ultimate wild safari experience. South Georgia in particular has been dubbed the “Galapagos of the South Seas” for its wide variety of wildlife. While several hundred people populate the island during the southern summer, only around 16 live there year round, and even then are not considered ‘permanent’ inhabitants.

What makes the Total Solar Eclipse from Antarctica so unusual is its path, travelling from east to west, the opposite of how it would appear in more temperate latitudes. This makes it a unique phenomenon for stargazers at all levels of expertise, and a once in a lifetime opportunity to combine this sight with all a voyage to the Antarctic regions can offer. 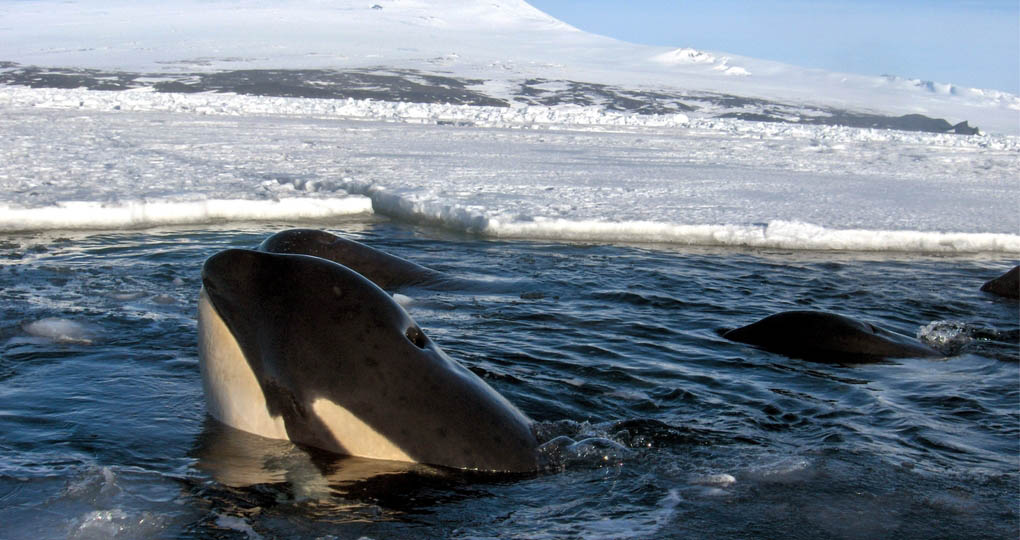 What will I see on an Antarctica Cruise?

This particular itinerary is geared toward stargazers, but it’s also a great choice for globetrotters wanting the classic, comprehensive Antarctica experience.

Any voyage to Antarctica is perhaps first and foremost, a safari. The wildlife is the star (well, apart from the actual star you came to see eclipsed) in this extreme environment. The dynamic contrasts also make an Antarctica cruise a trip unlike any other. There’s a sense of overwhelming wilderness and an almost eerie silence… at least until you come upon a colony of rowdy penguins or seals. Sometimes numbering hundreds of thousands of animals, these serve as stark reminders of just how surprisingly full of life, not to mention critical to our global climate, the icy continent is.

We’ve talked about South Georgia, but you’ll also drop anchor at the Falkland Islands. There’s more to the history of this fascinating archipelago than the namesake conflict that took place in the early 80s. A uniquely British corner of the Southern Atlantic, the Falklands are also a haven for sea birds including a variety of different penguin species.

Your vessel, the Ocean Diamond is also kitted out to put your discoveries into context with informative and fun workshops and expert-led talks. 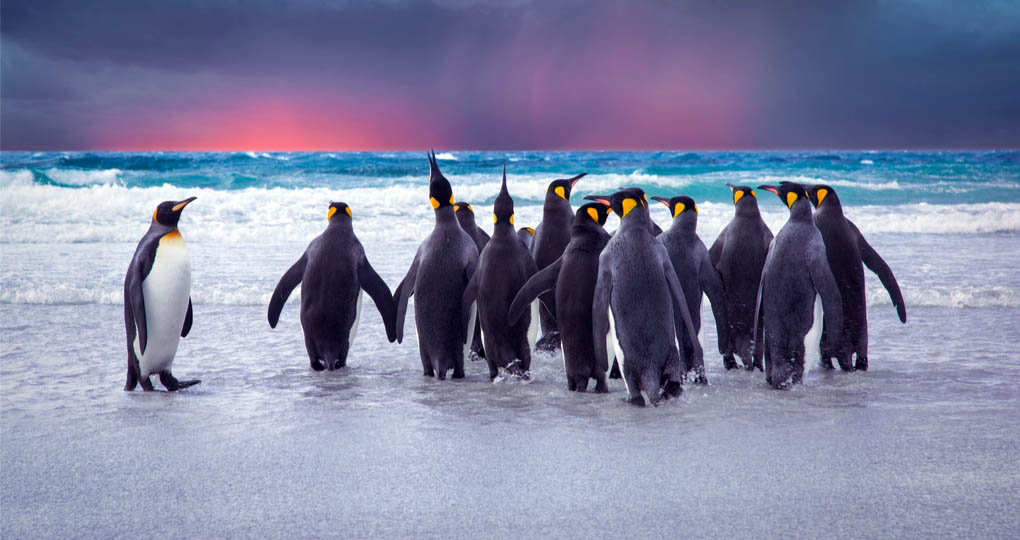 Not to labour a cliché, but when it comes to your vessel in the world of Antarctica cruises, size matters! Vessels must be large and stable enough to withstand the often choppy waters of the South Seas, yet those kitted out for Antarctic cruising are very different from the enormous ‘floating resorts’ that sail the Caribbean or Mediterranean.

The vessel for this itinerary, the Ocean Diamond is built with Antarctic adventures in mind. Accommodating a maximum of 189 passengers, it’s equipped with two stabilisers and an ice-strengthened hull, ensuring a smooth journey. Onboard, each cabin enjoys an exterior view, while passengers have access to a club lounge, restaurant, and library, as well as adventure-geared options such as photography lessons, or informative presentations from experts on the Antarctic.

Of course, any trip to Antarctica also reminds us of our world and climate’s fragility, making eco-friendly travel a priority. As such, Ocean Diamond is the first ship in polar travel to be certified carbon neutral. To reduce impact on the polar environment, a maximum of 100 passengers are allowed landfall at any one site at any given time.

Embark on an epic expedition to the Antarctic Circle. Flying over the Drake Passage to King George Island, you’ll board the Ocean Adventurer and spend a full week voyaging the Antarctic seas, passing by icebergs and whales and venturing to penguin rookeries and frozen landscapes.

Cruising Antarctica in Style: Silver Explorer Ushuaia to Ushuaia via the Falklands

Join the world’s most illustrious explorers as you set foot on the white continent and embark on 18 exceptional days of excitement. Revel in the photograph opportunities as you become acquainted with the beauty of the Falkland Islands. Encounter penguins, watch for seals, dolphins, and whales, and spot seabirds flying overhead on this spectacular adventure.

Explore rarely visited South Georgia Island while also stepping foot on the 7th Continent. Photograph massive albatross and pintado petrel as they swoop and soar around the ship. Antarctica awaits, with its geographic contradictions and overwhelming enormity. Antarctica will surprise and delight, and never disappoint.