Middle-earth Unveiled: The Lord of the Rings: The Fellowship of the Ring Filming Locations

This December marks the 20th anniversary of the release of Peter Jackson’s The Lord of the Rings: The Fellowship of the Ring. It premiered in London on December 10, 2001 and hit theatres worldwide on December 19, 2021. To mark the occasion, we thought we’d showcase all the spots in New Zealand where you can see locations from this fantasy classic.

To say that Peter Jackson transformed the way the world sees New Zealand would be understatement. It had always been one of the most beautiful nations in the world, but people who had never visited or seen photographs of it before finally took notice of its natural beauty when The Fellowship of the Ring came out. For much of the world, New Zealand became Middle-earth, a place of almost magical grandeur. And the wonderful thing is that it was real and ready for them to visit.

While New Zealand hasn’t reopened its borders yet, we still think it’s a good time to showcase the ways you can explore Middle-earth for yourself on a future vacation. Peter Jackson and his fellow filmmakers used the natural locations across the islands to bring a marvelous fantasy world to life. But what exact locations did they film the movie at? Let’s find out.

All three of The Lord of the Rings movies were filmed entirely in New Zealand. Many real locations were augmented by CGI, while massive sets were built both in studios and on location to create environments such as the interiors of Rivendell, Isengard, and the Mines of Moria.

Where was The Fellowship of the Ring filmed on the North Island?

Wellington is the home of Weta Workshop 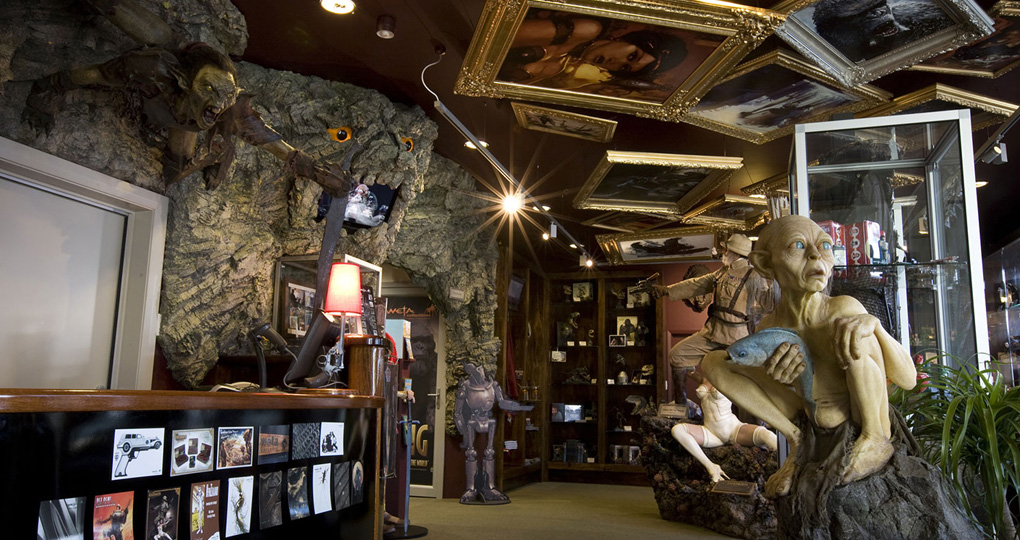 The centre of much of the production was Weta Workshop and Weta Digital in the capital, Wellington, where craftspeople and digital animators created props, costumes, and digital special effects for the movies. You can easily visit Weta Workshop on a trip to Wellington and stop by the Weta Cave, which showcases props and designs from the movies. Weta Cave also gives you a view into the actual Weta Workshop where filmmakers continue to work on movies such as the new Avatar films. A visit to Weta Cave is included on The Lord of the Rings day tour in Wellington.

Wellington is also the Shire, Isengard, and Rivendell

Wellington is also where you’ll find Mount Victoria, used for scenes in the Hobbiton Woods, such as when the hobbits hide from the Ringwraiths. Harcourt Park was used for the gardens of Isengard before Saruman destroyed the trees to build his war industry. Kaitoke Regional Park was also used to depict Rivendell, where the elf lord Elfrond lives and where Frodo recovers from his wound. You’ll even find a stone gate there today, which marks the entrance to Rivendell. 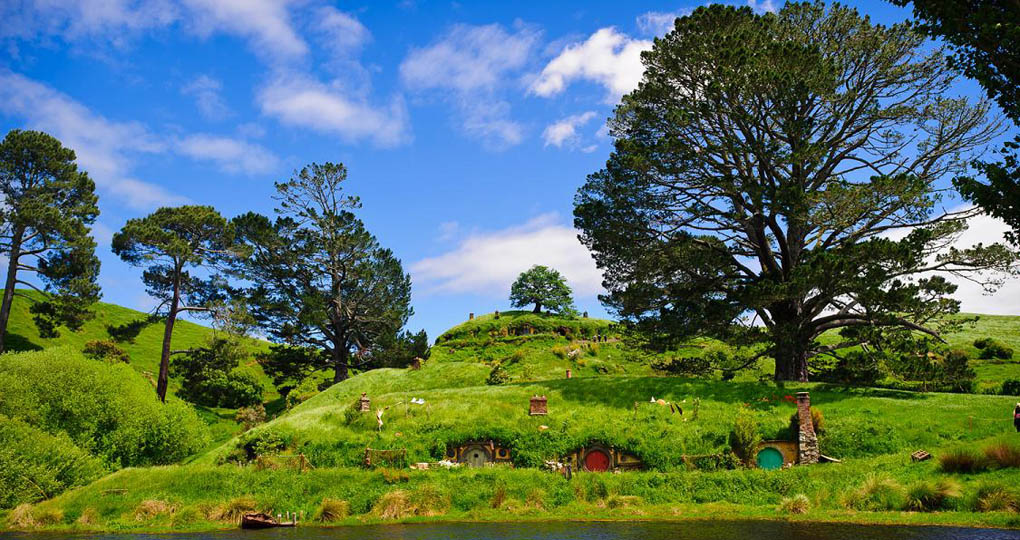 Outside of Wellington, the most prominent shooting location was the Hobbiton Movie Set in Matamata. The filmmakers first constructed the whole of Hobbiton, including Frodo’s home Bag End, during the production of the trilogy, but took it apart after shooting. It was rebuilt for The Hobbit trilogy and has remained there to this day as a popular tourist attraction. You can visit Bag End, see the Party Tree for Bilbo’s 111th birthday party, and visit the Green Dragon Inn for a pint. Half a day spent at the Hobbiton Movie Set is a highlight of Goway’s The Lord of the Rings Self Drive vacation, which is featured right below. You can also include it as a day tour on a trip to the North Island.

Where was The Fellowship of the Ring filmed on the South Island? 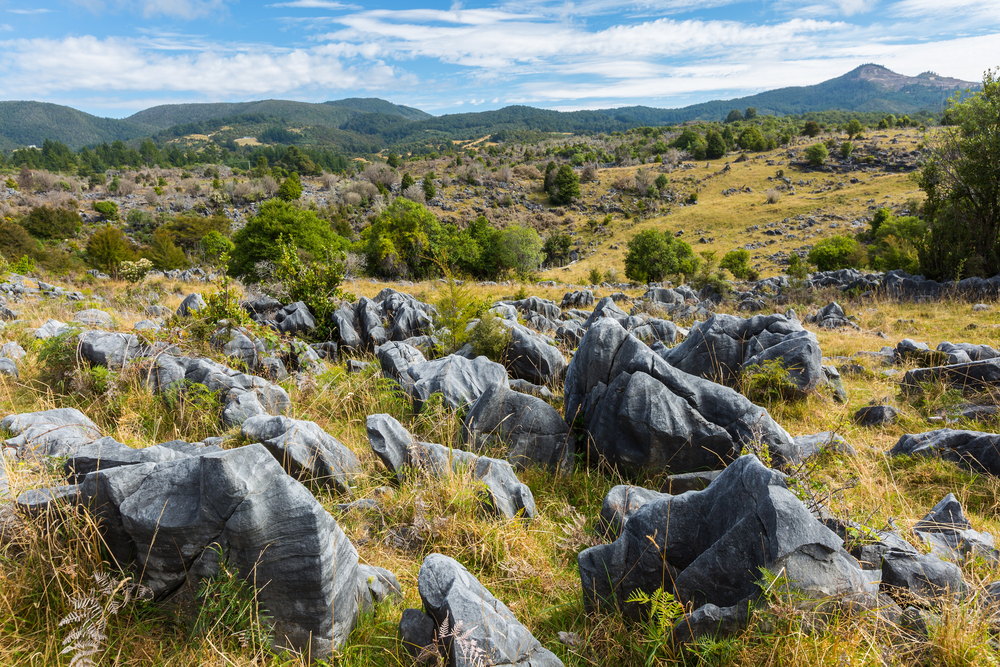 On the South Island, if you head west from Nelson, you’ll reach Takaka Hill, a range of hills with scrubland and rocky outcrops. The range was used for the area of Chetwood Forest, which is located to the east of Bree and the area where Aragon leads the hobbits on the way to Rivendell while trying to flee the Ringwraiths.

To the south of Takaka, you’ll reach Mount Owen, a beautiful mountain with deep fissures and sparse grassland. It was used for Dimrill Dale, the rocky stretches of foothills between the Misty Mountains and the forest of Lothlorien. It’s where the Fellowship mourns the loss of Gandalf during his fight with the Balrog. A bit to the northwest, you’ll also find Mount Olympus, which is the mountain range where the Fellowship hides from Saruman’s crows on their way to the Misty Mountains.

The Woods near Paradise are Lothlorien 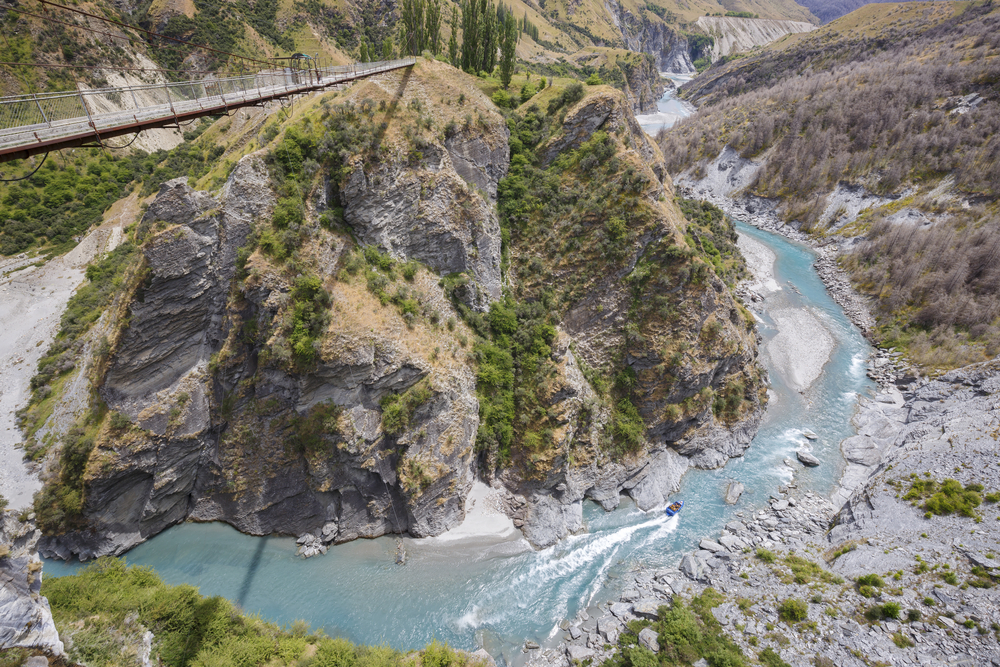 Further south on the island, around Queenstown, you’ll find the town of Paradise. The nearby forest was used for the woods of Lothlorien, where the Fellowship meets with Galadriel and the high elves. Not far from Paradise, you’ll find Skippers Canyon, which was used as the fjord near Rivendell where Arwen protects Frodo from the Ringwraiths, who are swept up in a tidal wave.

The Woods near Closeburn are Amon Hen

If you stay in the Queenstown area and head along the banks of Lake Wakatipu, you’ll reach the small town of Closeburn. The nearby woods on the lake were used as Amon Hen, where the final scenes of The Fellowship of the Ring take place. It’s where Saruman’s Uruk Hai kidnap Merry and Pippin and kill Boromir, and where Frodo and Sam flee the rest of the Fellowship.

Waiau River is the River Anduin

Finally, in the southwest of the island, you’ll find the Waiau River. This river was used as the River Anduin, which the Fellowship rides down when they leave Lothlorien and reach Amon Hen.

There are many other filming locations that aren’t listed here, but these are the core ones outside of studio sets and digital backlots. If you head to New Zealand in the future, you’ll have the opportunity to explore a bit of Middle-earth in the midst of experiencing one of the most beautiful nations on Earth.