Nothing says ‘Welcome to Australia’ like your first glimpse of the Sydney Harbour Bridge. Stretching over the water with its enormous steel arch, ‘the coathanger,’ looms above the white sails of Sydney Opera House. And on Sunday, March 5, 2023, its traffic will stop for three hours as 50,000 members of the LGBTQIA+ community don their brightest colours to participate in Australia’s biggest-ever Pride March. Rarely is Sydney Harbour Bridge ever closed for a public march, and this historic event will be its first-ever closure for an LGBTQIA+ event.

It's all part of Sydney WorldPride 2023!

FIRST CLASS l SMALL PRIVATE GROUP l SYDNEY WORLDPRIDE: Join in the first week of celebrations as Sydney welcomes the world's LGBTQIA+ community… and anyone looking to have a fun, pride-filled time at WorldPride 2023.

Why WorldPride 2023 is heading Downunder

When we think of LGBTQIA+ Australia, we think of Sydney’s Oxford Street. We think of hilarious foul-mouthed drag queens, decadent dance parties, the likes of Kylie Minogue, George Michael and Cher performing at Sydney Mardi Gras, and of course, the glitz, glamour and controversy of the world’s biggest nighttime LGBTQIA+ parade.

Maybe the question should be… why did it take so long for WorldPride to head Downunder?

Sydney’s come a long way since its first Gay and Lesbian Mardi Gras in 1978, when 53 marchers were arrested and beaten by police, only to have their names and occupations published in the Sydney Morning Herald. A fierce public campaign saw those charges dismissed, clearing the way for a peaceful parade of 3,000 people a year later. That same community spirit coordinated what is today recognized as one of the world’s most progressive and effective responses to the AIDS epidemic.

By 1994, the year Bernadette, Mitzi, and Felicia lit up cinema screens in The Adventures of Priscilla Queen of the Desert, Sydney Mardi Gras was the world’s ultimate gay celebration, the annual centrepiece of a year-round party calendar focused on Oxford Street. Long known as Sydney’s gay mile, Oxford Street was now lined with bars, clubs, cafes, restaurants, music and clothing stores, Australia’s oldest gay bookshop, and other LGBTQIA+ focused businesses. By the time the Sydney Olympics arrived in 2000 (where a gay Australian would break three world swimming records), it felt like anything was possible for LGBTQIA+ folk in the harbour city.

In 2022, Oxford Street now looks not unlike some of its legendary drag divas. A few more wrinkles underline a glitz and glam that’s survived its share of ups and downs, holding on against aggressive development like so many gaybourhoods worldwide. The crowd has changed too. More openly trans and non-binary faces populate a street once famous for the “Gay and Lesbian Mardi Gras.” They clamour for a good spot to watch some of the world’s top drag performers, alongside more supportive straight friends than ever, plus the butches, lipstick lesbians, twinks, bears, gym bunnies, club kids, and leatherfolk, who’ve always defined the Oxford Street scene. What hasn’t changed is the strip’s cheeky, irreverent vibe, its role in Australia’s fight for LGBTQIA+ equality, and its appetite for a good party.

But what does all that mean for visitors with just a few days to enjoy Australia’s LGBTQIA+ capital? 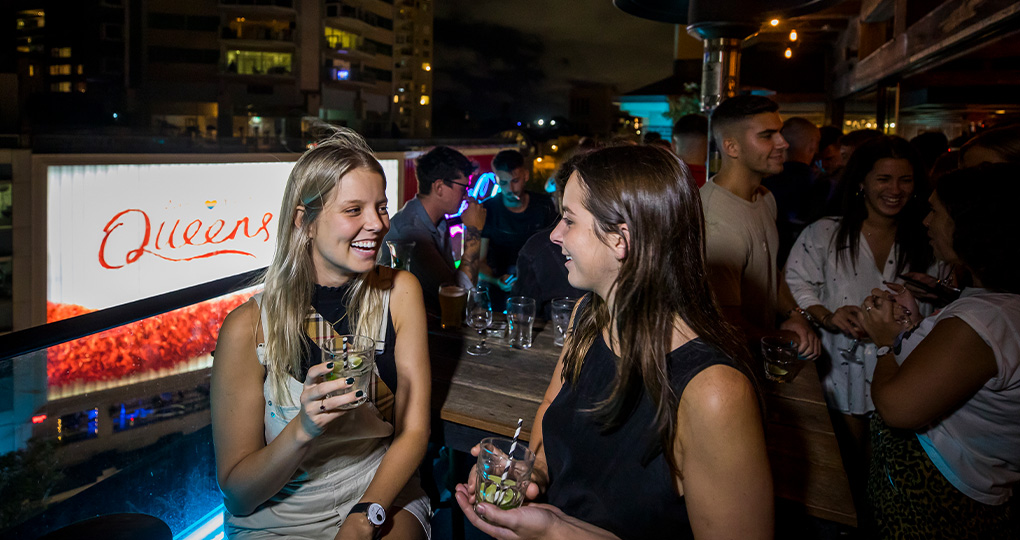 Top Things to Do in Sydney… and Nowhere Else!

While it’s tempting to spend your whole trip immersed in Sydney’s vibrant LGBTQIA+ culture, this unique city offers some once-in-a-lifetime experiences you won’t want to miss. How about joining those bridge climbers, for a start?

The Sydney Bridgeclimb offers the chance not just to climb an architectural icon, but to take in the ultimate view of the harbour city. You might even catch a cruise ship arriving or pulling out into Sydney Harbour if you're lucky. The climb departs from an office in Sydney’s historic Rocks district, where a historic walking tour is a must for getting to grips with Sydney’s past. We recommend doing an indigenous history walk too, to discover a Sydney that long predates white colonization. You can also catch a showcase of contemporary indigenous culture at the First Nations Gathering Space, taking place in the historic Carriageworks arts space from February 23 to 28.

Back at sea level, it’s time to go cruising. Umm… that’s harbour cruising (though you never know who you’ll meet at sea). Our favourite way to do it is on a leisurely guided lunch cruise. This lets you see the ins and outs of Sydney Harbour, including its most secluded coves and local beaches. With lunch served on board plus opportunities for swimming and snorkelling, this half-day cruise showcases why Sydney is the ultimate indoor/outdoor playground, best experienced on the water.

Beach body or not, ‘no carbs during Pride’ is so 2002! Sydney invites you to dine Asian hawker-style at Spice Alley or take things upscale at some of the chicest eateries in Surry Hills, a residential area just south of Oxford Street. For a spectacular backdrop to lunch or dinner, book a table at Opera Kitchen. There’s no diva behaviour here, just delicious food and incredible views of Sydney Harbour under the sails of Sydney Opera House. There’s no better way to finish up a tour of Australia’s ultimate architectural icon. 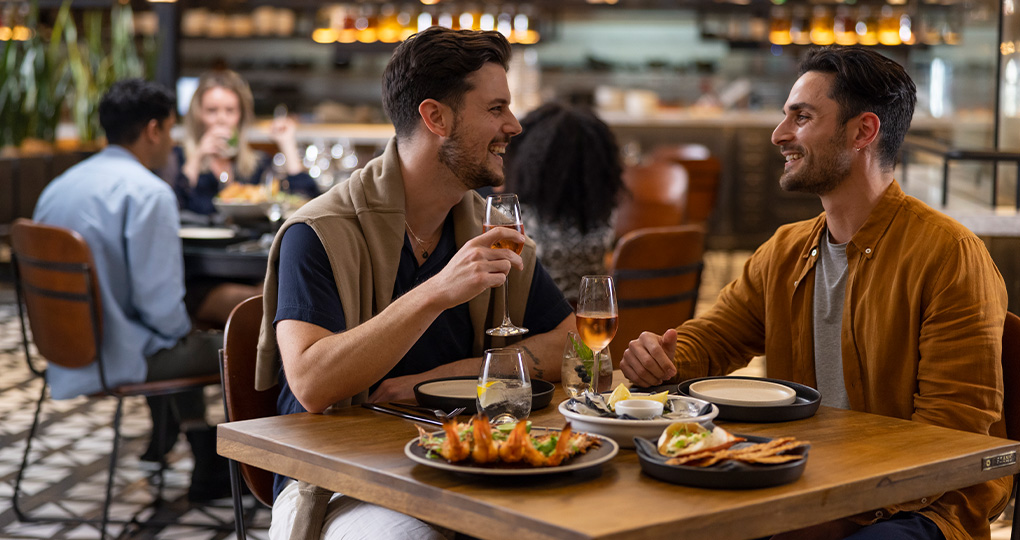 Sydney’s gay dance party scene didn’t earn a global reputation for nothing. Defying gentrification, its LGBTQIA+ community still knows how to light up a dance floor, with something to suit every taste. While the official Mardi Gras Party in Sydney’s Entertainment Quarter is legendary, the Domain Dance Party might be your pick if you prefer an open-air party under the Sydney skyline at dusk.

A large grassed area surrounded by historic buildings and the Sydney Botanical Gardens, The Domain is also the venue for Sydney WorldPride’s opening concert, Live and Proud, hosted by Australian Idol winner Casey Donovan and drag superstar Courtney Act and headlined by Australia's favourite pop princess, Kylie Minogue. The concert's official ticket allocation is now exhausted, but those who book with Goway by November 15 will have access to a special allocation of tickets exclusive to our Globetrotters.  Rounding out the Domain’s events will be Rainbow Republic, a dance party for the young and young at heart that marks the official close of Sydney WorldPride 2023.

There are more specialized parties throughout the festival too. On March 3, Sydney Town Hall will transform for Ultra Violet, a dance party just for LGBTQIA+ women. If that’s not you, consider heading to Enmore Theatre for queer comedy gala Mardi Gras Laugh Out Proud instead.

One of WorldPride’s most anticipated events is the Bondi Beach Party, which will turn Sydney’s favourite strip of sand into the city’s hottest outdoor club for seven magical hours on Saturday, March 4. Again, the official ticket allocation to this event is exhausted (Sydney does love its icons!) but once again, Goway has secured a special allocation exclusively for our group travellers to join the party! If you’d rather see beautiful bodies tear up the runway than the dance floor, take in the gorgeous fashions and haute couture looks of Mardi Gras Sissy Ball. Leave your reading glasses at home and prepare for 10s, 10s, and 10s across the board. 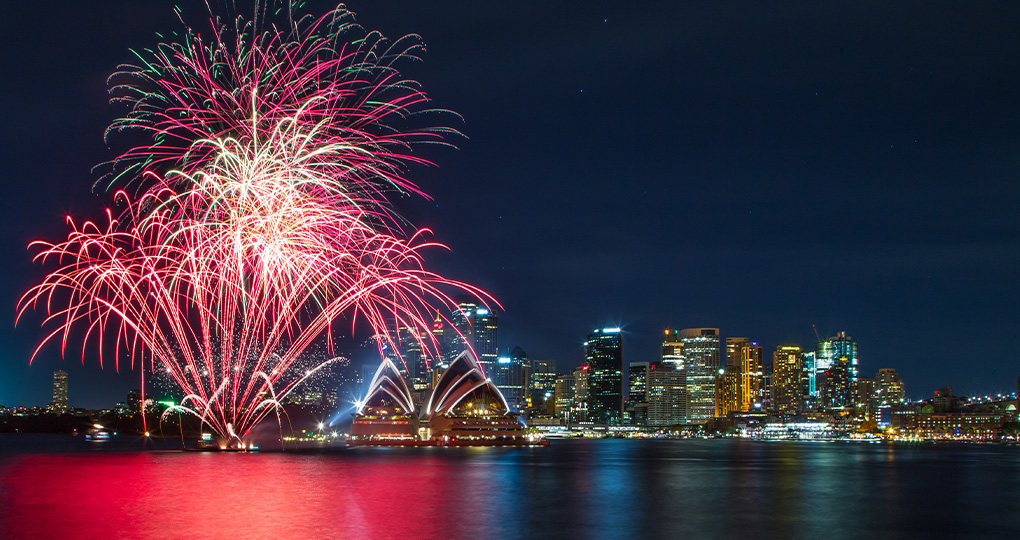 While Sydney Mardi Gras is an annual event, WorldPride will see a historic first. The Sydney Harbour Bridge will close from 7am to 10am for a 50,000-strong pride march. Since space is limited, budding participants must apply in advance for 1 or 2 tickets, with winners drawn by ballot. Not since the March for Reconciliation in 2000 has the bridge been closed for an event of this kind, so this is a chance to be part of Sydney history in the making. 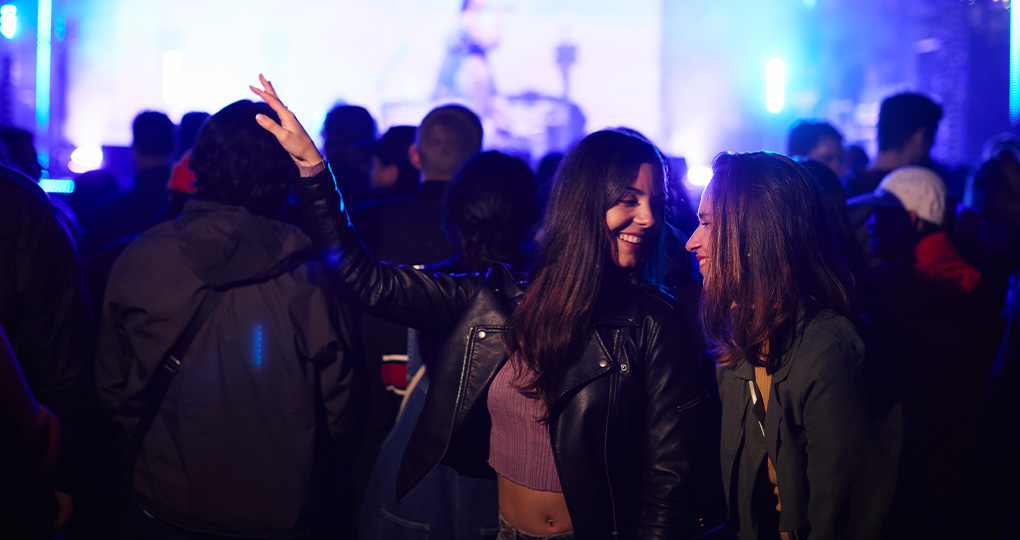 Oxford Street is the main artery of gay Sydney, with LGBTQIA+ businesses concentrated between Riley Street and just beyond Taylor Square. It’s here you’ll find most of Sydney’s LGBTQIA+ nightlife including fixtures such as the Oxford, Columbian, and Stonewall Hotels. Kinselas and The Beresford offer a more relaxed, community vibe, while Palms packs in a crowd with retro hits every weekend. A relative newcomer, The Eagle Sydney offers pop-up events for the kink and fetish crowd. Universal Sydney keeps things queer in the shell of the once infamous Midnight Shift bar, while trendy ARQ remains Sydney’s biggest LGBTQIA+ dance space.

If you’re not into the bar scene, don’t fret! There’s plenty to keep Oxford Street alive during the day, particularly during Mardi Gras when locals and tourists come out to shop, socialize, and play. For WorldPride 2023, sections of Crown and Riley Streets, which run off the main strip, will be closed to traffic for nine days from February 24. They’ll host pop-up stalls, daily performances, and public spaces to rub shoulders with the locals. On Oxford Street proper, local institutions including clothing store Daily Male, The Bookshop Darlinghurst, and drag emporium House of Priscilla keep the strip’s queer vibe going year-round. 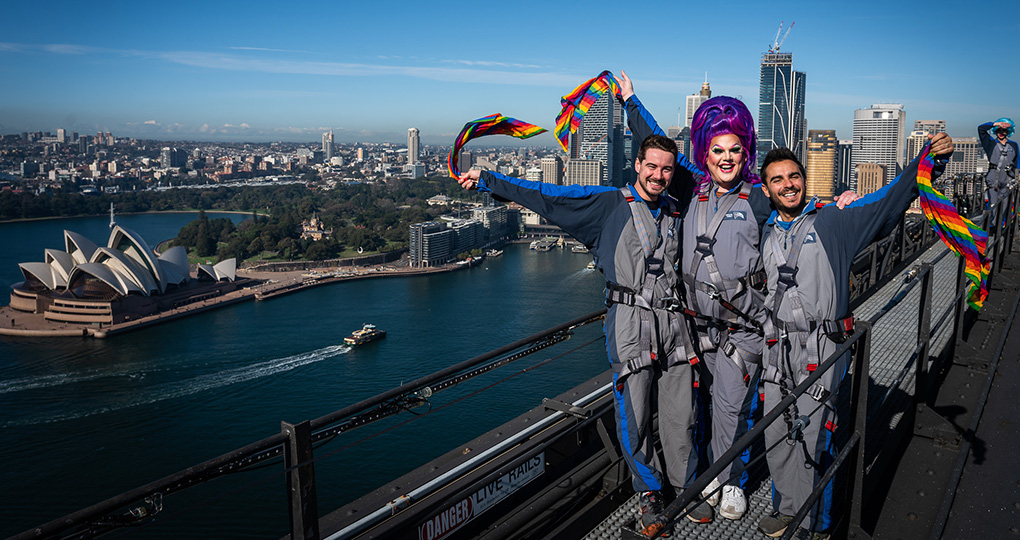 Not at all! Think of WorldPride 2023 as ‘mega Mardi Gras,’ with arts programs beginning on February 17 and running alongside the annual festival. All the usual Mardi Gras events will still take place, including the family-friendly, community-focused Fair Day in Victoria Park on February 19, and the famous Mardi Gras Parade from 6pm on Saturday, February 25.

Local tip? This isn’t your typical daytime Pride parade. Arrive early and scope out a good spot well before the parade starts. Crowds start to form in prime spots a couple of hours ahead of time, and WorldPride crowds are expected to be bigger than ever. The best viewing is on Oxford Street, between Taylor Square and Crown Street. It’s also the busiest and most crowded section, so be kind to yourself and to others so everyone has a great, safe time. 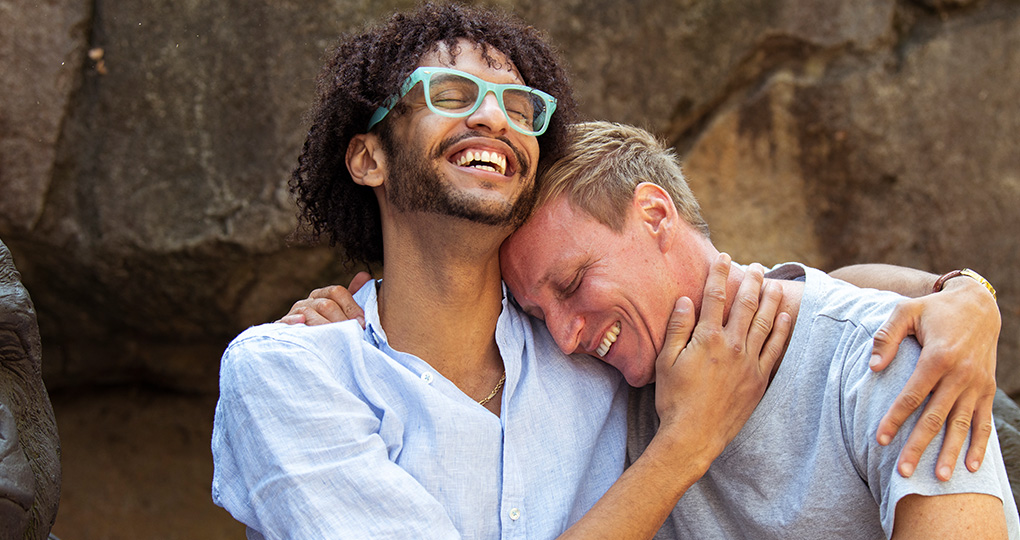 Which Sydney WorldPride 2023 Goway Travel Group is For Me?

As a Sydney WorldPride-approved travel provider, Goway is proud to offer two exclusive group packages to WorldPride 2023. Inquire now to make sure you don't miss out!

FIRST CLASS l SMALL PRIVATE GROUP l SYDNEY WORLDPRIDE: Join in the first week of celebrations as Sydney welcomes the world's LGBTQIA+ community… and anyone looking to have a fun, pride-filled time at WorldPride 2023.

FIRST CLASS l SMALL PRIVATE GROUP l SYDNEY WORLDPRIDE: Join in the first week of celebrations as Sydney welcomes the LGBTQIA+ community ….and anyone looking to have a fun-filled time at WorldPride 2023. Then fly to Cairns to experience the Great Barrier Reef, and North Queensland's vibrant indigenous arts culture.