Indonesia is big, beautiful, and a cultural marvel. It’s massive in terms of landmass and population, startlingly diverse when it comes to nature and culture, and home to some of the world’s greatest wonders. It has so much to offer travellers who are looking for an unforgettable vacation.

If you’re thinking about planning a trip for 2023, you should put Indonesia near the top of your list. But before we break down some of the best ways to explore Indonesia, we thought we should share some basic facts about the nation.

And we have some ideas about how to explore it. The following are five unforgettable ways to explore Indonesia. Our suggestions include Bali, but go beyond this famous vacation paradise to include some of the other islands and natural highlights. It’s by no means exhaustive. Indonesia is so diverse and large, the vacation options here are nearly endless. But these are five surefire ways to have a memorable first or second trip to Indonesia.

What are five great things to do on an Indonesian vacation?

Hike a volcano to watch the sunrise or sunset 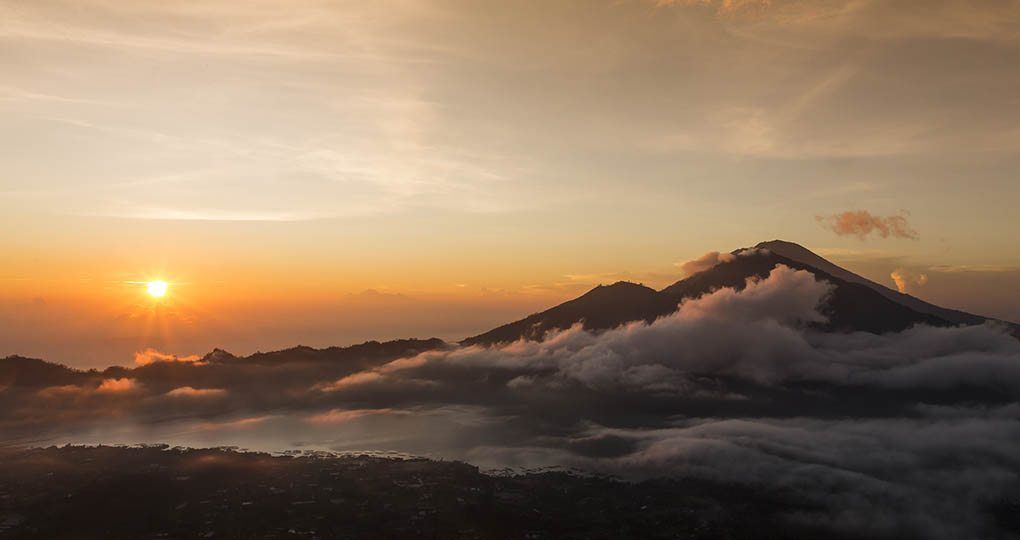 The beaches of Bali may dominate headlines or Instagram posts, but for our money, the volcanos are the heart of the Island of the Gods. Mount Batur sits in the island’s northeast and takes about two hours to hike. Hike at dawn to enjoy the views of the sun rising over the hills to the east and bathing the mountain in a warm glow. Mount Agung takes longer to hike, around four hours, thus making for a more ideal spot to hike in the afternoon to watch the sunset. It’s the highest point on the island, so you’ll enjoy the best views of the surrounding area. You can easily book a day trip to Batur or Agung from Ubud or even the southern beaches. And you can hike volcanoes off of Bali as well. For instance, on Java, you can explore the slopes of Mount Bromo, which takes only around 45 minutes to summit. The best way to hike it is to first pass through the Tengger Valley in Bromo Tengger Semeru National Park and to make your way to the volcano through the forest.

Bike through the rice terraces of Bali 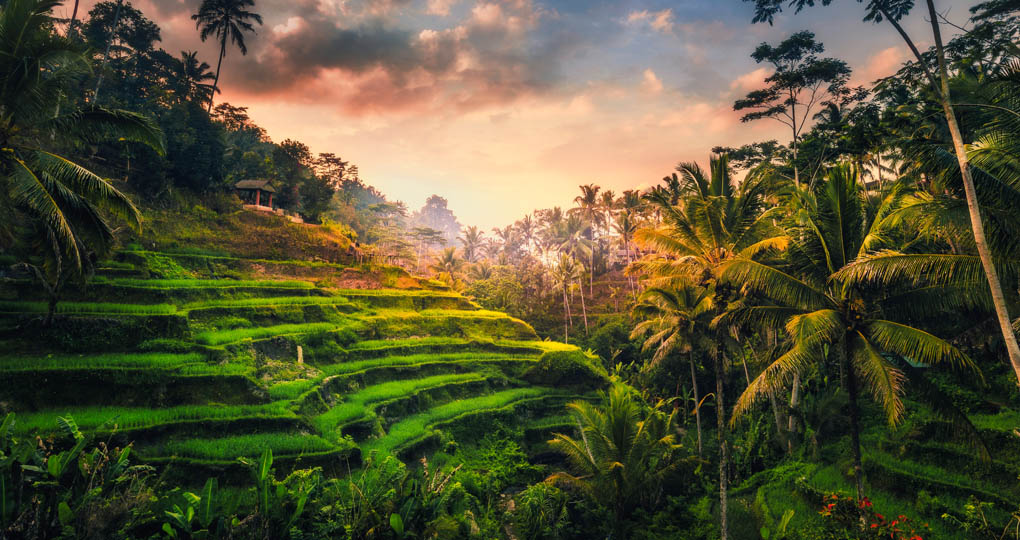 If you want to stay closer to sea level, a bike tour through the jungles of Bali is a great way to see the island’s temples, villages, and terracing rice paddies on a single itinerary. You don’t have to be a semi-pro cyclist to handle the routes and you’ll have lots of breaks to stop and take photos of farmers working in the fields or animals passing through the jungle. The rice paddies themselves are among the most beautiful in the world. The paddies are built on terraces up and down the hillside, transforming the natural landscape into a cascading ripple of shimmering water on green hills. You couldn’t ask for a more beautiful place to explore on a trip to Indonesia.

Go on a temple tour through history 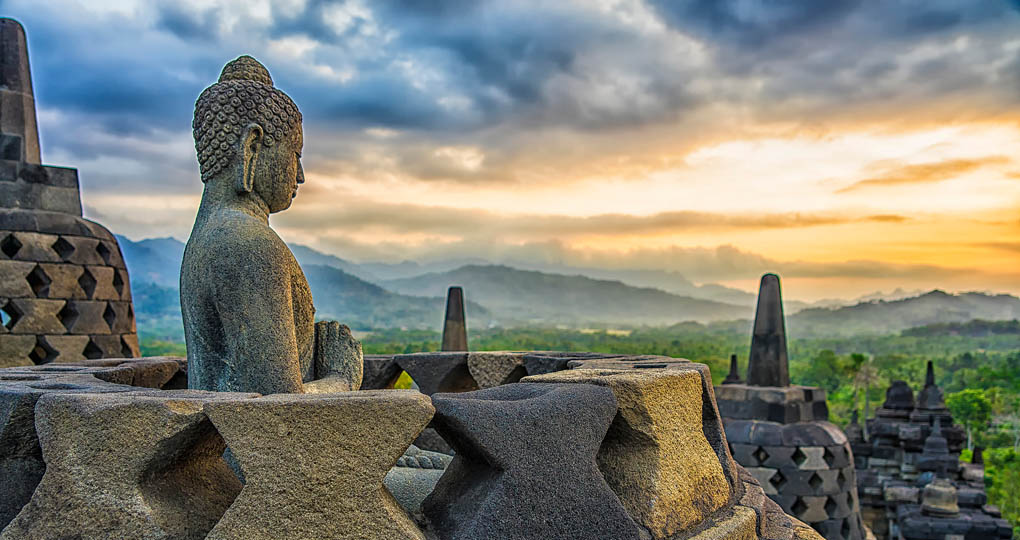 Indonesia is full of temples dating back thousands of years. Borobudur on Java is the most famous of the bunch. It’s the largest Buddhist temple in the world and renowned for its elaborate stacked platforms and statues. Not far to the east, you’ll find Prambanan, the most significant Hindu temple in the nation, which is famous for its elaborate carvings. Both are easily accessible from the city of Yogyakarta, the cultural centre of Java. However, you don’t have to leave Bali to explore temples. It has over 10,000 temples on the island, from Uluwatu Temple, with its famous ocean views on the southern tip of the island, to Ulun Danu, known for its 11-storey Meru tower (a pagoda-like structure) on Lake Bratan.

Feast on the national dishes 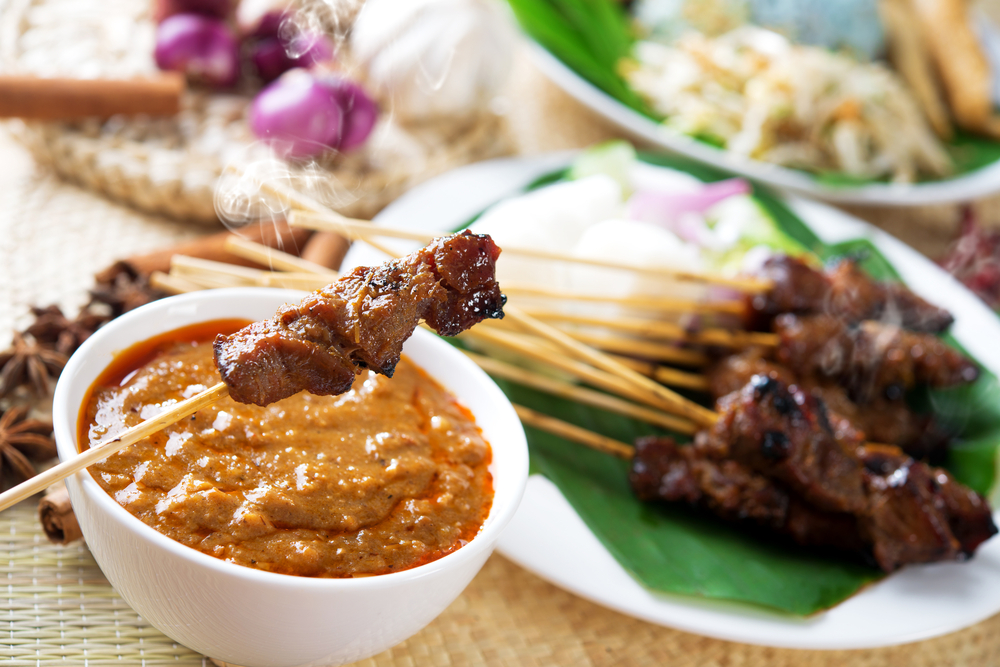 Indonesian food is incredible, and every island has its speciality. There’s no way to try every dish in every part of the nation, but you can guarantee a memorable visit if you try at least one (and preferably all five) of the five national dishes, which were chosen by the government in 2018. There is Soto, which is soup, whether made with a clear broth or coconut milk. Local meat and produce defines what ingredients you’ll find in soto. Beef Rendang is a spicy beef cooked in coconut milk that hails from West Sumatra. It’s known for its tenderness and for being dry, unlike curry. Nasi Goreng is fried rice, served with meat, veggies, and an egg. It’s a breakfast staple. You’ll find seasonal variations throughout the nation. Gado-Gado is a hearty salad of fresh veggies, tofu, tempeh (fermented soybean cakes), and peanut sauce. It’s a great vegetarian option when travelling. And of course, there’s Satay, which is grilled meat skewers served with peanut sauce. You’ll find Satay everywhere from the fanciest restaurants in the cities to the humblest stalls in remote villages. Combine Bali with some other islands, whether Lombok, Nusa Lembongan, or the Gili Islands, to sample the regional differences of these national dishes. 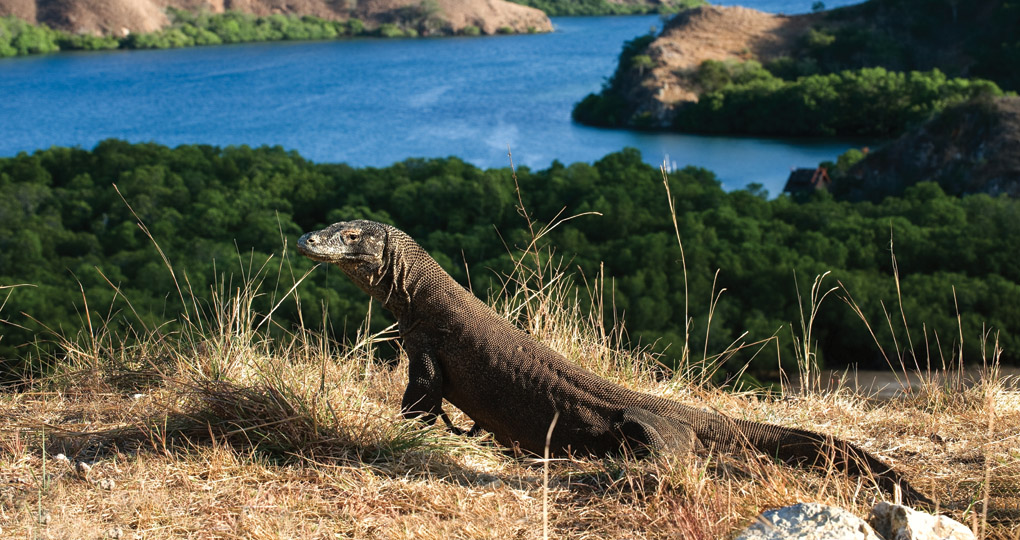 The Komodo dragon is the largest lizard in the world and one of the native wonders of Indonesia. You’ll only find them in the wild on the islands of Komodo National Park, specifically Komodo Island and Rinca Island. Book a nature cruise to spend a few days exploring the islands of Komodo National Park and head on wildlife excursions with expert guides, who’ll teach you about the lizards and let you get close while remaining safe. If you’re a nature lover or want a once-in-a-lifetime natural adventure, consider a Komodo nature cruise. You’ll never forget the sight of these 150lb lizards walking onto the sands of a pristine beach.

What are the best ways to explore Indonesia? 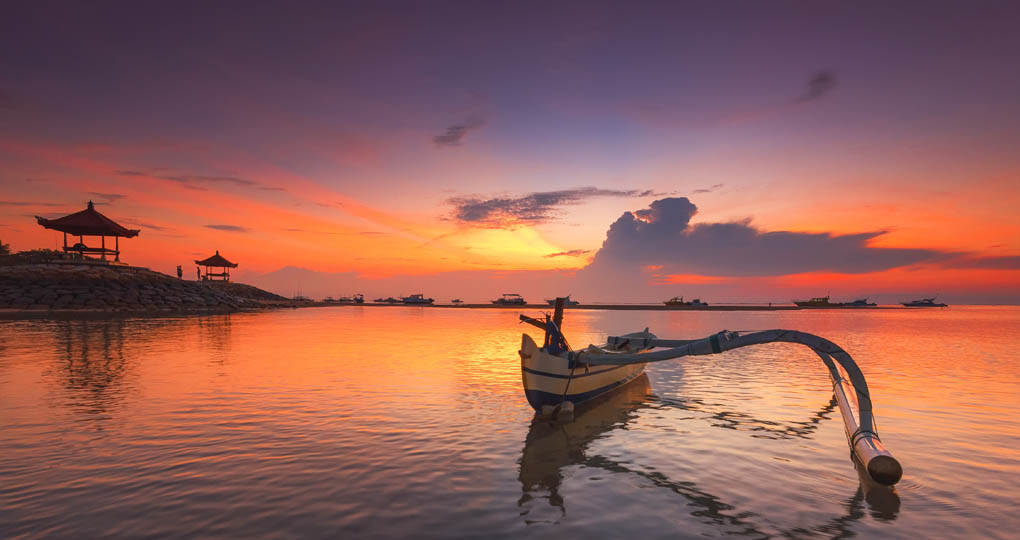 There are a variety of ways to explore Indonesia on a vacation, with most trips including some time on Bali. Hike, Bike & Beach Bali is an 8-day natural showcase of the beautiful island of Bali. It includes volcano hikes, bike tours, and trips to sacred temples, in addition to plenty of time at your resort. Classic Bali extends the trip to 11 days, splitting time between Nusa Dua on the southern beaches and Ubud in the central jungle. Best of Indonesia is a more extensive tour of the nation, which includes time on Bali as well as Java, where you’ll visit the temples of Borobudur and Prambanan, and a tour of Komodo National Park to see the dragons. Sailing Indonesia is a unique way to explore the nation and immerse yourself in its natural wonders. This 8-day cruise takes you on a round-trip cruise from Bali, during which you’ll explore Lombok, see Komodo Dragons, and enjoy time snorkelling the coral reefs off Banta Island.

You’ll find the rest of our vacations to Indonesia on our website. When you’re ready to start planning, get in touch with a Goway Destination Specialist.

This article was written in partnership with Indonesia Tourism.

DELUXE | PRIVATE-GUIDED: Escape to the picturesque island of Bali to stay in breathtaking luxury resorts in Ubud and Uluwatu. In addition to enjoying luxury comforts, you’ll explore the nature and culture of the island by climbing Batur Volcano, biking through rural villages and alongside rice paddies, and visiting sacred Uluwatu Temple.

DELUXE | PRIVATE-GUIDED: Escape to the island paradise of Bali to relax at the beach and explore the rice paddies and jungles of the interior. Split your time between the southern peninsula and Ubud, staying in deluxe resorts, swimming off pristine beaches, and visiting breathtaking temples on private tours.

FIRST-CLASS | PRIVATE-GUIDED: Discover the highlights of Indonesia. Start on the island of Bali, where you’ll have plenty of time to relax between Seminyak and Ubud. Then travel to Java to visit Borobudur and Prambanan, some of the largest temples in the world. Cap it all off with a journey to Komodo to see the dragons.