Experience the Outstanding on a Tunisia Vacation

Tunisia will certainly provide you with sun-drenched days on the beach but it will also allow you to satisfy your cultural desires with historical sites and desert experiences. It’s a wonderful combination to experience on a trip to Africa.

The Beaches of Tunisia

Tunisia is located on the North African coast of the Mediterranean and enjoys a similar climate to its counterparts to the north – the southern parts of Spain, France, etc. The following are some of the principal internationally-acclaimed resorts in Tunisia. What is remarkable about them is the added attractions beyond the beach for you to enjoy on your Tunisia vacation.

Hammamet is probably the best-known resort on Tunisia tours and is a popular destination for swimming and water sports such as water skiing, windsurfing, and jet skiing. The name Hammamet translates as "Bathing Place" – very appropriate. One claim to fame is that Sophia Loren, the Italian actress, has a house situated on the beach just outside the centre. There are numerous beaches to choose from. Many are private hotel beaches. With its many facilities, you can choose from a full range of accommodation to suit your budget. However, Hammamet offers a lot more than the beach. In the town, you will discover a maze of narrow and winding lanes in the town’s medina (typically a walled city within the city with narrow streets and old houses). This one is surrounded by an original 15th-century wall and contains some well-preserved traditional Tunisian architecture. On a stroll through the medina, you will find many shops and small markets selling embroidery, ceramics, leather goods, carpets, and much more. 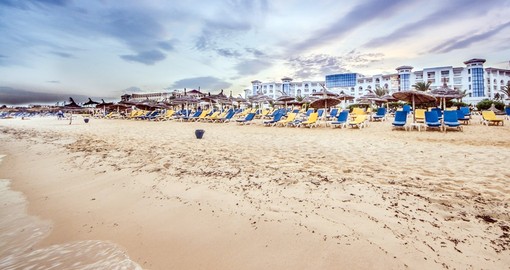 Just outside of Hammamet is Pupput, a Roman archaeological site consisting of aqueducts, cisterns and baths, and Nabeul, a colourful town known for its Friday crafts market. It is also famous for its ceramics, as the inhabitants have been potters since time immemorial. There is also an interesting archaeological museum. Another nearby place of interest is Kerkouane, thought to have been settled by the Phoenicians in the 6th century BC. A visit here is like travelling back in time with its ancient buildings and streets.

Djerba is an island just off the coast of Tunisia known as "the island of a thousand palm trees." It has an excellent stretch of beach containing soft white sand, clear turquoise sea, and a good choice of hotels, many of which have their own private beach. It is a fascinating place consisting of Muslim, Berber (a nomadic people), and Jewish communities peacefully coexisting on the island as they have done for centuries. It is also home to Africa’s oldest synagogue. After enjoying the resort aspects of Djerba, you can visit Houmt Souk, the main market town on the island. Here the streets are lined with white-washed buildings with walls covered in bougainvillea. You can visit the medina with its cobblestone streets and shops selling merchandise such as leather goods, colourful textiles, local ceramics, silver goods, ornate jewellery, and antique Judaica offered by the many shops owned by Jewish Djerban families. In the evening, watch the dramatic sunset – something to behold. 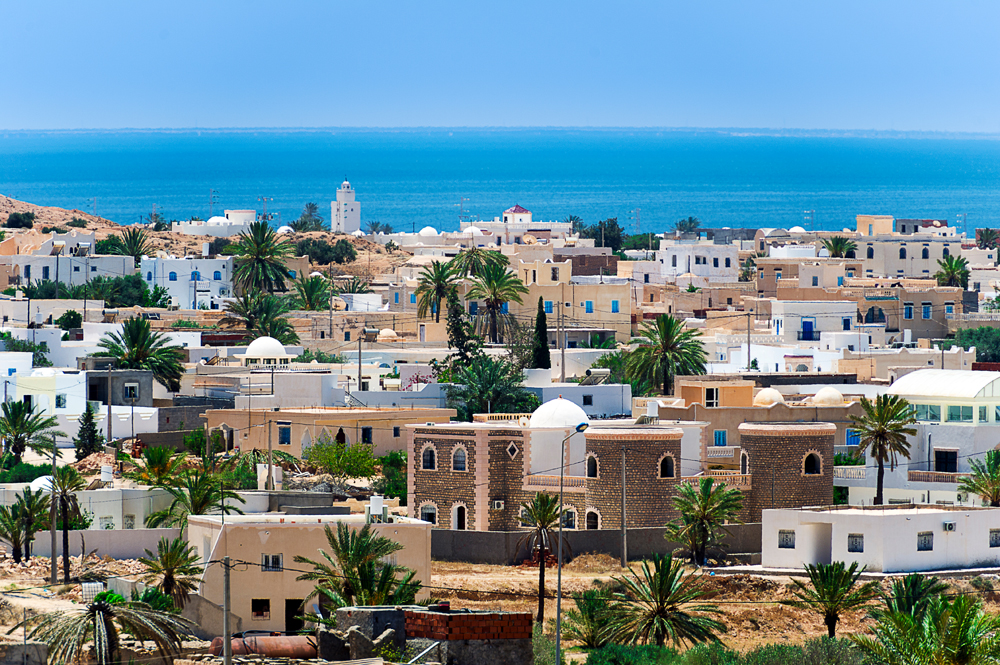 Sousse is a major beach resort offering excellent beaches, a large selection of hotels, and a vibrant nightlife. The beach stretches for 10 kilometres/6 miles. Most of it is public with some private hotel beaches. It is one of the older cities in Tunisia with an authentic 9th-century AD medina - a UNESCO World Heritage site. Apart from the usual shopping opportunities, the medina also contains the impressive and vast Great Mosque, a good example of early Islamic architecture. Another major building in the medina is the 8th-century AD ribat (fortress). From the watchtower, you can have great views of the port and coastline. The Dar Essid in Sousse is a house converted into a museum. Formerly, it was the home of a 19th-century official and contains interesting artefacts. The Sousse Archaeological Museum is a place to view the excellent collection of mosaics as well as vases, masks, statues, and burial tombs. One more attraction is the Catacombs of Sousse believed to be, at one time, the hiding place for Christians during the time of persecution under the Romans. The tunnels stretch for more than 5 kilometres/3 miles and contain around 15,000 graves. 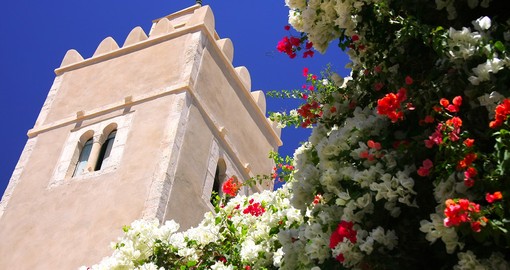 Tunisia has been blessed with many interesting archaeological sites spread out over the country worth seeing. Here are a few of the more important ones to visit while on a Tunisia vacation.

Carthage is an ancient archaeological site located in a suburb just outside the capital city of Tunis. Its history dates back to the time of the Phoenicians, an ancient civilization which built cities on the coastline of the Mediterranean from 1550 BC to 300 BC. Unfortunately, the original city was destroyed by the Romans - but was rebuilt by them - and this is what you see today. It was the Roman Empire’s major city in North Africa at the time. The amphitheatre here was rebuilt by Julius Caesar and is used today for summer festivals. You should allow plenty of time to do justice to Carthage on Tunisia tours.

FIRST-CLASS | PRIVATE-GUIDED: The tour allows you to combine the splendour of the Mediterranean with many excursions offering a unique glimpse into the traditional lifestyle and culture of the Tunisian people.

The ancient amphitheatre of El Jem is the most impressive Roman monument in Africa. It can be reached easily from Sousse. Hammamet is a bit further away. It was the scene of gladiator displays, chariot races, and lions versus humans, often cruel and bloody. It seated around 35,000 spectators. Only the Colosseum in Rome could seat more. The nearby archaeological museum showcases mosaics depicting Roman life and art.

About one hour outside of Tunis is one of the most exceptional Roman sites in Africa and a UNESCO World Heritage site. It is set on a hillside and the outstanding restored amphitheatre, whose 19 tiers could accommodate an audience of 3500, was built in 168 AD. The ruins of the Vandal Church of Victoria are at Dougga, a church built in the early 5th century AD using stone taken from the surrounding temples. The Temple of Saturn here was completed in 195 AD, but today only six columns remain. There are many other sites which are available to explore including a forum and Roman baths.

The Sahara Desert is situated in the southern part of Tunisia and is the largest desert in the world occupying roughly 30% of the African continent. So how do you go about experiencing it on a Tunisia vacation? There are several tours which start from Hammamet, Djerba, and Sousse. You will head to the gateway town of Douz which is an oasis in the desert. You can choose from a half-day into the Sahara or multi-day tours including overnight camping. There are two forms of transportation available on these - one is by jeep and the other by camel. If you choose to travel by camel, a 2 day, overnight tour would be best. What would you see and do on an overnight tour? You would experience the large sand dunes, the amazing night sky full of immeasurable stars, and you would spot Arabian gazelles, falcons, and oryx. You would sleep in a tent and enjoy a meal prepared by a Bedouin chef. 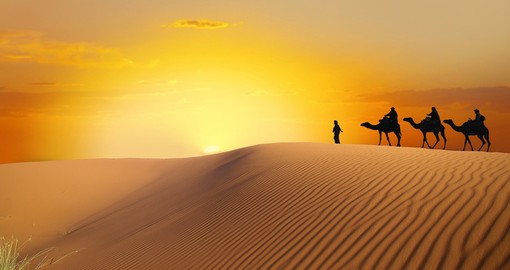 It is not a bad idea to tack on a few days in Tunis, especially if you are wishing to visit Carthage. You can enjoy one of the most impressive medieval medinas in North Africa. With its sprawling maze of ancient streets and alleyways, it is one of Tunisia's outstanding treasures. It contains numerous souks selling everything from shoes to shisha pipes, as well as cafes and back streets full of artisans at work. The Bardo in Tunis is Tunisia’s top museum, with its excellent collection of Roman mosaics depicting a fascinating portrait of ancient North African life. Nearby Sidi Bou Said is one of the prettiest places in the country to visit on Tunisia tours, with its blue and white houses, cobblestone streets, and distinctive architecture - a mix of Ottoman and Spanish styles. It sits on top of a steep cliff overlooking the Mediterranean and offers dramatic views. In the past, it has attracted residents such as Paul Klee, the painter, Andre Gide, the author, and Edith Sitwell, the English poet.

When you are a Goway Globetrotter you become part of a special fraternity of travellers about whom we care very much. Our company philosophy is simple – we want you to be more than satisfied with our services.

Looking to travel to Tunisia? Get a a Free Quote by filling out the form below:

Why You Shouldn't Wait to Book Your Post-Pandemic Vacation

It’s easy to look at the unpredictability of the past year and think that planning anything ahead is a fool’s errand. But we’re here to tell you that booking ahead is essential when thinking about a post-pandemic vacation.