Greece is a member of the European Union and uses the Euro as its form of currency. It is important to always have some cash money when travelling to the Greek Islands as you may encounter small shops and cafes that ask for cash. There will be ATMs on all of the islands, but the smaller islands may only have one on the whole island.

All school children in Greece start learning English in the third grade, so most Greeks will be able to speak or understand English. The official language is Greek. It is appreciated if you try to speak a little Greek while you are there.

It is very typical of the Mediterranean. Greece has warm and dry summers with mild and rainy winters.

Greece has something for every kind of traveller, from romantic couples to foodies to families to history buffs. 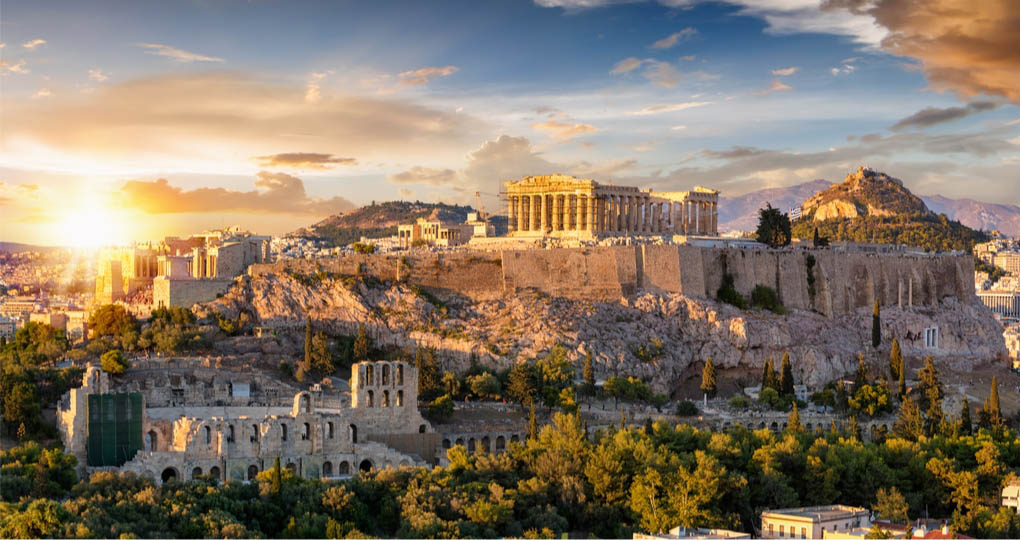 In the United States, most major cities have direct flights to Greece. There are some that have non-stop flights, such as Philadelphia, Chicago, and New York City JFK and EWR.

Most cities offer connecting flights to Greece via Europe or you can fly to Toronto, which offers seasonal non-stop service. 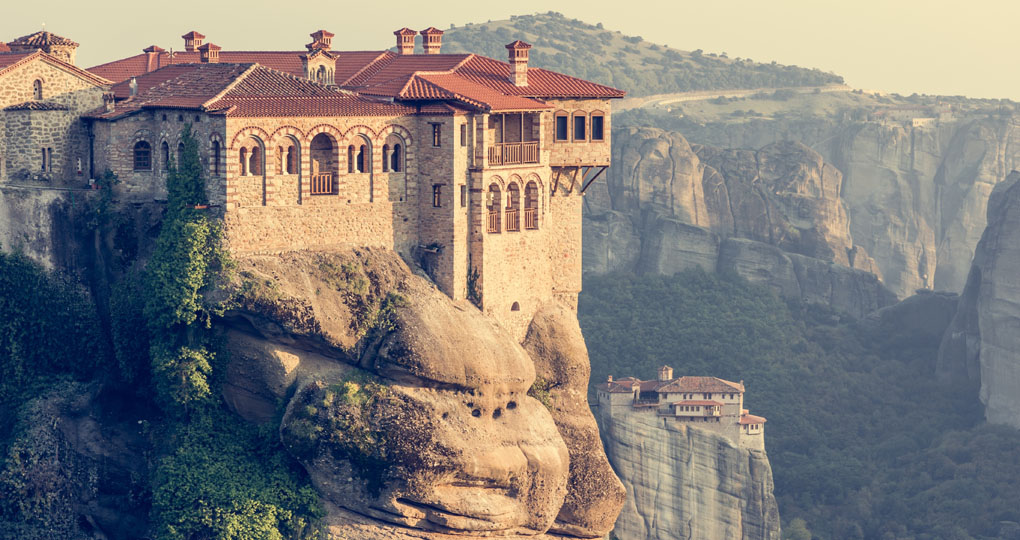 Athens is the capital of Greece. Its history goes back over 3,000 years. It is one of the oldest inhabited cities in Europe and the birthplace of democracy and the Olympics. It’s also the main transportation hub of Greece. It is a city of different contrasts from ancient Athens with the Parthenon, Acropolis, and Statue of Zeus to modern Athens with cafes, shops, hotels, spas and clubs.

The Acropolis, or the Sacred Rock, was a fortress and military base all the way back in the neolithic period. Over time, it changed into a religious centre and was dedicated to the worship of the goddess Athena. During the classical period the Parthenon was built here. Persians destroyed the Acropolis in 480BC. It was rebuilt by Pericles, who was the founder of Athenian democracy, and has kept this form into the current day.

Delphi was a religious sanctuary and had the most famous oracle of ancient Greece. It was sacred to the god Apollo. Delphi is located on Mt. Parnassus near Corinth. It is also a UNESCO World Heritage Site.

Some of the most photographed sites in Greece, the Meteora Monasteries are located on hard to access rock towers. At one time, there were as many as 24 monasteries built on the rocks. Today, there are six active monasteries.

Rhodes is one of the Dodecanese Islands and has been inhabited since prehistoric times. It is the fourth biggest Greek Island and as it is close to both Asia and Europe, it has a long history of being claimed by countries in both areas. Ultimately, it took until 1945 for Rhodes to be recognized as Greek again.

Crete is the largest island in Greece, with an extensive history with many civilizations contributing to its present culture. You’ll get a taste for the cultural diversity by exploring Crete, seeing Venetian fortresses, Byzantine structures, and Minoan frescoes, among other cultural artifacts. There are also many beaches, good hiking trails, and plenty of history.

Santorini is one of the most popular islands in Greece. It’s home to spectacular views, all types of lodging options, lots of things to do, and great food. It is part of the Cyclades Islands and was created after a huge eruption that occurred in the 16th century BC. It’s best defined by its white buildings with blue tops, volcanic caldera, and turquoise waters.

Mykonos is a top destination in Greece and a part of the Cyclades Islands. There are luxurious hotels, long golden beaches, and an energetic nightlife on the island. The atmosphere, extravagance, and beaches will keep you coming back.

Other Highlights of Greece Off the Beaten Path 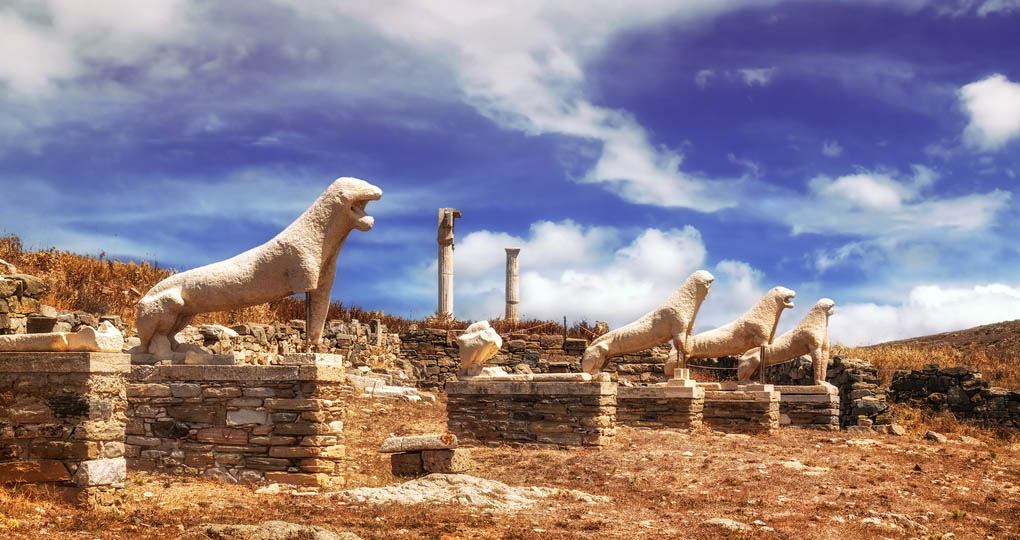 Located on the island of Crete, this is a must visit for any nature lovers. It is 16km-long, but at parts it is only four metres wide. The gorge is near Chania on the north coast in White Mountains National Park.

The Corinth Canal is 6,343m-long and joins the Gulf of Corinth in the Ionian Sea and the Saronic Gulf on the Aegean Sea. The canal was started by Emperor Nero, who was interrupted during the building and returned back to Rome. It was completed in 1893. The Greek Government ran out of funds to widen the canal, so only smaller boats can go through it. It is 8m deep and 24.6m wide. There are plans to widen it in the future.

Much of the ABBA musical Mamma Mia! was filmed here, taking advantage of the beautiful beaches, ancient history, and scenic villages on the island.

A small island near Mykonos, Delos is one of Greece’s most important archaeology sites. There are many excavations on the island, dating back many thousands of years. It is said that the Greek god Apollo and his twin sister Artemis were born here. The island is listed as a UNESCO World Heritage Site.

It’s likely you’ve seen images of Navagio (Shipwreck Beach) all over Instagram. The beach is on the island of Zakynthos, a beautiful place with picturesque villages, exotic beaches and landscapes, and lots of nightlife. The island’s history combines Greek and Venetian influences.

Top Activities and Experiences in Greece 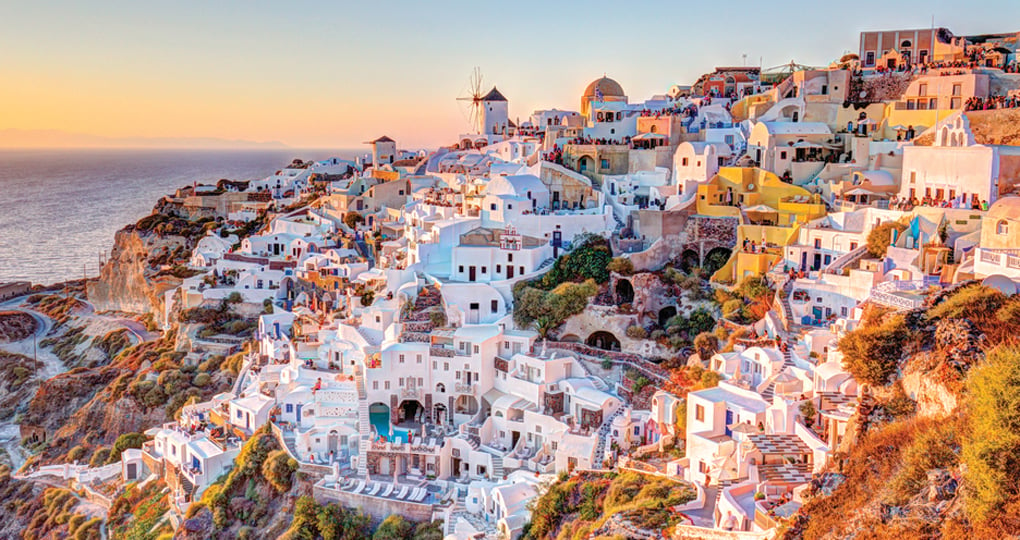 Knossos Palace is located on Crete near Heraklion. It was built by the Minoans and has been inhabited since the 5th century AD. In Greek myth, it’s the site of the famous Labyrinth and its Minotaur guardian who was killed by the hero Theseus. The ruins and the frescoes are amazing and shouldnt be missed.

Akrotiri is one of the most significant archaeology sites on Santorini. It is located in between the village of Akrotiri and Red Beach. Formed as a Minoan settlement around 4,500BC, the site has been destroyed and rebuilt a few times due to earthquakes and a volcanic eruption, which covered the town in ash and lava, similar to Pompeii, until it was rediscovered in the second half of the 19th century.

Experience the wines and food of Greece by going on a food tour. This is a perfect way to sample Greece’s bounties, savor authentic Greek dishes, and drink delicious and sweet Greek wines in beautiful settings.

Excursion to Hydra, Poros and Aegina

Go sailing on a full day cruise and see the islands of Hydra, Poros and Aegina, which are close to Athens, and offer plenty of opportunities for sightseeing, shopping and swimming.

Experience the best sunset in the Greek Islands on a dinner cruise in Oia. You will get to snorkel and swim on Santorini’s red and white sand beaches, have a Greek BBQ, and see the famous Santorini sunset from the water. 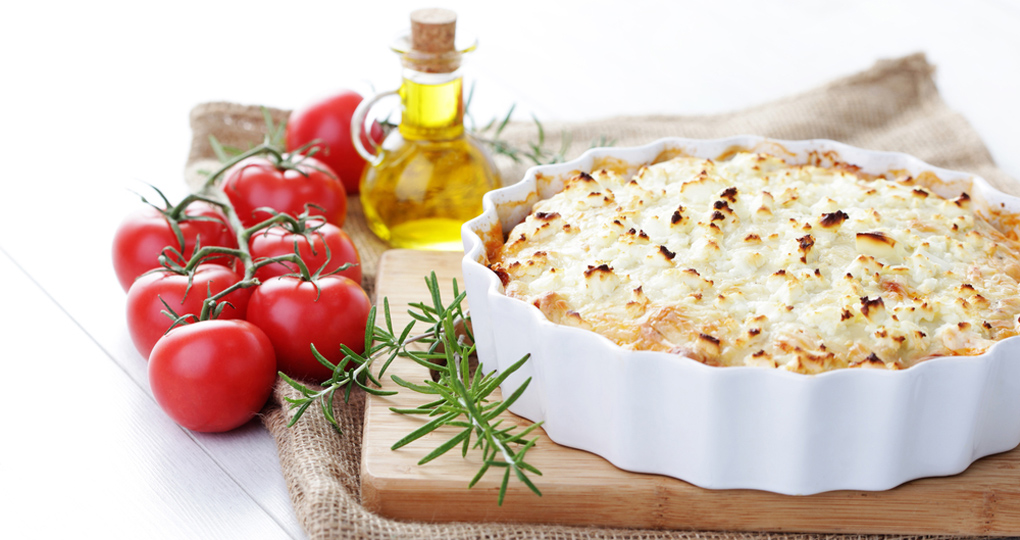 Souvlaki is one of the most popular Greek foods. It is made with marinated pieces of meat grilled on a skewer, sometimes along with onion, tomato, and peppers. It is served in a pita with tzatziki. You can find it everywhere in Greece.

Spanakopita is a spinach pie stuffed with spinach, feta, olive oil, onions, and eggs. The handmade crust is what makes this dish truly special. Depending on which area of Greece you visit you’ll find several variations of spanakopita.

Moussaka is a comfort food for Greeks and extremely popular. It is a multilayered dish that includes eggplant, potatoes, cheese, tomatoes, ground beef, and bechamel sauce baked in an oven.

Dolmadakia or stuffed grape leaves are a traditional Greek food made with beef or lamb and rice stuffing. It is a must have for an appetizer in Greece. 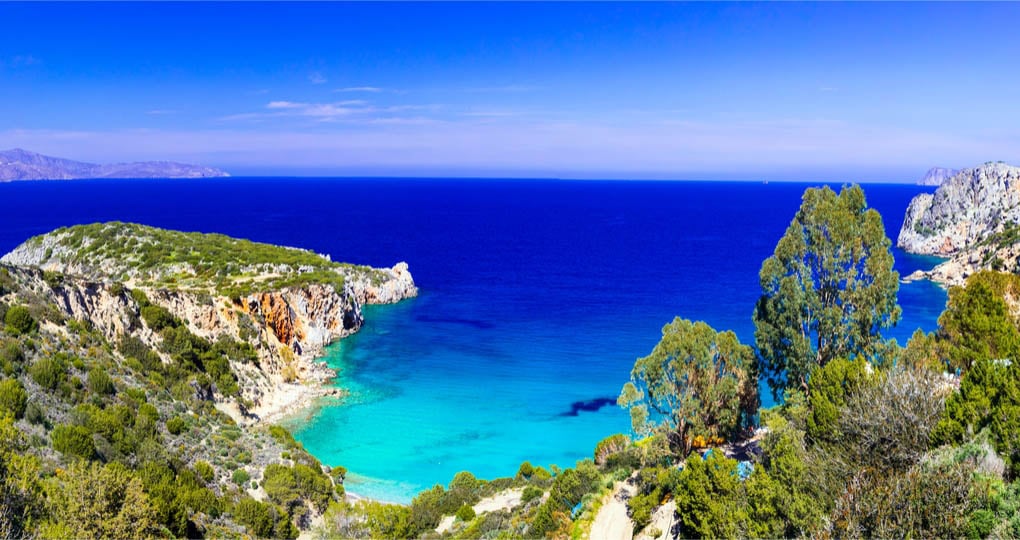 Conserve water at the hotels you stay in by reusing towels and turning off the air conditioning and the lights when you leave your room. Buy a reusable water bottle that can be collapsed so you can pack it in a corner of your suitcase. Take a reusable shopping bag with you. Many fold down to a very small size and are easy to travel with you. Use reef-friendly sunscreen and eco-friendly bug spray. Be sure not to take shells or sand from the beaches, as it is illegal to remove shells, sand, or sea animals from many beaches in Greece.

Since Greece is so centralized it is a convenient jumping off spot for travel to many areas of the world. You can easily combine Greece with Italy or Croatia. Many people also go to Greece after visits to Paris or London.

Most Popular Itineraries for Greece

The Best of Greece itinerary includes Athens, Mykonos and Santorini. It comes with or without air and is customizable. Another popular itinerary is Greece Highlights. Goway offers several options with this itinerary and you can see over four different islands on it. This itinerary also includes some “off the beaten path” islands such as Ios and Naxos.

FIRST-CLASS | TAILOR-MADE: Take in Greece’s highlights as you explore the country’s ancient past and vibrant present. Tour the world-famous Acropolis in Athens, Greece’s ancient capital, before sampling the iconic nightlife of Mykonos and the rugged volcanic landscape of Santorini in the Cyclades.

DELUXE | PRIVATE-GUIDED: Get off the beaten track with this journey from Athens to the Greek Islands. This Greek vacation takes you to Athens to explore the Acropolis and its historical treasures before visiting Naxos, Ios, and Paros, lesser-known islands that offer plenty of opportunity to swim, hike, and enjoy the charms of pastoral Greek life.

FIRST-CLASS | TAILOR-MADE: Experience Greece’s ancient past and vibrant present on this exploration of Athens and the Greek Islands. Passing from Athens to Mykonos, Santorini, Crete, and Rhodes, you’ll explore ancient temples like the Parthenon, stroll along windswept cliffs, and experience the long and storied history of this great nation.