The Swiss Franc (CHF) is the official currency in Switzerland. Euros are accepted in many places, but not everywhere. Note that if you pay in Euro, you will get your change back in Swiss Francs, typically with an exchange rate that is not in your favour, so this is only convenient if you’re connecting to another destination through Switzerland. Otherwise, be sure to have Swiss Francs on hand. You can withdraw money at any ATM as they are nearly everywhere or as an alternative, you can pay by credit card (all major cards are accepted, although the safest choices are Visa and MasterCard).

Switzerland is a truly multilingual country, and recognizes four languages as national languages. Most of the population speak Swiss German, which is a special dialect that is no longer spoken in Germany or Austria. In the western part of the country, people mostly speak French, while in the south they speak Italian. Finally, in the southeast, many locals speak the Romansh language. However, Swiss people are raised to be multilingual, and the vast majority speak a range of languages including fluent English.

Switzerland is best enjoyed in the winter or the summer. From April to June and September to October, you can enjoy hiking, trekking, and scenic train rides without too many people around. July to August is considered high season, when you can enjoy hiking, trekking, biking, paragliding, and lots of different festivals. However, there are larger crowds and higher trip costs, generally speaking. If you are more into winter fun such as skiing, snowboarding, and Christmas markets, then you should definitely visit Switzerland between November and March.

The Swiss climate is extremely diverse and unstable, so always be ready for a surprise! Much of the country is mountainous, so in some areas winter never ends, even in summer months, which explains why Switzerland is such a popular destination for ski tourism (temperatures tend to average between -4°C/25°F and 7°C/45°F in year-round skiing regions). In the rest of the country, summer months are quite a contrast, with hot days and temperate evenings (during these months, temperatures typically hover between 18°C/64°F and 30°C/86°F).

Switzerland has something for everyone, but nature lovers are most at home in this beautiful country. It is important to note that travel to Switzerland is not exactly the most affordable, so be prepared to spend a bit more than on your average trip to Europe. With that in mind, Switzerland is often considered an excellent location for upscale, luxurious vacations. 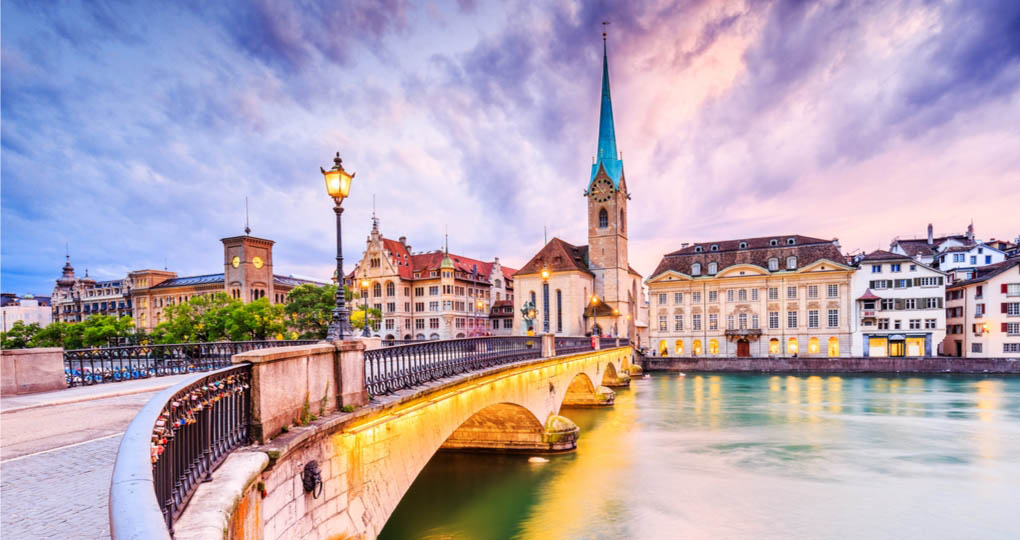 Conveniently located in the middle of Europe, Switzerland is a popular hub for travel to nearly all surrounding countries. The busiest international airports are Zurich, Geneva, and Basel.

In the United States, direct flights to Switzerland are available from the east coast (New York and Washington, for example), while travellers from the central United States and west coast will likely need one or two connections en route to Switzerland.

In Canada, most direct routes to Switzerland travel through Vancouver or Toronto. Guests departing from other cities will likely need to connect through Toronto. 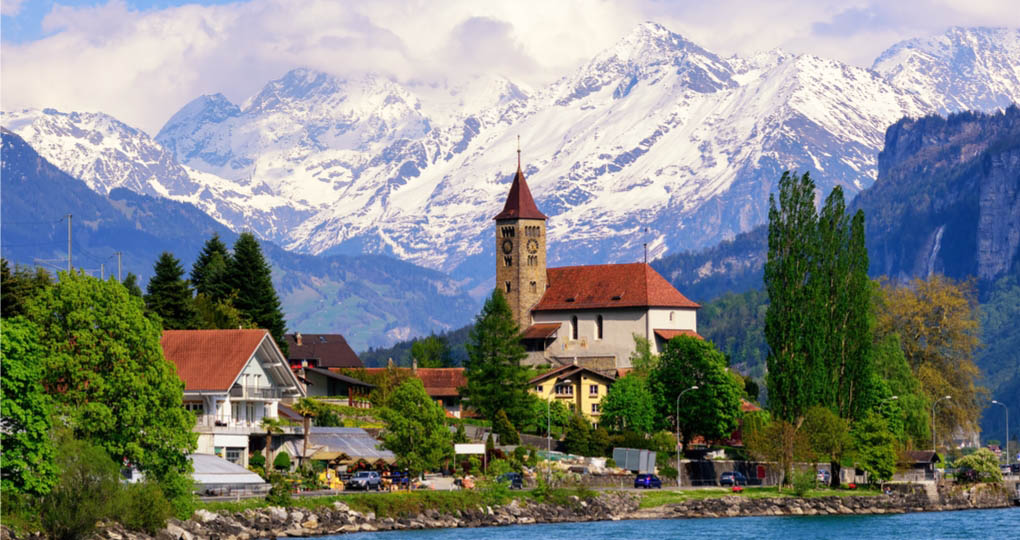 A small and lively town situated between two lakes, its gorgeous location and excellent rail connections make it a must-visit destination. It also helps that it’s located close to Jungfraujoch, a mountain saddle known as “The Top of Europe.”

One of the most famous skiing areas in the world, famous for its FIS-quality slopes, endless skiing possibilities, cosmopolitan visitors, and its glitzy atmosphere. Whether visiting for the world-class slopes, exclusive shopping, or invigorating spas, St. Moritz is a posh, idyllic spot to unwind.

The largest lake in Switzerland and one of the largest freshwater lakes in Europe, Lake Geneva offers events, colours, tastes, and wonders for each and every season. For guests embarking on self-drive programs, many routes track along the scenic shores of Lake Geneva when traversing southern portions of the country.

Other Highlights of Switzerland Off the Beaten Path 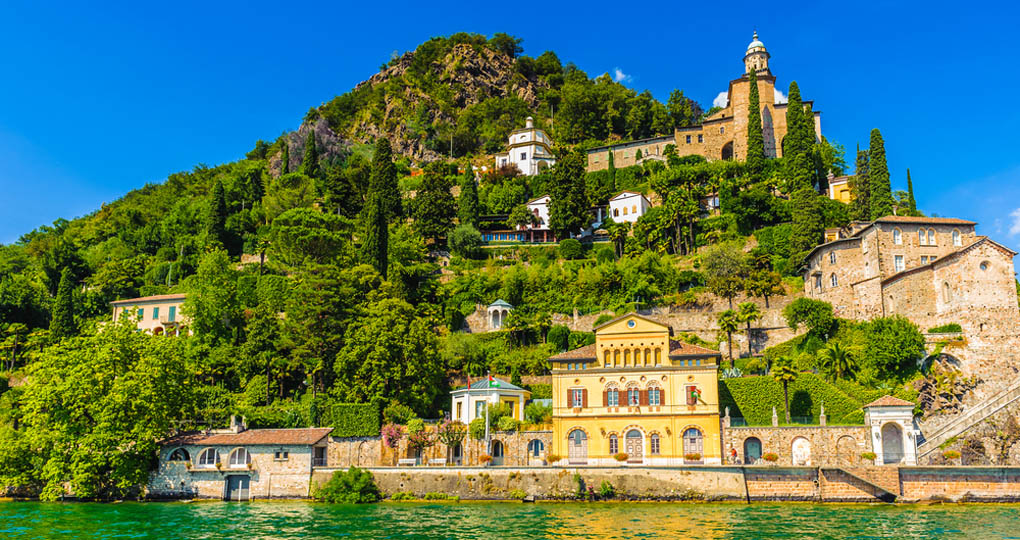 A mountain village seemingly out of a storybook and a postcard example of Swiss luxury and wellness, Gstaad is one of the most popular holiday destinations for the rich and famous in all of Switzerland.

Shared by Switzerland and Italy and infused with a mix of Swiss sophistication and Italian passion, Lugano is the perfect place to enjoy outdoor sports, explore beautiful villages, take in gorgeous views, and dine on delicious food.

Europe's most powerful waterfall, with a width of 150m/492ft and a height of 23m/75.5ft. Several hundred cubic meters of water cascade over the edge each second. To add to the spectacle, in the middle of the waterfall stands a mighty rock that has withstood the torrent for thousands of years.

There is a legend saying that St. Beatus, a monk who chose this place to be his sanctuary, found someone already living there. It was a horrible dragon, and legend has it that St. Beatus had to fight and throw the dragon down the cliff and into Lake Thun. Myth or not, this cave with its underground waterfalls and lakes is definitely worth visiting.

Top Activities and Experiences in Switzerland 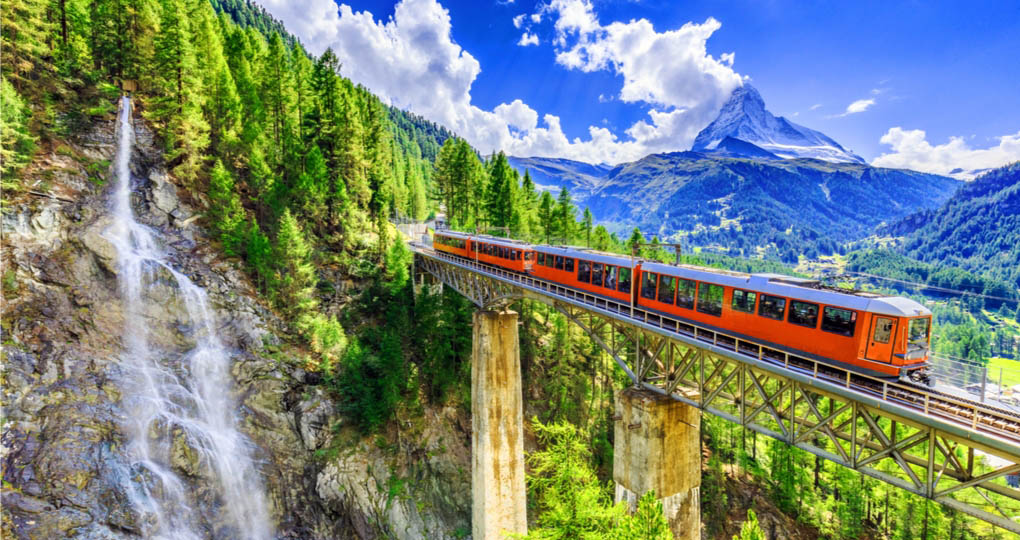 Enjoy a relaxing train ride through the Swiss Alps while taking in amazing views. Ride a topless sky-train or by way of cable cars. Some of the best places to ride the trains are in Graubunden, Andermatt, and around the beautiful Lake Brienz.

There are plenty of traditional Swiss Christmas markets around the country where you can join the atmosphere of sparkling lights, cheerful music, and bright colours. Whichever market you choose, you will not be disappointed! Basel is probably the best choice. On top of serving as host to a lovely market in its own town square, the city lets you visit three Christmas markets in three days, due to its proximity to both France and Germany.

Craft your own Chocolate

You cannot leave Switzerland without making your own chocolate. Bring that inner child out and choose from different chocolate types and extras to add in, and take home the best Swiss souvenir! 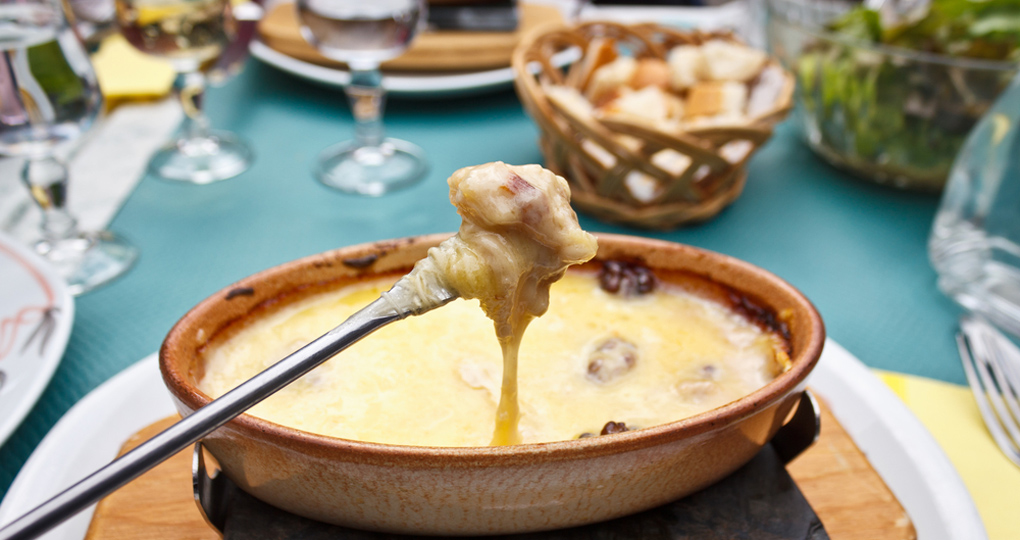 The famous fondue originates in Swiss mountains areas, and traditionally is made with two different kinds of cheese, depending on the region of Switzerland you are in. It’s a must-try food during your trip because there is nothing better than dunking rustic country bread into melted cheese infused with wine and garlic.

Local cheese grilled slowly over a fire, with layer-by-melted-layer sliced off over boiled potatoes, pickles, onions, or meat. Raclette is not just a meal, it is tradition to enjoy with your friends, as you can have a nice chat while waiting for the delicious cheese to melt.

One of Switzerland’s iconic national dishes, traditionally eaten for breakfast, Rosti consists of thinly grated potatoes pan-fried until crisp and golden and served plain or topped with salty bacon, a fried egg, and melted raclette cheese. 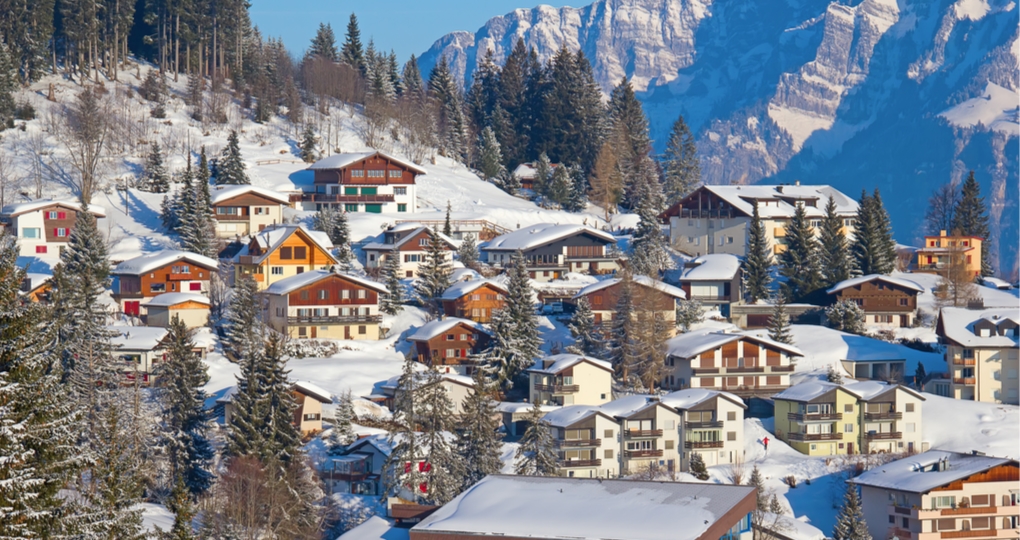 Switzerland widely promotes bicycle tours and wildlife experiences with measures aimed at reducing the carbon footprint and saving the country’s natural beauty. The railway network weaves across the country (and to all neighboring countries), and this is the most environmentally conscious way to travel through Switzerland.

Due to its central location, Switzerland allows you to combine your trip with many different European destinations, whether you choose France, Germany, Austria, Italy or any other country. Some of the most popular itineraries combine Switzerland and Northern Italy, going along Lake Lugano, Major Lake, and Milan, continuing to Venice or down to Southern Italy through Florence. In wintertime, you can tour some of the best Christmas markets and enjoy the magic on your trip from Zurich to Strasbourg and continuing to Frankfurt or Munich.

Most Popular Itineraries for Switzerland

Whether embarking on a self-drive program, a private-guided adventure, or a tailor-made program with local touring along the way, Goway has you covered. On the Grand Train Tour of Switzerland, travel across the country from the comfort of the scenic Swiss rail system. To learn local stories and visit places often missed, our privately guided Switzerland Deluxe Luxury Tour is just the fit. Alternatively, if the open road beckons, consider setting out on our E-Grand Tour of Switzerland, where you’ll be behind the wheel of a Tesla Model 3.

FIRST-CLASS | RAIL: You're invited to ride the rails of Switzerland and bask in the country's unparalleled Alpine splendor. Travelling across the whole country, you’ll journey along some of the world’s most famous train routes and enjoy spectacular views of the Matterhorn and Lake Geneva, among many others.

DELUXE | PRIVATE-GUIDED: This first class luxury Switzerland tour takes you to many of the country’s most beloved and picturesque destinations, including St Moritz, Bern, and Zermatt, home to the iconic Matterhorn, all while enjoying some of the worlds most scenic rail routes.

E- Grand Tour of Switzerland in a Tesla Model 3

DELUXE | SELF-DRIVE: Starting and ending in Zurich, you're invited to explore medieval old towns, summit mountains, cruise across picturesque alpine lakes, and experience the breathtaking beauty of the Swiss countryside as you weave your way along winding roads in a Tesla Model 3.