The official currency of Guyana is the Guyanese Dollar (GYD). US dollars can be used in Georgetown for larger transactions like hotels and restaurants, but having Guyanese dollars on hand is necessary for smaller transactions like taxis, purchasing snacks, and visiting rural areas. Credit cards are accepted in most larger resorts, hotels, and some restaurants. Most ATMs in Guyana accept foreign bank cards, but you can also withdraw cash from local banks during banking hours. Cambios or currency exchange houses are a good option to exchange cash and are easily found through Georgetown and some tourist areas.

Guyana’s official language is English. It’s the only English-speaking country in South America. There are also many other languages spoken throughout the country, including Indigenosu dialects, Creole, Caribbean Hindustani (a dialect of Hindu), and Urdu.

Typically, the best time to visit Guyana is during the dry season (February to April and August to October) when the weather is hot and there’s less chance of rain. The wet season (December to January and May to June) experiences higher humidity due to intense rainstorms, with flooding in some areas that may potentially cause travel interruptions.

Guyana's climate is equatorial: hot but pleasant for most of the year with very little variance in temperatures. Temperatures vary more depending on regions being interior or coastal as the heat is tempered by the sea breezes, making the coast slightly cooler. It also has two seasons, dry and wet, with two wet seasons from May to June and December to January. Georgetown averages 2,300mm of rainfall per year, with increased humidity but slightly-cooler temperatures providing some relief from summer's intense heat. The temperature on the coast ranges from 20°C/68°F with an average temperature of 26.8°C/80.2°F. In the interior the temperature ranges between 18.3°C–39.4°C/64.9°–102.9°F, with an average of 28.3°C/82.9°F.

The travel industry in Guyana is not as developed as in some of its neighbouring countries, but it still has plenty to offer with its immense natural wealth making it ideal for the more adventurous traveller. Nature lovers, wildlife enthusiasts, and photographers will enjoy the vast jungle of the Iwokrama rainforest, history buffs will love exploring the capital and its colonial charm, and culture lovers can enjoy visiting Indigenous Amerindian communities like the Surama Village. 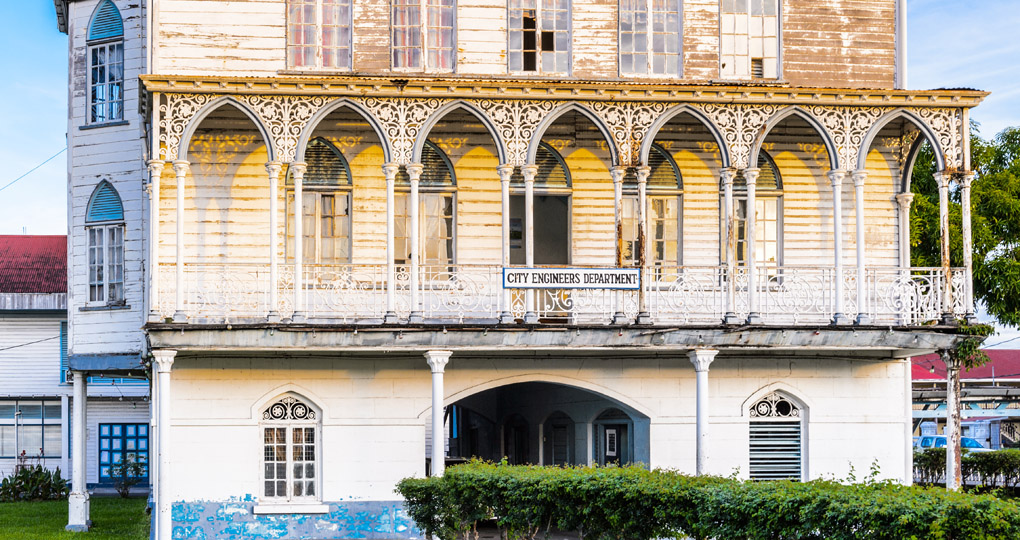 From Canada, Caribbean Airlines is the only airline that has a direct flight from Toronto to Georgetown. For the rest of Canada, the majority of flights have at least one stopover in Toronto or American cities such as Miami or New York. Georgetown is the capital of Guyana, situated on the mouth of the Demerara River. It is a city full of cultural history and diversity and plenty of beauty with tree-lined avenues, lily-covered canals, and 18th and 19th-century colonial architecture, including the Gothic St. George Anglican Church. Georgetown has plenty to see and do, such as exploring the Stabroek Market, taking a walk along the bustling Regent Street, or checking out the Umana Yana, the conical palm thatched hut. In the west of town, you’ll find some of Georgetown’s most distinct architecture such as the Walter Roth Museum of Anthropology, the National Library, the State House, the National Museum of Guyana, and the Parliament Building that dates back to 1829.

Kaieteur Falls, located on the Potaro River, is considered the largest single drop waterfall in the world. It is twice the height of Victoria Falls in Africa and four times higher than Niagara Falls. It is situated within the Potaro-Siparuni area of Kaieteur National Park and in the center of Guyana’s rainforest. It has a free fall of 226m from the water source when it first reaches the rocks, but then it drops through a series of steep waterfalls that, when included in the waterfall 's height, allow the water to fall around 256 metres. Visitors can also enjoy the abundance of flora and fauna found in surrounding Kaieteur National Park.

The Rupununi is located in the south of the country on the borders with Brazil and Venezuela. It is full of wildlife such as the elusive jaguar, black caiman, a wide variety of bird species like the harpy eagle, and aquatic life like the red-bellied piranha. In Rupununi, there is also the Indigenous community Surama, which still preserves most of its traditional ancestral practices. Visitors can stay in the ecolodge located in the village and learn about the community and its traditions. Visitors can also explore the surrounding jungle or climb Surama Mountain and enjoy the incredible views across the village and savannah to the Pakaraima Mountains.

Other Highlights of Guyana Off the Beaten Path The Iwokrama Rainforest is a vast one-million acre wilderness. It’s part of the Guiana Shield, which is considered an area of regional and global significance and rich in species diversity. It is home to many threatened species and considered one of the best places to see incredible creatures that are rarely seen in the wild, like the elusive jaguar. Visitors can also explore the canopy walkway, where you can see parts of the rainforest that you would otherwise have to admire in the distance, or enjoy bird watching and sunrise tours that allows visitors to view an abundance of wildlife interactions.

Orinduik Falls is located on the Ireng River on the border between Brazil and Guyana. The Ireng River is a mountain river that courses over steps and jasper terraces on the border of both countries and a tributary of the Takutu River, in effect part of the upper basin of the Branco Amazon River. These multi-tiered series of cascades, found in the middle of the Pakaraima Mountains, make for an ideal place to swim due to the many natural pools that pass between the various waterfalls.

Top Activities and Experiences in Guyana In the Iwokrama Rainforest you can find canopy walkways run by the Iwokrama Centre for Rainforest Conservation and Development. A series of suspension bridges 30m/98ft above the forest floor link together multiple platforms providing bird's-eye views of native greenheart trees, high-dwelling red howler monkeys, and an abundance of birds, wildlife, and fauna. Dawn and late afternoon are the perfect viewing times for birds and other wildlife and a great opportunity to learn about the inhabitants of this immense and diverse jungle.

There are a multitude of locations throughout the country where visitors can enjoy kayaking and canoeing with a guide thanks to its many waterways, like the Burro Burro River and the Essequibo River. The waterways through the rainforest are wide and relatively clear with a few fallen trees following the rainy season, which only adds to the adventure of paddling down the river.

Along with a guide, drive a 4x4 VW Amarok through the Iwokrama Rainforest and explore areas that are difficult to reach by foot. Drive along the trail that is best known for spotting the elusive jaguar, visit the community of Surama, or head to Corkwood to reach the trail leading to the Guianan Cock-of-the-Rock, one of the world’s most colourful and elusive birds. Exclusive to Guyana and popular with locals, this dish is a slow-cooked stew made with a combination of fresh and pickled meats combined with a variety of peppers, herbs, spices, and cassareep (the caramelized bitter sweet root of the cassava plant), which is central to the picture.

This traditional Guyanese food is typically served at breakfast. The name is deceiving as this dish isn't baked at all, but is actually a plain white flour dough that is fried and served warm with topping like peanut butter or jam.

This popular sort of stew is quite earthy, which is typical of traditional Guyanese foods. It’s made with corn, dumplings, cassava, plantains, okra, and hot peppery coconut milk sauce. It also includes lots of root vegetables like potatoes, edoes, or yams and served with salt fish or fried chicken.

A popular drink made from the bark of the carob tree. The bark is harvested, boiled, cooled, then mixed with sugar.

This one pot meal is pretty common across Guyana. It involves a pot of rice with beans or peas (sometimes a combination of both) accompanied by chicken, salted beef tripe, or fish. There are variations throughout the country, with some dishes including chickpeas, callaloo, or even Scotch bonnet peppers. Make sure the company you are booking your tour or trek with treats their guides fairly and respects the cultures and environments their tours are based in. Book with tour operators who are dedicated to sustainable travel and committed to responsible and ethical practices. Rest peacefully and stay in eco-lodges and hotels when possible. Guyana is known for its many community-owned eco-lodges, many of which surround local communities, involving them in the tourism process for the economic development of these communities. Try to travel with reusable items to help reduce waste, like reusable straws, refillable water bottles, or even better, reusable water bottles with filters. Avoid plastic bags or items wrapped in plastic and try to take rubbish with you when you can.

Because of its location, Guyana is a perfect country to connect with other destinations in Latin America. Travelling to Brazil from Guyana is very easy with plenty of flights to connect you to cities like Fortaleza, Manaus, Rio de Janeiro, or Sao Paulo among others. Also, from Guyana you can take a route north through Colombia and then Panama, or many other countries in Central America.

Most Popular Itineraries for Guyana

Guyana in Living Colour offers a 9-day journey exploring the highlights of Guyana, such as the capital city of Georgetown before venturing to Kaieteur Falls followed by a short flight to Rupununi for jungle hikes and exploring the Iwokrama canopies. Jaguars, Otters and Jungles is a 9-day trip exploring the natural beauty of Guyana. It begins in the Georgetown Botanical Gardens before visiting Kaieteur Falls, followed by a visit to the Iwokrama Rainforest. Hike, go on canopy walks, and take a 4WD adventure to learn about the plentiful flora and fauna found in the jungle. Then visit the local Indigenous community of Surama to learn many traditional practices still used today.

Experience the vibrant colours and natural highlights of Guyana on this jungle adventure. Start in the capital Georgetown and venture to the mighty waterfall of Kaieteur Falls. Then fly south to Rupununi to go on jungle hikes, explore the Iwokrama Canopy Walkway, and search for Toucans, Giant River Otters, and elusive Jaguars.

FIRST-CLASS | TAILOR-MADE: Fancy leaving your friends both jealous and scrambling for the world map? Guyana boasts vast, unspoiled rainforests, healthy populations of jaguar, tapir and caiman, plus one of the world's most impressive waterfalls. Time to update your bucket list.