The ancient Egyptians were one of the most impressive civilisations the world has seen, but other ethnicities have shaped this country too, making Egypt a unique mix of the Arabian and Islamic with the Mediterranean. This rich history has created a tapestry of cultural and archaeological treasures unmatched anywhere - so much so that the country is home to one third of the world's antiquities. From the majestic Pyramids still standing proudly to the mighty Nile flowing through the heart of Egypt, the stark Sahara Desert and the pristine beaches of the Red Sea, this is a destination not to be missed. 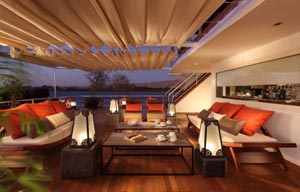 The Sanctuary Nile Adventurer is widely regarded as one of the best boutique ships on the epic Nile, and named as one of National Geographic’s ‘Journeys of a lifetime’. With just 32 cabins, the ship has been decorated in a modern, comfortable style and provided a taste of genuine 5-star luxury on a timeless river.