Things to do in Ethiopia

Every country has its outstanding and special attractions. Goway has selected its top 9 things to do in Ethiopia (not in any particular order) for you to enjoy on your visit to this destination. 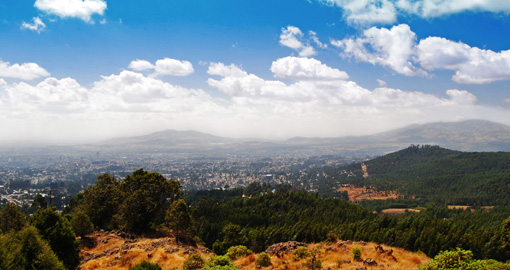 This excellent museum, on an Ethiopian vacation, is housed in the former palace of Haile Selassie and is surrounded by attractive gardens and fountains. It is one of the best museums in Africa and represents Ethiopia’s cultural and social history. The entrance has a set of 13 stairs; each step was put there by the Italians as a symbol of their Fascist domination, one for every year Mussolini was in power. The exhibits include artefacts and handicrafts of the native people, of the country which give an insight into the rich culture of Ethiopia. There is a room devoted to the former Emperor Haile Selassie. Another exhibit includes items of a religious type including icons and crosses. 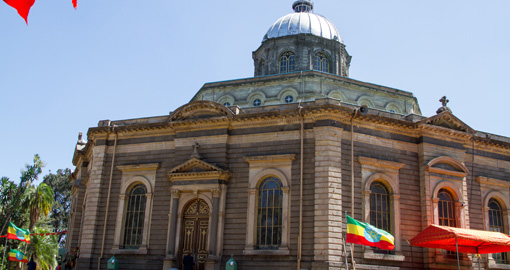 This is a beautiful cathedral and one of the city’s most attractive churches. It was completed in 1911 and it is where Haile Selassie was crowned in 1930. In the grounds is the museum which has the best collection of ecclesiastical items in Ethiopia and includes crowns, crosses, prayer sticks, holy scrolls, coronation garments as well as weaponry used in the wars against the Italians. Additionally, an Imperial throne and stained glass works are on display. 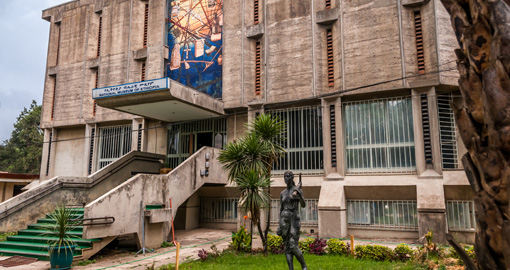 The collection here is representative of important items from the sub-Sahara. The highlight, on an Ethiopia tour, is the paleontology exhibition including the remarkable casts of Lucy, a fossilized human body discovered in Ethiopia and purported to be 3 million years old. Lucy has been influential in changing the understanding of human origins. The real bones are preserved in the archives of the museum. There is also a feature on some extinct animal creatures. Additionally, the museum has exhibits of Ethiopian art from the 14th Century to the present day plus others on arts and crafts, weapons, jewellery and musical instruments. 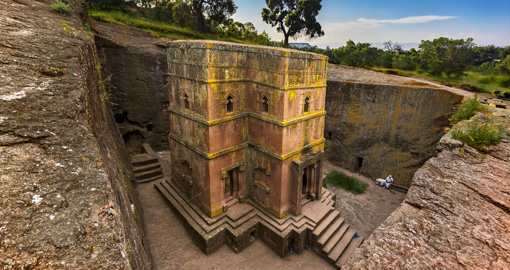 Lalibela is famous for its churches cut out of rock. These churches carved from within the earth play an important part in the history of rock-cut architecture. It is thought these Ethiopian Orthodox Christian churches were first built in the 12th and 13th Centuries AD. They first came to be discovered by Europeans in the 16th Century. The churches have been recognized as a UNESCO World Heritage site and consist of 11 churches assembled in four groups scattered around the town of Lalibela. They are some of the oldest and most interesting in Africa, and the largest churches of their kind in the world. Lalibela was a King of Ethiopia and the churches were built during his reign. The churches are considered an engineering feat given that they were built underground. The most prominent church is St. George’s which is perfectly preserved. 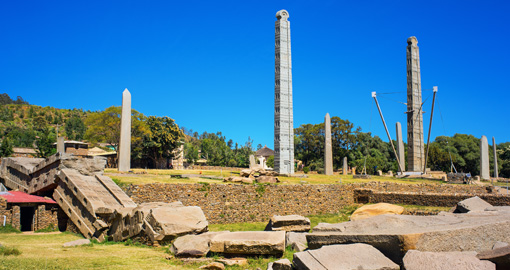 Axum is a city in the northern part of Ethiopia and was the original capital of the Kingdom of Axum that ruled from around 400 BC to the 10th Century AD. The major attractions in Axum on an Ethiopia vacation are obelisks which are around 1700 years old. Most of them are situated in the Northern Stelae Park with the largest being 33 metres/108 feet long and 2.35 metres/7.4 feet deep weighing 52,000 kilograms/520 tons The obelisks, which have architectural designs, are believed to mark where graves were located. Also of interest in Axum is the old and new Churches of Our Lady Mary of Zion which stand next to each other. The old one was originally built in 1665 and is said to have housed the Ark of the Covenant (wooden chest containing the two stone tablets of the Ten Commandments). Other attractions in Axum include the archaeological and ethnographic museums and the Ezana Stone written in a similar manner to the Rosetta Stone. 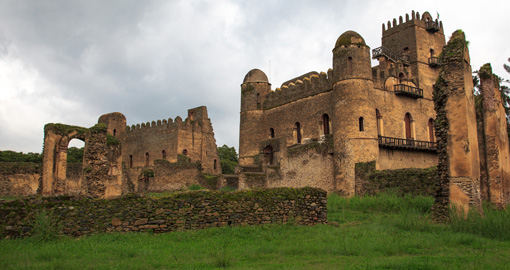 Gondar is a royal and ancient historical city and has been the home of many Emperors who have ruled the country since the 12th Century until the end of the 20th Century. It was the capital of Ethiopia in the 17th and 18th Centuries. This is reflected in its many castles and palaces. Gondar has been called the “Camelot of Ethiopia”. It is also the location of the highest mountain in Ethiopia, Ras Dashen, and the Simien Mountains National Park. Gondar Castle is not just one castle but a complex of castles and palaces. The most impressive and the oldest is the palace of Emperor Fasilidas (1603 – 1667). There are a number of fine churches in Gondar, the finest being the Debre Birhan Selassie which translates as “Light of the Trinity”. Its ceilings are decorated with scenes depicting biblical events. 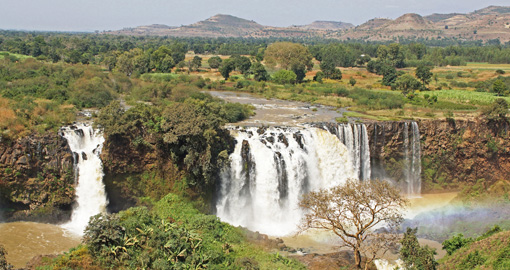 Bahir Dar is one of the main tourist destinations on an Ethiopia tour with its wide avenues lined with palm trees and colourful flowers and attractive gardens. It is considered to be one of the most beautiful and well-planned cities. It is located on the southern shore of Lake Tana, the source of the Blue Nile. The Blue Nile Falls are located about 30 kilometres/18 miles to the south. Emperor Haile Selassie had a small modest palace in Bahir Dar which can be visited. Other attractions are the city’s two markets, the general market which has everything from colourful woven cloth to food and beverages and the roadside market which specializes in baskets. Bahir Dar is home to a number of universities and colleges. The most prominent is the Bahir Dar University. 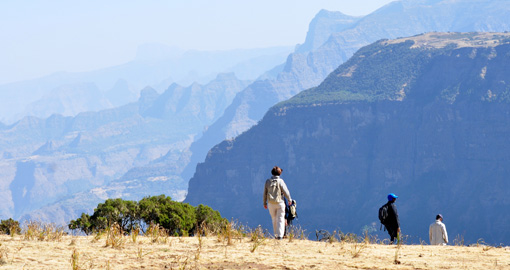 The Simien Mountains National Park is one of the most spectacular landscapes in the world with its mountain peaks, deep valleys and sharp precipices. It was the epicentre of volcanic activity about forty million years ago which produced deep gorges, tall pinnacles of jagged rock and strangely shaped landscapes. It also contains Africa’s fourth highest mountain AT 4500 metres/14900 feet. The park is home to some extremely rare animals such as the Gelada baboon, the Simien fox and the Walia ibex, a goat found nowhere else in the world. 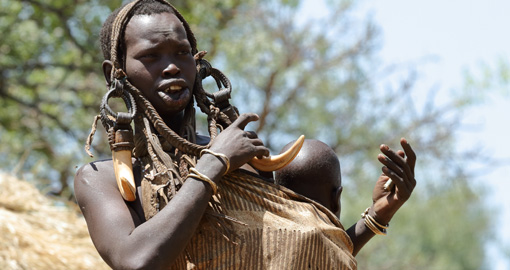 This is the home of the Mursi ethnic group of people. It is estimated that there are around 10,000 members of this tribe. These are the people who decorate their faces with lip plates and who have their own language. The trademark ‘saucer’ lip has become their chief visible distinguishing characteristic. A girl’s lower lip is cut by her mother or by another woman in the village when she reaches the age of 15 or 16. A commonly believed idea is that the practice of cutting and stretching the lower lip originated as a deliberate disfigurement, designed to make women and girls less attractive to slave traders. Like other forms of body decoration found in the world like ear piercing, tattooing, and circumcision, the lip plate worn by Mursi women is seen as an expression of adulthood and reproductive potential.