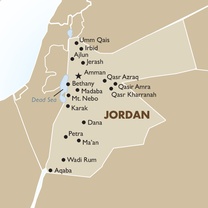 Jordan is a small country bordered by Syria in the north, Iraq to the east, Saudi Arabia to the east and to the south and Israel to the west. The only outlet to the sea is through the Gulf of Aqaba in the south. Geographically, Jordan can be divided into three regions, the Jordan Valley, the Mountain Heights Plateau and the eastern desert or Badia region.

The Jordan Valley forms part of the Great Rift Valley of Africa. To the north is the Ghor, the most fertile part of the country, garnering the nickname the “food bowl” of Jordan. The Jordan River runs through the valley, ending at the Dead Sea, the lowest place on earth’s surface. Completely landlocked, the salt content of the Dead Sea is eight times higher than any ocean and so it supports no indigenous plant or animal life.

The Mountain Heights Plateau is intersected by valleys and riverbeds that are known as wadis. The highlands have varied elevations ranging from 600-1,500 m (1,968.5-4,921 ft) and exist between the Jordan Valley and the eastern desert. The plateau hosts the majority of Jordan’s population centres. The northern highlands have higher elevations and cooler temperatures. The Sharra highlands are found to the south of the plateau.

The eastern desert, also known as the Badia Region makes up 75% of Jordan and is part of the North Arab Desert. It is home to Jordan’s most famous desert, the Rum Desert which hosts the UNESCO World Heritage Site, Wadi Rum. Wadi Rum is also known as The Valley of the Moon as it is a valley cut into sandstone and granite rock in southern Jordan.

At Goway we believe that a well-informed traveller is a safer traveller. With this in mind, we have compiled an easy-to-navigate travel information section dedicated to Jordan.

Learn about the history and culture of Jordan, the must-try food and drink, and what to pack in your suitcase. Read about Jordan's nature and wildlife, weather and geography, along with 'Country Quickfacts' compiled by our travel experts. Our globetrotting tips, as well as our visa and health information, will help ensure you're properly prepared for a safe and enjoyable trip. The only way you could possibly learn more is by embarking on your journey and discovering Jordan for yourself. Start exploring… book one of our Jordan tours today!

After your Jordan tours, why not consider one of Goway's Europe Tours

Book your Jordan tour with Goway!

AfricaExperts is the exclusive division of Goway that specializes in planning and organizing Jordan tours and experiences. Choose from a simple city stopover, a small group tour, a holiday of a lifetime, a stay of distinction, a beach stay and much more. We want to be your first choice when next you go globetrotting to Jordan.