Things to do in Madagascar

Every country has its outstanding and special attractions. Goway has selected its Top 9 Things to do in Madagascar (not in any particular order) for you to enjoy on your visit to this destination. 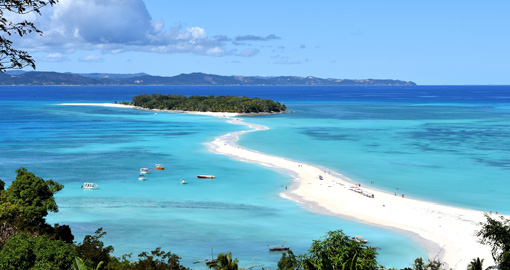 The Rova of Antananarivo 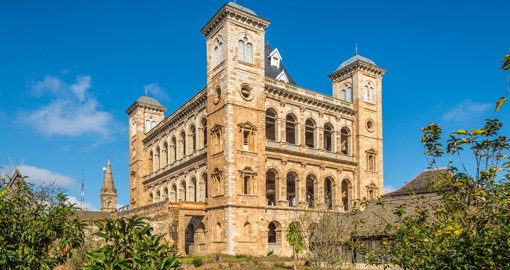 The Rova of Antananarivo is a royal palace complex that served as the home of the sovereigns of the Kingdom of Imerina in the 17th and 18th Centuries, as well as of the rulers of the Kingdom of Madagascar in the 19th Century. It is located on the highest point of Antananarivo's numerous hills. It was destroyed in a fire in 1995 but is under restoration and can be visited. The palace gate is protected by a carved eagle, the symbol of military force, and a phallus, the symbol of circumcision and thus nobility. The palace is also the resting place of many of Madagascar’s kings.

Avenue of the Baobabs, Menabe 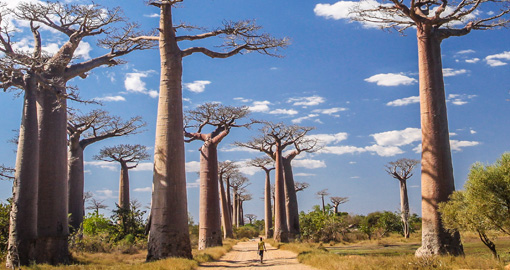 This is a large group of baobab trees (giant deciduous trees) which line the road between Morondava and Belon'i Tsiribihina in the west of Madagascar. It is one of the most visited locations in the country and has been granted protected status. Along the Avenue, which is around 2635 metres/2820 yards long, are 200/250 trees about 30 metres/98 feet in height all native to Madagascar. The trunks are 47 metres/150 feet in diameter. These trees are not only rare but ancient – 800 years old - and create a beautiful and unique scene. It is hoped that the trees will last another 800 years. 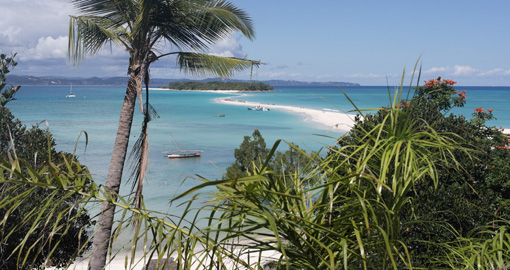 Nosy Be, which means big island, is an island off the northwest coast of Madagascar. It is Madagascar's largest and most popular beach resort. However, it is not too commercial or busy. The climate is sunny year-round, and Nosy Be is a paradise for water sports such as diving as well as swimming, snorkeling, and sailing. The beaches are good with some reasonable hotels. You can explore the island with its rolling landscapes, visit cocoa and vanilla plantations, crater lakes, and waterfalls. 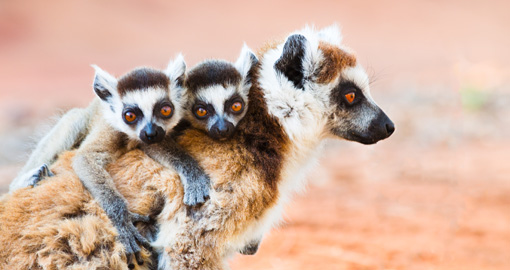 Close to Antananarivo is Lemur’s Park, a private reserve of lemurs, the animal only found naturally in Madagascar. Lemur’s Park is the only reserve in Madagascar where you can observe 9 species of lemurs in total freedom. It is not a zoo but a botanical park. It is a good place to visit if you haven't had the chance to see lemurs elsewhere. The lemurs here are free-ranging and well habituated so you can see them close up. There are about 50 individual lemurs altogether. Most of the animals are former pets or individuals that were threatened in their natural habitat, and the reserve rehabilitates them for reintroduction into the wild. Featured daily feeding times occur every two hours between 10:00 a.m. and 4:00 p.m. 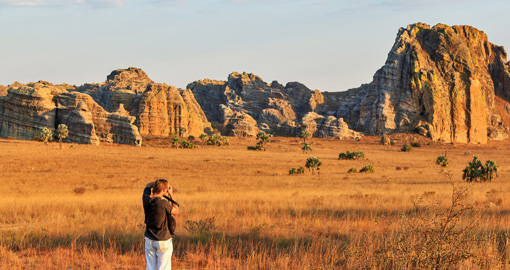 Isalo National Park is known for its wide variety of terrain, including sandstone formations, deep canyons, palm tree-lined oases, and grassland. The park was opened in 1962. Traditionally, it has been inhabited by the Bara people, nomadic people who subsist on cattle farming. Gorges here are filled with yellow savannah grasses, sculpted buttes, vertical rock walls, deep canyon floors through which there are rushing streams, and pools for swimming. All of this changes with the light causing extraordinary sunsets beneath a huge sky. It is Madagascar’s most visited national park. A local guide is required for visitors entering the park, guides and porters can be hired in nearby Ranohira. Treks in the park can last from several hours to a week or longer. The park contains 340 species of animals including 82 species of birds. 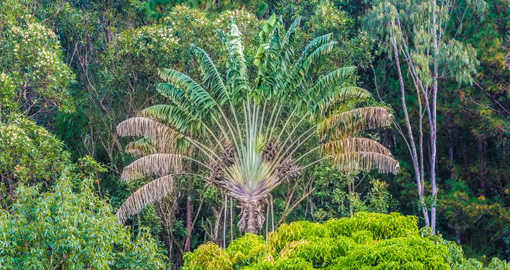 This park in eastern Madagascar, 3 hour drive from Antananarivo, is split into two parts. However, both parts belong to the same forest but because of human activities, it is divided in two. One attraction here is the primary forests which is covered with moss and fern trees, There are more than hundred orchid species blooming between September and January. The park has many endemic rare and endangered species, including 11 lemur species and is known for its population of Madagascar's largest lemur, the indri. Interestingly, the peculiar call of the indri occurs very early in the morning until noon and again in the late afternoon. This lemur lives in small groups and cannot survive in captivity. Also to be found here are 100 species of birds, many of them endemic. Hikes ranging from 1 to 6 hours are available in both parts of the park. A local guide is required for visitors entering either parts of the park. 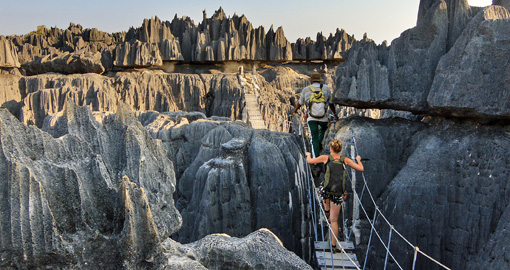 The spectacular Tsingy de Bemaraha National Park is in north-west Madagascar and is a UNESCO World Heritage Site. The name translates as “walking on tiptoes” as it is made up of limestone needles. It is a nature reserve with canyons, gorges, undisturbed forests, lakes, mangrove swamps plus an outstanding richness of fauna and flora which have not been completely recorded. It is home to an exceptionally large number of endemic species of plants and animals that are found only within the park. There are 11 lemur species including Decken's sifaka, red-fronted brown lemur, fat-tailed dwarf lemur, grey mouse lemur, and others. More than 100 bird species can be found inside the National Park including the critically endangered Madagascar fish eagle, crested ibis, Madagascar wood-rail, giant coua or Coquerel´s coua. Generally, most visitors coming to the park usually stay over three nights to explore this unique and amazing place. The park is only open during the dry season from April to November, it is inaccessible during the rainy season (mid-end November to mid-end May). 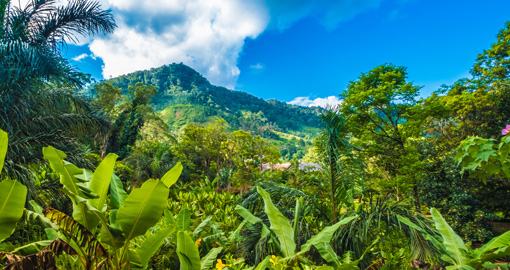 Ranomafana National Park is in the south-eastern part of Madagascar. It is a large tropical rainforest home to several rare species of flora and fauna including the golden bamboo lemur, the greater bamboo lemur, black and white ruffed lemur, and over 130 species of frogs. The park was established in 1991 with the purpose of conserving the unique biodiversity of the local ecosystem. It is one the most spectacular national parks in Madagascar. Due to the good access and suitable location near the highway, it has become one of the most visited places on the island. There are around 115 species of birds, 30 of which are endemic to this part of Madagascar. Other wildlife includes 62 species of reptiles (chameleons, snakes, fringed and satanic leaf-tailed geckos are pretty common), 98 frogs, 90 butterflies, 350 spiders, and several fishes. These are best seen during night walks, when chameleons in particular reflect white in the beam of a torch. A local guide is required for visitors entering the park and can be arranged at the park office. 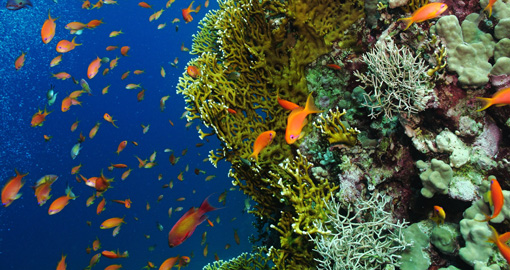 Nosy Be is where most of the top diving sites can be found. However, there are quite a few smaller islands found nearby which also have amazing dive sites for all levels of diver. These small islands include Nosy Komba, Nosy Sakatia, Nosy Tanikely, Nosy Miitsio and Nosy Iranja. All are all home to incredibly diverse marine life: Manta Rays, Marine Turtles, and Stingrays. As for Whale Sharks, the time to see them is between the months of November through December. Generally, the best time to dive is between April and August, around this time the visibility is excellent. The sea surrounding Madagascar is home to one of the world’s longest, continuous coral reefs. These waters are teeming with life and should not be missed.