Things to do in Namibia

Every country has its outstanding and special attractions. Goway has selected its Top 9 Things to do in Namibia (not in any particular order) for you to enjoy on your visit to this destination. 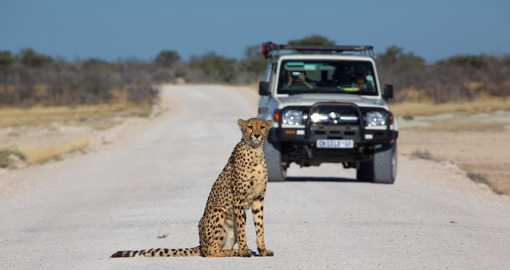 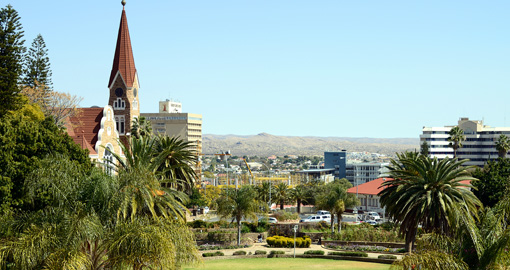 Windhoek is the social, economic, political, and cultural centre of the country. It is also a historic city and, in some ways, a visit here will take you back in time. The city has a number of colonial buildings and sites like the Heroes’ Acre, a war memorial. This has over 175 graves for Namibians to remember the past and hope for a good future. On a Namibia vacation, check out streets with names like Robert Mugabe Avenue and Fidel Castro Street. Windhoek has a number of good museums to enjoy on a Namibia vacation such as the Geological Survey Museum, the Railway Museum, the National Earth Sciences Museum, and the Independence Memorial Museum. 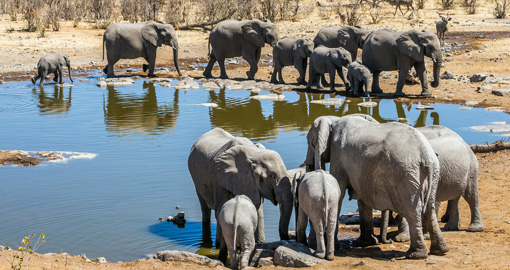 Etosha is a large game park and one of the world’s great wildlife-viewing places. Unlike other parks in Africa, where you can spend time looking for animals, in Etosha, you can park right next to the animals at one of the many waterholes especially in the winter season and view lions (more than 400 exist here), elephants, giraffes, springboks, zebras, jackals, hyenas, black rhino (a big attraction) and much more. It is home to 114 animal species, 340 bird species and 16 reptile species. The best time for a wildlife safari drives is at dawn and late in the evening. Guided night drives on a Namibia safari are the best chance to see lions hunting. There are three main camps for accommodation which overlook the watering holes and are floodlit at night. 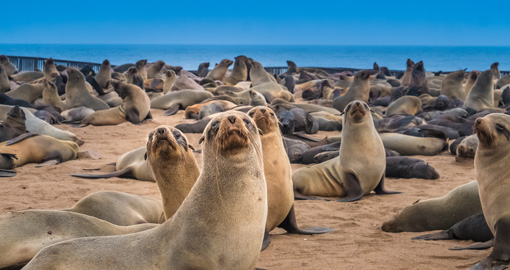 This is the best-known breeding colony of Cape fur seals along the Namib coast. In this reserve, there is a large population of seals which take advantage of the rich concentration of fish in the cold Benguela current. In fact, this is the biggest Cape Fur Seal colony in the world. You may see as many as 100,000 seals lying on the beach or in the surf. However, seals are culled, partly for selling their hides and partly for protecting the fish stock. The breeding time is in October and November. 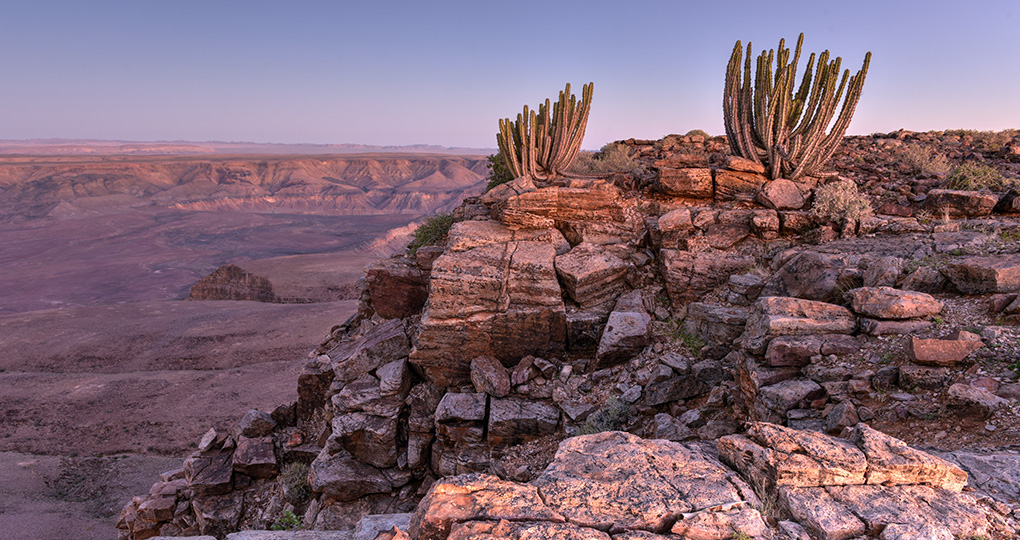 This is a spectacular canyon which is 160 Kilometres/100 miles long and 27 kilometres/17 miles wide. The canyon follows the sandy bed of a river. It is second only to the Grand Canyon in size. The main viewpoint is at Hobas where, on a Namibia vacation, you will enjoy the spectacular beauty of the canyon. If you are adventurous, you can actually walk the five-day Fish River Hiking Trail for 90 kilometres/56 miles. It is one of the most popular hiking trails in Southern Africa. The terrain changes quite a bit and you might see wildlife roaming around the desert landscape. You have to book your hike well in advance because only 30 hikers are allowed in the canyon per day. Another attraction is the diversity of the rock formation. 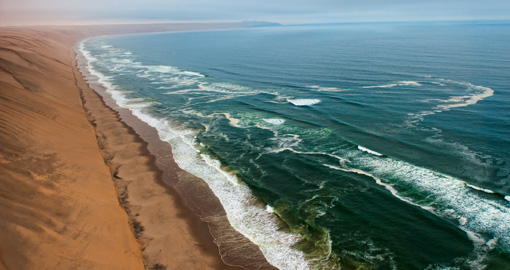 The Skeleton Coast along the northern part of the Atlantic Coast is very remote and has a wild feel about it. The name comes from the large number of shipwrecks that have taken place over the years here. There are towering sand dunes which reach a height of 100 metres/300 feet for hundreds of miles. The coastline is almost totally uninhabited and untamed. It is the wildest part of the whole of the African continent. Predatory animals such as lions and hyenas can be spotted searching for maritime victims. 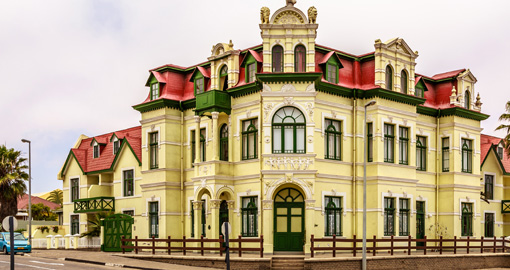 Swakopmund is the country's largest coastal town and a popular place for locals on vacation. The city's German origins are quite prominent reflected in the beautiful old German Colonial buildings which contrast to the adjacent Namib Desert outside the city. Some of the outstanding sites in Swakopmund include the Woermannhaus, built-in 1905, is a German half-timbered house with a 25 metre/80 foot tall tower and a national historic landmark; the Swakopmund Jetty which juts out 300 metres/980 feet into the sea and where you can view the sunset; the Kaiserliches Bezirksgericht, built-in 1902, now the State House and residence of the Namibian president. 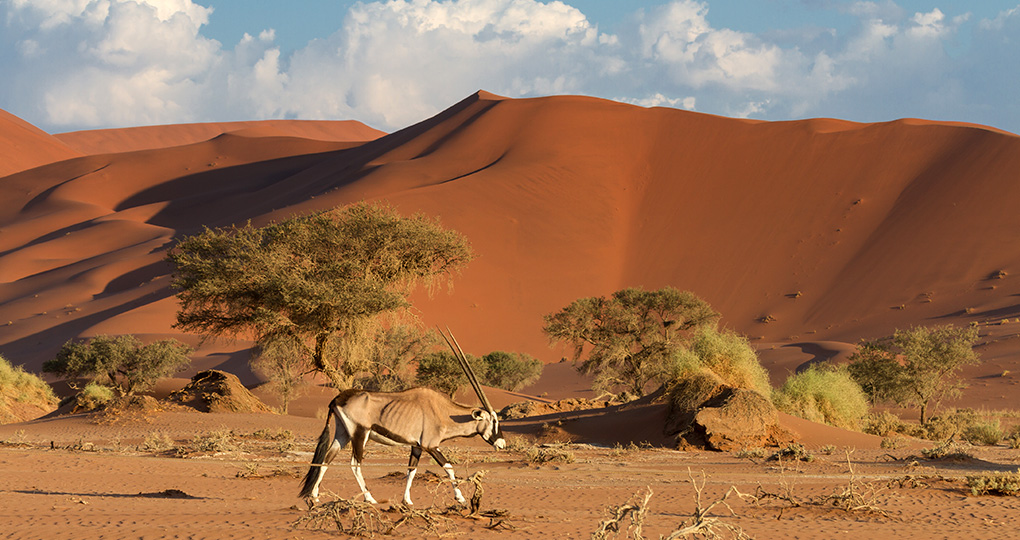 Situated in the largest conservation area in Africa, the Namib-Naukluft National Park, Sossusvlei is the country’s most spectacular and best-known attraction on a Namibia vacation. This is due to the large red dunes that surround it. The dunes are some of the highest in the world reaching a height of almost 400 metres/1300 feet and are magnificent especially in the morning and evening light. Sossusvlei is known for its red, star-shaped dunes which contrast against the stark white floors of salt pans. Despite the harsh desert conditions here, there is a wide variety of plants and animals that have adapted to survive. These include small reptiles and insects including geckos and snakes, but also some large mammals such as the Oryx, the symbol of Namibia. Some of the better-known dunes go by names such as the Elim Dune, Dune 45 and Big Daddy, the highest dune. 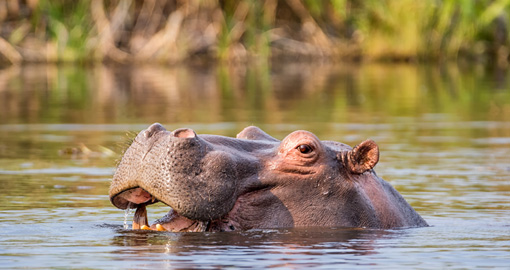 Caprivi is the northeastern panhandle of Namibia and is quite different from the rest of the country. It is about 450 kilometres/280 miles long and 32 kilometres/20 miles wide. It is a region rich in wildlife and a corridor for animals to cross into and out of Botswana and into Angola, Zambia and Zimbabwe. There are several national parks found in the Caprivi Strip such as Bwabwata National Park, Mudumu National Park and Nkasa Rupara National Park. It receives large amounts of rainfall and therefore has lush vegetation which attracts the wildlife. 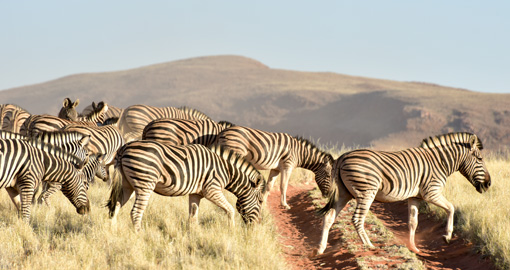 This is the largest private nature reserve in Africa. It was developed by a German-Namibian businessman who noticed that the land was completely out of its ecologic balance due to excessive pasture farming and decided to return it to its original state as a nature reserve. There are no fences and game, with a diversity of animals, has been reintroduced to the reserve including large herds of gemsboks, springboks and zebras, as well as kudus, klipspringers, spotted hyenas, jackals, and Cape and bat-eared foxes. The area consists of dunes, desert grasslands and wild, isolated mountain ranges.