Things to do in Tunisia

Every country has its outstanding and special attractions. Goway has selected its Top 9 things to do in Tunisia (not in any particular order) for you to enjoy on your visit to this destination. 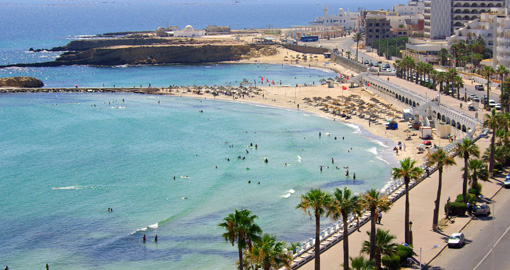 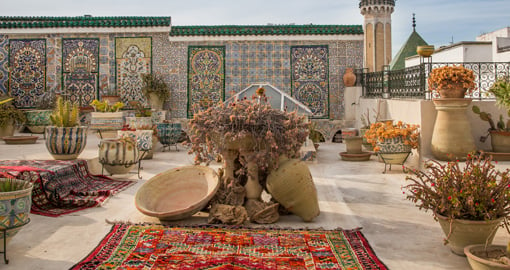 This is a sprawling maze of ancient streets and alleyways in Tunisia’s capital. It is a very impressive medieval Medina and home to many shops and stalls selling everything from clothes to souvenirs. In the back streets, you can see artisans at work. Also scattered throughout the Medina are highly colourful palaces, mansions and mosques. The best time to visit Medina on a Tunisia vacation is in the morning when it is less crowded. 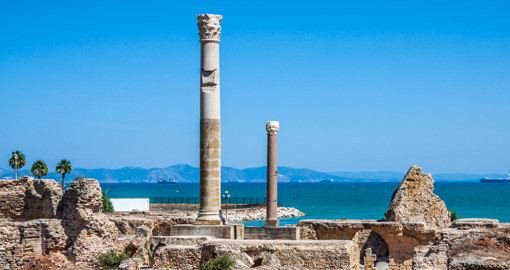 This UNESCO World Heritage site is situated in Tunis, the capital and is of importance for its history. This started with the Phoenicians around the 8th Century BC as a mighty city. However, after battles with the Romans, it was destroyed in 146 BC. It was then reconstructed as a major city of the Roman Empire. By the early 2nd Century AD, it was the third largest city in the Roman Empire with a population of around 300,000. The Byrsa Hill ruins are the central feature of Carthage and the Capitol and the Forum are fairly well-preserved. Later on, in the 4th Century AD, Carthage became the leading city in Christian Africa. It was again destroyed by the Arabs in the 7th Century. A special place at Carthage is Tophet where excavations found thousands of urns which revealed the fact that during the Phoenician period, it was the practice to sacrifice first-born children whose ashes were contained in the urns. 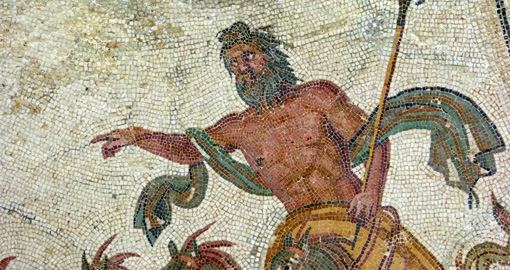 The Bardo Museum houses the world’s most renowned Roman mosaic collection as well as a collection of marble statues and is one of the most important museums in the Mediterranean region. It is second only to the Egyptian Museum in Cairo for having such a rich collection. The museum is located in an opulent Tunis palace. The rooms are full of treasured displays of mosaic art excavated from Tunisia’s ancient sites. The Islamic Department contains, in addition to famous works such as the Blue Qur'an of Kairouan, a collection of ceramics from the Maghreb and Anatolia. The Bardo is one of the most amazing museums you will find not only on a Tunisia vacation but also anywhere else. 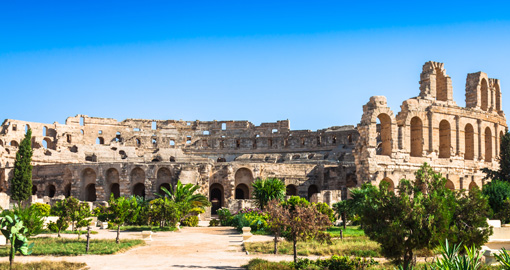 This is another UNESCO World Heritage site and is a very well-preserved Roman amphitheatre situated between Sousse and Sfax. It is one of the best examples of amphitheatre architecture left standing in the world. You can sit in the seats and imagine the gladiator contests that took place. You can also explore the underground passageways and cells beneath the arena. The amphitheatre was built in the 2nd Century AD as a symbol of the prosperity of the times. El Djem's huge amphitheatre is the 4th largest after Rome's Colosseum, the Pozzuoli amphitheatre near Naples and the one at Carthage. It provided seats for over 30,000 thousand people.

The Island of Djerba 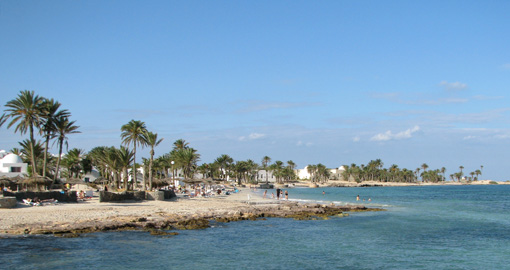 The attractions of Djerba, an island just 5 kilometres/3 miles of the coast of Tunisia, are many. First and foremost, it offers wonderful beach resorts for Tunisia tours. The best known is Plage Sidi Mahares, the most established and developed resort on the island with restaurants and cafes running along its length. The beach itself extends for 13 kilometres/8 miles. The main centre of Djerba is Houmt Souk Old Town with its quaint maze of alleyways lined with picturesque whitewashed houses and shops selling ceramics, traditional handicrafts jewellery, shoes, silverware and leather goods. Bordj el Kebir is a fort that looks out on the harbour dating back to the 13th Century. Midoun is a market town with an old medina full of attractive buildings and alleyways. Every Friday a bustling market takes place. You can also head into the Sahara from Djerba. The oasis town of Nefta is a major centre for date growing and again, has an old medina with old houses and alleyways. 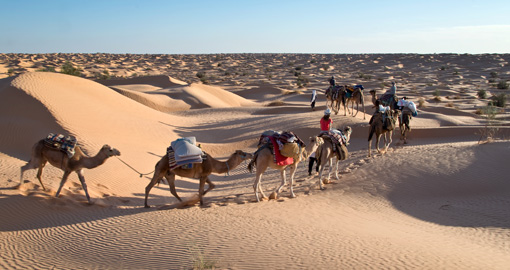 This is an area in the Sahara desert known for its sand dunes which are very beautiful and look like huge waves as they are shaped by the ever-shifting desert sands. You can, if you so wish, ride dune buggies and go on camel treks. However, the highlight is to sit on top of one of the dunes and watch the sunset over the Sahara. 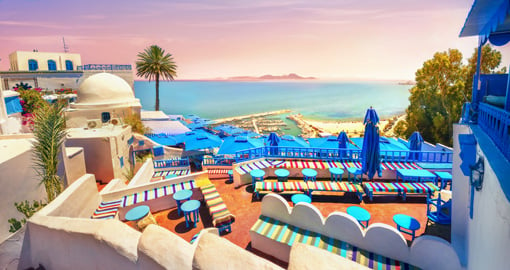 Sidi Bou Said is a cliff top village just outside of Tunis which is very picturesque and photogenic. This is a Tunisian village at its finest with whitewashed alleyways, wrought-iron window frames and colourful blue doors. It is a place to relax, soak up the atmosphere and perhaps do some shopping at the local artisan and handicraft stalls. Cars are banned from the side streets. This is also one of Tunisia's top spots to pick up ceramics for which Tunis is famed. For the best views, walk up to the Mausoleum of Abu Said el Baji from where you will have panoramic views of the Gulf of Tunis, Carthage and Tunis itself. You can, on a Tunisia vacation, also visit the Museum Dar el-Annabi which is actually a traditional-style Sidi Bou Said house. The family that lives here has opened up some of the rooms to show visitors the typical design and layout of local houses. After a visit, tea is usually offered in the courtyard by the family. 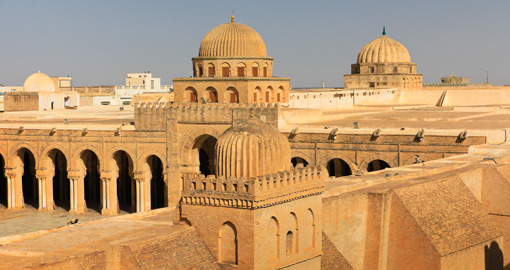 This is where you will find a UNESCO World Heritage-listed Colosseum, the second-largest in the Roman Empire after Rome's. Its seating capacity has been estimated at up to 35,000. It is built entirely of stone blocks with no foundations and has three levels of arcades. The Colosseum is believed to have been built in the 3rd Century AD. It is said that Gordian, an Emperor of Rome here was said to have committed suicide in the amphitheatre when it became obvious that a rebellion was doomed. You can climb to the upper tiers and explore the underground passageways. The town of Kairouan has many interesting buildings including excellent examples of Islamic architecture in its mosques, minarets and other monuments. It is the 4th holiest city of Islam after Mecca, Medina and Jerusalem. The town is also famous for its quality carpets.

The Medina of Sousse 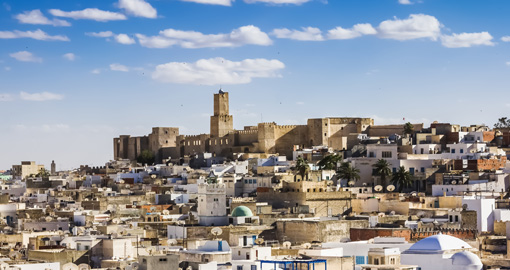 The Medina of Sousse is designated UNESCO a World Heritage and is a typical example of the architecture of the early centuries of Islam. It includes a Kasbah, fortifications, the Great Mosque of Sousse and the Archaeological Museum of Sousse. Its walls are particularly impressive stretching for 2.2 kilometres/ 1.5 miles with square turrets and a watchtower built in 859 AD. The Medina’s narrow streets, with their white-washed walls and decorative Arabic doors, a covered souk (market) and the octagonal minaret of the Zaouia Zakkak are worth strolling through.