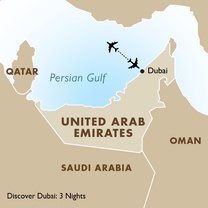 The 'Pearl of the Arabian Gulf', the area of Dubai is 4,114 km², equivalent to 5% of the United Arab Emirates' total area excluding the islands. The Emirate's population is 2,106,177. A water creek known as Khour-Dubai, 10 Kilometres long, dividing the town into two divisions, penetrates Dubai City. The Southern division, known as Bur-Dubai, comprises the Ruler's office, head offices and major companies, banks, customs, port, broadcast station and postal authority. The most significant landmarks are the Dubai World Trade Centre, the Zoo and Al-Jumeirah Coast Park.

The Northern division, known as Diera, is the centre of business and tourism and comprises most shops, markets, schools, hotels, clubs and Dubai International Airport. Al-Maktoum and Al-Garhoud Bridges and Al-Shindagah Tunnel, which passes under the creek, link the two divisions.

Jebel Ali area is considered one of the most significant industrial and commercial areas in the whole country. It has the largest free trade zone in the Middle East.

Due to its location, Dubai has become a connecting link between the West and the Indian subcontinent, the Far East and Africa since time immemorial. Traditional Arab hospitality complemented by a highly sophisticated infrastructure has contributed to a perfect atmosphere for the development of tourism. Dubai is endowed with an extensive coastline, sandy beaches and varied landscapes where a wide variety of activities can be indulged, ranging from powerboat races to sand skiing. Manicured golf courses provide ready enjoyment and for the less active, shopping opportunities abound. In addition, the country's deep-rooted cultural heritage, accessible in the many cultural centres, has been a powerful attraction for tourists. Dubai has also become a much sought-after venue for conferences, regional and international exhibitions and major sports events.

Archaeologists trace Dubai's early history back some 5,000 years to an established community on the ancient trade routes between Oman and Yemen in the south and the flourishing civilizations of the Tigris and Euphrates valleys in the north. The city's recent development began only in 1833, when a branch of the Bani Yas family of Abu Dhabi, led by Sbaid bin Said Al-Maktoum, whose descendants still rule the emirate today, left Abu Dhabi to settle in Dubai. Attracted by the Creek, a rare haven on the southern shores of the Gulf, the small community of some 800 people lives by trading in fish and pearls, farming camels and goats and careful tending date groves. It was a modest existence, but it established Dubai as an entrepot port and formed a secure base for the commercial development that was to come – and still continues today.

Bounded on the east by the Hajar Mountains and on the south and east by the forbidding vastness of the Arabian Desert, Dubai's main contact with the rest of the world was by sea. It is this combination – the traditional heritage of the Bedouin of the desert and the wider view of the seaborne trader – that has helped to create the nation's unique character. Whilst Dubai's culture is firmly rooted in Islamic traditions, the long ties with other nations, combined with the people's courtesy and friendliness, have led to a willing tolerance of different lifestyles. Foreigners are free to practice their own religions, alcohol is served in hotels and, provided reasonable discretion is shown, the dress code is liberal. Women face no discrimination, may drive and need to have no fear of traveling unescorted.

By the late 1870s, Dubai was the principal port in the region, bringing trade from Iran, India and East Africa. The town received a boost in the early years of this century, when merchants from the eastern coast of the Gulf, disenchanted with burdensome customs duties, decamped to the more congenial business environment of Dubai. Now, nearly 100 years later, today's multinational businesses are doing the same – and for many the same reasons.

Pearling continued to be the main basis of the city's prosperity until the 1940's when the invention of the cultured variety severely damaged the industry. Ever resourceful, however, Dubai's merchants developed other trades, notably the import and export of gold – the modern souks (marketplace) still testifying to this expertise.

After a presence of nearly a century-and-a-half in the Gulf, the British withdrew from the region in 1971. Sheikh Zayed bin Sultan Al Nahyan, ruler of Abu Dhabi, and Sheikh Rashid bin Saeed Al-Maktoum, the former ruler of Dubai, established the basis upon which the federation would be founded – and on 02 December 1971, the United Arab Emirates came into being.

The revenues generated by oil – discovered in Dubai in 1966 – enabled the development of an infrastructure that has attracted both commerce and industry, as well as the increasingly important leisure business. Today, Abu Dhabi and Dubai complement each other – the former being the seat of the federal government and the centre of the oil industry; the latter the region's main commercial centre.

The population of Dubai, which enjoys one of the highest per capita incomes in the region, has approximately 2,106,177 residents, the total population for the country as a whole being 9,346,129. It has the sixth largest economy in the area and is the second largest exporter of goods and services. Reflecting its success in diversification, approximately 80 percent of the gross domestic product is not unrelated to oil.

Dubai is an Islamic country and clothing should be modest. During the winter months, light sweaters are recommended. Beachwear is acceptable at beach clubs, hotels and public beaches. During the daytime, the dress code is fairly casual although more exclusive restaurants may expect guests to dress more formally during the evening.

Taxis are readily available and reasonably priced. Metered taxis are recommended over private taxis whose rates are negotiable. There is a surcharge on taxis from Dubai airport.

Dubai is known as a shopper's paradise. Many of the world's finest goods are available at prices well below what would be paid in other parts of the world. The Gold Souk is deservedly famous for its jewellery. Bargaining is acceptable although the basic gold price is set and is dependent on weight.

In the main souks, you will find everything from a range of textiles and tailors to perfumed oils and electronic items. Bargaining is expected and a discount of 15 to 25 percent is usually given.

Canadians and US passport holders can obtain their visas on arrival in the UAE. Passports must be valid for at least 6 months from the date of entry into Dubai.

During the Holy Month of Ramadan all Muslims fast from sunrise to sunset, and eating, drinking and smoking in public areas during daylight hours is strictly prohibited. Alcohol will not be served during this time; however, alcohol is served in restaurants and bars after sunset for non-Muslims. Live entertainment, loud music and dancing are prohibited during this period. Most businesses and shops are open only for a few hours in the morning and re-open after sunset until well after midnight.

All Goway's featured hotels make concessions for their clients and keep a restaurant open during the day for resident guests only. Sunset marks the start of Iftar, which is the breaking of the fast. This begins with a traditional meal of dates, dry fruits and fresh juices, followed by a lavish feast of grilled meats, flavoured rice and another typical Arab fare including sweetmeats. Throughout Ramadan conservative dress should be worn in public.

(An asterisk denotes a public holiday. Government offices, banks, and many stores will be closed on these days.)

*Please note that these events are scheduled according to the Islamic calendar. This is based on lunar observations and moves forward by approximately 11 days each year.

Every effort has been made to keep the schedule of events up-to-date. However, events are subject to change.

At Goway we believe that a well-informed traveller is a safer traveller. With this in mind, we have compiled an easy-to-navigate travel information section dedicated to United Arab Emirates (UAE).

Learn about the history and culture of UAE, the must-try food and drink, and what to pack in your suitcase. Read about UAE's nature and wildlife, weather and geography, along with 'Country Quickfacts' compiled by our travel experts. Our globetrotting tips, as well as our visa and health information, will help ensure you're properly prepared for a safe and enjoyable trip. The only way you could possibly learn more is by embarking on your journey and discovering UAE for yourself. Start exploring… book one of our United Arab Emirates tours today!

After your United Arab Emirates tours, why not consider one of Goway's Europe Tours

Book your UAE tour with Goway!

AfricaExperts is the exclusive division of Goway that specializes in planning and organizing United Arab Emirates tours and experiences. Choose from a simple city stopover, a stay of distinction, a locally escorted tour, an independent travel module and more. We want to be your first choice when next you go globetrotting to United Arab Emirates.