Things to do in the United Arab Emirates

Every country has its outstanding and special attractions. Goway has selected its Top 8 Things to do in the United Arab Emirates (not in any particular order) for you to enjoy on your visit to this destination. 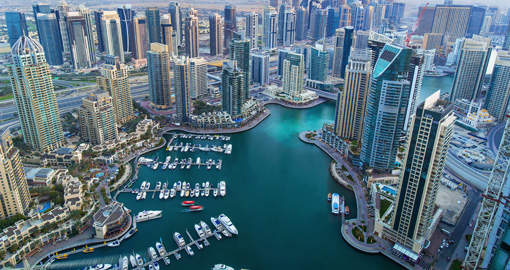 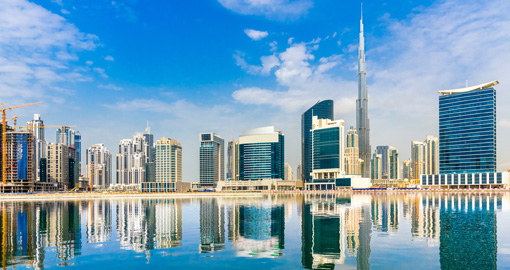 The Burj Khalifa is an amazing feat of architecture and engineering. It opened in 2010 with two observation decks on the 124th and 148th floors and a restaurant/bar on the 122nd (the world’s highest). It is the world’s tallest building at a height of 828 metres/2690 feet. It is also the world’s tallest free-standing structure and has the longest elevator. The observation deck on the 148th floor is called ‘At the Top Sky’. If you visit it, you will be met, greeted and treated to soft drinks, coffee, and dates. Apart from the views, there is an interactive screen where you 'fly' to different city landmarks by using your hands over high-tech sensors. Outside the building is the Dubai Fountain which shoots water up to 150 metres/500 feet into the air. The Burj Khalifa is surrounded by a large park with a design based on a desert plant, the Hymenocallis. 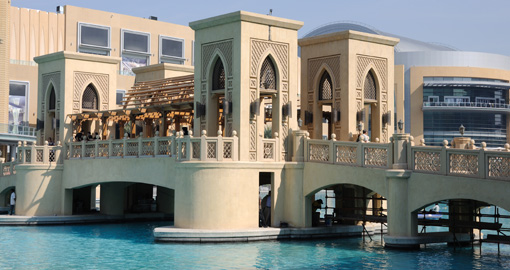 The Dubai Mall is the largest mall in the world by area and is the most visited building on earth attracting over 65 million visitors every year. This is more than New York City! There are 1200 shops offering everything imaginable. The shops include the French department store, Galeries Lafayette, Britain’s famous toy store, Hamley’s and Bloomingdale’s. It also has a luxury hotel, 22 cinemas and 120 restaurants and cafes. There is an aquarium and an underwater zoo with more than 300 different species of marine animals including sharks and stingrays. One highlight of the Dubai Mall is the Gold Souk., one of the oldest and most fascinating markets in the United Arab Emirates with a large selection of gold, jewellery and gemstones. All merchandise here is carefully regulated by the Dubai government to ensure quality. You can be sure your purchases will be genuine and there are lots of bargains to be had. 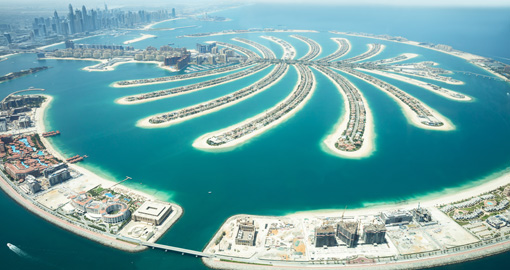 Palm Islands are three artificial islands, Palm Jumeirah, Deira Island, and Palm Jebel Ali and are just off the coast of Dubai. They are an amazing engineering feat. The most popular is the Palm Jumeirah which is shaped like a palm tree with 17 “fronds” and a “trunk” plus a crescent which is 11 kilometres/7 miles long. It is home to a large number of residences, as well as leisure and entertainment centres plus hotels, nightclubs, spas, and restaurants. There is an aquarium and a major water park. Access to the islands is via monorail and an underwater tunnel connects the topmost frond to the crescent. 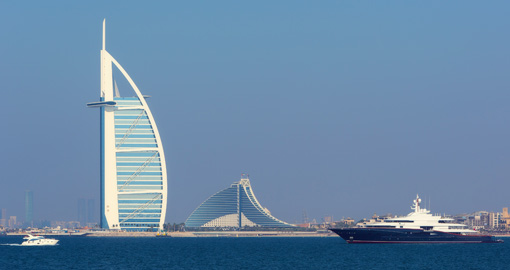 The Burj al Arab is a private resort and a luxury hotel which has been described as 7-star property. It is the third tallest hotel in the world and is located on an artificial connected to the mainland by a private bridge. The shape of the hotel is designed to resemble the sail of a ship. There is a helipad on its roof. It is closed to non-guests. However, you can visit it if you have a dining reservation at one of the restaurants. Afternoon tea is also a way to visit the hotel. The last price available however was around US$150 per person! If nothing else, you can admire it from a distance. 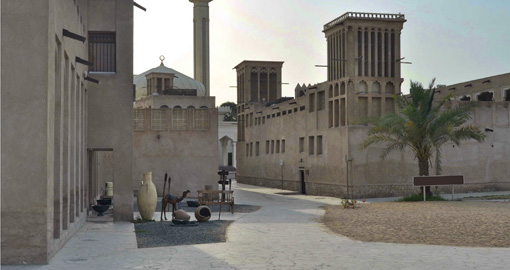 This is a restored heritage area formerly known as the Bastakia Quarter. It has narrow walking lanes flanked by sand-coloured houses topped with wind towers. Today there are about 50 buildings containing museums, craft shops, cultural exhibits, courtyard cafes, art galleries, and two boutique hotels. The district was built in the early 1900s by merchants from the Persian town of Bastak who settled in Dubai. The buildings of the district are currently used for cultural and artistic activities ranging from art exhibits to cultural centres. The district also hosts a number of seasonal cultural and artistic events such as the Sikka Art Fair, Artists-in-Residence Programme, Heritage Week, National Day Events, and religious celebrations. 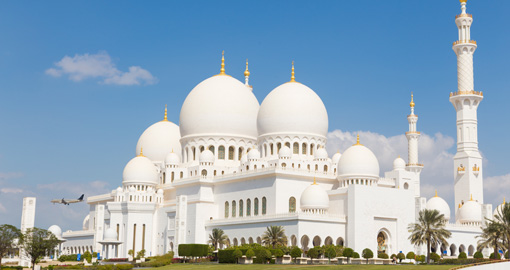 The Sheikh Zayed Grand Mosque in Abu Dhabi is the largest mosque in the country. It was completed in 2007. The building complex measures approximately 290 metres/960 feet by 420 metres/1,380 feet. Covering an area of more than 12 hectares/30 acres, it was established as “a structure that would unite the cultural diversity of the Islamic world with the historical and modern values of architecture and art”. The library contains classic books and publications addressing a range of Islamic subjects such as science, civilization, calligraphy, and the arts including some rare publications dating back more than 200 years. The mosque is large enough to accommodate over 40,000 worshippers, while the main prayer hall can hold over 7,000. The courtyard, with its floral design, is considered to be the largest example of a marble mosaic in the world. The carpet in the main prayer hall is considered to be the world's largest carpet made by Iran's Carpet Company. The weight of this carpet is 35 tons and is predominantly made from wool and took approximately two years to complete. There are 7 chandeliers, the largest of which is the second largest known inside a mosque and the third largest in the world. 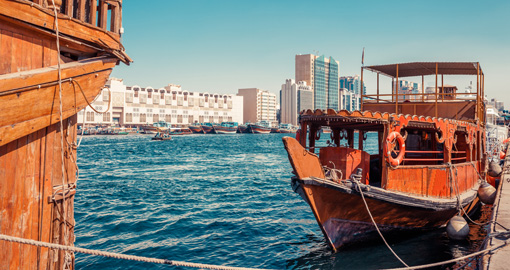 The Dubai Creek flows between Deira and Dubai in the historic centre of Dubai. One way to enjoy the city is to cruise on a traditional Arab Dhow to view the city skyline and Dubai landmarks. Dhows are wooden boats with long, thin, hulls, typically used to carry heavy cargo for trading. Cruises can be taken in the daytime or at night with dinner cruises being available. 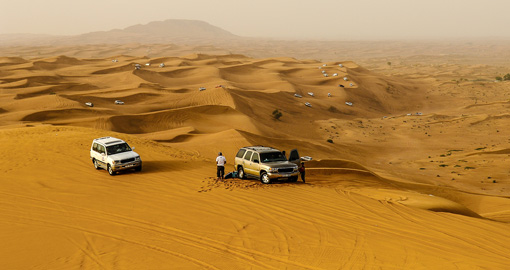 The desert around Dubai has become the most visited desert region in the world. It is quite stunning and has been described as mysterious and ever-changing. A desert safari involves a jeep drive through enormous mounds of sand called "dune-bashing" with a stop at a campsite where you will have the opportunity to ride camels, get henna tattoos and be entertained by a belly dancer during dinner if on an evening safari.