Things to do in Cambodia

Every country has its outstanding and special attractions. Goway has selected its Top 9 things to do in Cambodia (not in any particular order) for you to enjoy on your visit to this destination. 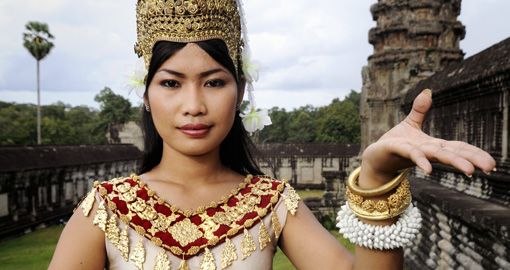 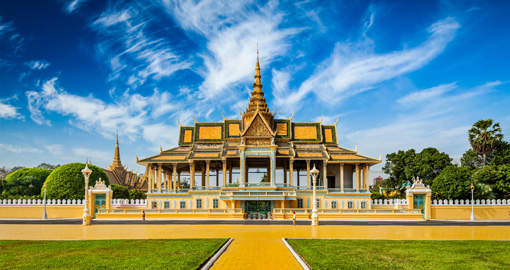 The Royal Palace is a complex of buildings which serve as the royal residence of the King of Cambodia. The public, on Cambodia tours, is allowed into a large part of it as it contains many interesting treasures. It is divided into 4 main areas. This includes the Silver Pagoda which houses many national treasures such as gold and jewelled Buddha statues. One outstanding statue is a small crystal Buddha known as the Emerald Buddha. Another is the near-life-size Maitreya Buddha encrusted with 9,584 diamonds. Another area is the Throne Hall where the king's generals and royal officials once carried out their duties. It is still in use today as a place for religious and royal ceremonies such as coronations and royal weddings. It contains three royal thrones (one is more western style and the other two, traditional) and golden busts of Cambodians kings and queens. The Moonlight Pavilion is an open-air pavilion that serves as a stage for Khmer classical dance in the past and today. 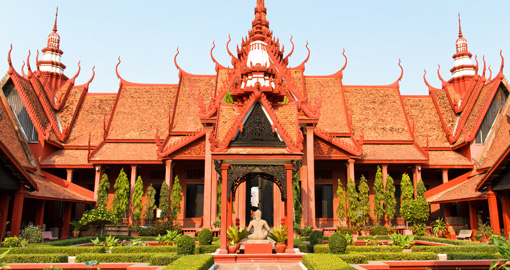 This museum in Phnom Penh is home to the world’s best collection of Khmer sculptures to be enjoyed on trips to Cambodia. The Khmer Empire existed from the 9th Century to the 14th Century. The museum also contains displays of pottery and bronzes dating from the 4th to 14th Centuries as well as more recent works including a beautiful wooden royal barge. Overall, the National Museum’s collection includes over 14,000 items ranging from prehistoric times to periods before, during and after the Khmer Empire. 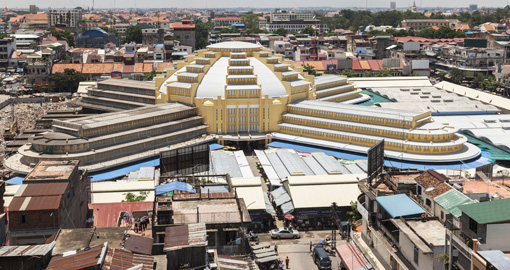 The Russian Market has no Russian merchandise. This is the best place for foreigners on trips to Cambodia to buy souvenirs. You can get lost in the warren of stalls. Merchandise includes clothes, shoes, CDs, DVDs and jewellery as well as wood carvings, fabrics and T-shirts. The Central Market is a place where you will find everything from jewellery to food plus electronics and watches. It is a fascinating Market to wander around but be prepared to negotiate hard as prices here are higher than they should be. 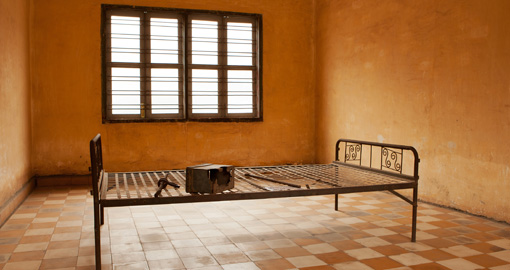 This is a genocide museum where during the Khmer Rouge regime during its rule of the country from 1975 to 1979. It was a detention and interrogation centre which was formerly a school. Thousands of Cambodians were ruthlessly imprisoned, tortured and killed. Of the 14,000 people known to have been incarcerated here, only seven were found alive at the end. At any one time, 1500 people were held here. There are many rooms which show you how the prisoners were living together with photographs from the times. Additionally, documentary film screenings take place throughout the day. 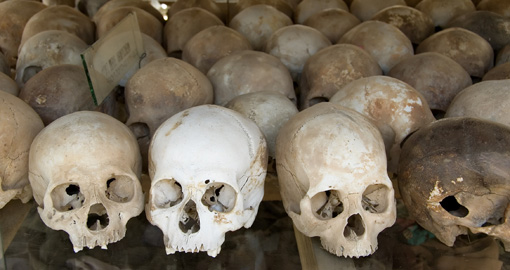 There are a number of sites where Cambodians were exterminated, many transported from the Tuol Sleng prison. These Killing Fields are located about half an hour outside Phnom Penh. It was here that mass killings took place. The name was coined by a Cambodian journalist after his escape from the regime. 17,000 civilians were killed and buried here. There are a number of mass graves to be viewed. 43 of the 129 communal graves here have been left untouched. There is also a building which contains thousands of skulls of the victims which were exhumed from the graves. It should be noted that, while oba Cambodia tour, both the Killing Fields and the Tuol sleng Museum are disturbing. 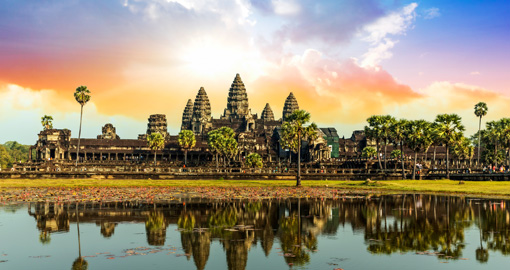 This is an archaeological site that needs plenty of time to really explore, 2 to 3 days to cover all aspects. However, even a half day will allow you to enjoy the treasures to be found here. Angkor Wat literally means, “City of Temples” and is a UNESCO World Heritage Site. It is located just north of the city of Siem Reap. It was an ancient city as well as a temple complex and the centre of the Khmer civilization which once ruled South East Asia from the 9th to the 13th Century. It was neglected and was covered in the jungle which had overgrown most of the complex and it wasn’t until 1860 that a French explorer came across it and rediscovered it. The construction of Angkor Wat involved 6000 elephants and 300,000 workers. 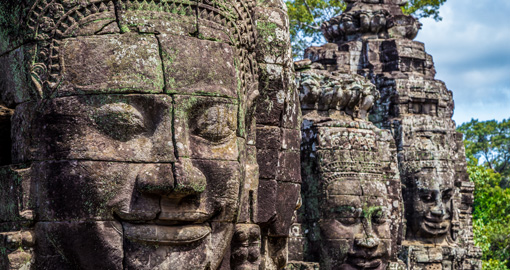 The main sites on Angkor Wat tours are Angkor Wat, the immense main temple, Angkor Thom, once a royal city complete with a moat and surrounding walls, Bayon Temple in Angkor Thom with its 11,000 bas-reliefs with stone faces and depictions of historical events and scenes from the everyday life of the Khmers carved on many of them, Ta Promh, a temple complex that fascinates many people because it is still, for the most part, covered in jungle vines which envelop the buildings, Banteay Srei which dates back to 967 AD. The name means, “Citadel of the Women” because of the delicacy of the pink stone carvings indicating that the work was possibly done by women and Preah Khan, one of the largest sites of the Angkor Wat complex with many trees and vines growing up around the ruins. 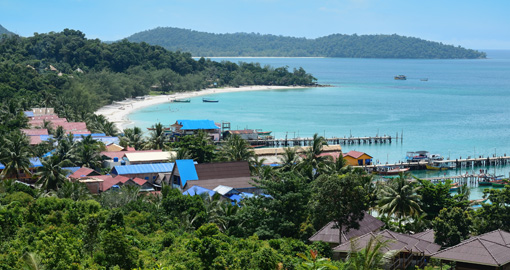 This seaside resort and the port town are around four hours by car from Phnom Penh. Its beaches make a great spot for relaxation and for water sports. There are several decent hotels to choose from each with its own private beach. The main reason to visit Sihanoukville is the beaches. They are not as crowded as many of those in Thailand. Ochheuteal Beach is the most developed tourist beach in Sihanoukville, popular with western tourists and locals. There are numerous hotels, guest houses and restaurants. Its growing nightlife makes it one of the party beaches of South East Asia. 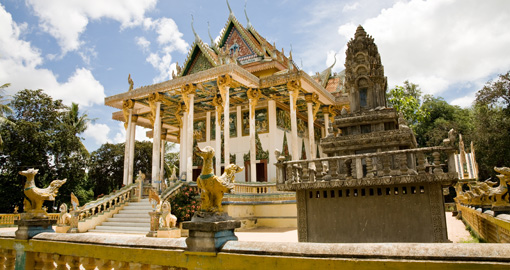 Battambang is Cambodia's second largest city which will be found interesting on Cambodian tours. French Colonial architecture is a notable aspect of the city, with some of the best-preserved examples in the country. It has a number of boutique hotels, cafés and the lush surrounding countryside is ideal for excursions such as to Kamping Puoy Lake sandwiched between two mountains and numerous temples such as Baset Temple built during the reign of King Suryavarman I (1002–1050) and located on a hill at Baset village 15 kilometres/9 miles away from Battambang together with Prasat Banan, another from the same period. 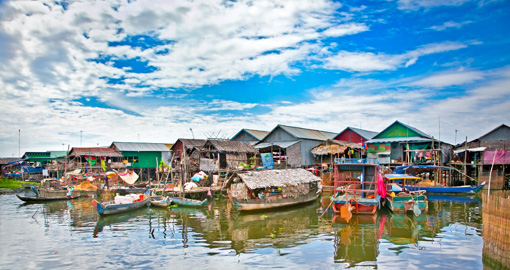 This lake is the largest lake in South East Asia and changes in size and dimension every wet season. During the wet season, the water of the Mekong River becomes so powerful, that it reverses the flow of the Tonle Sap River and pushes the surplus of rainwater back into the Tonle Sap Lake. This transforms the lake into a huge natural water reservoir. With the continuous change in the water level, the people who live on the lake have to move their houses away when the water level goes down. Whole villages including schools, shops, churches and pig farms are getting pulled away to a place where the water is still high enough to float. A cruise on the lake to see the daily life of the inhabitants will take you past villages with floating houses and boats which women paddle laden with fruit, flowers and other produce.