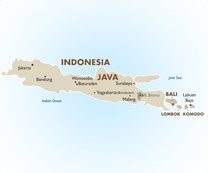 Indonesia, the world’s largest archipelago, is located between mainland Southeast Asia and Australia in the Indian and Pacific oceans. Spanning a total land area of 1,904,569 square kilometres (741,052 square miles), Indonesia is made up of approximately 17,504 islands, 6000 of which are populated. The total population of the country as of 2011 is 252,164,800, making it the fourth most populated country in the world after China, India and the United States.

With so many islands, it is not surprising that many geographical features are found throughout the country. Fertile rice lands are found on Java and Bali which is one of the best island resorts in the world. There are rainforests in Sumatra, Kalimantan and Sulawesi as well as savannah grasslands in the Nusatenggara Islands. Some of the larger islands like Sumatra and Java have large mountain ranges. The islands are located on two continental shelves which have resulted in many of the mountains being volcanic, Java for example houses fifty active volcanoes.

At Goway we believe that a well-informed traveller is a safer traveller. With this in mind, we have compiled an easy-to-navigate travel information section dedicated to Indonesia.

Learn about the history and culture of Indonesia, the must-try food and drink, and what to pack in your suitcase. Read about Indonesia's nature and wildlife, weather and geography, along with 'Country Quickfacts' compiled by our travel experts. Our globetrotting tips, as well as our visa and health information will help ensure you're properly prepared for a safe and enjoyable trip. The only way you could possibly learn more is by embarking on your journey and discovering Indonesia for yourself. Start exploring… book one of our Indonesia tours today!

Book your Indonesia tour with Goway!

ASIA by Goway is an exclusive division that specializes in planning and organizing Indonesia tours, vacations and experiences. Choose from a simple city stopover, a romantic island stay,  a stay of distinction, an independent travel module, and much more. We want to be your first choice when next you go globetrotting to Indonesia.