Things to do in Japan

Every country has its outstanding and special attractions. Goway has selected its top 14 things to do in Japan (not in any particular order) for you to enjoy on your visit to this destination. 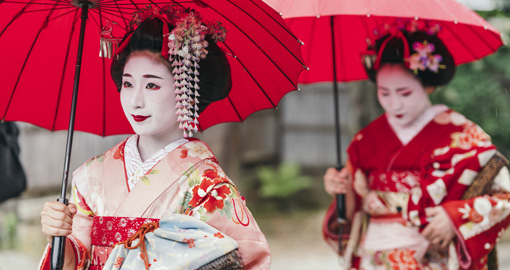 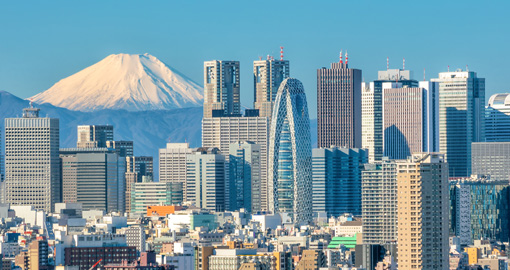 The Tokyo Skytree is a television broadcasting tower and a landmark in Tokyo. It is the tallest building in Japan and was the second tallest structure in the world at the time of its completion. This is a building from the top of which you can have a panoramic bird’s eye view of Tokyo. It is 634 metres/2080 feet tall and its two observation platforms are at a height of 350 and 450 metres/1148 and 1476 feet. Due to the Skytree’s central location, the observation platforms offer an amazing view of the city and one can, on a Japanese vacation, when visibility allows, even see Mount Fuji in the distance. A large shopping complex with an aquarium is located at its base. 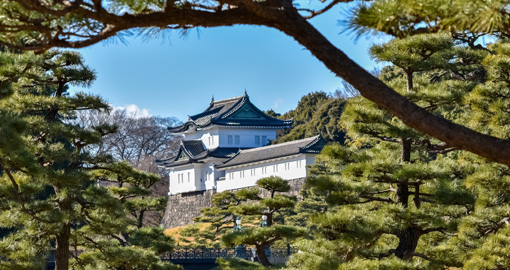 This is the home of the Emperor and Empress of Japan. Surprisingly, the palace is situated in the very heart of the city and is an oasis of tranquility in the midst of the hustle and bustle of Tokyo. This castle-like building is surrounded by moats, tree-filled gardens and impressive stone walls. Unfortunately, you can only visit the inner palace grounds two days a year on Japan tours. However, the attractive Imperial Palace East Garden and Outer Garden which are a part of the palace area are open to the public. The large plaza in front of the Imperial Palace is where visitors can view the Nijubashi, two bridges that form an entrance to the inner palace grounds. 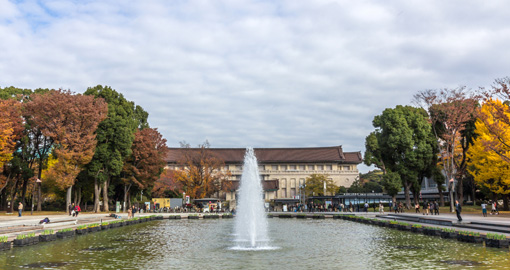 This park houses a number of the most important museums and art galleries in the city. They include the Tokyo National Museum with its large collection of national cultural treasures of around 100,000 objects from early Japanese times to the present day such as Buddhist statues, calligraphy, tea ceremony art, swords, armour, and pottery. The National Science Museum houses fascinating exhibits including some on space exploration. The National Museum of Western Art houses an extensive collection of Western art and the Tokyo Metropolitan Art Museum has a collection of works spread over many periods. Another small cultural gem is the Shitamachi Museum which provides a look at Japanese in the early 20th century with re-created houses and stores and cultural artifacts. Ueno has a zoo containing more than 300 animals. 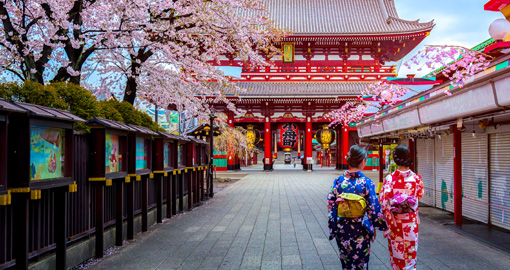 This is an old traditional district. Asakusa was once Tokyo's largest pleasure district filled with gangsters, geisha, courtesans, writers, artists, actors and beggars. The main attraction today in this colourful neighbourhood is the Sensoji Buddhist Temple also known as the Asakusa Kannon Temple originally built in the 7th Century and Tokyo's oldest and most visited temple. It is an active temple and always busy. From the temple, you can explore the neighbourhood, especially the shopping street called Nakamise. This is a street market with many stalls selling everything from snacks to typical Japanese souvenirs. There are also boutique-style shops in this area which sell more upscale merchandise.

This is a recommended experience on a Japanese vacation. This Tokyo fish market is an enormous place and the largest seafood market in the world. It serves at least 50,000 buyers and sellers daily. The outer market consists of a number of small retail shops and restaurants situated in narrow lanes. Here you will find all kinds of food-related goods and fresh seafood and other produce for sale. You may chance on a tuna auction which is fun to watch. 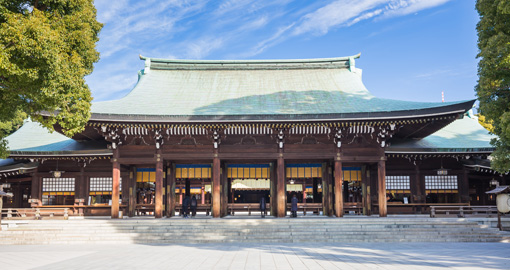 In the Harajuku district, you will find the renowned and popular Meiji Shrine which was built in 1920 and dedicated to the first modern Emperor and Empress of Japan at that time. Next to it is a spacious park and gladed forest with attractive paths along which to stroll, an oasis in the middle of this vast city. You can, if you wish, take part in typical Shinto (a branch of Buddhism activities) such as making offerings in the main hall, or writing a wish on an ema (a small plaque) which you subsequently hang up in the shrine. You may be fortunate to see a traditional wedding ceremony take place on the grounds of the shrine. The whole wedding party is often dressed in traditional costumes. These ceremonies are a regular occurrence. 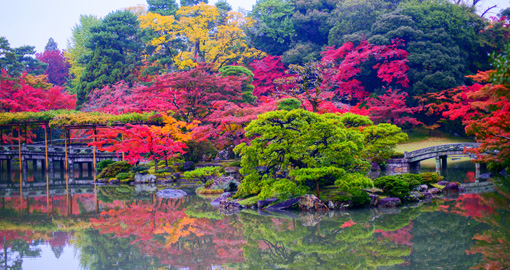 The Kyoto Imperial Palace used to be the residence of Japan's Imperial Family until 1868. It is located in Kyoto Imperial Park, an attractive park in the centre of the city. The palace complex is enclosed by long walls and consists of several gates, halls and gardens. The current Imperial Palace was reconstructed in 1855 after it was burnt down. It is now used for enthronement ceremonies. The palace grounds can be entered without any prior arrangements on Japan tours (although tours in English are available). None of the buildings can be entered. There are other historical sites within Kyoto Imperial Park. These include the Kaninnomiya Mansion, a former residence of court nobles the famous Itsukushima Shrine on a small island in a pond. 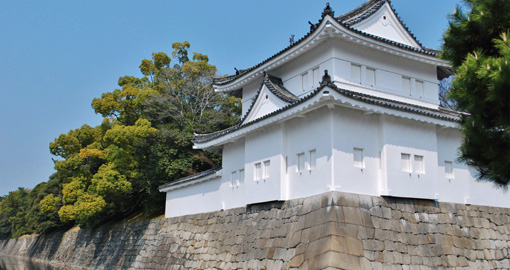 Nijo Castle was built in 1603 as the residence of the first shogun of the Edo Period (1603-1867). Its palace buildings are arguably the best surviving examples of castle palace architecture from Japan's feudal era. The castle has been designated a UNESCO World Heritage Site. The entire castle grounds are surrounded by stone walls and moats and can be divided into three areas, the Honmaru (main circle of defence), the Ninomaru (secondary circle of defence which served as the residence and office of the shogun during his visits to Kyoto) and some gardens that encircle the Honmaru and Ninomaru. 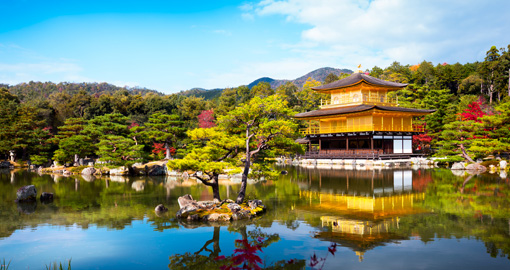 Kinkakuji, the Golden Pavilion, is a Zen temple whose top two floors are completely covered in gold leaf. It is an impressive structure built overlooking a large pond which reflects a mirror image of the temple. The gardens offer a few places of interest including a pond that is said to never dry up and statues that people throw coins at for luck. Ginkakuji, the Silver Pavilion, is also a Zen temple. In 1482, shogun Ashikaga Yoshimasa built his retirement villa on the grounds of today's temple. The villa was converted into a Zen temple after his death. You can walk on the grounds along a circular route from which the gardens and buildings can be viewed. 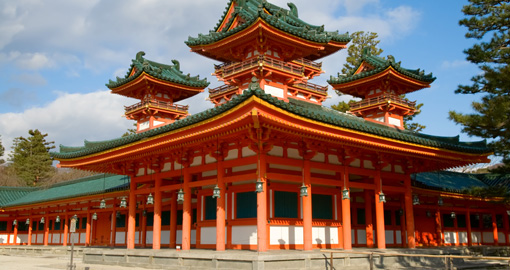 The Heian Shrine dates back just over a hundred years and was built on the occasion of the 1100th anniversary of the capital's foundation in Kyoto dedicated to the spirits of the first and last emperors who reigned in the city. The shrine grounds are very spacious and the main buildings are a partial replica of the original Imperial Palace from the Heian Period. The garden's most striking feature is its many weeping cherry trees making the garden one of the best places to see cherry blossom in Kyoto. Occasionally, the shrine's court is used for special events such as the Jidai Festival each year on October 22, the anniversary of the foundation of Kyoto. The festival's main event is a parade of people in costumes from different periods of Japanese history that leads from the Kyoto Imperial Palace to the Heian Shrine. 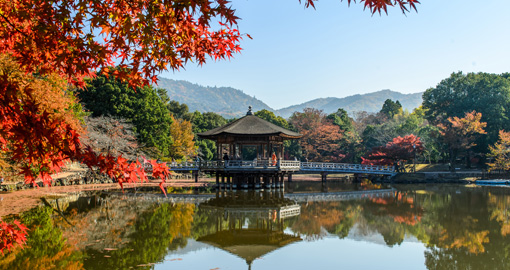 This was Japan's first permanent capital established in the year 710 AD. Nara is located less than one hour from Kyoto. It is full of historic treasures including some of Japan's oldest and largest temples. Todaiji (Great Eastern Temple) is one of Japan's most famous and historically significant temples constructed in 752 Ad as the head temple of all Buddhist temples in Japan. Todaiji's main hall is the world's largest wooden building. This huge building houses one of Japan's largest bronze statues of Buddha which is 15 metres/49 feet tall. Several smaller Buddhist statues and models of the former and current buildings are also on display. Horyuji Temple was founded in 607 AD and is one of the country's oldest temples and contains the world's oldest surviving wooden structures. It was designated a World Heritage site. The temple grounds are spacious and separated into two main precincts. Nara Park is a large park and home to hundreds of freely roaming deer. These deer have become a symbol of the city and have been designated as a natural treasure. Nara's deer are surprisingly tame. 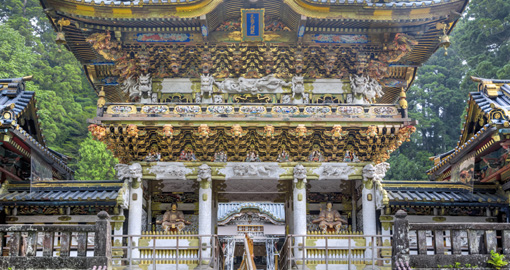 Nikko is a historical city located 140 kilometres/87 miles north of Tokyo. It has been a centre of Shinto and Buddhist worship for many centuries. The attractions on a Japanese vacation here are many and include mountain scenery, lakes, waterfalls and hot springs. However, the main attractions are some of the historic structures. These include the mausoleum of shogun Tokugawa Ieyasu who ruled Japan in the 16th Century. The Toshogu Shrine is a highly decorated shrine complex consisting of more than a dozen buildings set in a beautiful forest. Countless wood carvings and large amounts of gold leaf were used to decorate the buildings in a way not seen elsewhere in Japan. The Rinnoji Temple is Nikko's most important temple. It was founded by a Buddhist monk who introduced Buddhism to Nikko in the 8th Century. The main building houses large, gold-lacquered, wooden statues. The Kirifuri Waterfall is an impressive waterfall located just outside of Nikko. The fall colours in the area are wonderful from late October to early November. 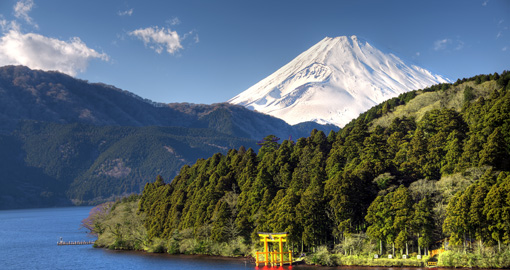 Something a little different on Japan tours would be a visit to Hakone Spa and nearby Mount Fuji. Hakone, a national park, is set amid beautiful mountains and located less than 100 kilometres/62 miles west of Tokyo. It is a mountainous region known for its hot springs resorts and Mt. Fuji views. Attractions are Lake Ashi which can be toured by boat, the boiling sulphur springs of Owakudani Valley, the Hakone Ropeway cable car and Hakone Open Air Museum with its displays of a wide variety of sculptures and artwork within a beautiful parkland setting. Hakone offers a cable car ride up to Mt Komagatake, the best site for providing magnificent views of Mount Fiji and Lake Ashi. As well, Hakone offers various boat cruises along Lake Ashi and hikes through natural surroundings. 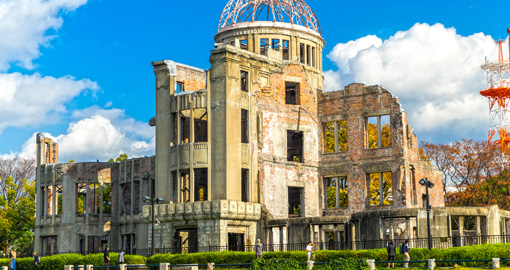 Hiroshima is known for when the first atomic bomb was dropped on the city in 1945. It obliterated nearly everything. Great efforts were taken to rebuild the city including destroyed monuments of Hiroshima's historical heritage such as Hiroshima Castle and Shukkeien Garden. In the centre of the city, a large park was built and given a name that would reflect the aspirations of the re-born city: Peace Memorial Park. A visit here on a Japanese vacation will be rewarding. One of Peace Memorial Park’s features is the Atomic Bomb Dome which can be seen on Hiroshima tours. With only the partially-standing structure and skeletal ruins left after the bomb attack, this domed building is now listed on the UNESCO World Heritage Site.