Things to do in Korea

Every country has its outstanding and special attractions. Goway has selected its Top 15 things to do in Korea (not in any particular order) for you to enjoy on your visit to this destination. 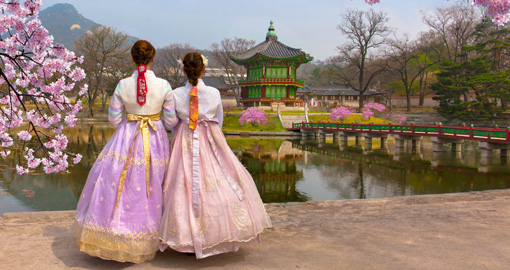 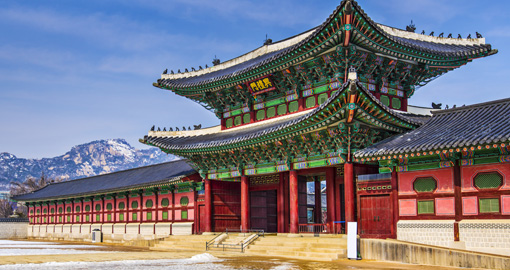 Gyeongbokgung Palace was the principal royal palace of the Joseon Dynasty (1392-1910) built-in 1395. It is the largest and most attractive of the Five Grand Palaces built at that time. Although the premises were once destroyed by fire in the 16th Century, they were later restored in the 19th Century including all 7700 rooms. During the Japanese invasion, it was partially destroyed but the palace once again is being restored. The pavilion and the pond have remained totally intact. Inside the grounds of the palace are the National Palace Museum of Korea and the National Folk Museum. 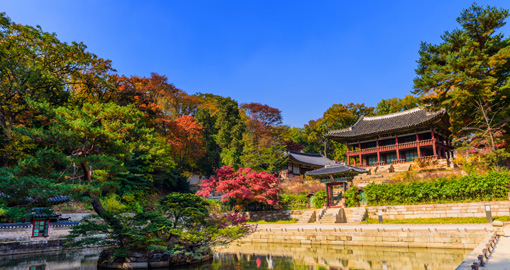 Changdeokgung Palace was the favoured residence of many Joseon Dynasty kings and was the longest-serving royal residential palace and the second largest. It is well-preserved and still has many of its original features. An attraction of the palace is how its buildings blend into the surrounding landscape. The palace's rear garden, called Huwon, is considered an excellent example of Korean garden design and is the only rear garden of any Korean palace. Changdeokgung served as the main royal residence of Seoul for 270 years and the last emperor of Korea who reigned from 1907 to 1910, lived here until his death in 1926. 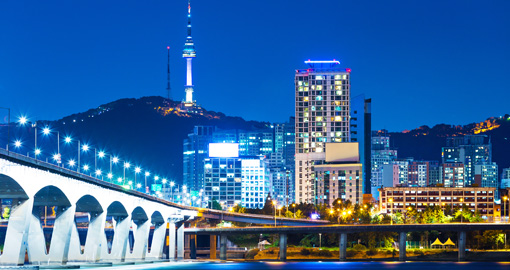 Also known as Namsan Seoul Tower, it is a landmark in the centre of Seoul and is located on a small mountain called Namsan. Combined with its own height and the height of the mountain, it is one of the tallest towers in the Orient. Built-in 1971, it serves as both a communication and an observation tower with 360-degree panoramic views of Seoul. Apart from having an observation deck, it contains a Teddy Bear Museum which includes: teddy bears from the past, present, and the future, gift shops, a café and two restaurants. To reach the tower there is a cable car, at night it is illuminated and can be seen from all over the city. There is a revolving restaurant. 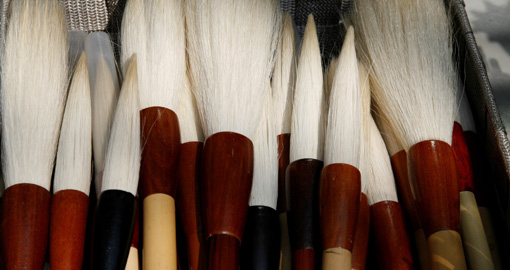 Insa-dong is a very special street in the centre of the city known for its traditional culture and crafts. The stores in Insa-dong specialize in a wide variety of goods that can only be purchased in Korea such as traditional clothing, traditional paper, traditional teas, pottery, and folk crafts. It is 700 metres/90 yards long and has a history dating back to the early days of the Joseon Dynasty (1392-1910). It was a place of study for painters and the area is still a centre for painters, craftsmen, and art lovers. The most popular items sold here are Korean ceramics ranging in price from hundreds of dollars to thousands of dollars. Other items sold in Insa-dong include earthenware, calligraphy materials, antique furniture, teas and souvenirs. Vehicles are not allowed on the street during weekends so that visitors can stroll. 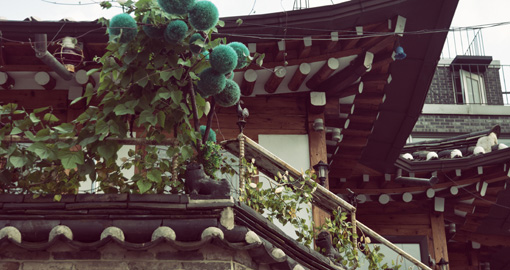 This is another unique area that lies close to the palaces and is where the aristocratic families of the Joseon Dynasty lived. It is well maintained with plenty of character and is where you will find some attractive Korean traditional houses. It now appeals to artistic types with chic galleries (as many as 40 different ones), trendy boutiques restaurants and European-style cafes. For anyone interested in shopping, the area offers an array of colourful accessories shops. 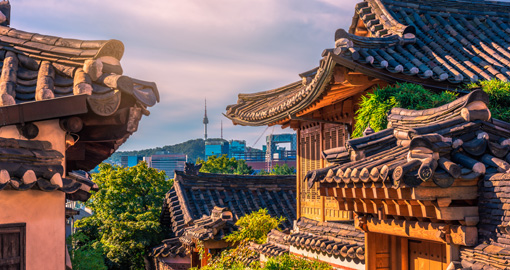 Bukchon Hanok Village is home to hundreds of traditional houses that line the streets, which are called hanok dating back to the Joseon Dynasty. The name Bukchon, translates to “northern village," as the neighbourhood lies north of two significant Seoul landmarks. Many of these hanoks function as cultural centres, guesthouses, restaurants and tea houses allowing visitors an opportunity to experience and learn about traditional Korean culture. The village is preserved to show off 600 years of Seoul’s history. Bukchon was not created for tourists and is a residential village inhabited by locals. 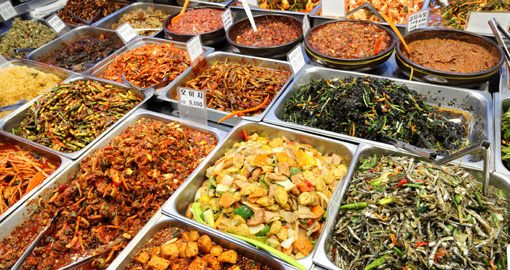 Namdaemun refers to the southern gate of the four gates leading into the castle town during the Joseon Dynasty. As the oldest remaining wooden structure in Seoul and National Treasure No. 1, it symbolizes the history of Seoul from the past to the present and is cherished by Koreans everywhere. The market is the largest traditional market in Korea which mainly sells crops, fruits, and also electronics, traditional crafts and textile merchandise. Everything is displayed in humble stores and stalls. Even though it can be crowded and hectic, visitors visit the market to experience a Korean traditional marketplace and/or purchase a variety of goods at cheap prices. 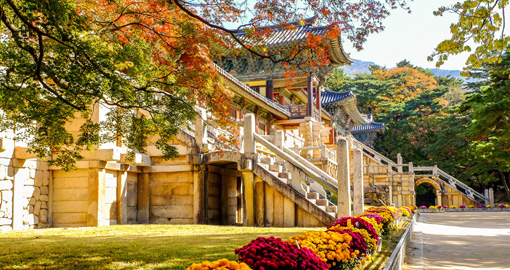 Bulguksa Temple was built in 528 Ad during the Silla Kingdom period Kingdom (57 BC-AD 935). It has undergone many renovations over time and has a long history. Today, it is home to many important cultural relics and national treasures such as the stone traditional Korean-style Dabotap Pagoda and Seokgatap Pagoda, the Yeonhwa-gyo and Chilbo-gyo Bridges which lead to the temple, the Golden Seated Vairocana Buddhist Figure and much more. The temple is classified as Historic and Scenic Site No. 1 by the South Korean government as it is considered a masterpiece of the golden age of Buddhist art in the Silla kingdom period. 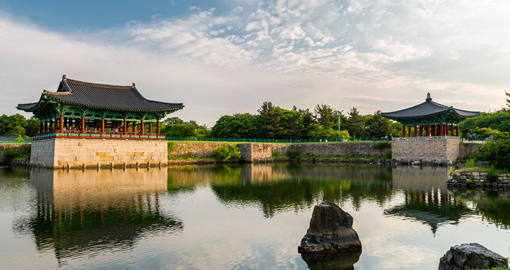 Anapji means Goose & Duck Lake and is an artificial pond in Gyeongju National Park. It was once part of the royal palace complex of the ancient Silla Dynasty within the walls of the royal palace. A 1974 excavation revealed three underwater mounds indicating that the pond used to have artificial islands within it. Upon draining the pond, several artifacts were found including gold and bronze bowls, gilt ornaments, various jewellery and mirrors, all of which are on display in the Gyeongju National Museum. The area around the pond is filled with lotus flowers which are spectacular. 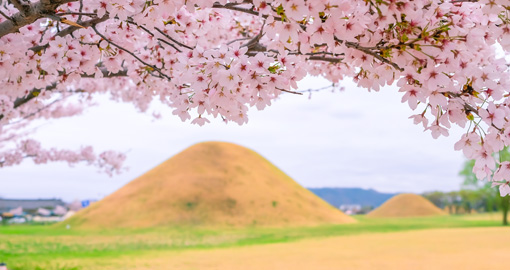 The third is Gobungun which is a cluster of old graves where archaeologists have discovered a number of invaluable relics and historic items. The fourth, the Hwangnyongsa Area, is the former site of the Hwangnyongsa Temple and the Bunhwangsa Stone Pagoda. The Gyeongju Historic Area has a total of 52 designated cultural assets that are registered as World Cultural Heritages. 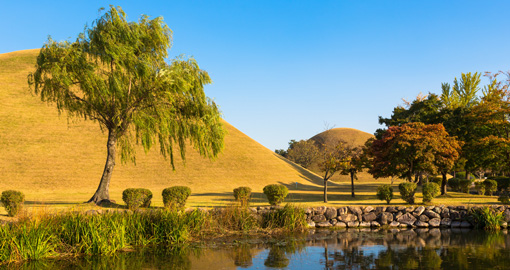 Gyeongju is famous for its large number of grassy, royal burial mounds. The tombs are known as Tumuli. The walled-off Tumuli Park contains over two dozen tombs; one of them is Cheonmachong the only tomb in Korea that you can actually enter. Its former inhabitant is not really known but is believed to be a 6th or 7th Century AD king whose many horse-related implements gave rise to the name which means “Heavenly Horse Tomb”. Excavated in 1973, it produced over 12,000 artifacts of which many went to the Gyeongju Museum but some decorate the inner walls of the tomb. Elsewhere in the complex is the large tomb of King Michu who reigned from 262 to 284 AD. One other tomb of note is the double-humped Hwangnam Daechong which was certainly the resting place of a king and queen. 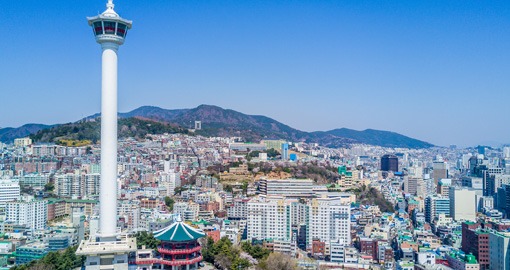 Busan Tower is a symbol of Busan and is 120 metres/400 feet high. The top of the tower is modelled after the Dabotap Pagoda in Bulguksa Temple in Gyeongju. It was built in 1973 purely for its panoramic views of Busan and its port from its observation deck. The views at night are particularly spectacular. 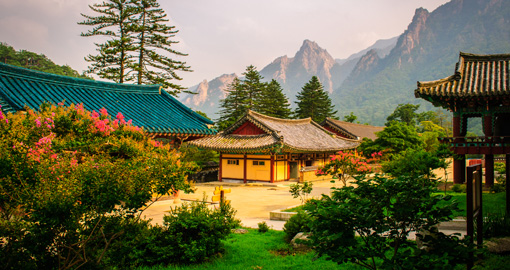 This is one of Korea’s most beautiful national parks. With its highest point Daecheongbong Peak located at 1,708 metres/5550 feet, Seoraksan Mountain is one of the most beautiful mountains in Korea offering: a variety of colourful flowers in spring, refreshing clear water streams in summer, vibrant fall colours, and a snow-covered landscape in winter. It consists of oddly-shaped rock formations, dense forests, abundant wildlife, hot springs and ancient Silla-era temples. The peak season is July and August plus mid-October when visitors see the changing colours of the leaves. 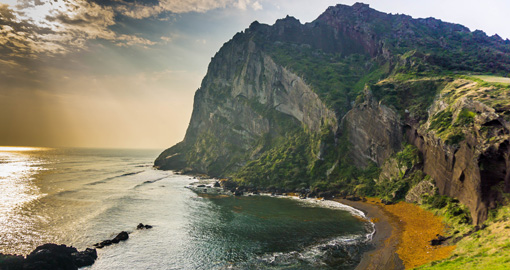 Jeju is Korea’s largest island also known as the “Island of the Gods”, and is a popular vacation destination due to its beautiful beaches, lush countryside and hotels designed for rest and relaxation. For active sightseeing, one can hike up to Korea’s highest mountain, Hallasan or climb the Seongsan Ilchul-bong volcanic cone, which rises straight out of the sea and watch the sunrise from the ridge of the crater. Any stroll will not be far from the sea, the jagged coastlines and narrow lanes are dotted with cottage-style homes made from black lava rock as well as picturesque waterfalls. 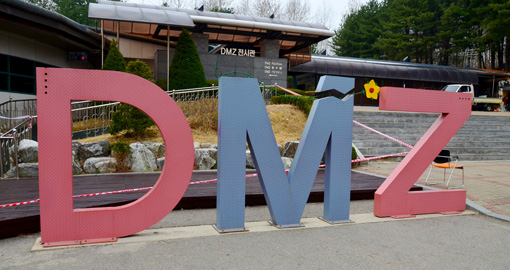 The Korean Demilitarized Zone is where South Korean President and North Korean leader Kim Jong Un met. It spreads right across the dividing line between North and South Korea and is 250 kilometres/160 miles long. It is one of the world’s most heavily militarized borders, however, it has over 1 million visitors every year, being 4 kilometres/2.5-miles wide. The area has military facilities including 4 infiltration tunnels. Visitors can go inside the 3rd infiltration tunnel made by North Korea during a tour. The DMZ is totally safe and a North Korean propaganda village can be viewed from an observatory.