Things to do in Laos

Every country has its outstanding and special attractions. Goway has selected its Top 12 things to do in Laos (not in any particular order) for you to enjoy on your visit to this destination 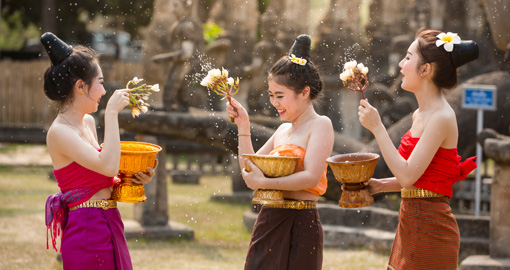 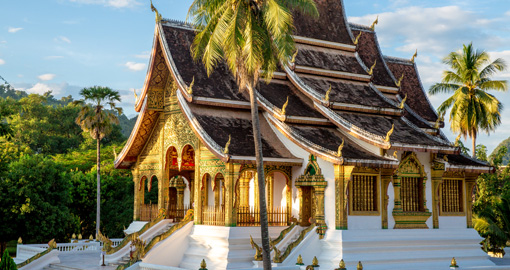 The Royal Palace was built in 1904 during the French Colonial era. The site was chosen so that official visitors to Luang Prabang could disembark from their river voyages directly below the palace and be received there. In 1975, the monarchy was overthrown by the communists and the palace was converted into a national museum with some rooms preserved as they were. The architecture of the building is a mix of traditional Lao and French Beaux Arts styles. Above the entrance is a three-headed elephant sheltered by the sacred white parasol, the symbol of the Lao monarchy. There are a variety of royal religious objects on display in the Entrance Hall. In a separate building is a display of the Royal Palace car collection. 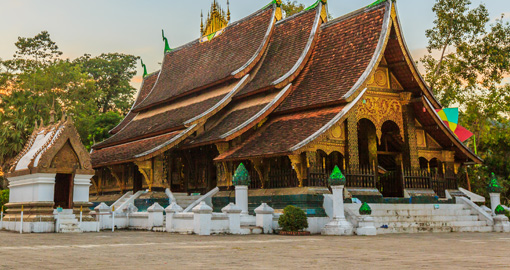 This is a Buddhist temple and one of the most important Lao monasteries. There are over twenty structures on the grounds including shrines, pavilions and residences plus its gardens. Laos is known for its outstanding Buddhist temples and Wat Xieng Thong is one of the best with intricately carved walls, rare Buddhist deities and a 12 metre/39-foot high funeral carriage which was once carried through the streets of Luang Prabang containing royal ashes. The building has carved gilded wooden doors depicting scenes from Buddha's life. Also known as the “Golden Tree Monastery”, it is famous for the coronation of Lao kings and as an important place for annual festivities. The original temple was created in 1560 and much-needed repairs took place during the 1960s. 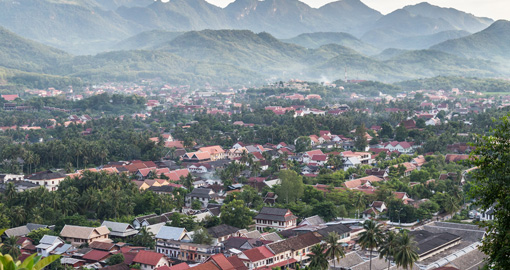 Mount Phousi is almost in the centre of the town and rises above the downtown area. This small mountain is located on the river peninsula between the Mekong and the Nam Khan Rivers. From the top, you have a panoramic view of Luang Prabang and the surrounding countryside. One truly amazing thing to do here is to watch the sunset as it goes down on the majestic Mekong River. On top of the mountain are a small Buddhist temple and a golden stupa. On the way to reach the top of Mount Phousi, you can see many golden-coloured Buddha statues displaying different postures such as meditation, almsgiving and calling for rain. About halfway up to the top is a small grotto shrine called Wat Tham Phousi with a number of Buddha images and a big-bellied statue and a reclining Buddha image. 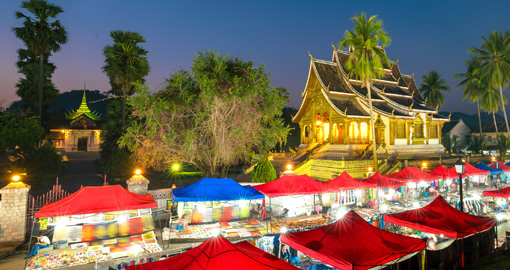 This exceptional night market should not be missed. It takes place in the town centre every late afternoon until late in the evening. The main street is closed off to vehicles to allow pedestrians to shop at leisure. The merchandise is sold by local hill tribe people who come into Luang Prabang from the nearby countryside. It includes ceramics, bamboo, lamps, blankets, bed covers, handicrafts, bags, purses, shirts and silk scarves as well as typical souvenirs for visitors. Apart from the market vendors, shophouses and hotels that line the street offer souvenirs, Lao coffee beans, homemade whiskeys, books and beer.

The Parade of the Monks, Luang Prabang 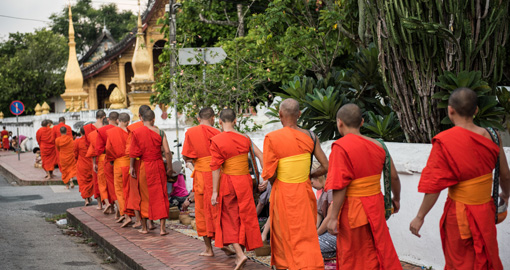 One highlight in Luang Prabang is watching the parade of a long line of saffron-clad monks who each morning walk the length of the main street accepting food and provisions from the locals. This is a highly revered Lao tradition and visitors are encouraged to watch or even get involved. This takes place at sunrise beginning on the main street before heading down the side streets. You should buy your offerings (usual food) in advance and arrive with plenty of time to spare as it is considered very offensive to disrupt the ceremony once it has begun. Do as the locals do by kneeling down ready to give your offering to the monks. The most common gifts include rice, fresh fruit and traditional sweet snacks. The idea of giving is for the Buddhist monks to make merit and also to collect food for their one meal a day. 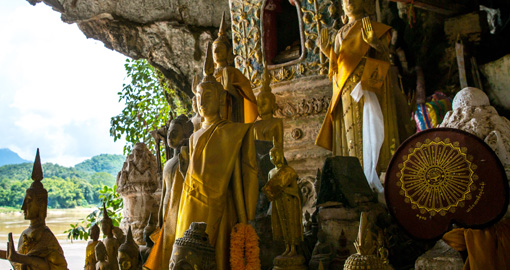 The Pak Ou Caves just outside of Luang Prabang are one of the most respected holy sites in Laos and have a long history. They are full of over 4,000 Buddha icons. The caves, a shrine to the river spirit and Lord Buddha are set in dramatic limestone cliffs along the Mekong River. There are two caves to visit both full of miniature Buddhist figures mostly made of wood. The upper cave is home to the majority of the Buddha statues and you will need to find your way in the darkness to the thousands of hidden icons. The statues are believed to have been left in the caves by local people for hundreds of years. The caves are a popular pilgrim site for locals. 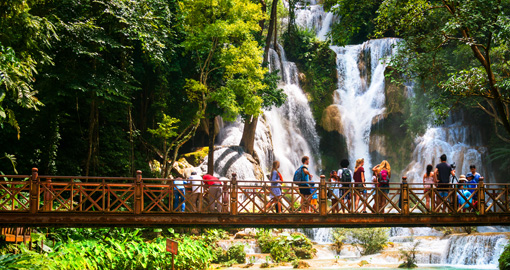 This is a waterfall not far from Luang Prabang. It is made up of three levels leading to a 50 metre/160-foot drop into spectacular blue pools before they flow downstream. The pools also make great swimming holes and are very popular with both tourists and locals. The pools also have cascades of cold water due to the shade given by the surrounding lush tropical jungle. 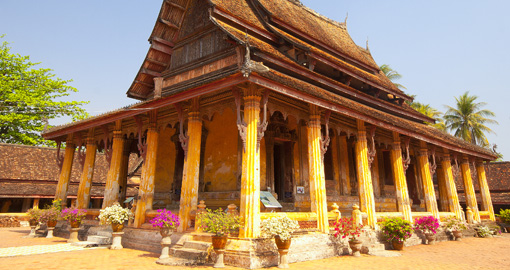 Wat Sisaket is a famous temple with beautiful architecture. It is known for its cloister wall which houses thousands of tiny Buddha images and rows of hundreds of seated Buddhas. These images mainly date from the 16th and 19th Centuries and are made from wood, stone and bronze. Early in the morning, many locals come here to pray and make merit as well as offer food to the monks. The temple is quite shady and is surrounded by tropical fruit trees. Among the many other interesting features are its lovely surrounding verandas, an ornate five-tiered roof, a drum tower, a small library building with a Burmese-style roof and the flowered ceiling of the ordination hall. 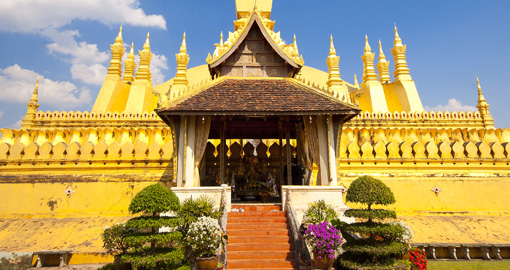 The Luang means Great Stupa and is a national symbol and also the most sacred monument in the country. From the outside, it looks like a fortress surrounded by high walls. Inside are two temples. The main stupa is covered with gold leaf and is fairly tall. The beautiful architecture is in Lao style. It was supposedly built in the third Century AD to house a breastbone of the Lord Buddha brought to Laos by an Indian missionary. However, the current structure was built in 1566. Every November when the Boun That Luang Festival is held in Vientiane, a large crowd comes to Vientiane from all over Laos and even neighbouring countries. The festival is considered the most important Buddhist celebration in Laos with many activities going on for three days and three nights. The main event is always held at That Luang when thousands of people come to pay respect. This colourful event includes parades, live music and religious ceremonies. 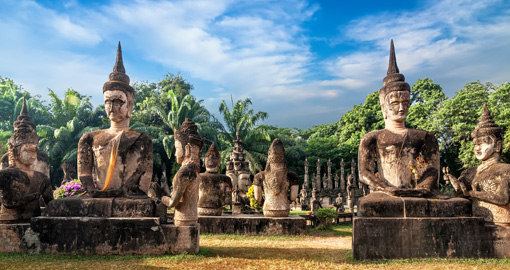 This is a sculpture park with more than 200 religious statues including a huge 40 metre130 foot high reclining Buddha image. The entrance is designed to look like a demon’s mouth with a stone ladder inside leading to a bird's eye view of the entire park. It was built in 1958 by a monk who studied both Buddhism and Hinduism and this explains why his there are some Hindu gods as well as demons and animals. The most outstanding ones include Indra, the king of Hindu gods riding a three-headed elephant, a four-armed deity sitting on a horse and an artistic deity with 12 faces and many hands. They are full of interesting details and interesting motifs.

The Plain of Jars 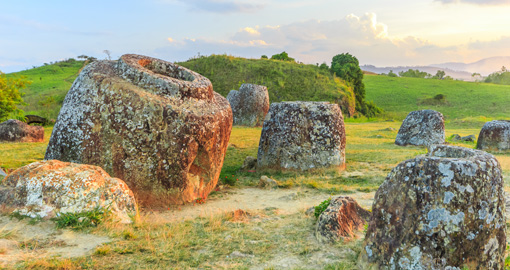 The Plain of Jars is considered the most distinctive and mysterious of all attractions in Laos. A large area around Phonsavan, the main city of Xieng Khouang Province is dotted with stone jars no one really understands why they are there. The jars were carved from both sandstone and granite in various sizes from very small to large. They are thought to be more than 2,000 years old. Legend has it that they were made to store rice wine while some believe they were for storing the dead. The three most popular ones are known as Site 1, 2 and 3. Site 1 is where the largest jar is located. Sites 2 and 3 offer picturesque views of farmland and villages as they sit on top of small hills.

Vieng Xai is a town in Hua Phan Province. The biggest attraction of the town is the caves which sit in a valley of fertile hills and limestone cliffs riddled with caves, several of which were used to shelter the Lao officers during the second Indo-China war in 1962/1973. Laos became caught up in the conflict between the US and the North Vietnamese. These caves were a “Hidden City” which supported around 20,000 people. During nine years of almost constant bombing, they sheltered in the caves and the surrounding jungle. Schools, hospitals and markets as well as government ministries, a radio station, a theatre and military barracks were all hidden in the caves.