Malaysia: Things to do

Every country has its outstanding and special attractions. Goway has selected its Top 13 things to do in Malaysia (not in any particular order) for you to enjoy on your visit to this destination. 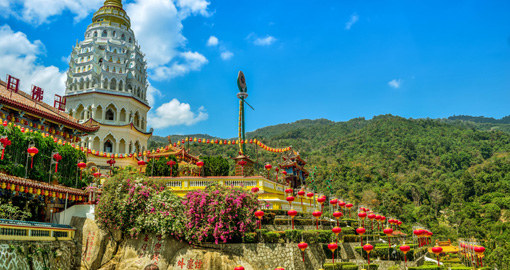 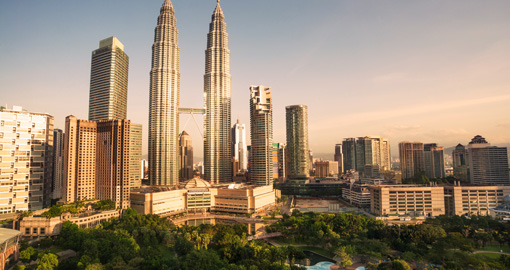 These impressive twin towers in Kuala Lumpur used to be the tallest building in the world but are still the tallest twin buildings. These 88-floor towers resemble silver rockets which actually resemble motifs found in Islamic art, a reflection of Malaysia’s Muslim religion. Each tower has five tiers representing the five pillars of Islam. The Petronas Twin Towers feature a sky bridge between the two towers on the 41st and 42nd floors. The observation deck is on the 86th floor, something recommended on Malaysia vacations. The towers look particularly impressive when illuminated at night. 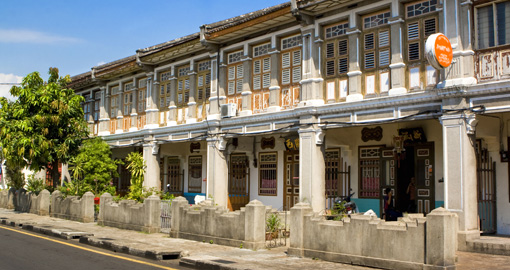 Named after Britain’s King George III, Georgetown is located in the north-east corner of Penang Island. Most of George Town’s population is of Chinese origin. Due to strict controls, George Town retains many of its colonial-era shop houses to this day. It is officially recognized as having a unique architectural and cultural presence without parallel anywhere in South East Asia. Most of George Town's heritage landmarks, including Fort Cornwallis, the City Hall, the High Court, St. George's Church and the Eastern & Oriental Hotel are located within a UNESCO World Heritage Site. The city's main Central Business District at Beach Street is home to banks built in various Art Deco- styles. Aside from colonial European architecture, a huge range of Asian architectural styles also exist throughout the city. George Town comes to life in the evenings when most of the locals head to the nearby street hawkers to have their meals and drinks. 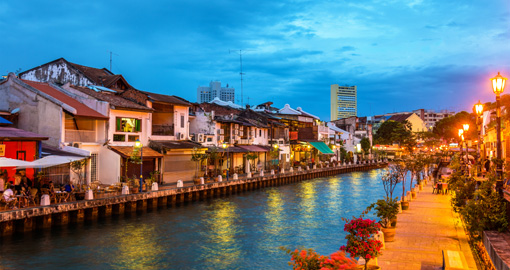 A unique destination on Malaysia vacations is Malacca, the capital city of the state of Malacca. Situated near the Strait of Malacca, the city was an important trading port once. A UNESCO World Heritage Site, Malacca is considered Malaysia’s most historic city. Under the rule of various empires throughout the centuries, including the Portuguese, Dutch, and British, Malacca features an interesting blend of Chinese and European influences. The most impressive relic from the Dutch period is the huge pink town hall, Stradthuys, built between 1641 and 1660. Located in the heart of the city, and believed to be the oldest Dutch building in Asia, it now features the Museum of History and Ethnographic. St. Paul’s Hill, located in the historic central area of Malacca, is home to ruins of St. Paul’s Church, built by the Portuguese over 400 years ago. The Cheng Hoon Teng Temple located in the old part of the city is the oldest Chinese temple in Malaysia, founded in 1646. 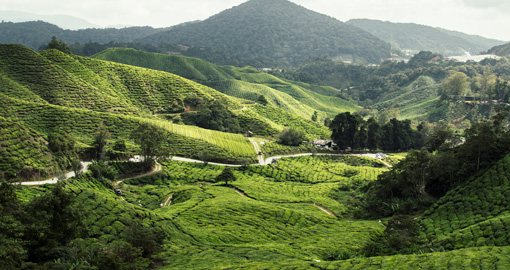 The Cameron Highlands is one of Malaysia’s largest hill stations, first developed by the British in the 1920s and created to get away from the summer heat as it offers low humidity. The attractions on a Malaysia tour in the Cameron Highlands include jungle walks, waterfalls, tours of tea plantations, beautiful gardens and wild flowers. Featuring a glimmer of its colonial heritage, the Cameron Highlands is an ideal spot for rest and relaxation on a Malaysia tour. It is renowned for its trails which take visitors through the forest to waterfalls and other tranquil spots. Apart from its jungle walks, it is also known for its tea plantations and visitors can book “tea factory” tours. You can also visit here a strawberry farm, a bee and insect farm and a mushroom farm. 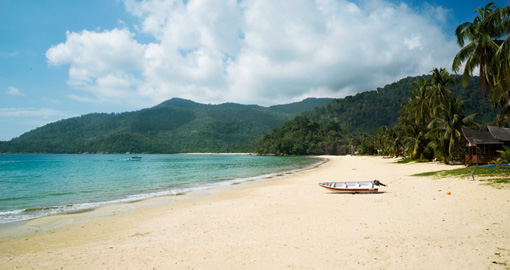 Malaysia’s best-known vacation destination, Langkawi is an archipelago of 99 islands in the Andaman Sea. The largest of the islands is Pulau Langkawi, the only other one inhabited island is the nearby Pulau Tuba. Pulau Langkawi is fringed with long, white beaches and with an interior of jungle covered hills and craggy mountain peaks. The most popular beaches are located on the west coast with a wide choice of restaurants and some of the best resort hotels in Langkawi while on a Malaysia vacation. 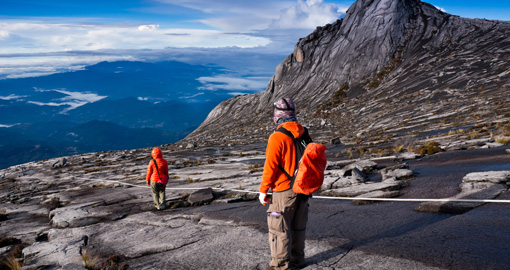 Mount Kinabalu is the highest mountain in Borneo with a summit height at 4095 metres/13,435 feet. It is known for its exceptional botanical and biological biodiversity with over 600 species of ferns, 320 species of birds and 100 mammalian species. Mount Kinabalu is known to be one of the most accessible mountains in the world. The main peak of the mountain can be climbed easily by a person in good physical condition and does not require mountaineering equipment although climbers must be accompanied by guides at all times. With some of the richest and most important biological sites in the world, Kinabalu National Park is one of Malaysia’s most popular tourist destinations. 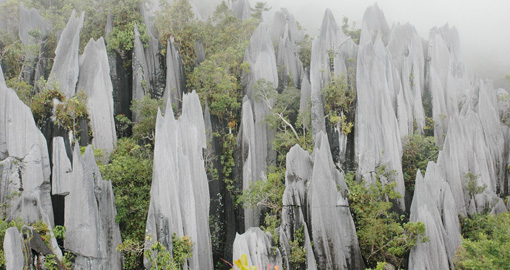 The Mulu National Park, located in Sarawak, Borneo is a combination of forests, caves, wildlife and outstanding karst stone formations. It is a UNESCO World Heritage site due to its unique scenery and extensive array of native plant and animal species. Some 3500 species of plants and 109 species of palm trees flourish here. The area provides protection for the wildlife as it includes a substantial area of Borneo’s primary tropical forest. There are enormous caves and vast cave networks together with rock pinnacles, cliffs, gorges, and it is home to Mount Mulu, Sarawak’s second highest mountain. The Sarawak Chamber is one of a few special caves. It is 700 metres/2300 feet long, 396 metres/1300 feet wide and around 70 metres/230 feet high. Clearwater Cave contains parts of one of the world's largest underground river systems and is believed to be the largest cave in the world. 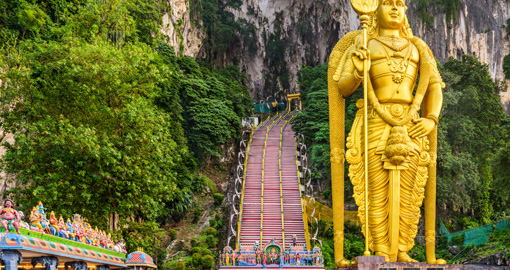 Batu Caves is one of Malaysia’s national treasures and holiest Hindu sites. It is a complex giant limestone cave located 13 kilometres/8 miles north of Kuala Lumpur. In late January or early February, hundreds of thousands of pilgrims converge on the caves. The three main caves that make up Batu Caves are most popular Hindu shrine outside of India. The highlight of the site is a giant statue of a Hindu god, reached by climbing 272 steps to the Cathedral Cave which has outstanding Hindu art. Monkeys also enjoy the site and can be seen playing there. 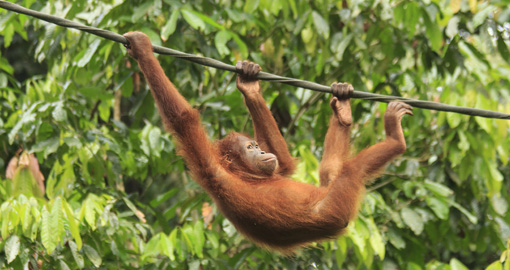 The Sepilok Forest Reserve is where, on Malaysia vacations, you find the Orang Utan Rehabilitation Centre for orphaned and injured orangutans who are eventually returned to forest life. In 2017, there were around 200 living in the reserve. At the outdoor nursery, a short walk from the feeding platform, you can watch orphaned toddlers at play. You can sit and watch them play and practice their swinging, just one of the skills they need to survive when they return to their rainforest home. It is better to get here early in the morning before they are fed and become sleepy. Feedings at the platforms are at 10 am and 3 pm and last 30 to 50 minutes. Tickets are valid for one day so you can see two feedings with the same ticket. Only around two to four of the population will feed at any one time. The morning feeding is always more crowded so if you want a quieter experience, try the afternoon. 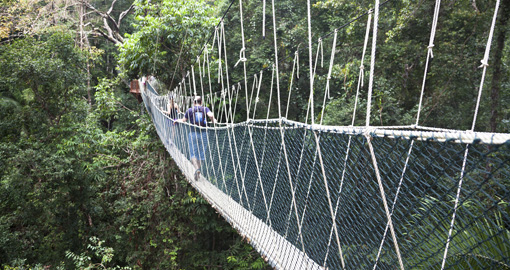 Taman Negara literally means “national park” in Malay and is one of the oldest tropical rainforests in the world. It features enormous trees, waterfalls, jungle treks of various durations and the world’s longest canopy walkways. Several trails enable the visitor to explore the forest without a guide. It is a haven for endangered species such as the Asian elephant, tigers, leopards and rhinos but numbers are low and sightings are very rare. You are more likely to see birds, small deer, lizards, snakes and perhaps a tapir. You can choose from a number of adventure activities such as canopy walk, night jungle trekking, rapid shooting and even tapir watching. Apart from dense rainforest jungle, mangroves and grasslands, there are endless stretches of beach. The Kampung Orang Asli, an aboriginal settlement, is one of the main attractions in Taman Negara. This is a group of people still living in a remote area. They are gentle people with dark skin and tight curly hair who live a nomadic lifestyle. During a visit to their villages, they will share with you how to use their bamboo hunting blowpipe and make fire. They speak their own language. 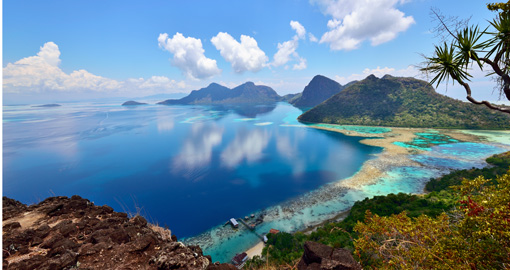 Located on the Celebes Sea, Sipadan is a diver’s paradise to be experienced on a Malaysia tour. It is Malaysia’s only oceanic island and was formed by living coral on top an extinct volcano cone. Because of its rich marine life, it’s one of the best diving spots in the world. Sipadan has more than 3000 species of fish and hundreds of different corals waiting to be explored. There are hawksbill and green turtles, manta rays, schools of barracudas and whale sharks. The island also has some nice sandy beaches.

Stay at a Longhouse in Malaysia 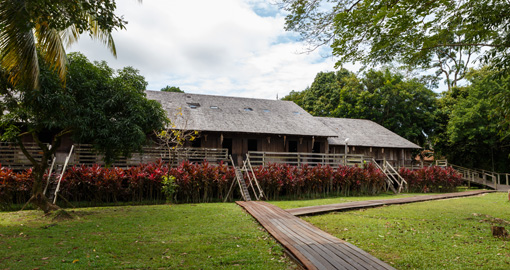 A unique experience in Malaysia is a visit to an Iban longhouse in Sarawak which gives a glimpse into the daily lives of indigenous people. Whichever Longhouse visit you choose, the further it is from the city the better. These people were originally headhunters. The concept of a longhouse is where families live together under one roof. The Iban people can be shy but offer a very warm welcome to outsiders. You will sleep in separate quarters but nothing fancy, sleeping on a mattress with a mosquito net. On arrival, after introductions, you will have dinner followed by a short performance of local dance and music. You can expect an invitation to join in. You will be shown around the longhouse and given small demonstrations of daily life. The evening usually includes tuak, a local rice whiskey. The next morning may include a short hike into the jungle, a tour of their garden and a chance to learn how to shoot the blowpipe gun. While not officially required, you can boost your welcome by bringing a bottle of spirits or some small gifts (not trinkets or souvenirs). Only a few members of the longhouse may speak English so you need to rely on your guide. 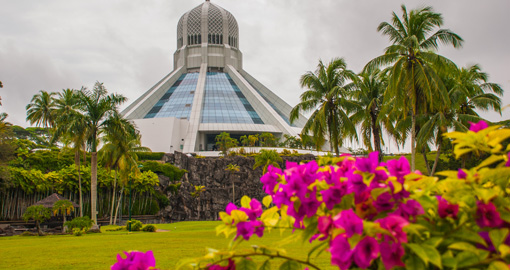 This is the world’s first Cat Museum devoted to all things feline. You don’t need to be a cat lover to enjoy a range of exhibits, photos, feline art and cat souvenirs. The museum is spread over four galleries which contain over 4000 artifacts including paintings and memorials related to cats. Exhibits include a mummified cat from ancient Egypt, a gallery of feline-related advertising, and the five species of wild cats found in Borneo. The Cat Museum has many interesting historical stories about cats. There are even real stuffed cats here and famous cats such as Garfield, Felix and Hello Kitty.