Mongolia: Things to do 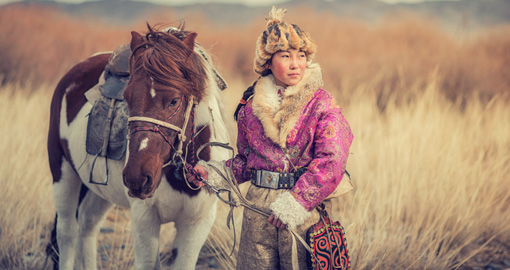 Every country has its outstanding and special attractions. Goway has selected its Top 12 things to do in Mongolia (not in any particular order) for you to enjoy on your visit to this destination. 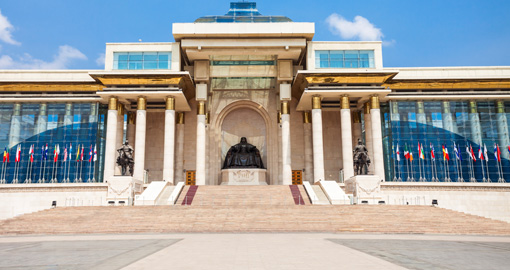 The central square of Mongolia's capital, a large monument to Genghis Khan as well as other famous past Mongolians, dominates the square's north side directly in front of the Government Palace. The centre of the square features an equestrian statue of Damdin Sukhbaatar, one of the leaders of Mongolia's 1921 revolution when Mongolia obtained independence from China. The Government Palace was built in 1951. In front of it is the Mausoleum of Sukkhbaatar. An inner courtyard of the Government Palace holds a large ceremonial ger (large tent) used for hosting dignitaries. Also in the square is the State Ballet and Opera House. To the south sits the Lenin Club building (built in 1929) next to the sail-shaped skyscraper the Blue Sky Tower. Next to the Opera House is the Central Tower, home to luxury shops including Louis Vuitton and Armani. On the east side of the square is the Soviet-style Cultural Palace which contains the Mongolian National Modern Art Gallery and several other cultural institutions. 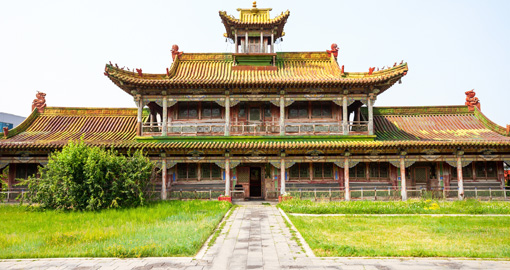 Built between 1893 and 1903, this palace is where Mongolia’s eighth Living Buddha and last king Bogd Khan, lived for 20 years. There are six temples containing Buddhist artworks, sculptures and thankas (Tibetan Buddhist paintings on cotton, silk, etc.). Inside the king and queen's unusual living arrangements are a collection of gifts received from foreign dignitaries; such as a pair of golden boots from a Russian tsar, a robe made from 80 foxes, and a ger lined with the skins of 150 leopards. 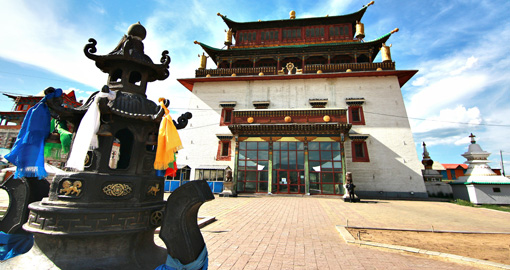 This restored Buddhist monastery’s Tibetan name translates as the "Great Place of Complete Joy". It has over 150 monks in residence and features a 26.5-metre/86 feet high statue of Avalokitesvara (a bodhisattva who embodies the compassion of all Buddhas). The monastery, constructed in 1809, contains only one of its original wooden pillars. The 13th Dalai Lama resided here in 1904. In the 1930s, the Communist government of Mongolia destroyed all but a few monasteries and killed more than 15,000 lamas. However, Gandantegchinlen Monastery escaped this destruction and was allowed to continue as the only functioning Buddhist monastery. This monastery is one of Mongolia’s most important and biggest tourist attractions.

Mongolia’s wonderful National Museum covers the Neolithic era up to the present day, offering an excellent overview of Mongolian culture. This includes stone-age petroglyphs, exquisite gold ornamentation, and traditional ceremonial costumes. As well as petroglyphs, there are stone sculptures of reindeer and animals, burial sites from Hun and Uighur eras. There is an outstanding collection of costumes, hats, and jewellery representing Mongolia’s ethnic groups plus a collection of 12th-century Mongol armour, and correspondence between Pope Innocent IV and Guyuk Khan. The 20th Century-history section has a famous hollow horsewhip used to hide a secret letter written in 1920 by Bogd Khan enlisting the aid of the Russian Red Army. Dinosaurs, of all shapes and sizes, once roamed the Gobi Desert. Their fossilized bones and eggs were uncovered by the American explorer, Roy Chapman Andrews in the 1920s. Here you see some of the best examples of Mongolian dinosaur fossils. The centrepiece of the museum is a 4 metre/13 foot tall flesh-eating Tarbosaurus bataar (a cousin of the Tyrannosaurus rex), and the smaller Saurolophus with its distinctive cranial crest. The Tarbosaurus bataar made international headlines when sold for over US$1 million at an auction in Texas. The museum includes Velociraptor, Protoceratops, and a nest of Oviraptor eggs. 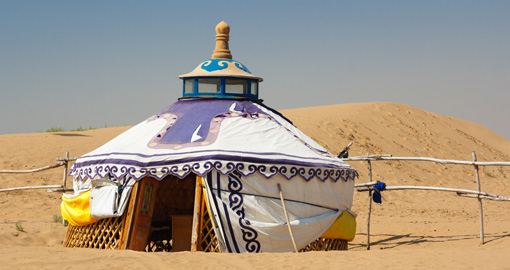 The Gobi Desert has one of the most unusual desert landscapes in the world and the fifth largest. It measures 1600 kilometres/1000 miles east to west and 800 kilometres/500 miles north to south. Archaeologists and palaeontologists have done excavations in the Nemegt Basin in the northwestern part of the Gobi Desert which is noted for its fossil treasures; including early mammals, dinosaur eggs, and prehistoric stone implements, some 100,000 years old. Khongoryn Els, known as the "Singing Sands", lies in the Gobi Gurvansaikhan National Park. Gravel plains and rocky outcrops, cover much of this area, are home to the remaining two-humped camel and Gobi bears; the only bears in a desert landscape. The Eagle Valley is a protected site which narrows into a gorge. Bayanzag is another must-see place especially for those keen on history. This was an ancient sea floor and the site of several remarkable paleontological finds. The first ever full dinosaur skeleton was found in Khermen tsav; which is a canyon with an oasis. 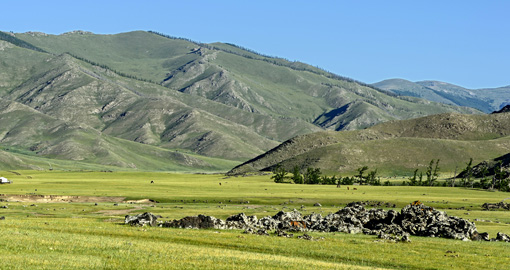 The Orkhon Valley is a UNESCO World Heritage site due to its “evolution of nomadic pastoral traditions spanning more than two millennia”; located about 360 kilometres/224 miles south-east of Ulaan Baatar. The first proof of life was found here, suggesting that the valley was inhabited 60,000 years ago. For centuries, Orkhon Valley was the seat of Imperial power in Mongolia. Bilge Khan the 8th Century ruler of the Gokturk Empire, made his nomadic capital here. Today, Orkhon Valley is a large nomadic region where many breeders set up camp. The picturesque steppes’ landscape together with the rich fauna and flora, make this area the perfect place to discover nomadic Mongolia in an enchanting setting. The valley is the point of departure for hikes or treks in the surrounding mountains. It is possible to fish or cycle in the mountains. 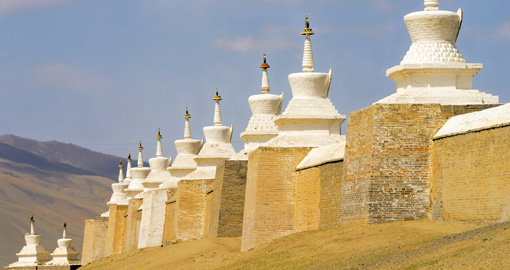 Founded in 1586, the first Buddhist monastery in Mongolia is located in the Orkhon Valley. From 1937 to 1965, it was shut down by the Soviet Union. Afterwards it functioned as a museum. With the collapse of Communism in 1990, the monastery became active. Today it is the most important monastery in Mongolia. At one time there were over 60 temples housing over 1000 monks within; now there are only 3 temples dating back to the 16th Century containing wall paintings, thankas and masks. 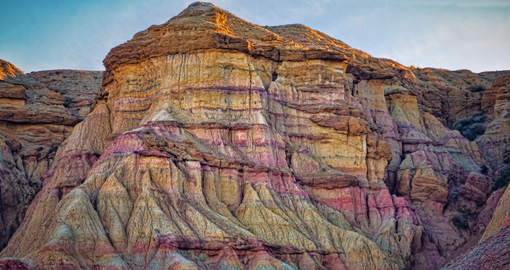 The rocky formations of Tsagaan Suvarga are white-sand cliffs, striped with pastel shades of purple, orange, and red. Its name translates as “white stupa”. The cliffs are formed by the wind over thousands of years and look like a ruined city if observed from a certain distance. They are about 60 metres/196 feet high and 400 metres/1312 feet) long. There are two sites to explore: the first is a cave which is 70 metres/230 feet long, the second is Del uul (Back Mountain) with rock drawings from the Bronze Age; considered the largest in Central Asia. 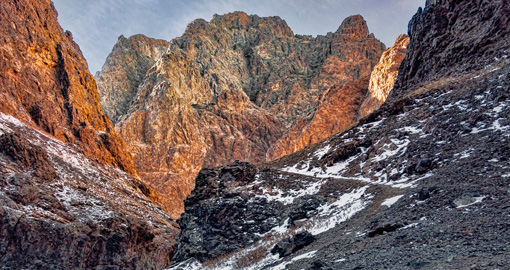 Gurvan Saikhan National Park, which lies on the edge of the Gobi Desert, is one of Mongolia’s most popular and largest national parks. Stretching 380 kilometres/230 miles from east to west and 80 kilometres/50 miles from north to south. It is possible to drive to remote western areas where there is an eerie Mars landscape. The attractions are sand dunes include the Khongoryn Els: the Singing Sands, an ice canyon with an ice field most of the year, and stunning mountain vistas. The park contains more than 200 types of birds, endangered species such as the wild camel, the snow leopard, and the Siberian ibex. The park also has 600 types of plants. 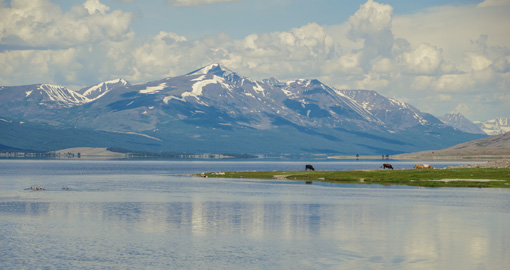 The Altai Tavan Bogd National Park borders China and Russia. Kazakhstan can be seen from the park, on the highest peak in Mongolia, Kuiten Uul Mountain at 4374 metres/14,200 feet. The park contains spectacular scenery with white mountains, glaciers, deep valleys, and large lakes. It covers a vast area and is home to three large freshwater lakes and 34 glaciers, plus several waterfalls. The Tavan Bogd Mountains are considered sacred to the local Kazakhs, Tuvans, Mongolians, and nomadic herders who live inside the park. Many have never lived anywhere else and cannot speak Mongolian, the national language. Ancient tribes left many artifacts used for religious ceremonies. Today, tens of thousands of petroglyphs in the park are part of this UNESCO World Heritage site. In addition, there are numerous Turkic Stone Men and stone burial mounds. There are many endangered species inside the park: argali sheep, ibex, grey wolves, red deer, black vulture, elk, snow leopards, golden eagles, and many others. 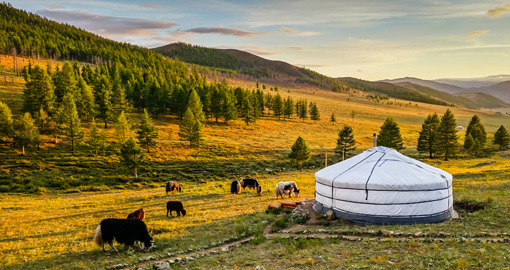 Considered one of the more scenic areas in Mongolia, the park is a short drive outside of Ulaan Baatar. It is mountainous with a beautiful river, forests and interestingly shaped rocks. It offers great opportunities: hiking, rock climbing, swimming (in icy-cold water), rafting, horse riding, and bird watching. You can see distinctive rocks resembling a giant turtle, a person reading a book among others.