Things to do in Myanmar

Every country has its outstanding and special attractions. Goway has selected its Top 12 things to do in Myanmar (not in any particular order) for you to enjoy on your visit to this destination. 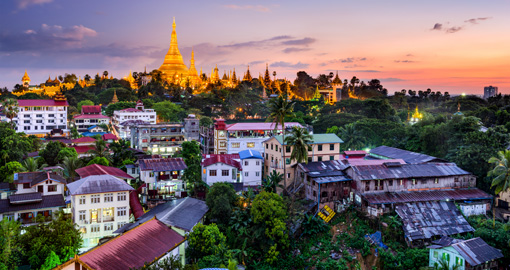 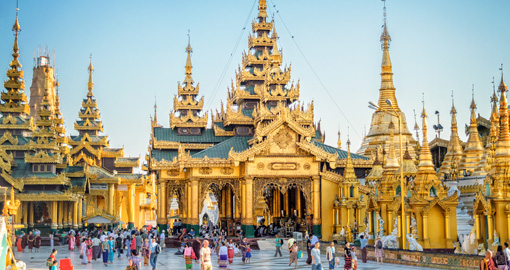 This is the most important site in Yangon on a Myanmar vacation. Pagoda is a misleading word for this amazing and extensive temple complex. It is a city within a city and the holiest and most revered Buddhist temple in Myanmar. It is visible from most parts of Yangon as it stands on a hill and is 110 metres/360 feet tall. At night, it is illuminated and stands out on the city skyline. It has hundreds of gold plates, 5000 diamonds, 2000 rubies, sapphires and other gems encrusted on the roof’s structure. The pagoda is supposedly 2000 years old which would make it the oldest Buddhist edifice in the world and is believed to contain relics of four previous Buddhas. 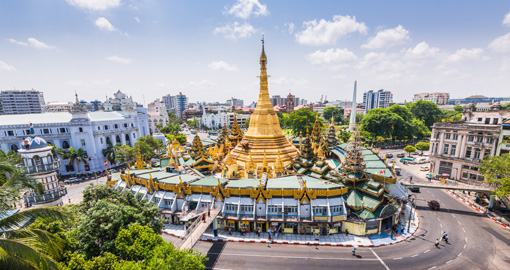 Another revered religious edifice is the octagonal-shaped Sule Pagoda, situated strangely enough on a traffic island in the middle of a busy intersection in the middle of Yangon. The dome structure is topped with a golden spire. This 2000-year-old pagoda, with a golden dome, supposedly housed a strand of Buddha’s hair that the Buddha himself is said to have given to two Burmese merchant brothers. Around the pagoda is a circular structure which houses small shops where services such as astrology and palmistry are offered. Shrines around the pagoda contain images of the Buddha and some bronze bells which are rung by Buddhist devotees.

The National Museum of Myanmar exhibits displays of Burmese historical artifacts showcasing the best of Myanmar’s artistic heritage and craftsmanship. There are priceless works of art and memorabilia also on display relating to the history, culture and civilization of the Burmese people in 14 halls on four storeys. The ground floor has exhibits about the evolution of the Myanmar script and alphabet. On the first floor is an impressive display of royal regalia and exhibits of historic significance. 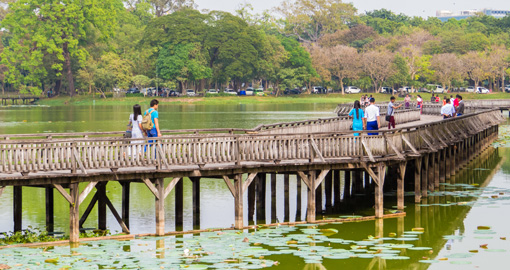 This attractive lake is contained in a park and is an oasis inside a very busy and bustling city to be enjoyed on a Myanmar tour. It was originally built by the British as a reservoir. At sunset, the Shwedagon Pagoda is reflected in the lake’s waters. There is a boardwalk around the southern edge of the lake which provides great views. On the north side of the lake is a large pile of artificial rocks on which there are restaurants, bars, and a viewing deck on the 5th floor. On the ground floor are exhibits of works by local artists. 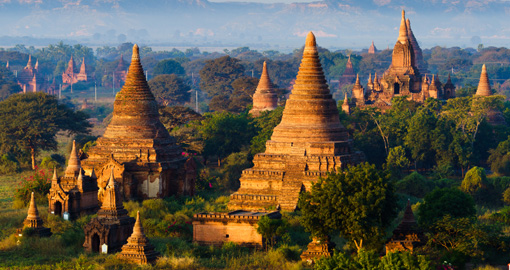 Bagan, which definitely has to be part of a Myanmar vacation, is one of the richest archaeological sites in Southeast Asia situated on the banks of the Irrawaddy River. This ancient city was, from the 9th to the 13th Century, the capital of the Kingdom of Pagan. An amazing 10,000 Buddhist temples, pagodas, and monasteries were built during this time. Today, though, there are around 2200 surviving temples and pagodas which are spread out over a wide area, very close to the town of Bagan. The shapes and sizes are extremely varied. At sunset, one of the things to do is to gaze down from one of the taller temples and watch the glinting sun beat down on the area creating a wonderful sight of the temples emanating a magical hue. One special way to really enjoy the temples is to take a hot-air balloon ride. Another is to ride in a horse cart and driver through the temple complex. 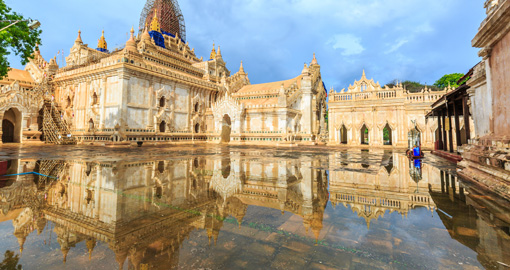 The holiest temple is the Ananda Temple, built in 1091 AD, which contains four Buddhas. The Bupaya Stupa is a golden gourd-shaped structure, sitting on top of a complex temple. The Shwesandaw Temple is also known as the “Sunset Temple,” as this is one of the more popular places where, every evening, when the sun sets, people gather to watch the spectacle. The Dhammayangyi Temple which was ordered by the king at the time is known as the “Ghost Temple,” presumably haunted by this particular person who was assassinated before it was completed. . One other attraction in Bagan is the Night Market. 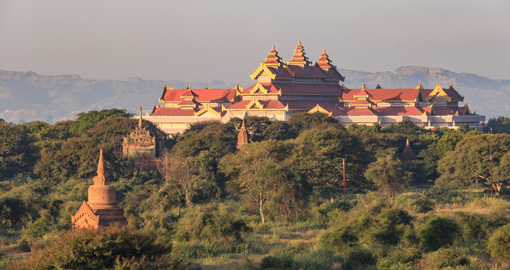 The Bagan Archaeological Museum houses a collection of ancient stone tablets that were found around Bagan. The building is fully furnished with Myanmar handicrafts including arts and crafts from the Bagan Era, portraits of ancient pagodas, ancient wall paintings and Buddha images. 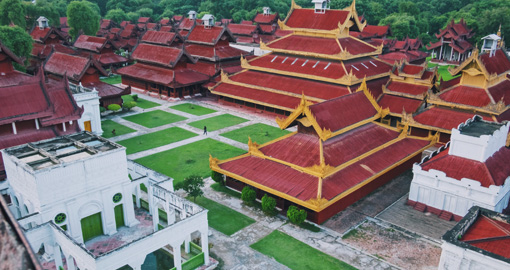 Mandalay Palace used to be more than just a royal residence. It was a walled city constructed in the mid-1800’s which has a Glass Palace and an audience hall. The complex ceased to be a royal residence and the seat of government in 1885. Most of it was destroyed during World War II, but has mostly been restored. There is a watchtower which you can climb combined with a few informational signs pertaining to its history. The tower offers a view of the surrounding moat. The palace citadel has 4 walls that form a perfect square and are 2 kilometres/1.2 miles in circumference complete with a total of 48 bastions with gold tipped spires. There are several mausoleums which contain some members of the Royal family. The Mandalay Cultural Museum is located inside the palace grounds. 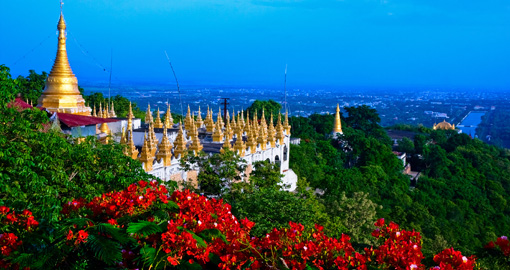 This hill takes about half an hour to walk up reached by a covered stairway but the view is very rewarding while on a Myanmar tour. En route, you pass a number of monasteries and temples which makes the walk even more interesting and is a major part of the experience. Once at the top, you will be rewarded with great views of the city. If taking the southern route, you will need to go barefoot in places because you pass through numerous temples and pagodas. One of these is the Sandamuni Pagoda which has the largest iron Buddha weighing 18,500 kilogrammes/41,000 pounds. The top of the hill is especially popular at sunset when young monks engage foreigners for language practice. Steeper stairways lead up from the north and the west but there is little to see en route. 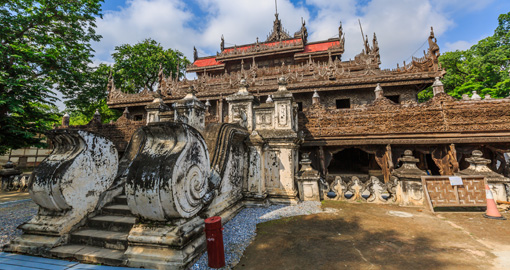 The Shwenandaw Monastery is the most significant of Mandalay’s historic buildings as this “Golden Palace Monastery” remains the sole major survivor of the former wooden Royal Palace built by King Mindon in the mid-19th Century. It is an example of 19th Century Myanmar teak architecture and a masterpiece of the woodcarver’s art with its beautiful intricate carvings of Buddhist stories. Inside the building are several well-preserved panels which depict scenes from the Jataka tales, (tales about the previous lives of the Buddha). 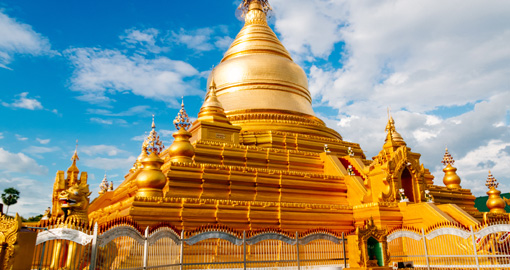 Kuthodaw Pagoda is home to the world’s largest “book” which is actually made up of 729 standing stone “pages”. They span across the vast pagoda grounds in long spectacular organized rows. The books are filled with sacred teachings representing 15 books of Buddha’s teachings. Every page of the book is about a metre/3 feet wide and two metres/6 feet tall. 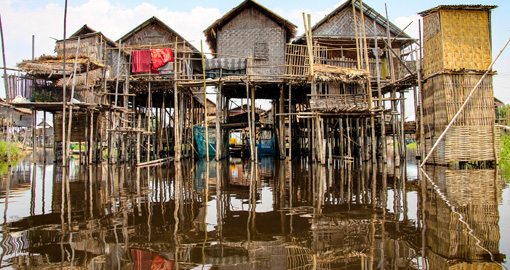 Inle Lake is a very large lake (22 kilometres/13.5 miles long and 12 kilometres/7 miles wide) bordering Thailand and Laos. It is exceptionally attractive with its mountain backdrop and is natural and unpolluted. One of the major attractions is the floating villages and colourful daily floating market where hand-made goods for local use and trading are sold. Inle Lake is also the region where over 30 hill tribes live. There are several accommodation resorts built above the lake on stilts. One unusual venue is the Jumping Cat Monastery, built on stilts where cats are trained by monks to jump through small hoops. The most popular way to experience Inle Lake is to take a cruise on wooden canoes fitted with long-tailed outboard motors. There are also motorboat trips on a regular basis. 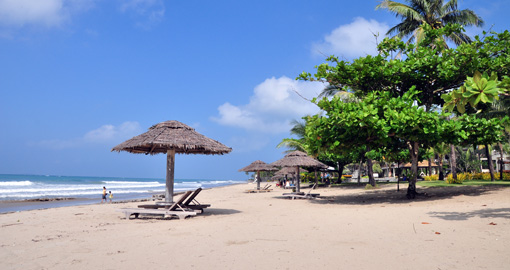 Myanmar has some lovely and beautiful beaches that can provide a little rest and relaxation while on your Myanmar vacation. The best known is Ngapali, where the beach stretches some 3 kilometres/2 miles with white sand and is fringed with coconut palms. It maintains a laid-back fishing village with small boats that head out nightly to catch fish and served to visitors just hours later. There is a 9-hole golf course, an elephant camp, and the ability to take part in water sports including snorkeling and scuba diving. ​ The beach looks west, which means there is not much sun in the morning but there is a beautiful sunset in the evening. 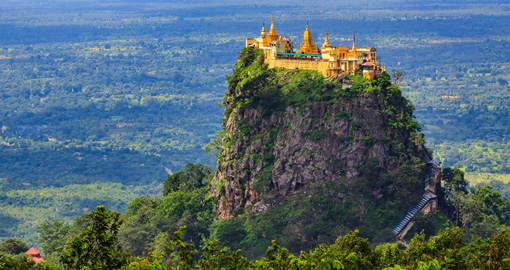 Mount Popa is a volcano 1518 metres/4981 feet) above sea level about 50 kilometres/31 miles south-east of Bagan. It can be seen from the Irrawaddy River as far away as 60 kilometres/37 miles in clear weather. It is best known as a pilgrimage site, with numerous temples and relic sites on the top the mountain. Nearby is Taung Kalat, a sheer-sided hill where there is a Buddhist monastery located at the summit From the top of Taung Kalat, you can enjoy a panoramic view all the way to Bagan.