Things to do in Philippines

Every country has its outstanding and special attractions. Goway has selected its top 8 things to do in The Philippines (not in any particular order) for you to enjoy on your visit to this destination. 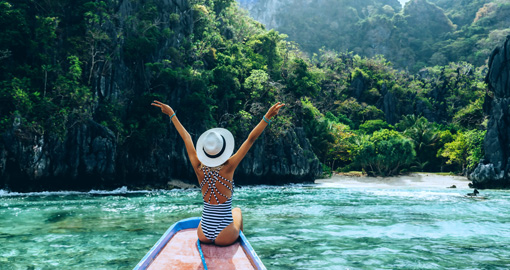 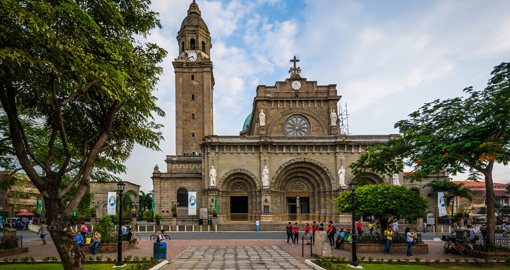 This is the oldest part of the city which is surrounded by 16th and 17th Century-built walls and the highlight in Manila on a Philippines vacation. As it was the centre of the capital up to the end of the 19th Century, it contains very beautiful churches, palaces and buildings in the Colonial style. There is a European flavour to it. Inside the walls is San Augustin Church which dated back to the 16th Century and is a UNESCO Worlds heritage site and the oldest stone building in The Philippines. In the interior, there is a crucifix from the 1500s and the 17th Century choir stalls are hewn from rich wood inlaid with ivory. There is a collection of ecclesiastical art including paintings, wooden statues, crucifixes, furniture, antique missals, old vestments and altars brought here from churches around the country. Fort Santiago guards the old city and was the former military headquarters of the Spanish Colonial government. Although the fort sustained very heavy damage during the 1945 Battle of Manila, several key portions of the compound were subsequently restored. 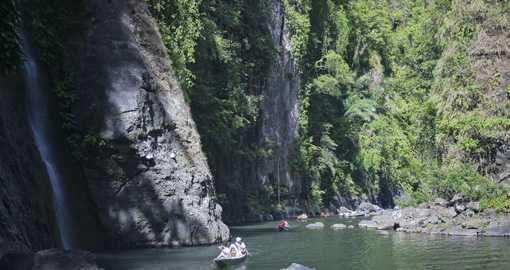 Pagsanjan Falls is one of the most famous waterfalls in the Philippines. This three-drop waterfall is reached by a very beautiful river trip on a dugout canoe from the town of Pagsanjan. Skilled and accredited boatmen take you on the scenic boat ride. En route, you will enjoy the sight of other minor falls (approximately 20 of them), lush vegetation, and natural rock formations. On Philippine tours, the falls can also be reached from the top by a short hike from Cavinti. Once you reach the main falls, you can take a raft ride through the falls, and explore the Devil's Cave behind the falls, famous for its reverberating echoes and, the highlight of this trip, a rapid descent downstream known as "shooting the rapids'". 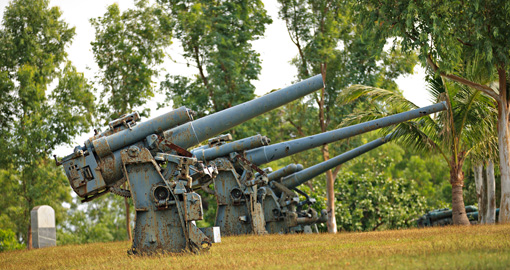 Due to its location, Corregidor has historically been fortified with coastal artillery to defend the entrance of Manila Bay and Manila from attacks by enemy warships. It is 48 kilometres/30 miles from Manila. Corregidor is a historic monument as well as a tourist destination. A tour of the island will feature military installations used during World War II. This island fortress stands as a memorial for the courage and heroism of its Filipino and American defenders who bravely held their ground against the overwhelming number of invading Japanese forces during World War II. Most of the war-ravaged buildings have not been restored and have been left as they were after the war in reverence to the Filipino and American soldiers who died there after holding out for 27 days in 1942. A visit to this former battleground is a memorable experience. 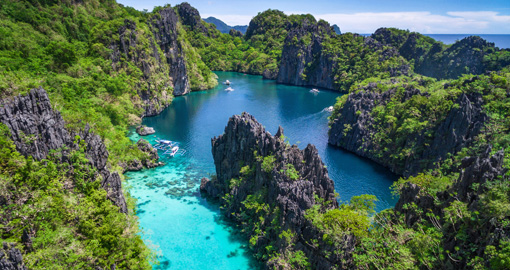 Palawan has over 1700 islands and islets with a coastline of 2000 kilometres in length. It has wonderful beaches but that’s not all on a Philippines vacation. Palawan’s underwater scenery, which is exceptionally diverse, makes for some of the best dive spots anywhere. The whole island is surrounded by beautiful coral gardens and reefs that abound with colourful marine life. Palawan has been recognized as one of the world’s best nature reserves due to its rainforests, mountains, limestone cliffs, caves and beaches. Kayangan Lake on Coron Island is one of cleanest and clearest in Asia. However, to get to it, you have to climb up a .steep slope for 10 minutes but it’s worth it. Puerto Princesa's subterranean river is the world's longest underground river reached by paddle boats which take visitors for a one-hour exploration inside to experience one of the most beautiful natural treasures of the world including limestone formations and bats flying above the cave. The El Nido Marine Reserve is the country's largest wildlife preservation area and its diverse ecosystems include rainforest, mangroves, white sand beaches, coral reefs, and limestone cliffs. Countless varieties of fish are found here. Manta rays are a common sight. Divers might see one of the world's rarest marine mammals, the sea cow. Boracay is an island paradise with white, powdery sand and stunning sunsets. It is not a large island but is known for not only its tranquility but also has a vibrant nightlife. Leisure activities include horseback riding, scuba diving, snorkeling, windsurfing, kiteboarding, cliff diving and parasailing. There is an 18-hole golf course. The Bat Cave is home to many small insect-eating bats including the larger fruit bat which resides in trees on the hillside above Punta Bunga Beach. One of the most popular activities in Boracay is to take a boat tour around the island’s many beaches including Puka Beach, Crocodile Beach, and Tambisaan Beach. A highlight of Philippine tours here is observing the amazing sunsets each evening. Subic Bay is around 100 kilometres/62 miles northwest of Manila. It was formerly the site of a major United States Navy facility. Today, it is an economic, commercial and tourist destination booming with international-class restaurants and duty-free shopping. The coastal area is surrounded by mountains with lush impenetrable jungles, ideal for trekking as well as having many beach resorts and hotels. Scuba diving in Subic Bay revolves around the many wrecks from the Second World War. There are wreck dives to suit every level of diver from experienced to novice. Possibly the best zoo in the Philippines is the Zoobic Safari which simulates the natural habitat of animals so that feel safe and at home. There are feeding sessions with crocodiles, tigers and other animals. The Chocolate Hills are in Bohol Province and area of geological formation with over 1250 hills spread out over 50 square kilometres/20 square miles. They are covered in green grass that turns brown (like chocolate) during the dry season, hence the name. This transforms the area into endless rows of "chocolate kisses”. These mounds are generally conical and almost all of the same symmetrical in shape. Many people who first see pictures of this landscape can hardly believe that these hills are not man-made artifact. Legend has it that the hills came into existence when two giants threw stones and sand at each other in a fight that lasted for days. However, up to this day, geologists have not reached a consensus on how they were formed. The spectacular Banaue Rice Terraces are 2,000-year-old terraces that were carved into the mountains by ancestors of the indigenous people. They are frequently called the "Eighth Wonder of the World” and are a National Cultural Treasure of the Philippines. It is commonly thought that the terraces were built largely by hand. The terraces are located approximately 1500 metres/5000 feet above sea level. They are fed by an ancient irrigation system from the rainforests above the terraces. It is said that if the steps were put end to end, it would encircle half the globe. Today, locals still plant rice and vegetables on the terraces. The most popular place to view the rice terraces on a Philippine vacation is called the Sunrise Viewpoint, where local tribes’ people pose for photographs and sell wood carvings. It is also possible to set out on foot along the pathways across the rice paddies, their banks scattered with scarlet wildflowers that contrast spectacularly with the vivid green of the rice plantings. The terraces can be visited any time of the year but the best time is between February and March when the cleaning and planting time occurs and between June and July when the harvest occurs.