Things to do in Singapore

Every country has its outstanding and special attractions. Goway has selected its top 11 things to do in Singapore (not in any particular order) for you to enjoy on your visit to this destination. 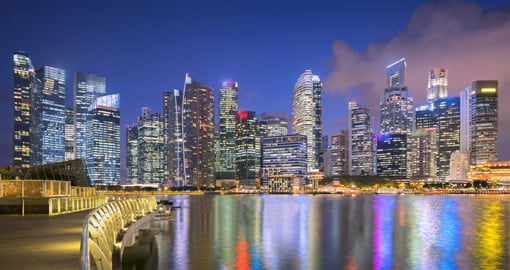 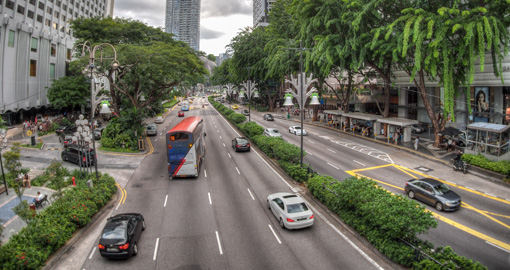 Not only is this perhaps the epicentre of the city on a Singapore vacation but it is also the centre for shopping, restaurants, cafes, art galleries, movie theatres and other general entertainment venues. There are 47 shopping malls over a distance of 1.5 kilometres/1 miles. Shops range from small boutiques to name stores such as H & M, Zara etc. For bargains, it is better to do your purchasing in other districts such as Little India and Chinatown. Orchard Road is always teeming with life both day and night. 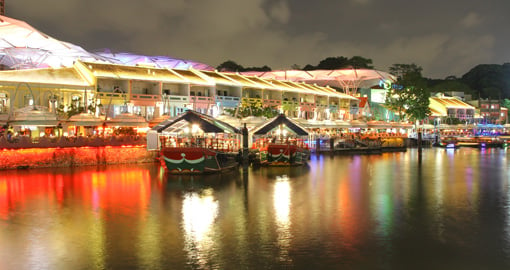 The Singapore River cuts through the heart of the city and this allows the banks of the river to be a very important part of the night scene. You can stroll along Clarke Quay with its bright lights and illuminations and decide on one of the many outdoor and indoor restaurants, bars, and nightclubs available. You will also find moored Chinese junks that are floating pubs and restaurants. River cruises and river taxis on the Singapore River can be joined at Clarke Quay. Boat Quay is a continuation of Clarke Quay and again is the place for bars and outdoor restaurants. The coloured houses here are very attractive as are the reflections at night across the river. Head to Elgin Bridge for wonderful panoramic views of Singapore’s skyline. 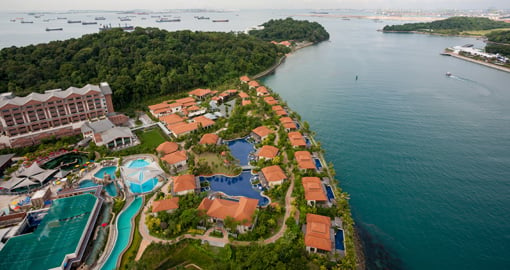 Sentosa Island is a man-made island that was built as an entertainment site on a Singapore tour. It is located very close to the centre of the city and can be reached either by a cable car ride or by the subway system. The island is basically divided into the beach areas, the attractions and hotel accommodations. The beaches are on a stretch of sand, 2 kilometres/1.2 miles in length. This includes Palawan Beach, Siloso Beach and Tanjong Beach, all of which are artificial as the sand was brought in. The many attractions include Universal Studios, Madame Tussauds, and Marine Life Park which consists of a water park and an aquarium. Tiger Sky Tower, Singapore Butterfly and the Insect Kingdom, the Royal Albatross, a unique luxury Tall Ship (pirate ship), the Sentosa Merlion, a gigantic 37 metre/134 feet tall replica of the Merlion housing two viewing galleries and a souvenir shop, the Skyline Luge & Skyride featuring a self-steering, gravity-driven three-wheel cart and two golf courses. 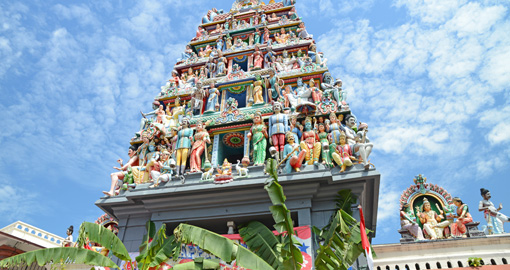 No trip to Singapore is complete without a visit to Chinatown because there are so many attractions here. The Chinatown Heritage Centre is a museum depicting the history of Chinese culture in Singapore with recreated scenes of houses and shops from the 1950s. Baba House was the authentic home of a 19th Century Chinese businessman which can be visited. The elaborate and colourful Thian Hock Keng Temple was the first temple built by immigrants. The Sri Mariamman Temple was the first Hindu temple in Singapore constructed in the 19th Century. The Maxwell Road Hawker Centre has hundreds of open-air stalls selling food ready to eat. The Red Hot Design Museum is one of the largest design centres in Asia with ever-changing exhibitions. There are also numerous street markets where you can buy everything from clothes to souvenirs. 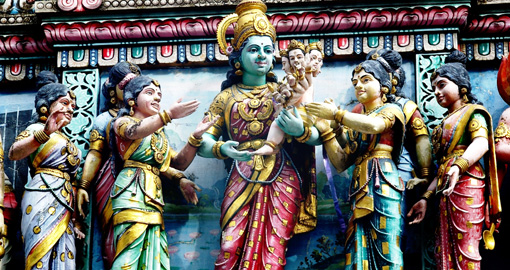 Little India is the centre for the large Indian community in Singapore and one of the most colourful places to visit in the city when on a Singapore vacation. It contains a mix of Hindu and Chinese temples and mosques and churches. Stores sell saris and gold bangles, spices and incense waft in from the doorways with Bollywood's latest soundtracks blaring. The Sri Veeramakaliamman Temple is the oldest temple dating back to 1881. Sunday evening is when many workers from the subcontinent turn up. A good time to be here is during Deepavali, the Hindu Festival of Light. 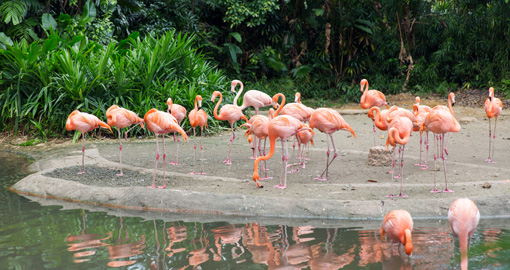 Jurong Bird Park covers a large area and is Asia’s largest bird sanctuary with a collection of over 5000 birds with 400 different species. The Waterfall Aviary contains 600 birds and a 30-metre/100-foot-high waterfall. Flamingo Lake and Pelican Cove contain lots of flamingos and pelicans naturally. In one corner of the zoo, there is a section full of flightless birds such as ostriches, emus, rheas and cassowaries. The Park contains 5 species of penguins including king penguins. The World of Darkness houses 60 birds who live in perpetual darkness being nocturnal. There is a bird show with the highest number of performing birds in the world with some imitating the sounds of other types of birds.

The Night Safari was the world's first nocturnal zoo and a very popular attraction on a Singapore tour, only open at night. It is made up of rainforest and houses more than 2500 animals with 130 different species of which around one-third are endangered species. It is divided into 7 geographical zones which can be explored either on foot via four walking trails or by a tram. Some of the animal types include Indian rhinoceros, Asian elephants, pangolins and tarsiers. There are cultural performances such as tribal dances, blowpipe demonstrations and fire-eating displays. 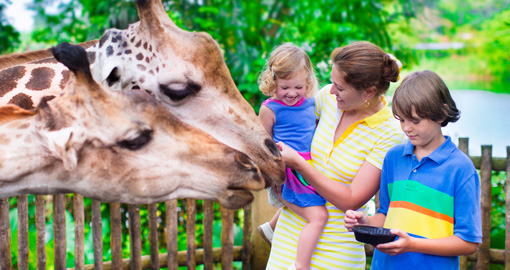 The Singapore Zoo contains around 315 species of animals some of which are considered to be threatened species. The animals are shown in a natural environment with hidden barriers, moats, and glass between the animals and visitors. It houses the largest captive colony of orangutans in the world. Animals live in spacious, landscaped enclosures separated from the visitors by dry and wet moats. Dangerous animals that can climb are housed in landscaped glass-fronted enclosures. The zoo also offers various types of rides within the premises by tram, animals, boat, pony and horse carriage rides. "Breakfast with an Orangutan" allows visitors to meet and interact closely with the orangutans. Animal shows, as well as token feedings, are conducted with live commentaries by the keepers. 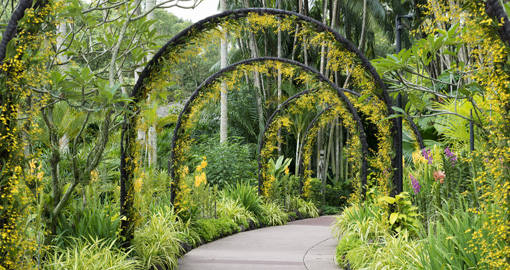 The Singapore Botanic Gardens has been in existence for over 150 years, the only tropical garden to be honoured as a UNESCO World Heritage Site. It is the most visited botanic garden in the world. The gardens have an array of botanical and horticultural attractions with a rich history and a wonderful plant collection of worldwide significance. The various attractions include the Learning Forest, National Orchid Garden which complements Singapore’s status as a major exporter of cut orchids (aided by an equatorial climate, it houses the largest orchid collection of 1200 species and 2000 hybrids) and the Jacob Ballas Children's Garden which allows children to experience and learn about different eco-systems. More than 10,000 species of flora are spread over its 82-hectare area. Singapore is one of the only two major cities with a tropical rainforest within its city limits. 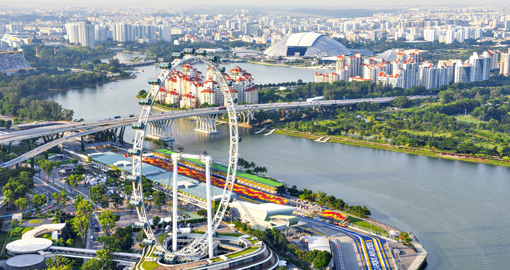 On a Singapore vacation, you can experience breathtaking, panoramic views on Asia’s largest observation wheel (a giant Ferris wheel) which offers a bird’s-eye view of the whole of the city. Sitting inside a capsule which climbs to a height of 165 metres/535 feet above ground level, you experience a 360˚ view of everything. One rotation takes 30 minutes. You can have, if desired, a Champagne Flight or your own personal capsule (extra charges involved, naturally)

A Singapore Sling at Raffles Hotel 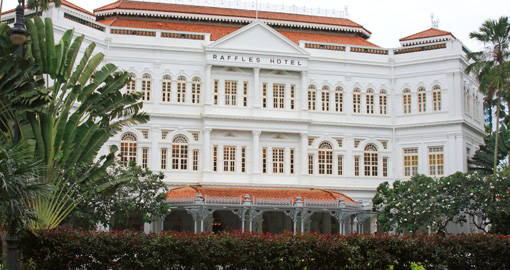 A good way to end your Singapore tour would be to head to the world-famous Raffles Hotel. Inside the hotel, you will find the Long Bar, a time-worn watering hole and gathering place for the local community. The story goes that women should not be seen with an alcoholic drink so an entrepreneurial gentleman invented the Singapore Sling which is a cocktail that looks like fruit juice but isn’t. It is now a drink to be enjoyed by everyone.