Sri Lanka: Things to do

Every country has its outstanding and special attractions. Goway has selected its Top 12 things to do in Sri Lanka (not in any particular order) for you to enjoy on your visit to this destination. 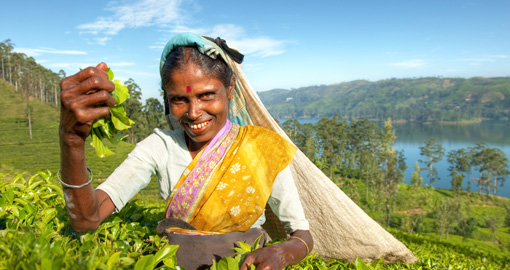 The National Museum of Colombo which is also known as the Sri Lanka National Museum is the largest museum in Sri Lanka It contains collections of much importance to Sri Lanka such as the regalia of the country including the throne and crown of the Kandyan monarchs as well as many other exhibits telling the story of ancient Sri Lanka. Some of the collections date back to 1877 when the museum first opened such as art carvings, swords, guns, and reproductions of English paintings from the 19th Century plus a collection of demon masks. 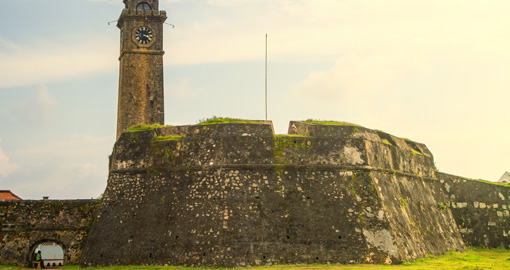 Galle Fort, in the coastal town of Galle, was built first in 1588 by the Portuguese and extensively fortified by the Dutch during the 17th Century. It is a historical, archaeological and architectural heritage monument. It is a UNESCO World Heritage site and the largest remaining fortress in Asia built by European occupiers. Some of the sites at the fort include the Old Gate with the British Coat-of-Arms, the Old Dutch Hospital, the ramparts which give excellent views of the Indian Ocean, a clock tower built in 1882 and a lighthouse built in 1939. 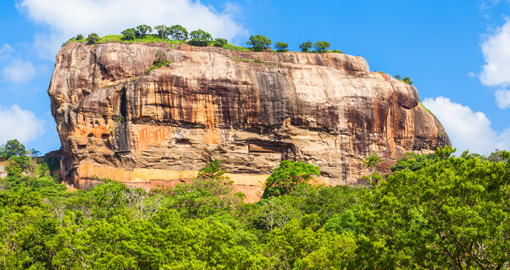 Sigiriya is an ancient rock fortress located near the town of Dambulla. It is a site of historical and archaeological significance that is dominated by a massive column of rock nearly 200 metres/660 feet high. According to historical data, the site was selected by King Kasyapa (477 – 495 AD) for his new capital. He built the palace on the top of the rock and decorated its sides with colourful frescoes. On a small plateau about halfway up the side of this rock, he built a gateway in the form of an enormous lion. The name of this place is derived from this structure (Lion Rock). There are many rock shelters and caves in the vicinity which were occupied by Buddhist monks as early as the 3rd Century BC. The rock rises dramatically from the central plains. The near-vertical walls reach up to a flat-topped summit that contains the ruins of an ancient civilization. On the way to the top up a staircase, you pass a series of remarkable frescoes and a pair of colossal lion's paws carved into the bedrock. Protected from the sun in the sheltered gallery, the frescoes remain in remarkably good condition. The exact dates of the impressive frescoes are thought to date back to 5th Century. Another aspect of Sigiriya is that it is considered one of the most important urban planning sites of the first 1000 years AD. The gardens here are one of the most important aspects of the site as they are among the oldest landscaped gardens in the world. The gardens are divided into the water gardens, cave and boulder gardens and terraced gardens. 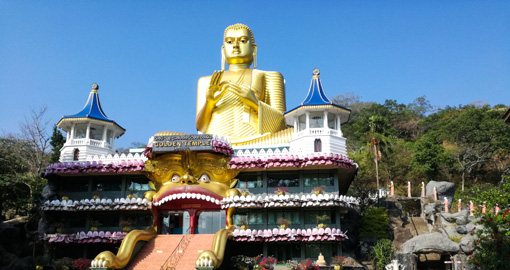 The Dambulla Cave Temple, also known as the Golden Temple of Dambulla, is a UNESCO World Heritage Site situated in the central part of the country. It is the largest and best-preserved cave temple complex in Sri Lanka and dated back to the first century BC. The rock stands 160 metres/520 feet over the surrounding plains with more than 80 documented caves. The main ones are five caves, which contain statues and paintings relating to Buddha and his life. Inside the caves, the ceilings are painted with intricate patterns of religious images following the contours of the rock. There are images of the Lord Buddha and bodhisattvas, as well as various gods and goddesses. There are a total of 153 Buddha statues, three statues of Sri Lankan kings and four statues of gods and goddesses. The murals cover a vast area.

Temple of the Sacred Tooth, Kandy 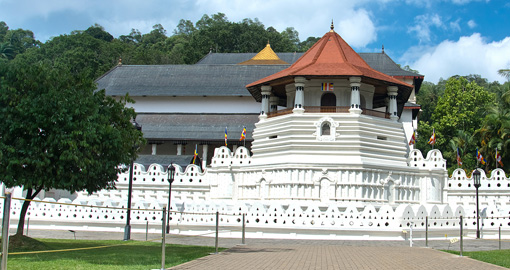 This temple is located in the royal palace complex of the former Kingdom of Kandy. It houses the relic of the tooth of the Buddha and has played an important role in local politics because it is believed that whoever holds the relic holds the governance of the country. It is Sri Lanka’s most important Buddhist relic which is kept in a heavily guarded room. You don’t actually get to see the tooth as it is held in a gold casket stupa. It has been housed in different buildings ever since it came to Sri Lanka in the 4th Century AD. It has been in this one since the early 1700’s. The Temple of the Tooth itself suffered damage and had to be repaired due to various civil wars in the late 20th Century. As well as the main temple, the complex includes a series of smaller temples, shrines and museums. The Royal Palace is situated to the north of the temple. Today it is preserved as an archaeological museum. 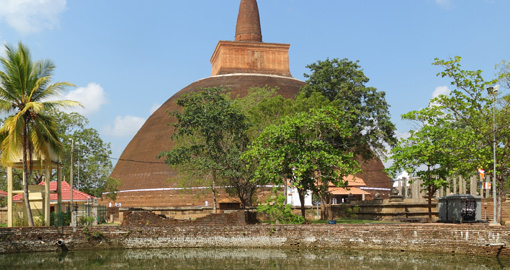 To give it its official name, Abhayagiri Vihara was a major monastery and is one of the most extensive ruins in the world and one of the most sacred Buddhist pilgrimage cities in Sri Lanka. Historically it was a great monastic centre as well as a royal capital, with magnificent monasteries rising to many stories, roofed with gilt bronze or tiles of burnt clay glazed in brilliant colours. It dates back to the 1st Century BC. Originally over 100 metres/ 30 feet high, it was one of the greatest structures in the ancient world, its scale only matched by the pyramids of Giza in Egypt. The architectural elements of the buildings excavated here reflect the social beliefs and religious practices prevalent at the time. Visually, it is stunning and breathtaking. The name means ‘Hill of Protection’ or ‘Fearless Hill’. 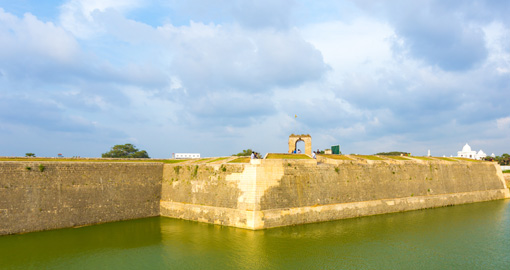 Jaffna Fort is a fort built by the Portuguese in 1618 following the Portuguese invasion of Jaffna. It was captured by the Dutch who expanded it. In 1795, it was taken over by the British and remained under the control of their control until1948. It once housed thousands of troops and civilians. Sections of this vast complex have recently been restored. It was once one of the greatest Dutch forts in Asia, Today, most of the fort is in ruins due to the decades of armed conflict that has affected the region. Outside the moat in the outer ramparts is a series of five tunnels which are well-preserved. There is a room with exhibits about the archaeological history of the fort. 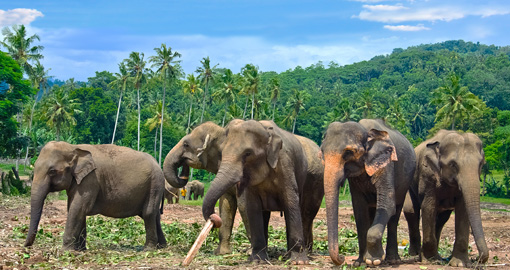 The Pinnawala Elephant Orphanage was established in 1975 by the Sri Lanka Wildlife in order to give care and protection to the many orphaned Elephants found in the jungles of Sri Lanka. A captive breeding program was started in 1982. Since the inception of the programme, over 20 elephants have been bred here. Today, there are around 100 elephants. The aim of the orphanage is to simulate a natural habitat for these elephants. The elephants are taken to the river twice a day for a bath and all the babies less than three years of age are still bottle-fed. The main attraction at the orphanage is observing the elephants bathing which is quite a spectacle. The free movement of the herd within the enclosed land of the orphanage allows the elephants the opportunity to mate. The success story of Pinnawala has drawn the attention of animal activists from all over the world. 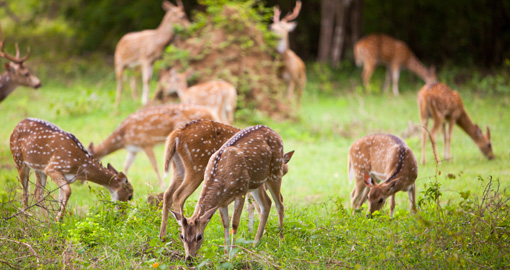 Although Yala National Park is the second largest national park in Sri Lanka, it is the most visited. It was designated as a wildlife reserve in 1990 and, as such, is important for the conservation of wild elephants, leopards and aquatic birds. It is also home to buffalos, wild boars, sloth bears, deer, crocodiles and monkeys. There are organized safari rides to enjoy the park and the animals and you can stay at upscale tented camps. There are also over 200 species of birds. Another interesting aspect of the park is that there are two important pilgrimage sites. This is another park that has been created for the conservation of wild animals. Udawalawe is an important habitat for water birds and Sri Lankan elephants. It is one of the world's best places to view wild elephants. Largely comprised of grasslands and bush forest, it is also one of the best national parks in Sri Lanka for game spotting, framed by vast highlands on its northern boundary. Because of water supply, it is capable of sustaining a large herd of elephants. Other animals that can be seen include deer, wild boar, civet cats, buffalo, languor and mongoose. Additionally, there are many species of exotic birds. Safari drives are available as well as upscale tent camps. 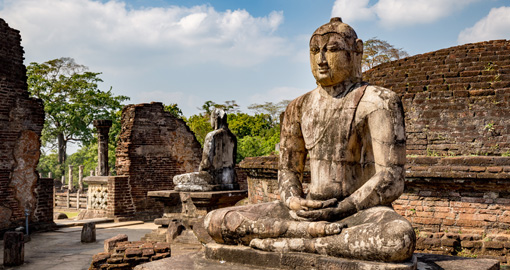 This is a UNESCO World Heritage site which contains the remains of the royal ancient city of the Kingdom of Polonnaruwa. Kings ruled the central part of Sri Lanka 800 years ago when it was a thriving commercial and religious area. The site gives a good idea of the times through the hundreds of archaeological treasures on display here. They include tombs, temples, statues and stupas. Today the ancient city of Polonnaruwa remains one of the best planned archaeological relic cities in the country reflecting the dedication and greatness of the Kingdom's first rulers. Tea is Sri Lanka’s main agricultural export commodity and Sri Lanka is the second largest exporter of tea in the world. The Ceylon Tea Museum consists of four floors. The ground floor and the second floor exhibit very old items of machinery. The third floor is allocated to tea sales outlets, where a selection of Sri Lanka's fine tea is available. The entire top floor is a tea café with wonderful views of the town and the surrounding hills. The grounds surrounding the Tea Museum are landscaped with different varieties of teas.