Things to do in Taiwan

Every country has its outstanding and special attractions. Goway has selected its Top 10 things to do in Taiwan (not in any particular order) for you to enjoy on your visit to this destination. 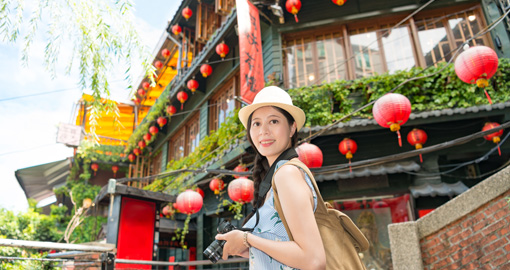 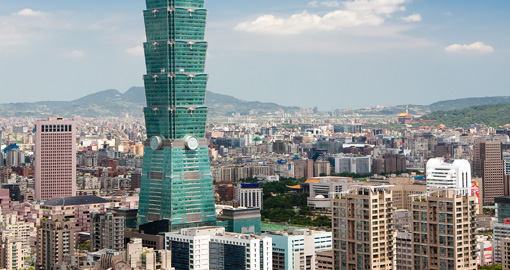 This is Taiwan’s tallest skyscraper and was the tallest building in the world until 2010. It measures 508 metres/1667 feet in height with 101 floors. It is home to a mix of offices, a multilevel shopping complex, food court and restaurants. It was designed to withstand earthquakes and typhoon-level winds. There is an indoor observation deck on the 88th and 89th floors and an outdoor one on the 91st floor all of which offer amazing 360-degree panoramic views of Taipei. The indoor observatory hosts a regular series of art exhibitions. 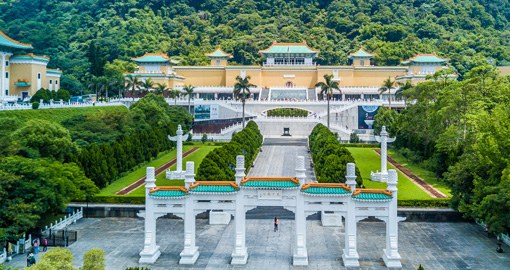 This is Taipei’s number one attraction due to its exceptional collection of Chinese art and artifacts. Many of the exhibits were once displayed in Beijing’s Forbidden City. They were moved to Taiwan in 1933 during the Chinese Civil War. The building itself is very impressive set in beautiful gardens at the foot of a hill. It contains a vast collection of Chinese treasures including paintings, calligraphy, bronzes, lacquerware, ceramics and jade. There are also sculptures, furniture, books and special exhibits. They range from Neolithic times to the end of the Chinese dynasties in the early 1900’s. 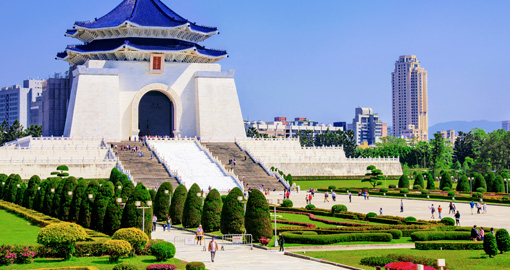 The National Chiang Kai-shek Memorial Hall is a national monument and a landmark in Liberty Square which was erected in memory of Chiang Kai-shek, the former President of the Republic of China. The monument is surrounded by a park and is framed on the north and south by the National Theater and National Concert Hall. It is octagonal in shape and white in colour with blue tiles and red accents. The eight sides represent the Chinese cultural symbol associated with fortune and wealth. There are two sets of 89 steps which represent Chiang Kai-shek’s age at the time of his death. They lead up to a large bronze statue of him which is protected by military personnel and changes hourly. Below the hall is a museum documenting his life and career as well as exhibits about Taiwan's history and the Republic of China’s development after moving to Taiwan. 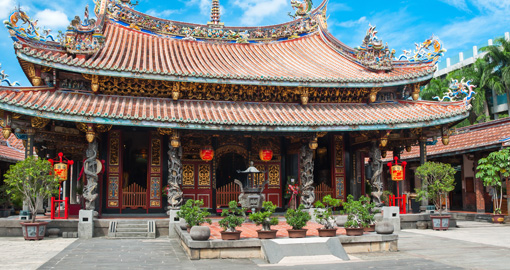 The temple is modelled after the original Confucius Temple in Qufu in Shandong Province, China. In the main hall of the temple, you can see a black plaque with gold lettering which was inscribed by Chiang Kai-shek that reads "Educate without Discrimination." Every year on September 28 (Confucius’ birthday), a ceremony with traditional music and dancing is held at the temple in honour of Confucius. It was originally built in 1879 during the Qing Dynasty but was demolished by the Japanese and rebuilt in 1930. Throughout the temple, there are informative displays on the history of Confucius, the temple and the Six Confucian Arts (such as archery and riding), many of which are interactive and fun. There are also free Confucius-themed shows in the movie house. 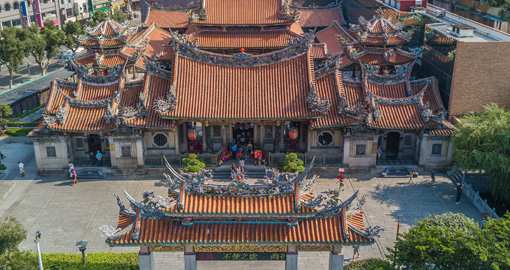 This the most well-known temple in Taiwan built in 1738 by settlers from Fujian Province in China. During World War II, the temple was badly damaged. It has subsequently been reconstructed and renovated. The people who worship here are a mixture of Buddhists and Taoists. It is one of the city's top religious sites and a place to explore Taiwan's vibrant folk faith and its unique temple arts and architecture. Longshan is dedicated to the Bodhisattva of mercy, Guanyin, though there are also over 100 other gods and goddesses worshipped in the rear and side halls. The best times to visit are around 6 am, 8 am and 5 pm when crowds of worshippers gather and engage in hypnotic chanting. Nearby are the Guangzhou Night Market and the Huaxi Night Market both located just west of the temple. 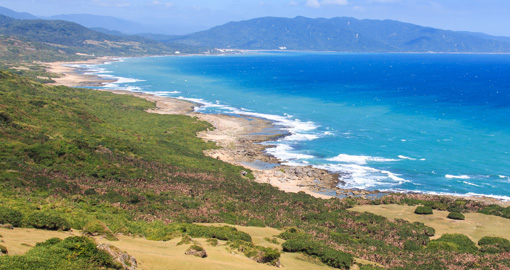 Kenting National Park is Taiwan's oldest and southernmost national park, covering the southernmost area of the Taiwan Island and is well known for its tropical climate and sunshine, scenic mountains and beaches. People come to swim, surf, snorkel and dive, visit museums and hike all-year-round. There are coral sea-cliffs with reefs along the west coast. The park features a large number of mountains in the north and coral tablelands and foothills in the south. The east side features unique sand rivers and sand waterfalls formed by the combined effects of winds and rivers as well as coral cliffs, sunken caves and stalactites. It is the only tropical botanical garden in Taiwan and is also one of the top 10 tropical botanical gardens in the world. There are thousands of tropical plants plus butterflies, birds, insects and reptiles. 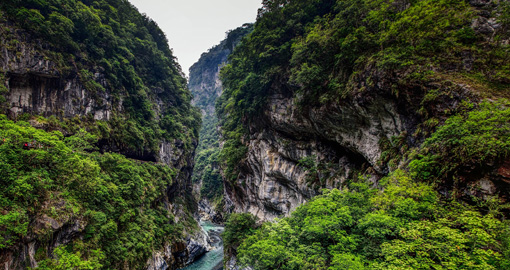 Taroko National Park is one of the nine national parks in Taiwan and was named after the Taroko Gorge an area well-known for its abundant supply of marble leading to its nickname, "The Marble Gorge". The rock now seen in Taroko is over 200 million years old. The gorge is an impressive 19 kilometre/12 mile long canyon situated near Taiwan's east coast. Here, in a short time, you can travel from rugged coastal cliffs through a maze of subtropical forested canyons to high elevation subalpine coniferous forests. The park has around 140 species of birds of which 10 percent are indigenous to Taiwan. It also home to over 30 large species of mammal including deer, boar, and bear, 25o species of butterflies, 30 species of reptile and 18 species of fish. 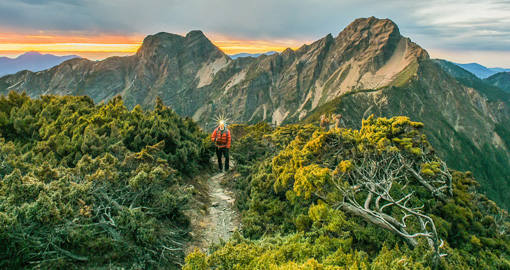 This park is named after Yushan which is the highest peak in the park and covers 3 percent of Taiwan. The park contains over thirty peaks more than 3000 metres/9650 feet in height. Two-thirds of the area within the park is above 2000 metres/6400 feet and there are many canyons, cliffs, and valleys. The landscape consists of rugged, thick forests, deep valleys, high cliffs and rocky peaks. This park is very popular with hikers and climbers. It is home to a large variety of birds, mammals, reptiles, amphibians, and butterflies. 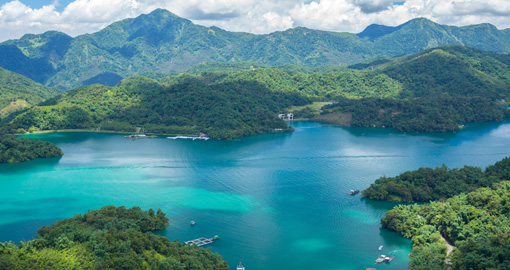 Sun Moon Lake is the largest body of water in Taiwan and surrounds a very small island. The east side of the lake resembles a sun and the west side, a moon, hence the name. The area around the lake is home to one of the aboriginal tribes of Taiwan, the Thao. Also surrounding the lake are many trails for hiking. The water is clear and sparkling blue colour. It has a picturesque backdrop of mountains and is a popular place for honeymooners. On one bank of the lake are the Wenwu Temple and the Ci-en Pagoda, built by Chiang Kai-shek in memory of his mother. There are several other temples on the shores of the lake. All these can be seen on an organized boat tour. It is possible to take the cable car overlooking the lake and experience stunning views. 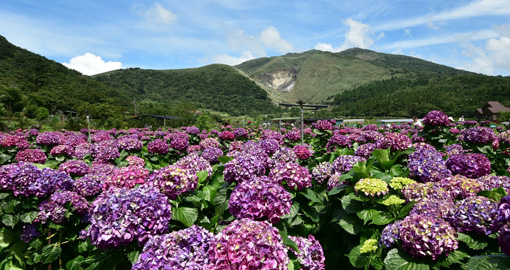 Yangmingshan National Park is located just outside of Taipei and is home to a number of parks, hiking trails, wildlife and hot springs, the last attraction being influenced by the Japanese hot springs. Each season brings different attractions. In February and March, the area is full of rhododendrons and cherry blossoms which cover the mountain slopes. In October, the colours are wonderful, especially the golden rd of the maple trees. The highest peak is Mount Qixing which can be seen from the city. Garden 91 is open to the public year-round offering a serene atmosphere together with breathtaking views of Taipei. There is an indoor complex containing unique rock sculptures and statues collected for decades from around China.