Prior to the European settlement of Australia, Australian Aborigines were among the oldest and most sustainable cultures on earth. It is believed that they arrived by boat from South East Asia during the last Ice Age, some 50,000 years ago. Comprised of 300 clans, 250 languages and 700 dialects, up to one million Aborigines lived in Australia before explorers came to settle the land.

The arrival of Europeans signaled a demise in the population of Australia’s first peoples. The diseases that came with explorers (and sometimes preceded them) proved fatal to many Aboriginals. This, coupled with suspicion and animosity against new settlers meant that many Aboriginals struggled to survive. Marriage between Aboriginals and Europeans as well as assimilation attempts proved difficult to overcome and resulted in a steady decline in population as well as drastic disruptions to the lives of those that survived.

The first authenticated European arrival in Australia was at the hands of Dutch explorer Willem Janszoon in 1606. This was followed by Abel Tasman in 1642 who became the first to reach Tasmania and New Zealand. During Tasman’s campaign, he was also the first person to properly map Australia, essentially paving the way for other pioneers to follow in his path. By the 1650s, thanks to Dutch exploration, a great deal of Australia’s coast was able to be charted, however, it remained relatively untouched by other European countries. 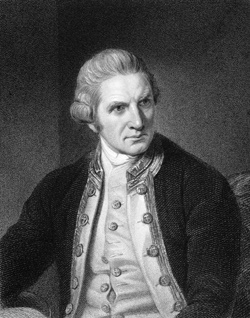 In April 1770, British explorer James Cook and the crew of Endeavour spotted the east coast of Australia and landed in Botany Bay. Chartering the east coast, Cook claimed it for Britain. It was decided that this new land would serve best as a penal colony. Eighteen years after Cook’s arrival, on 26 January 1788, the first fleet of eleven ships carrying around 1,500 people (half of which were convicts) arrived in present-day Sydney Harbour. Between 1788 and 1868 when penal transport concluded, approximately 160,000 men and women came to Australia as convicts.

By 1790, free settlers began to come to Australia, but it wasn’t until the 1820s that settlers truly began to experience some economic success. Soldiers, officers and emancipated convicts proved to be efficient farmers and this was reflected in crop production. News of this success spread to Britain where the more adventurous of the population decided to set sail for the new colony. Farming, along with the gold rushes of the 1850s ensured that a steady flow of men and women from Britain and prospectors from China continued to arrive in Australia.

By the late 1880s, Australia was no longer a colony of settlers, rather the majority of people were native to the continent. Australian art, literature and music, as well as the economic success of the gold rush, planted the seeds of nationalism eventually leading to the establishment of the Commonwealth of Australia in 1901.

As a member of the Commonwealth, Australia was not immune to the call to arms for both World Wars. Despite having a population of fewer than three million men, almost 400,000 volunteered to defend Britain. 60,000 people died, with tens of thousands injured by the end of the First World War. The campaign at Galapoli, while not considered a military success, served as an instrument in cementing a national Australian identity and has been described by some as “the founding moment of nationhood”. Many Australians also served during the Second World War, making a significant contribution to the Allied victory. The generation who survived this war was left with a sense of pride in their country’s abilities. On 25 April, ANZAC (Australian and New Zealand Army Corps) Day, Australians annually remember the dead from both wars.

In the post-war years, many people continued to immigrate to Australia from Europe and the Middle East. The 1950s saw the economy grow due to international demand for Australian goods (metal, wood, meat and wheat). The country was not unaffected by the revolutionary civil rights movement that seemed to be exploding everywhere during the 1960s. For Australia, this meant attempting to bridge the gap between the Aboriginal population and white Australians. The country voted yes in a 1967 referendum to include Aboriginals in the constitution.

In recent decades, Australia has continued to grow politically, economically and socially, coming into its own as a recognized international power.

At Goway we believe that a well-informed traveller is a safer traveller. With this in mind, we have compiled an easy-to-navigate travel information section dedicated to Australia.

Learn about the history and culture of Australia, the must-try food and drink, and what to pack in your suitcase. Read about Australia's nature and wildlife, weather and geography, along with 'Country Quickfacts' compiled by our travel experts. Our globetrotting tips, as well as our visa and health information, will help ensure you're properly prepared for a safe and enjoyable trip. The only way you could possibly learn more is by embarking on your journey and discovering Australia for yourself. Start exploring...book one of our Australia tours today!

Book your Australia tour with Goway!

With more than 250 Australia tours and experiences, Goway’s Downunder wizards can offer you many ways to explore and enjoy Australia. Choose from a simple city stopover, see the country highlights on one of our classic itineraries,  enjoy an Island stay, a self drive holiday, a Holiday of a Lifetime and more. We want to be your first choice when next you go globetrotting.