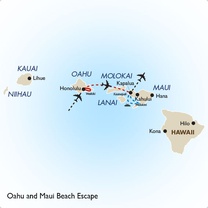 The “Big Island” or Hawaii is the youngest of the eight main islands. It is home to Mauna Kea which is the tallest mountain in the world if measured from below sea level. Mauna Loa and the Kilauea Volcano are also located on Hawaii with Kilauea being one of the most active shield volcanoes in the world.

Oahu was home to the Hawaiian royalty due to its natural harbour. The island is in the shape of a butterfly and is home to Diamond Head, the most famous volcano crater in the world.

Kaua’i is the oldest and wettest of the Hawaiian Islands. The Na Pali Coastline on the northwest side of the island was used in the filming of the original Jurassic Park movie.

Lanai is much more arid and dry than the other Hawaiian Islands. It only has one major settlement called Lanai City and is known as “Pineapple Island” due to its history as an island-wide pineapple plantation.

Maui is the second largest of the Hawaiian Islands and is characterised by lush rainforests and mountains. It is home to Haleakala, a young volcano that reaches 3,000 m (10,000ft) tall, making it one of the highest mountains in the world.

Molokai is renowned for its beautiful beaches. The sea cliffs found in Molokai and considered to be among the highest in the world and were part of the setting for the third Jurassic Park film.

Kahoolawe is the only island out of the eight major Hawaiian Islands that has no known inhabitants. Due to historical preservation, access can only be granted by the government for cultural or spiritual purposes.

Niihau is privately owned by one family (the Robinsons) and so commercial tourism is generally not allowed. As of 2009 there were only 130 inhabitants.