Things to do in Argentina

Every country has its outstanding and special attractions. Goway has selected its Top 14 Things to do in Argentina (not in any particular order) for you to enjoy on your visit to this destination. 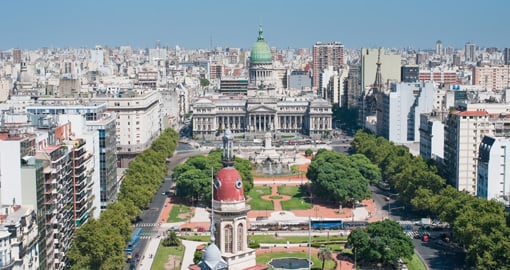 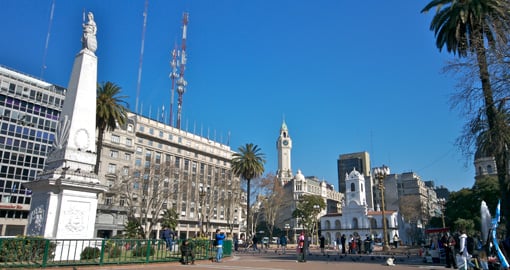 The Plaza de Mayo is the place where Argentines gather to demonstrate or celebrate. In the centre of this square is a white obelisk which represents Argentina’s independence from Spain in 1816. In the square are several important buildings such as the Cabildo (city hall), once a the seat of the city council, now a museum, the Metropolitan Cathedral, the Buenos Aires City Hall and the Bank of the Argentine Nation. 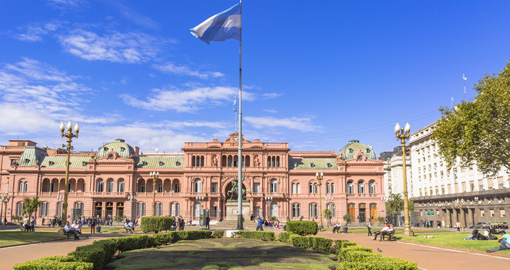 The Casa Rosada, close to the Plaza de Mayo and also known as the Pink House due to its distinctive colour, houses the President of Argentina’s offices. It was from the balcony here that Eva Peron (Evita) famously addressed the throngs of enthusiastic supporters jammed into the Plaza de Mayo. The building also houses a museum which contains objects relating to former presidents of Argentina. It has been declared a National Historic Monument of Argentina.

This is an impressive seven-story building and one of Buenos Aires’ most outstanding landmarks. It is the city’s main performing-arts venue and offers world-class opera, ballet and classical music. The acoustics here are exceptional. The present theatre opened in 1908 with Giuseppe Verdi's Aida. The Teatro Colon occupies an entire city block and can seat 2500 people provide standing room for another 500. The theatre’s interior is quite stunning. Backstage tours are available on trips to Argentina. 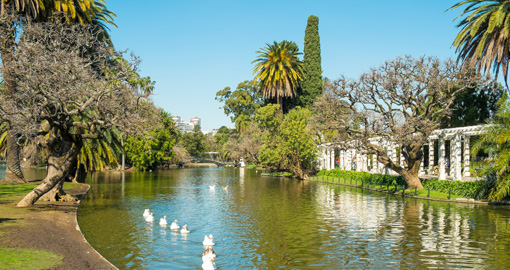 This park is also known as Bosques de Palermo (Palermo Woods) and is very attractive with small lakes, ponds and rose gardens. It is fairly large (400 hectares/990 acres) and many people use the park every day, both on foot and bicycle. There is a boating lake and a Poets' Garden with stone and bronze busts of renowned poets, including Jorge Luis Borges, Luigi Pirandello and William Shakespeare. The park also incorporates the Buenos Aires Zoo and a Japanese Garden, the world’s largest outside of Japan. 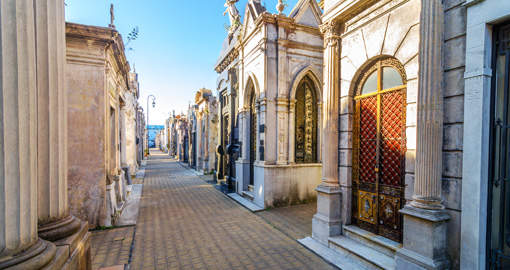 This cemetery is possibly the top attraction in Buenos Aires on an Argentina vacation. You can spend hours looking around this “city of the dead” It is lined with impressive statues and marble mausoleums, a journey through the history of its inhabitants which include past presidents, military heroes, influential politicians and the just plain rich and famous. The most famous is the mausoleum of Eva Peron where new flowers are continually placed anonymously. 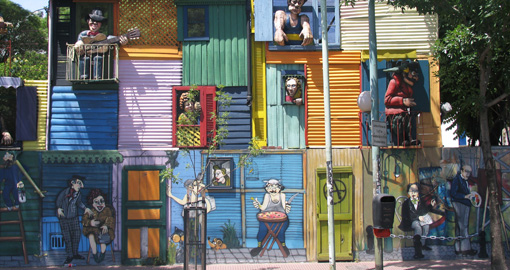 La Boca is a lively working-class neighbourhood in Buenos Aires where you can walk through colourful streets with interesting houses and performing musicians plus watch dancers displaying their Tango abilities. There are a number of arts and crafts stalls. La Boca retains a strong European flavour as many of its early settlers originated Italy. It is home to one of the most popular soccer stadiums in South America where Diego Maradona used to play. You can have a tour of the stadium and its memorabilia exhibition. 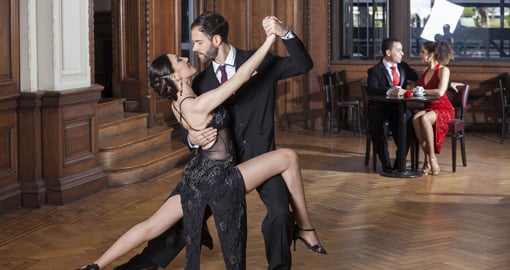 There are a number of clubs offering visitors an enjoyable tango show on Argentina tours. Try a tango dinner show with tango dancing lessons. It doesn't matter if you have a dancing partner or not as the important thing is to have the right attitude so that you don’t miss out. On Sunday evenings, the bandstand in Belgrano Park has free performances around 8 pm and earlier that day, you can participate in free tango lessons. 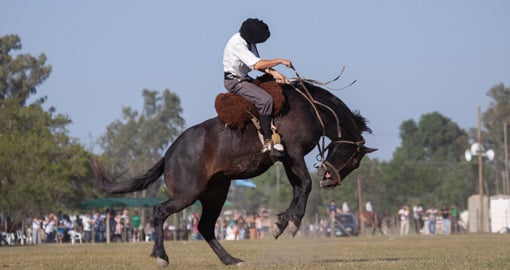 From Buenos Aires, you can travel on a tour through the Argentine pampas to Estancia Santa Susana. This traditional estancia (ranch) will provide you with a full day of gaucho fun. On arrival, you will be welcomed at the ranch pub with empanadas and wine. Also enjoy a horse-drawn carriage ride or go horseback riding to explore the grounds of the ranch. During lunch, yoyo will be entertained by a tango and folk show of classical music and dance, and watch an exciting boleadoras show, with throwing weapons used by gauchos. This is followed by a performance of their fantastic horse-riding skills. 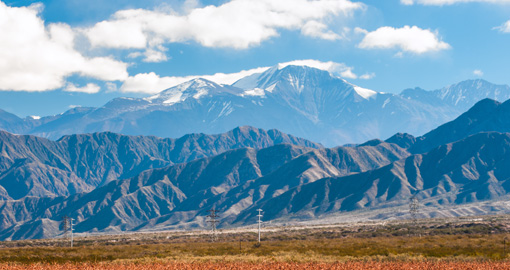 Scenic Mendoza is located in the heart of Argentina’s wine country and famous for its Malbec wines. It is also close to Aconcagua in the Andes, the highest mountain outside of the Himalayas at 6960 metres/22,830 feet in height. There are numerous wineries where you can have a tour and do some wine tasting. That is not all you can do in Mendoza. You can go trekking in the Aconcagua region and even climb the mountain on an organized arrangement; you can enjoy a spa treatment; you can visit the Reserva Natural Villavicencio which is teeming with wildlife; you can go horseback riding in the picturesque Valle de Uco and you can enjoy the Mercado Central which is a cornucopia of sights, aromas and activity. 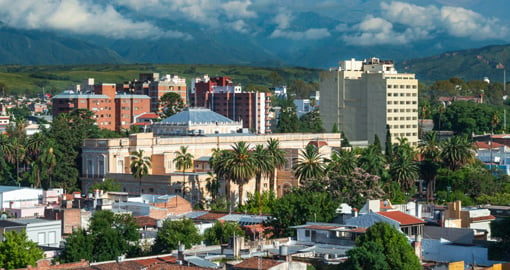 Salta is located in the foothills of the Andes Mountains in northern Argentina. Salta has a charm of its own and sights worth seeing on an Argentina vacation. It is one of the few places built in the Spanish colonial style. This can be seen in the 18th Century Cabildo (city hall) and its Cathedral. The beautiful surrounding scenery can be viewed from the San Bernardo Hill which is reached by cable car. The city's museums offer a wide range of artifacts and artwork from the native civilizations that flourished in the area. You can simply sit in the Plaza 9 de Julio and enjoy the town at an outdoor café or you can visit one of the clubs offering folkloric music. There are a number of good museums which include the High Mountain Archeology Museum, the Historical Museum and the History of Tobacco Museum among others. 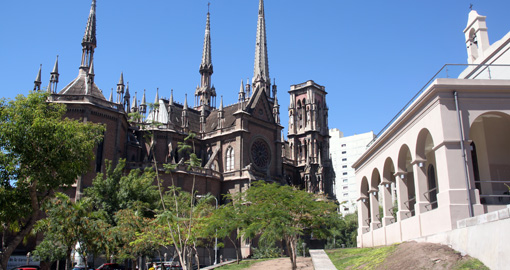 Cordoba is a city in the centre of Argentina and the second-most populated city in the country. It was one of the first Spanish colonial capitals in Argentina founded in 1553. The National University of Córdoba is the oldest university in Argentina. Cordoba has many historical monuments preserved from Spanish colonial days. The Jesuit Block is a UNESCO World Heritage site which is a group of buildings dating from the 17th Century, including the Colegio Nacional de Monserrat and the colonial university campus. There are also dozens of museums ranging from the Museo de la Ciudad (Cabildo) and museums featuring art, history, sciences plus a children's museum. 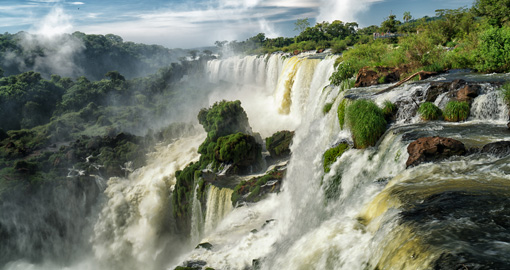 Iguazu Falls is shared by three different countries Argentina, Brazil and Paraguay. It has the largest average annual flow of water, more than any other waterfall in the world. It is recommended to spend at least a day on each side of Iguazu. About three-quarters of the total length of the falls are on the Argentinean side. The most impressive part of the falls is called the “Devil’s Throat” shared between both sides. It is a U-shaped cataract and half the river’s flow falls into it. You will see a huge amount of mist which can be seen from afar and hear the roar of the water pouring down. You can take a train running along the Argentinean side to where the mist and the roar are the most spectacular. Also, you can walk to the “Devil’s Throat” and take a boat ride underneath the falling waters. 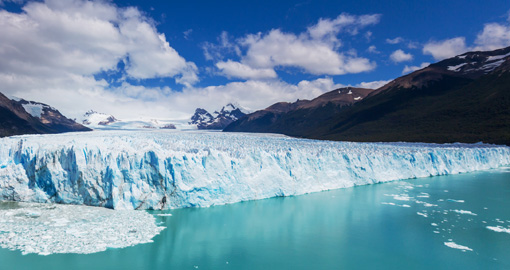 The Perito Moreno Glacier is a glacier located in the Los Glaciares National Park in Patagonia. This particular glacier is extremely large and is roughly 30 kilometres/19 miles in length. This ice field is the world's third largest reserve of fresh water. It is a two-hour bus ride from El Calafate where tours commence. A large visitor centre at the site features a walking circuit which allows visitors to view the southern flank and the east-facing edge of the glacier. The glacier is unusual in that it is advancing, while most glaciers worldwide are retreating. 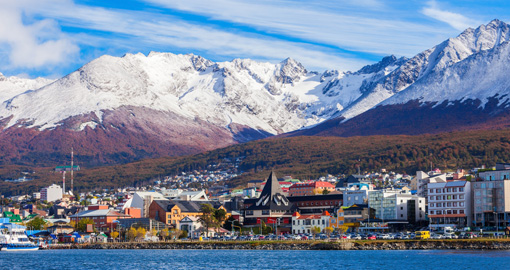 This is a land mass tagged on to the bottom of the country separated by the Straits of Magellan. The capital of the region is Ushuaia, the cruise gateway to the Antarctic and the southernmost city in the world. From Ushuaia, you can walk up to Glacier Martial just outside the town. You can visit the Harberton Ranch, an 1886 missionary pioneer home housing a laboratory for the study of sea mammals and birds. You can take a boat ride across the Beagle Channel to the Isla Martillo to view the large penguin colony.