Things to Do in Buenos Aires 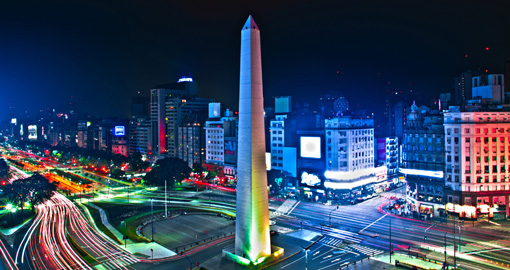 There’s something effortlessly cool about Buenos Aires. Whether it’s impeccably dressed Portenos, the revitalised neighbourhoods, the city’s obsession with culture, great food, and good living, or the passion that explodes whenever art, politics, or football enters the conversation. What Buenos Aires lacks in iconic tourist sights, it makes up for in lively entertainment and dining districts, warm, engaging people, and unforgettable experiences. Here are ten of the best to see or try while you’re in town.

Tango is the soundtrack of Buenos Aires, and no visit here is complete without enjoying it in some form. There are sumptuous ‘dinner and tango’ shows to be enjoyed if you want to watch the professionals, or just watch a couple dancing on the street in La Boca or San Telmo. By far the most immersive and enjoyable way to experience tango, however, is at a milonga, kicking up your heels with the locals. Unless you’re lucky enough to have a patient teacher, it’s probably best to choose one that offers a lesson beforehand. Otherwise, simply go for the atmosphere and to see a staple of local culture. Just beware of where your gaze lands. A lingering stare across the room is an invitation to dance! 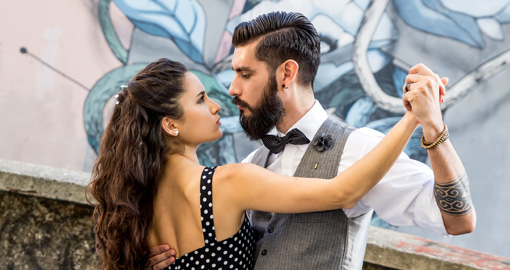 Steak and More on the Argentinean Table

It’s no exaggeration. Argentina has more cattle than people and is more than ready to spoil you with more delicious meat than you can ever hope to finish. But Argentinian cuisine has more to offer than succulent bife de chorizo and its many variations, or the classic accompanying Malbec. Indulge in a parilla or Argentinean barbecue, snack on tasty empanadas and choripan, sweeten things up with some dulce de leche, steel yourself for that first sip of mate, or make the most of the city’s extensive Italian influence. Thousands of miles from Italy, Buenos Aires will change the way you think about pizza and ice cream. Portenos’ passion for the theatre is second only to their passion for football. In fact, it might exceed it. But nowhere is their reverence for fine performing art more enshrined than at Teatro Colon. Buenos Aires’ great opera house is often ranked among the top opera venues in the world. The outside is bound to impress, but the inside is a visual feast that frames perfectly the world playing out on stage. The haunting mausoleums of Recoleta Cemetery possess an undeniable grandeur that perfectly fits this most moneyed of Buenos Aires neighbourhoods. A city of the dead in the truest sense, the Duarte tomb – Eva Peron’s final resting place – gets the lion’s share of tourist attention. But with a little knowledge of Argentina’s history and culture, a visit here is a walk through a veritable who’s who of the country’s most influential men and women. Every now and then, you find a touristy neighbourhood that’s really worth it. Colourful La Boca is one such neighbourhood. The old port of Buenos Aires, this working-class area received its colourful makeover in the 1950s, courtesy of local artist Quinquela Martin. The cobblestone street El Caminito was soon declared an open-air museum. To this day, it remains a great place to get a fun, if touristy taste of Argentina’s culture. Going beyond El Caminito offers a more authentic look at La Boca, but do so with an organised tour, and avoid walking through the neighbourhood after dark. La Boca has seen its share of economic struggle, and safety can be a concern. There are lots of reasons to visit historic San Telmo, but Sunday is the day this once posh, then working class, now increasingly middle-class neighbourhood comes alive with vendors selling all types of goods, particularly antiques. Take a leisurely breakfast, then stroll La Defensa and Plaza Dorrego (along with any other street the market has taken over), keeping an eye out for bargains and enjoying one of Buenos Aires’ most atmospheric barrios. Art is everywhere in Buenos Aires, from the stunning museums of Recoleta and Palermo, to the awesome steel construct that is Floralis Generica, which opens and closes with the sun. On Avenida 9 de Julio, see the smiling (upon the working class south) or angry (at the moneyed north) face of Eva Peron overlooking the city, or explore the ubiquitous graffiti creations at street level. Buenos Aires surrounds you with pretty things, no matter what your taste. MALBA, the city’s Latin American art museum is a favourite, but enjoy whatever kind of art interests you most. It’s a cliché to call Buenos Aires’ main square the heart and soul of Argentina…but it kind of is. To really to push the metaphor, rumours persist that the famed presidential palace, the Casa Rosada was painted with a mix of white paint and bull’s blood. Realistically though, if the palace is Argentina’s political heart, the Metropolitan Cathedral is its spiritual heart, now made even more famous by Pope Francis, South America’s first pope. Meanwhile, the Cabildo is Argentina’s historic heart, serving as the seat of the former colonial government. There’s no greater intersection of Argentina’s politics, faith, and history than Plaza de Mayo. Wander the Wilderness of Constanera Sur

How do Portenos stay fit, particularly after all that amazing food? For some, the trails around Costanera Sur Ecological Reserve help out a lot. For visitors, this is a great place to see Buenos Aires at play, surrounded by 865 acres of protected wetland that separates the city from Rio de la Plata. Hire a bike, walk, jog, relax by the river on the far side of the reserve, and recharge with a choripan alongside the locals when you’re done. Cheer on the Boca Juniors

Besides Caminito Street, there’s one big attraction pulling tourists into La Boca. La Bombonera is a pilgrimage for many football/soccer fans, particularly those who idolize Diego Maradona. Maradona is synonymous with Boca Juniors, the home team at La Bombonera, and a tour, or better yet, a seat at a home game at the stadium is always a thrilling experience for fans. Though not quite as ‘cheap’ as its reputation claims, Buenos Aires does offer excellent value for money, particularly for culture vultures. Foreign visitors are also exempt from the country’s VAT on hotels. Beware of outdated information about the ‘blue rate’ of exchange. Since December 2015, there’s been only one exchange rate, ensuring visitors get a fair rate everywhere. For that reason, ‘blue rate’ exchanges now offer little benefit and should be avoided. As for your budget, many of Buenos Aires’ most popular attractions are either very affordable or free, excluding upmarket dinners and tango shows, of course. An inexpensive local meal will cost around 300ARS, while a mid-range, 3-course dinner for two will hover around 1000ARS. A local beer or wine shouldn’t set you back much more than 80ARS, particularly in a local establishment. Note that credit cards are not accepted quite as widely as they are in North America, and many ATMs limit withdrawals on foreign cards to frustratingly low sums. Citibank ATMs are a bit more forgiving.

The sooner you adjust your evening schedule to Argentinean time, the better. Dinner before 10pm is the sure mark of a tourist, and nobody hits the bars before midnight. In fact, you might notice a certain laid-back approach to time in general. Be tolerant of (reasonable) delays. Don’t presume to know the political opinion of any local you meet. Former President Cristina Kirchner in particular is a wildly contentious figure. If you’re invited to sip mate with the locals, do not touch or wipe your bombilla (straw), lest you offend your host. Don’t worry about making a face, however. They know how it can taste to first timers! When ordering that all-important steak, know chorizo does not mean a spicy Mexican sausage here. It means sirloin, or a strip steak. Order it a punto for medium, jugoso for rare (or ‘juicy’), or a punto jugoso for medium-rare. Ask for bien hecho, and we can almost guarantee you and the chef won’t be friends. Finally, hopefully you won’t need it (and book travel insurance anyway), but emergency medical help is available to foreigners for free in Argentina.

Argentinean Spanish rarely fails to enchant and frustrate visitors, even those fluent in Spanish. Any form of Spanish will be enough to get by (and a decent percentage of locals speak English). You will, however, notice some regional differences. For example, the ‘ll’ sound pronounced as ‘y’ in most Spanish-speaking countries is pronounced ‘sh’ in Argentina. This becomes vitally important when you ask people to recommend a good parilla for that all-important barbecue dinner.